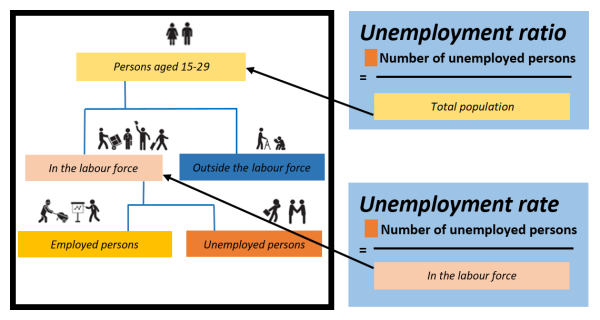 This article reports on unemployment of young people aged 15 to 29 in the European Union (EU), its Member States, three EFTA countries (Iceland, Norway and Switzerland) and one candidate country (Serbia). It explains how unemployment rates of this age category are affected by the transition of young adults from formal education to labour market.

Young people, according to the United Nations definition, refer for statistical purposes to the age group 15-24. However, the age category 15-29 also deserves attention as it is considered the reference in the Year of Youth context. For this reason, the current article presents information specifically for young people aged 15-29. However, some figures relate to people aged 15 to 34 to cover more extensively the transition from formal education to labour market.

A person's labour force status falls into one of the three categories: employed, unemployed or outside the labour force. Eurostat follows the employment and unemployment definitions from the International Labour Organisation (ILO). The labour force, which may also be referred to as the active population, consists of employed and unemployed persons. An employed person is a person who during a reference week (defined for the survey) performed work, even if just for one hour, for pay, profit or family gain, or had a job or business from which they were temporarily absent due to illness, holiday, industrial dispute or education and training. On the other hand, an unemployed person is not employed, is currently available for work and actively seeking work. A thorough explanation of these concepts is available in an article on the EU-LFS methodology.

The same definitions apply to young people as to any other age group. In 2021, EU-LFS counted 71.0 million young people aged 15-29 residing in the EU. Among them, 33.6 million were employed, and 5.0 million were unemployed. As those two groups offer their work in the labour market, they are considered part of the so-called labour force. Alternately, the remaining 32.4 million who were neither employed, nor unemployed comprised the group of people outside the labour force.

Figure 1 shows the long-term trend of the share of young people according to their labour status over the period from 2009 to 2021. Over that period, the consequences of two global crises are visible: the financial and economic crisis of the late 2000s and the more recent crisis triggered by the COVID-19 pandemic. Both crises caused a decrease in employment. However, the decrease in employment during the financial and economic crisis led primarily to an increase in unemployment (see years 2009 to 2013). By contrast, the decrease in employment during the COVID-19 crisis in 2020 was accompanied by a much higher increase in the proportion of people outside the labour force than in unemployment. 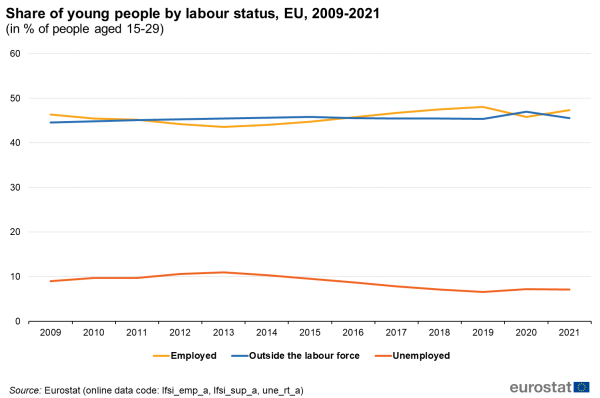 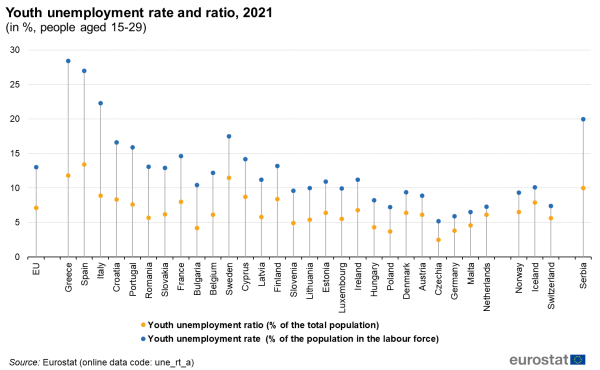 Figure 4 below shows the proportion of young people in formal education and/or in the labour force at each year of age from 15 to 34 (data for EU, 2021). All those who state they have been in formal education or training during the previous four weeks are considered as being a student or apprentice and are represented by a light colour shade (light blue, light orange or light reddish orange). Those not in formal education are coded in a darker colour shade. Each colour corresponds to a labour status (orange for employed, reddish orange for unemployed, and blue for outside the labour force). As can be seen from Figure 4, there is a steep rise in the labour force participation, from 5.2 % at age 15 to 73.2 % at age 24, 85.2 % at age of 29 and 86.4 % at age of 34. This steep increase explains the difference between the youth unemployment rates and youth unemployment ratios, introduced in the previous section. This is a distinctive feature of the young population and it has no equivalent at other ages, except for the gentle decrease in labour participation by older workers as they retire. 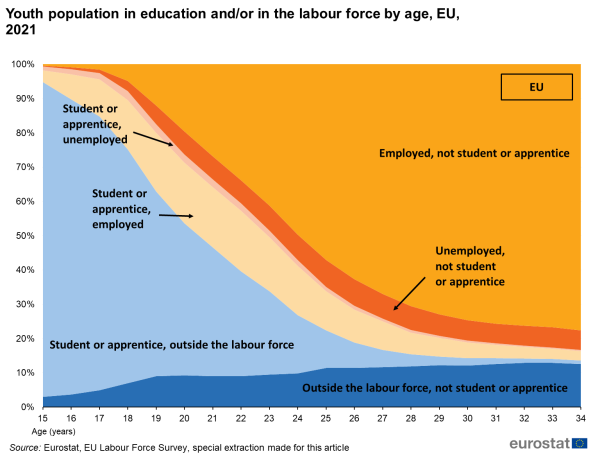 Figure 4: Youth population in education and or in the labour force by age, EU, 2021

Figure 4 is based on EU-LFS data and it counts all those who state they have been in formal education or training during the previous four weeks. It does not include people who exclusively participated in non-formal training sessions such as attending a course, a seminar or taking private lessons.

Source: The European Union Labour Force Survey (EU-LFS) is the largest European household sample survey providing quarterly and annual results on labour participation of people aged 15 to 89 as well as on persons outside the labour force. It covers residents in private households. Conscripts in military or community service are not included in the results. The EU-LFS is based on the same target populations and uses the same definitions in all countries, which means that the results are comparable between the countries. The EU-LFS is an important source of information about the situation and trends in the national and EU labour markets. Each quarter around 1.8 million interviews are conducted throughout the participating countries to obtain statistical information for some 100 variables. Due to the diversity of information and the large sample size, the EU-LFS is also an important source for other European statistics like Education statistics or Regional statistics.

Please note that Eurostat provides two sets of indicators, which serve different purposes and which in some cases differ from each other:

1) The LFS main indicators, which contain seasonally adjusted and break-corrected series. They include the labour market headline indicators used e.g. in the Macroeconomic Imbalance Procedure Scoreboard or the European Statistical Recovery Dashboard and are consequently used for monitoring policy. They have only a few breakdowns.

2) The detailed results, which contain series that are not seasonally adjusted and not break-corrected. They have a large number of breakdowns and can therefore be used for more detailed analysis.

This article presents annual results from the "LFS main indicators" set combined with ad hoc extractions from the LFS micro-data.

Coverage: The results from the EU-LFS currently cover all European Union Member States, the EFTA Member States Iceland, Norway and Switzerland, as well as the candidate countries Montenegro, North Macedonia, Serbia and Turkey. However, at the time of writing this article, 2021 EU-LFS data were not yet available for Montenegro, North Macedonia and Turkey. For Cyprus, the survey covers only the areas of Cyprus controlled by the Government of the Republic of Cyprus.

Monthly unemployment figures are published by Eurostat as rates (as a percentage of the labour force) or levels (in thousands), by sex and for two age groups (persons aged 15 to 24, and those aged 25 to 74). The figures are available as unadjusted, seasonally adjusted and as a trend series. The time series for data for the EU and the euro area (EA-19) aggregates start in 2000; the starting point for individual EU Member States varies.

Regulation (EU) 2019/1700 came into force on 1 January 2021 and induced a break in the EU-LFS time series for several EU Member States. In order to monitor the evolution of employment and unemployment despite of the break in the time series, Member States assessed the impact of the break in their country and computed impact factors or break corrected data for a set of indicators. Break corrected data are published on the Eurostat website for the LFS main indicators.

Young people are a priority for the European Union’s social vision, and the COVID-19 crisis further highlighted the need to sustain the young human capital.

The European Pillar of Social Rights sets out 20 key principles and rights essential for fair and well-functioning labour markets and social protection systems. Principle 4 (‘Active support to employment’) states that ‘young people have the right to continued education, apprenticeship, traineeship or a job offer of good standing within four months of becoming unemployed or leaving education’.

In October 2020, all EU countries have committed to the implementation of the reinforced Youth guarantee in a Council Recommendation which steps up the comprehensive job support available to young people across the EU and makes it more targeted and inclusive, also when it comes to the challenges caused by the COVID-19 pandemic.