Archive:Wood as a source of energy

Wood and wood products accounted for almost half (45 %) of the EU’s gross inland energy consumption of renewables in 2016.

Wood and wood products accounted for 6 % of the total energy consumed within the EU in 2016. 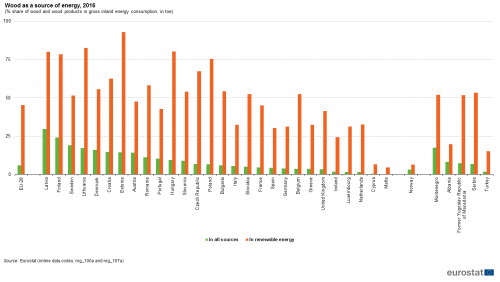 This article is part of a set of statistical articles that the Eurostat online publication "Agriculture, forestry and fishery statistics" and other publications are based on. It presents statistics on wood and energy in the European Union (EU).

The European Union (EU) accounts for approximately 5 % of the world’s forests and, contrary to what is happening in many other parts of the world, the forested area of the EU is slowly increasing. One of the ecological aspects of forests is their role as a renewable energy resource. This article presents statistics on the share of wood in the EU's energy consumption as well as the production and trade in wood pellets and other agglomerates (e.g. briquettes).

Fuel wood in the mix of renewables

Energy supply has always been one of the main uses for wood. Policy interest in energy security and renewable sources of energy, combined with relatively high oil and gas prices, has led in recent years to a reassessment of the possible use of wood as a source of energy. The use of renewables is enshrined in legally binding targets that have been set for each EU Member State concerning the role to be played by renewable energy sources through to 2020. The 2016 edition of the indicator report on the Europe 2020 strategy Smarter, greener, more inclusive? provides information on the progress being made towards the target of achieving a 20 % share of renewable energy in final energy consumption by 2020. This goal is designed to help reduce emissions, improve the security of energy supply and reduce dependence on energy imports. 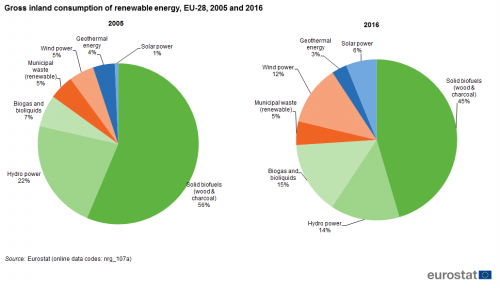 In many EU Member States, wood was the most important single source of energy from renewables. As shown in Figure 2, wood and wood products accounted for 6.0 % of the total energy consumed within the EU-28 in 2016. The share of wood and wood products in gross inland energy consumption ranged from over 20 % in Latvia and Finland down to less than 1 % in Cyprus and Malta. Wood was the source for more than three quarters of the renewable energy consumed in Estonia, Lithuania, Hungary, Latvia, Finland, and Poland. By contrast, the share of wood in the mix of renewables was relatively low in Cyprus and Malta (where the lowest share was reported, 4.5 %); this was also the case in Norway (6.4 %). 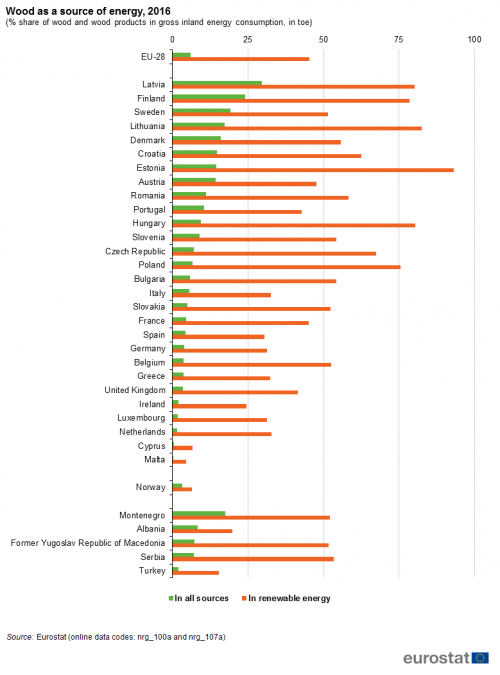 While the energy statistics on wood used as a renewable source include estimates for the private consumption in tonnes of oil equivalent (TOE), the physical data on removals of fuel wood from the EU's forests are probably under-reported in the Joint Forest Sector Questionnaire (JFSQ) - (see Wood products - production and trade). In 2016, three EU Member States (Slovakia, Sweden and Portugal) reported that over 90 % of their total roundwood production was industrial roundwood. In Cyprus, Greece (2014), the Netherlands, Italy (2015), Denmark and France over half of the roundwood produced in 2016 was fuel wood. For Hungary, Bulgaria, Croatia, Romania and Estonia the share of fuelwood varied between 32 % and 47 % of the roundwood production. In many EU Member States, however, no estimates of fuel wood consumption by households are included in the numbers reported in the JFSQ. Separate studies would be needed to produce them, because this wood may be acquired informally, including from forests owned by households. The JFSQ data show strong growth in the production and trade in wood pellets and other agglomerates in recent years (see Table 1 and Figure 3), but no corresponding increase in upstream fuel wood production. 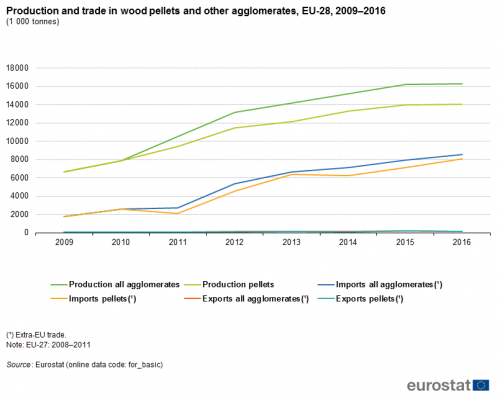 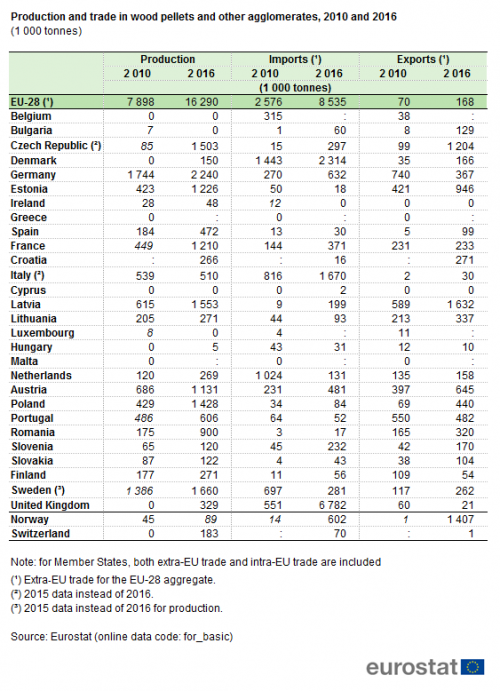 Production and trade in fuel wood

Although potential biomass supplies within most EU Member States are substantial, some countries import significant volumes of fuel wood as they seek to meet their renewable energy targets, raising concerns about the consequences this may have on the global sustainability of forests and resulting levels of carbon emissions. According to the COMEXT database, the EU's overall imports from non-EU countries - including logs, chips and particles, sawdust, wood waste and scrap, wood pellets, wood briquettes and similar forms - grew sharply between 2005 and 2017. The quantities increased by approximately 13 % to 41 million tonnes, while their value increased by 50 % to 12600 million EUR. The increase is clearly visible in the article on Wood products - production and trade (Figure 7). The overall price of these imports went from 234 Euro per tonne to 310 Euro per tonne in the same period.

Material use competes with energy use 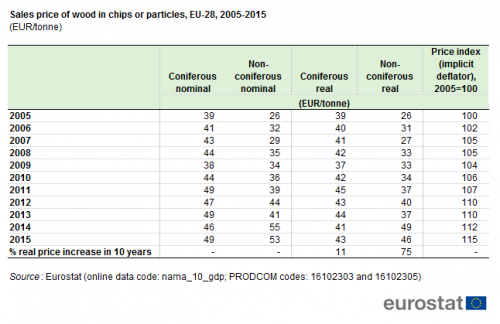 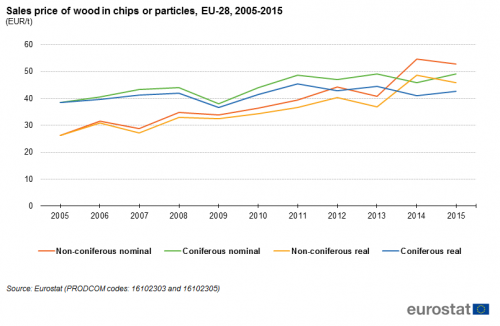 Eurostat, the Timber Committee of the United Nations Economic Commission for Europe (UNECE), Forestry Section of the United Nations Food and Agriculture Organisation (FAO) and the International Tropical Timber Organisation (ITTO) collect and collate statistics on the production and trade of wood through their Joint Forest Sector Questionnaire. Each partner collects data from a different part of the world; Eurostat is responsible for the data collection exercise pertaining to the EU Member States and EFTA countries.

The JFSQ provides data for supply balances of timber used for wood products and for energy, and for estimating the carbon contained in harvested wood products.

Renewable energy statistics are based on annual energy statistics defined in Regulation (EC) No 1099/2008 . All countries should include estimates of the consumption of energy from wood by households, using any method (survey is one of the options, modelling is also used).

A broad array of EU policies and initiatives have a bearing on forests. For several decades, environmental forest functions have attracted increasing attention — for example, in relation to the protection of biodiversity and, more recently, in the context of climate change impacts and energy policies. Apart from the traditional production of wood and other forest-based products, forests are increasingly valued for their environmental role and as a public amenity. The EU promotes sustainable forest management, aiming to

The European Commission presented a new EU forest strategy (COM(2013) 659) for forests and the forest-based sector in 2013, in response to the increasing demands put on forests and to significant societal and political changes that have affected forests over the last 15 years. The strategy is a framework for forest-related measures and is used to coordinate EU initiatives with the forest policies of the Member States. In March 2010, the European Commission adopted a Green paper on forest protection and information in the EU: preparing forests for climate change (COM(2010) 66 final). The paper aimed to stimulate debate concerning the way climate change modifies the terms of forest management and protection, and how EU policy should develop as a consequence.

Forestry, along with farming, remains crucial for land use and the management of natural resources in the EU’s rural areas, and as a basis for economic diversification in rural communities. Rural development policy is part of the EU’s common agricultural policy (CAP) which has been the main instrument for implementing forestry measures in recent years. In this context, it is estimated that spending on forest-related measures — through the European Agricultural Fund for Rural Development — amounted to EUR 9–10 billion during the period 2007–13.