Waste shipment statistics based on the European list of waste codes

Transboundary waste shipments are regulated by Regulation (EC) No 1013/2006 on waste shipments, commonly referred to as the Waste Shipment Regulation (WShipR). It implements the Basel Convention, which bans exports of hazardous waste from OECD to non-OECD countries. According to the regulation, all hazardous waste as well as some non-hazardous but problematic waste streams and other kinds of waste defined in the WShipR, must be notified to the authorities before being shipped across borders.

Article 51(1) of the WShipR states that, before the end of each calendar year, each Member State shall send the Commission a copy of the report for the previous calendar year which, in accordance with Article 13(3) of the Basel Convention, it has drawn up and submitted to the Convention Secretariat.

The shipment notification application form used in the EU is included as Annex VII of the WShipR. It asks for information on:

Information about notified shipped waste can be greatly improved when the Member States also indicate the European LoW codes in their reporting. This information provides more detail about the type and characteristic of the shipped waste. It can also be used to complement the reported data. For example, when no data on LoW are present for country A, LoW import-data from all other Member States can be used to estimate the export-data for country A. Similarly, reported export data from other countries can be used to estimate country A’s import data.

Germany imports a high quantity of hazardous waste and other notified waste and uses the European LoW code for this import. The German import data make it possible to calculate many of the missing export data for the other Member States that have not provided this information in their reporting.

Hazardous waste based on LoW

27 EU Member States exported a total of 7.8 million tonnes(env_wasship) of hazardous waste in 2018. In this context, the terms 'export' and 'import' are used for transboundary shipments of waste both within the EU and to other OECD countries. Hazardous-classification by LoW codes is often not the same as the official Y-codes used on the notifications. For example, a waste may be notified as hazardous under Y18, but no suitable hazardous LoW-code is available. In this case, the waste is included in the EU aggregate in the table env_wasship as hazardous, but appears as non-hazardous in the data based on LoW codes.

Turning to the LoW codes, the top 10 hazardous LoW codes cover 3.4 million tonnes and the top 20 cover 4.5 million tonnes (see Table 1). Comparing the quantities between the top Basel codes and top hazardous LoW codes, the top 13 LoW codes correspond to approximately the same quantity of exported hazardous waste as the top 10 Basel Y-codes. This clearly indicates that much additional information about the exported waste can be obtained by using the European LoW classification (consisting of 790 codes) compared with the Basel classification (120 codes). 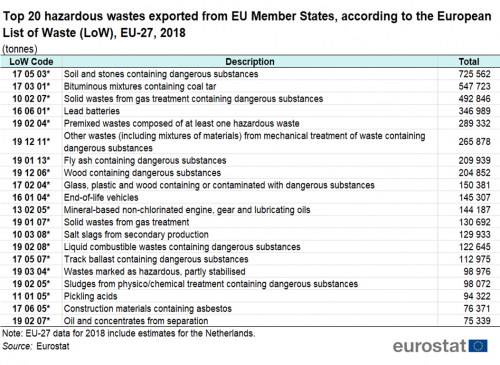 Construction and demolition wastes at the top

Wastes from waste incineration, such as fly ash containing hazardous substances (19 01 13*) and solid wastes from gas treatment (19 01 07*) also appeared in the top 20 list, as did solid wastes from gas treatment containing dangerous substances from the iron and steel industry (10 02 07*) and salt slags from secondary production from the aluminium industry (10 03 08*). Lead batteries (16 06 01*) are also exported in high quantities (fourth highest exported waste type).

Non-hazardous notified waste based on LoW

Again, wastes from waste treatment (LoW codes starting with 19) top the list. In particular, construction and demolition activities (LoW codes starting with LoW 17) account for a large share of the notified shipments of non-hazardous waste, especially soil and stones (17 05 04) and dredging spoil (17 05 06). There are also exports of large quantities of waste from the mechanical treatment of waste (LoW subchapter 19 12), including wood (19 12 07), other wastes from mechanical treatment (19 12 12) and combustible waste (19 12 10). Considerable quantities of mixed municipal waste (LoW 20 03 01) were also shipped from the EU-27 in 2018. 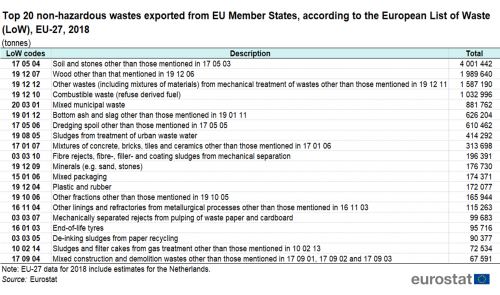 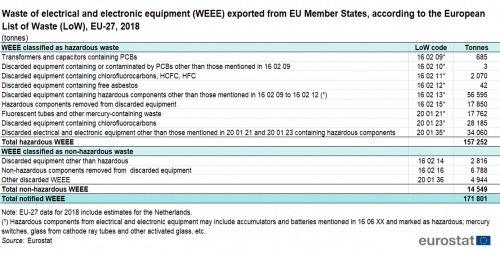 It is possible to link wastes identified by a European LoW code to the most common treatment that the waste is exported for and to identify the largest export and import countries for those waste types.

Table 4 shows the quantities of the top 10 hazardous waste types exported from EU Member States, classified according to the European LoW. It also shows the top 3 treatments for those wastes and the top 3 exporting and importing countries for the respective waste types.

The total of the three most common treatment types does normally not add up to the total amount of the exports of the waste type in question. For example, soil and stones containing dangerous substances (LoW code 17 05 03*) are shipped for different types of recovery and disposal operations. In 2018, 725 562 tonnes are identified as exports from the EU Member States, of which 206 170 tonnes are exported for D1 (deposit into or onto land, e.g. landfill), 168 459 tonnes for mixed treatment and 120 507 tonnes for D9 (other physico/chemical treatment, e.g. from evaporation, drying, calcination, neutralization, precipitation, etc.), adding up to 495 135 tonnes. The remaining 230 427 tonnes undergo other types of waste treatment. The treatment code ‘Mix’ means that, for the stated quantity, more than one treatment code has been allocated to the waste type in the reporting. The recovery (R) and disposal (D) codes refer to the operations included in Annex IA of the WShipR and Annexes I and II of the Waste Framework Directive 2008/98/EC.

Table 4 also shows the extent to which the shipped wastes undergo mostly homogenous treatment. In 2018, around 28 % of the exported soil and stones containing dangerous substances (LoW 17 05 03*) were land-filled (D1), 23 % underwent a mix of treatments and 17 % were treated by other physico/chemical treatments (D9).

Of the soil and stones containing dangerous substances, France with 186 833 tonnes and Luxembourg with 180 522 tonnes together stood for one half (26 % and 25 % respectively) of the total quantity of this waste shipped from the EU Member States in 2018. For imports, the Netherlands and Germany were the recipients for nearly all (87 %) of these exports, with the Netherlands being the destination for more than half of the total alone.

Solid wastes from gas treatment containing dangerous substances (LoW 10 02 07*) refers primarily to the treatment of bottom ash from the iron and steel industry. This is almost exclusively (95 %) treated in recycling operations for the recovery of metals and metal compounds (R4) found in this ash. The three biggest exporters in 2018 were Austria, Greece, and Belgium, who accounted for 19 %, 15 % and 11 % of the total shipped quantity from the EU Member States respectively. The waste was primarily sent to Germany, which treats one third (33 %) of the total exported quantity. 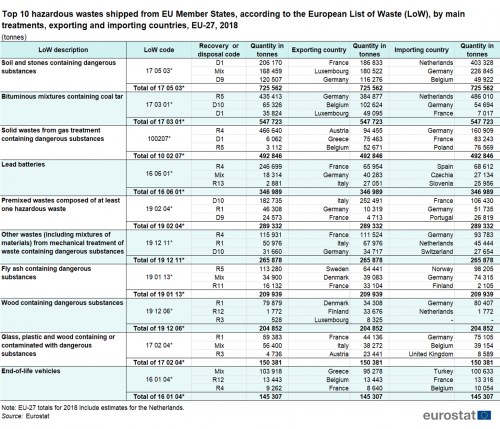 Table 5 shows the top 3 types of treatment and the top 3 export and import countries for the top 10 notified non-hazardous wastes in 2018. Belgium exported almost 2.1 million tonnes of soil and stones other than those containing hazardous substances (LoW code 17 05 04), generated as construction and demolition wastes (including excavated soil from contaminated sites). This waste was primarily exported for recycling and reclamation of inorganic materials (R5), with a share of 84 % of the total quantity of the shipments of this waste type.

Exports of soil and stones from Belgium represented more than one half (52 % of the total exports of this waste type, with Luxembourg providing close to one quarter (23 %). The Netherlands imported even more soil and stones than the quantity exported by Belgium, with almost 2.3 million tonnes (57 % of the total). The other key importing country for this waste type was France. 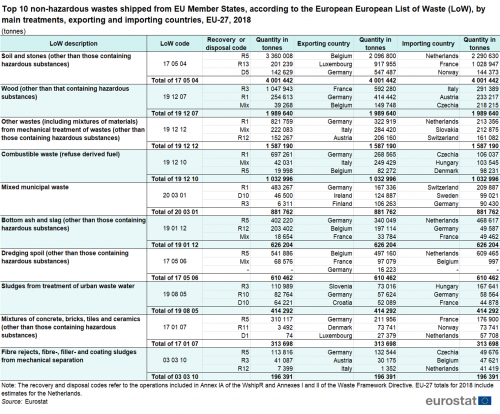 Using the codes of the European List of Waste (LoW) in addition to the Basel codes provides a much better understanding of transboundary waste shipments in Europe. The main extra information relates to:

The information based on the European LoW clearly shows that much of the waste shipped across borders is the result of better waste management and the reduction of landfilling. Mechanical sorting of mixed waste, recycling, composting, anaerobic digestion and incineration with energy recovery not only generate recyclable materials and energy, but also generate new waste types.

The generation of new waste types can be seen as a consequence of both EU and national measures introduced over the last decades. These stipulate certain minimum recycling and recovery requirements for different waste types. The EU has introduced minimum recycling and recovery requirements for household and construction and demolition waste in the Waste Framework Directive (2008/98/EC), for packaging waste in the Packaging and Packaging Waste Directive (94/62/EC) and for electrical and electronic waste in the Directive 2012/19/EU.

It has also introduced ambitious emission requirements for industrial and waste treatment plants. The Industrial Emissions Directive (2010/75/EU) requires people involved in carrying out industrial and agricultural activities - including incineration of waste - with a high pollution risk to obtain a permit. This permit can only be issued if certain environmental conditions are met. The Urban Waste Water Treatment Directive is also an important piece of EU legislation in this regard. However, more ambitious requirements often generate more flue-gas cleaning wastes or sewage sludge. These wastes must also be properly treated.