Authors of statistical publications face the challenge of finding a good balance between accuracy and readability. In this perspective, reporting numbers to the last available digit is not reasonable because it makes grasping relevant information difficult and may give a false impression about the actual accuracy of data. For this reason, rounding both large numbers and long decimals makes publications better readable and avoids spurious accuracy.[1][2][3]

While the Common editorial guidelines for Eurostat publications[4] have already a paragraph about rounding of numbers, more comprehensive guidelines are needed as the Dissemination unit is increasingly confronted with requests on this matter from authors, contractors and practitioners in other statistical organisations.

The most appropriate rounding policy depends on the context of the publication and the statistical domain being treated, and it is therefore difficult to formulate universal rules. Nevertheless, this document aims at harmonising practices and providing simple recommendations for publications targeted to a general public of non-specialists.

The general recommendations apply to all communication elements of statistical publications (texts, tables, graphs and maps):

Due to rounding, some totals may not correspond with the sum of the separate figures.

The specific recommendations are based on three increasing levels of approximation: while detailed figures from data sources (e.g. Eurobase) should not be changed when preparing graphs and maps (level 0), they should be partially rounded for compiling tables (level 1) and rounded even further when writing texts (level 2).

The assessment whether a target has been met should be done on the bases of unrounded figures (and properly reflecting the accuracy of the data).

If the table presents relative quantities such as percentages and proportions, rounding to one decimal should be applied. However, when values are generally higher than 70 %, no decimal would be used. On the other hand, for some indicators, like monthly changes, keeping more than one decimal might be needed.

When compiling a table with absolute numbers, identify the “shortest” number (in terms of number of digits) and decide which significant digits to keep (two are in general sufficient), then round all other entries to those digits. In this way the rounded total will be consistent with the sum of the rounded addends (except for small rounding differences).

For exchange rates showing the decimals is however important.

If several indicators are presented in the same table, try to keep the same number of significant digits at one side for all absolute figures, and at the other side for all relative quantities.

When precision is not strictly needed, envisage grouping countries (or other statistical units) and describe their characteristics with wording such as “at least”, ”about”, “less than”, etc. In order to do so, do the regrouping by using unrounded numbers and then do the rounding. It may be necessary to reconsider the text after the rounding as close numbers may end up in the same rounded number.

In the case of target indicators or thresholds, use the maximum precision to rank countries towards the target/threshold (above or under).

When analysing absolute numbers, keeping the same number of significant digits for countries of different size may eventually result in keeping different significant positions. These inconsistencies are not of concern in texts as their primary function is the communication of concepts.

When reporting totals, do not add up rounded addends, but add unrounded numbers or percentages and round the total.

As a consequence of the general rule, the advice for relative quantities such as percentages and proportions is to report in text one decimal for percentages below 10 %, no decimals for figures above 20 %, and for percentages between 10 and 20 % the choice between one or no decimal depends on the precision of the indicator.

Recommendations illustrated with an example

Luxembourg shows the smallest figure; keeping two significant digits implies rounding to the “ten-thousands” position, i.e. to 340 000. By rounding all other numbers to this position we obtain the table:

Even though the proposed rounding scheme reduces the possibility of inconsistencies between the sum of rounded numbers and the rounded sum, small differences could still occur. In this case, it is important to report the disclaimer described above (general recommendations number 6).

Consider the same population dataset as above. By keeping two significant digits, population in Germany rounds to 61 000 000, in Belgium to 9 700 000 and in Luxembourg to 340 000. The significant positions clearly differ in these three numbers; however this is generally not a problem in texts.

The following is a good example of how to present analysis of numbers reported in a table. In the accompanying text, countries are regrouped and rounded figures are used. 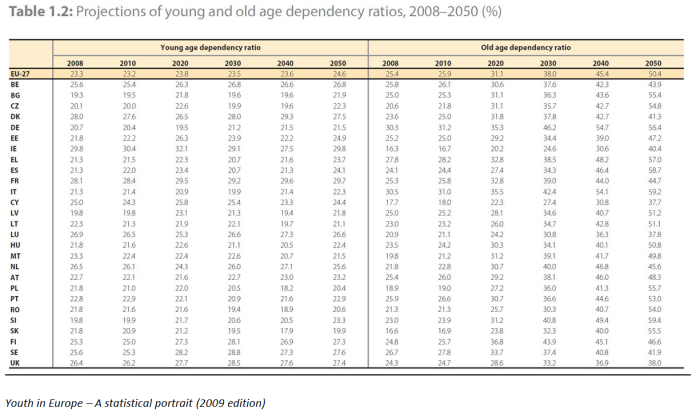 Example of numbers in text with too many digits

Consider the following example of text:

The figures in this text are too much detailed (up to four significant digits) and it is difficult for the reader to retain the main messages. Original numbers should be rounded to two digits only.

Note that the rounding above must be done on the most detailed available figures for increased consistency.

Reconsider the population dataset introduced in the first table. If instead of applying the above mentioned recommendation for tables, we had kept the same number of significant digits in all figures in the table, we would not have achieved the same level of coherence. For instance, with two significance digits we have

We have already seen that the correct scheme consists in rounding all figures to the “ten of thousand” position. Apart from the second table, the following two alternative tables correctly represent the data:

As background information, this section describes the current practices for tables and datasets in Eurobase (the database of Eurostat).

There is no intervention from the unit reponsible of Eurobase in the number of decimals of data sent by the production unit.

Example of derived dataset with rounding: yth_demo_010 - Child and youth population on 1 January by sex and age. The dataset adds different data series from demo_pjangroup and the number of decimals is zero.

Derived datasets with calculation are really exception in Eurobase.

There are cases in the database where the same indicator has different number of decimals within the same dataset, and then the unit reponsible of Eurobase always asks the Domain Manager to try to avoid this situation.