Tourism statistics - impact of Covid-19 on trips of Europeans

In 2020, 51 million fewer residents of the European Union made tourism trips (for personal purposes). While in the year before the pandemic 243 million Europeans made at least one tourism trip with overnights stays in the course of the year, this number dropped by 21% to 193 million in the year 2020 (see article on Participation in tourism). Expressed as a share of the population (aged 15 or over), 52 % participated in tourism in 2020, down from 65 % in 2019.

This article looks at the impact of the Covid-19 pandemic on the volume of trips made by Europeans and how the characteristics of those trips, for instance destination or type of accommodation, were affected, focusing on the first year of the pandemic (2020). 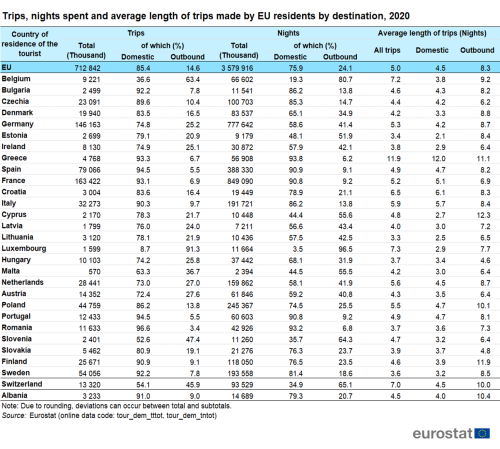 The impact of Covid-19 at country level is shown in Figure 7, comparing the number of trips made in 2019 and 2020. The biggest drops were observed for residents of Slovakia, Latvia, Ireland and Slovenia, with less than half as many trips in 2020. On the other hand, in Sweden the impact was minimal with only 2 % fewer trips made by its residents, mainly because of a significant increase of 35 % in the number of domestic trips. Sharp increases in domestic trips were also recorded in Malta (+52%) and Luxembourg (four times higher, but still relatively unimportant compared with the volume of outbound trips). The pattern in Figure 7 shows that, across all countries, the impact of the pandemic on tourism trips was much heavier for outbound tourism than for domestic tourism. 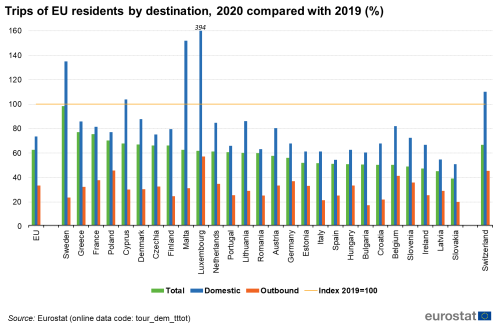 EU residents made a total of 3.6 billion overnight stays during tourism trips in 2020. More than half of these nights (54 %) were spent in non-rented accommodation, which was an unusually high share compared to pre-pandemic levels (44 % in 2019). Figure 8 and Figure 9 look at the distribution of the tourism nights by choice of accommodation in 2019 and in 2020. At EU level, in 2020 the biggest share of nights (35 % vs 28 % in 2019) were spent in accommodation provided by relatives or friends. Nights spent in own holiday homes also went up from 13 % to 17 %. This can indicate that tourists preferred accommodation options with people they know or with fewer people around. This observation is supported by the drop in the share of nights spent in hotels or similar accommodation (from 32 % in 2019 to 20 % in 2020). 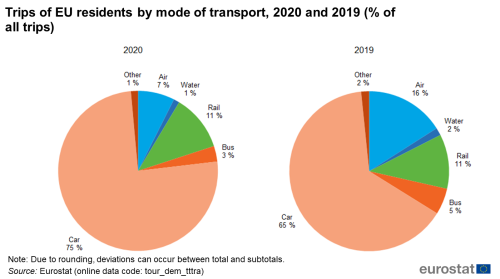 The shift to travelling by car instead of airplane was even more significant in the segment of long trips (see Figure 11); in 2020, 73 % of long trips were made by car while this share was 55 % in 2019. The shift towards destinations closer to home, for instance domestic trips rather than outbound trips, most likely explains the drop in air travel, jointly with concerns about distancing rules in shared modes of transport. 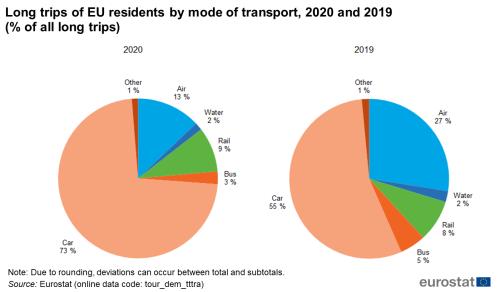 In terms of number of trips, Austria was the top foreign destination for EU residents in 2020, while in terms of nights spent, Spain was on top

As discussed above, Europeans turned to domestic tourism in 2020. Figures 12 and 13 show that the shares of trips to all destinations abroad decreased compared with 2019. On average for the EU, 15 % of all trips were made in a foreign country: more than 11 % in another EU Member State and just over 3 % outside the EU. One year earlier, this was 20 % and 8 % respectively.

In terms of number of trips, Austria was the number one foreign destination for EU residents (10.6 million trips, see Table 2), possibly because of the winter season at the beginning of 2020, just before tourism came to a stop in March 2020. In terms of number of nights spent, Spain was on top (92.2 million nights spent). 10 % of all outbound trips made by Europeans were spent in Austria, followed by Italy and Germany (8 % each), while 11 % of tourism nights were spent in Spain, followed by France (9 %) and Austria (8%).

A neighbouring or nearby country has always been a popular foreign destination for trips of nearly all European tourists. However, in 2020, the proximity of the destination became more important (see Table 3 in the excel file).

In 2020, Europeans spent less than half of what they had spent on their trips in 2019

These closing paragraphs look at tourism spending by EU residents living in the euro area. Tourists from those 19 Member States spent €215 billion less on tourism trips, with tourism expenditure down from €396 billion in 2019 to €181 billion in 2020. 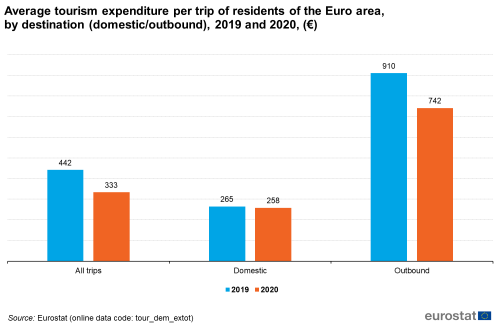 Figure 14: Average tourism expenditure per trip of residents of the Euro area, by destination (domestic/outbound), 2019 and 2020, (EUR)
Source: Eurostat (tour_dem_extot)

Tourists from euro area countries spent relatively more in their own economies in 2020 compared with 2019, with domestic tourism accounting for 65 % of all tourism expenditure (up from 44 % - see Figure 15 and Figure 16). Notwithstanding this comparative advantage, total expenditure on domestic tourism decreased in 2020 (-29 % for accommodation, -35 % for transport, -31 % for other expenditure), but less dramatically than the absolute values for expenditure on outbound trips (respectively -72 %, -73 % and -70 % - see Figure 17). 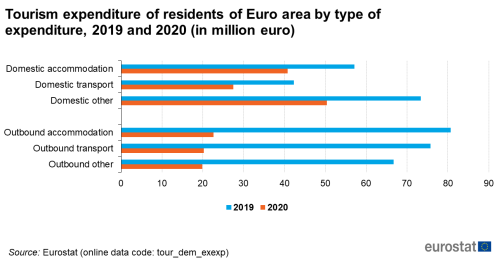 Figure 17: Tourism expenditure of residents of Euro area by type of expenditure, 2019 and 2020 (in million euro)
Source: Eurostat (tour_dem_exexp)