This article presents recent statistics on the tourism industries in the European Union (EU-27). While tourism statistics focus on either the accommodation sector or the demand side (from households), and relate mainly to physical flows (arrivals or nights spent at tourist accommodation or trips made by residents of a country), this analysis is based on economic data extracted from other areas of official statistics, in particular structural business statistics (SBS) and short-term business statistics (STS). Thus a more complete economic analysis of this sector can be drawn, which is an important motor for many countries' economies and labour markets.

The publication "International Recommendations for Tourism Statistics 2008" lists ten internationally comparable activities and two country-specific ones for the tourism sector, also called "tourism industries" or "tourism characteristic activities". This article focuses on a subset of these that has relevance for the EU (the other activities proved to be of limited relevance for European tourism or have limited coverage in SBS).

The reader is strongly encouraged to consult the "Data sources" section before using the presented data, in order to avoid overestimating or underestimating the economic importance of tourism for some industries.

The discussion below refers to four selected indicators: number of enterprises, number of persons employed, turnover and value added at factor cost – firstly at EU level, secondly at country level. 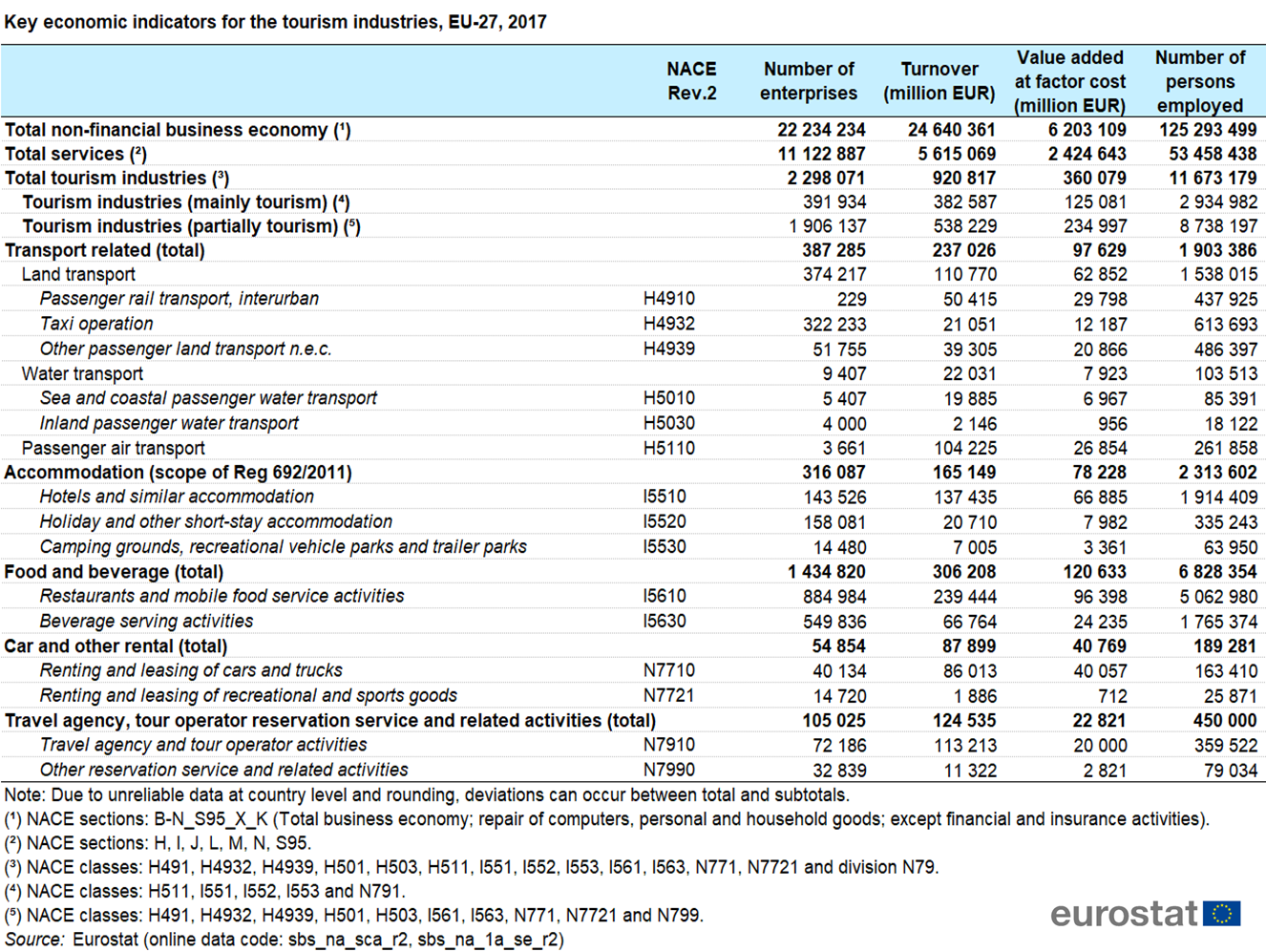 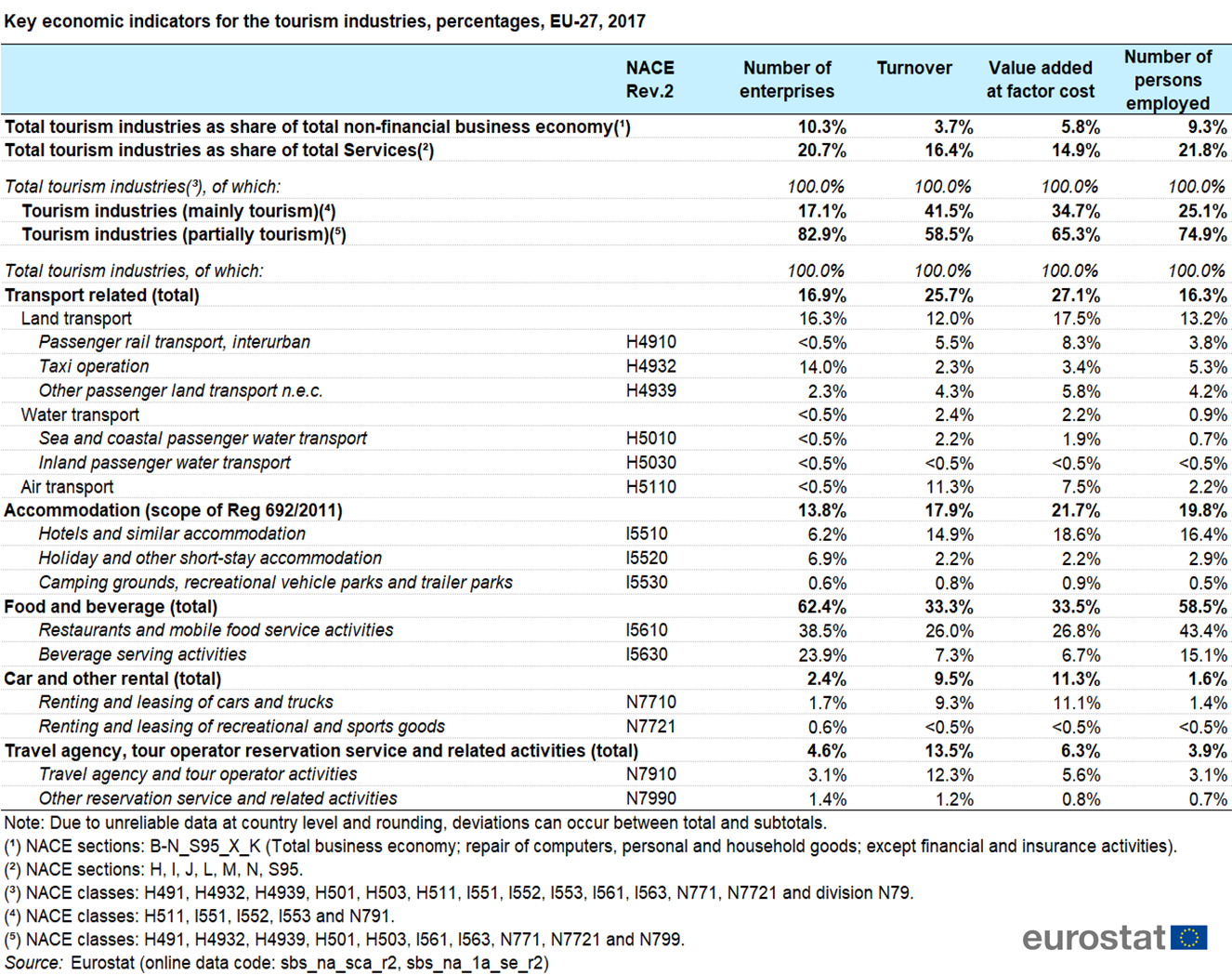 As explained in the "Data sources" section, tourism industries do not provide services only to tourists. Their employment, turnover, etc. is also related to services provided to non-tourists. In Tables 1 and 2, the subdivision “mainly tourism” and “partially tourism” takes this into account. For instance, 2.9 million persons are employed in industries that are assumed to serve predominantly tourists while 8.7 million persons are employed in industries where the customers are likely to be a mix of tourists and non-tourists (e.g. restaurants).

Figure 1 presents the growth of the sectors from 2012 to 2017. Tourism industries (mainly and partially) showed a stronger growth than the total economy for all indicators concerned. Looking at those industries that are 'mainly tourism' the value added recorded a growth of +38 % between 2012 and 2017, the number of enterprises grew by +23 %, the turnover by +17 % and the number of persons employed by +13 % (for the total economy the corresponding growth rates were +20 %, +7 %, +10 % and +8 % respectively). 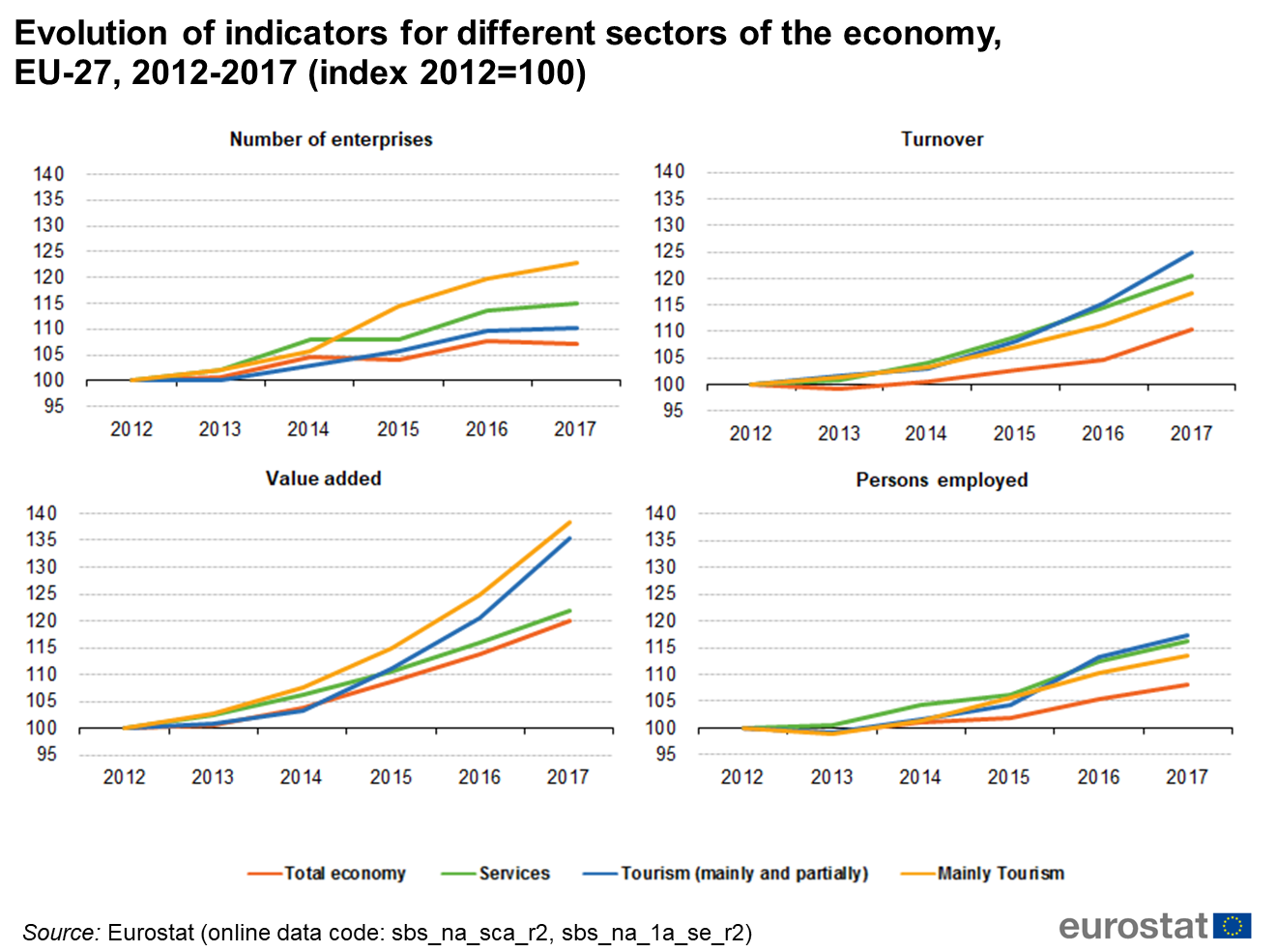 More than three out of four enterprises in the tourism industries operated in accommodation (NACE I55) or food and beverage serving activities (NACE I56): 14 % and 62 % respectively (see Table 1, Table 2, Figure 2). Looking at the number of persons employed, the weight of these activities was nearly four out of five persons employed in the tourism industries (78 %). However, in terms of turnover and value added, their share was much lower (51 % of turnover, 56 % of value added). 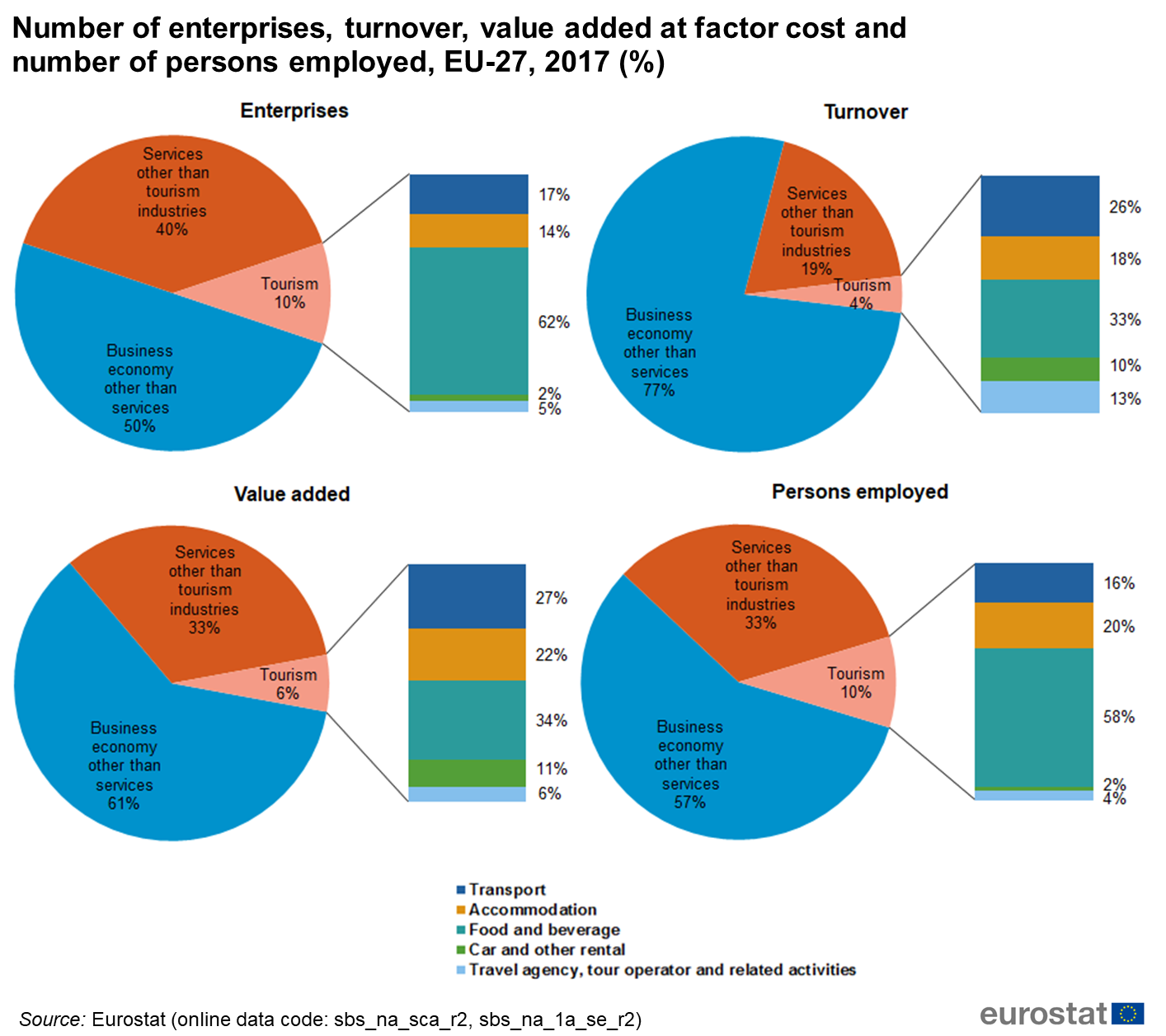 Travel agencies and tour operators (NACE N7910) and other related activities (NACE N7990) recorded a turnover of 125 billion euro in 2017. These activities represented 13 % of the turnover in tourism industries, compared with a 6 % share in value added at factor cost and a 4 % share in employment and in number of enterprises. 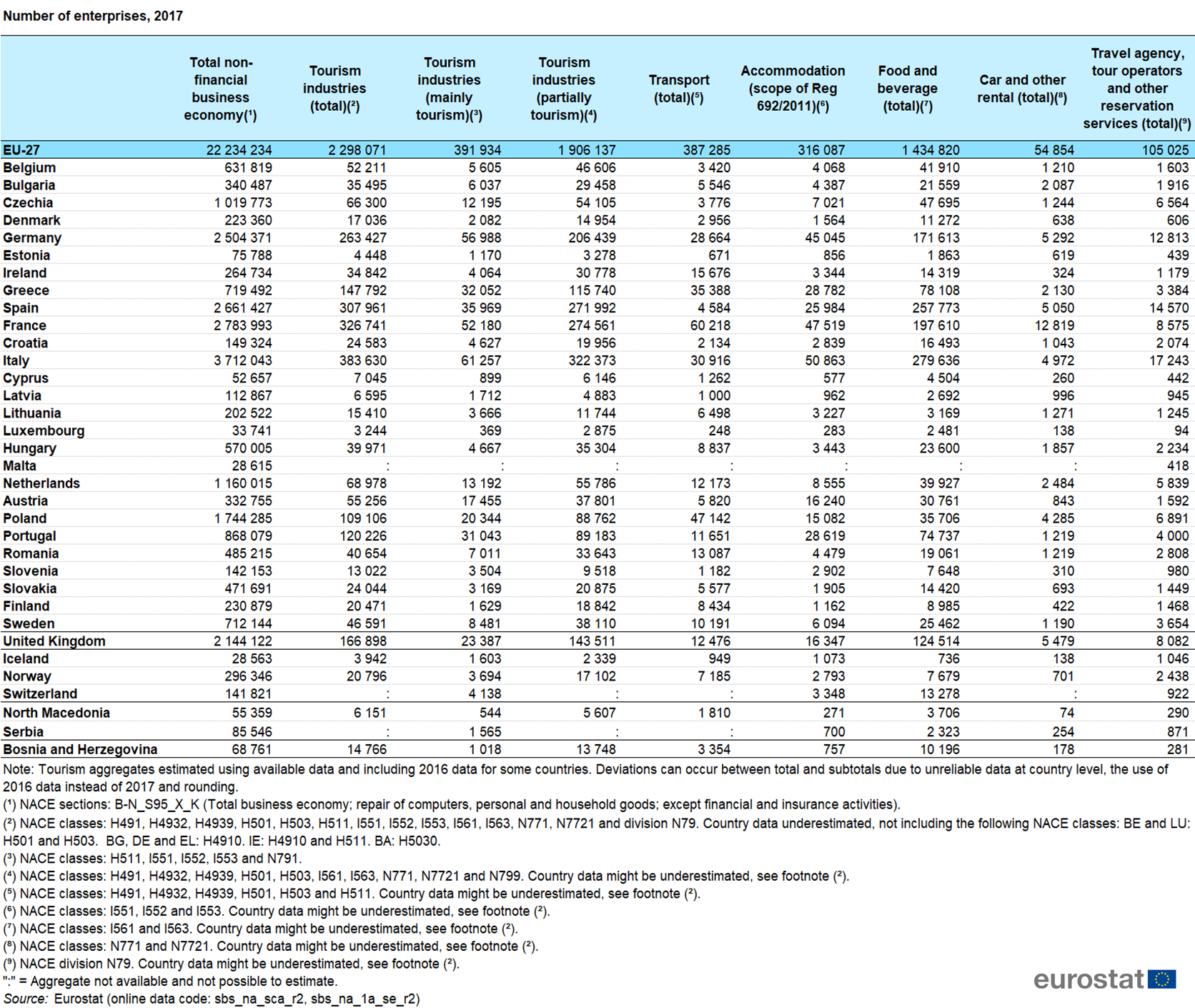 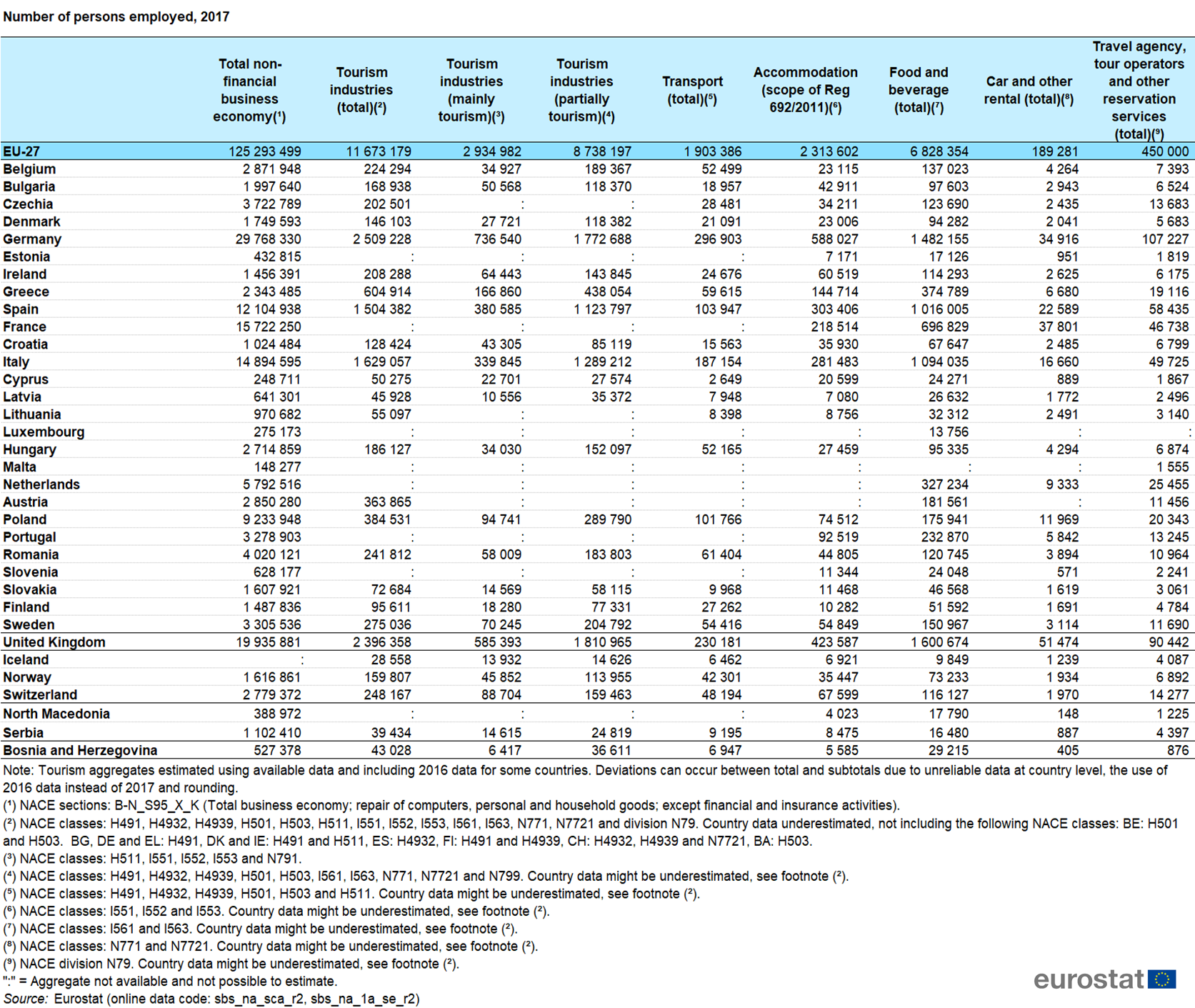 The availability of country data on turnover and value added is also fragmented (see Table 5, Table 6).

For France, value added amounted to EUR 78 billion while the highest shares of value added in the tourism industries in the total non-financial business economy of the country were observed in Cyprus, Greece and Croatia (all above 10 %). 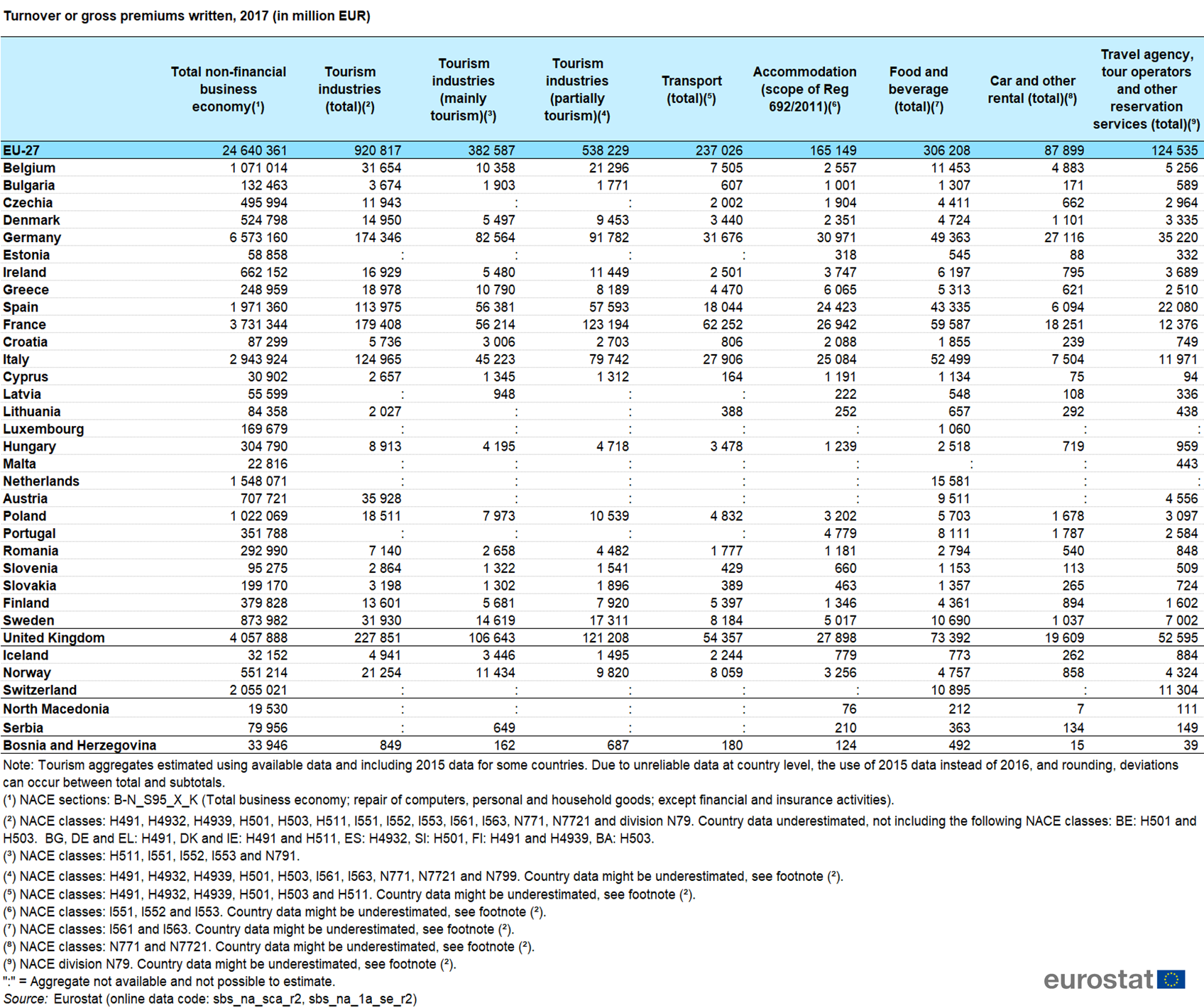 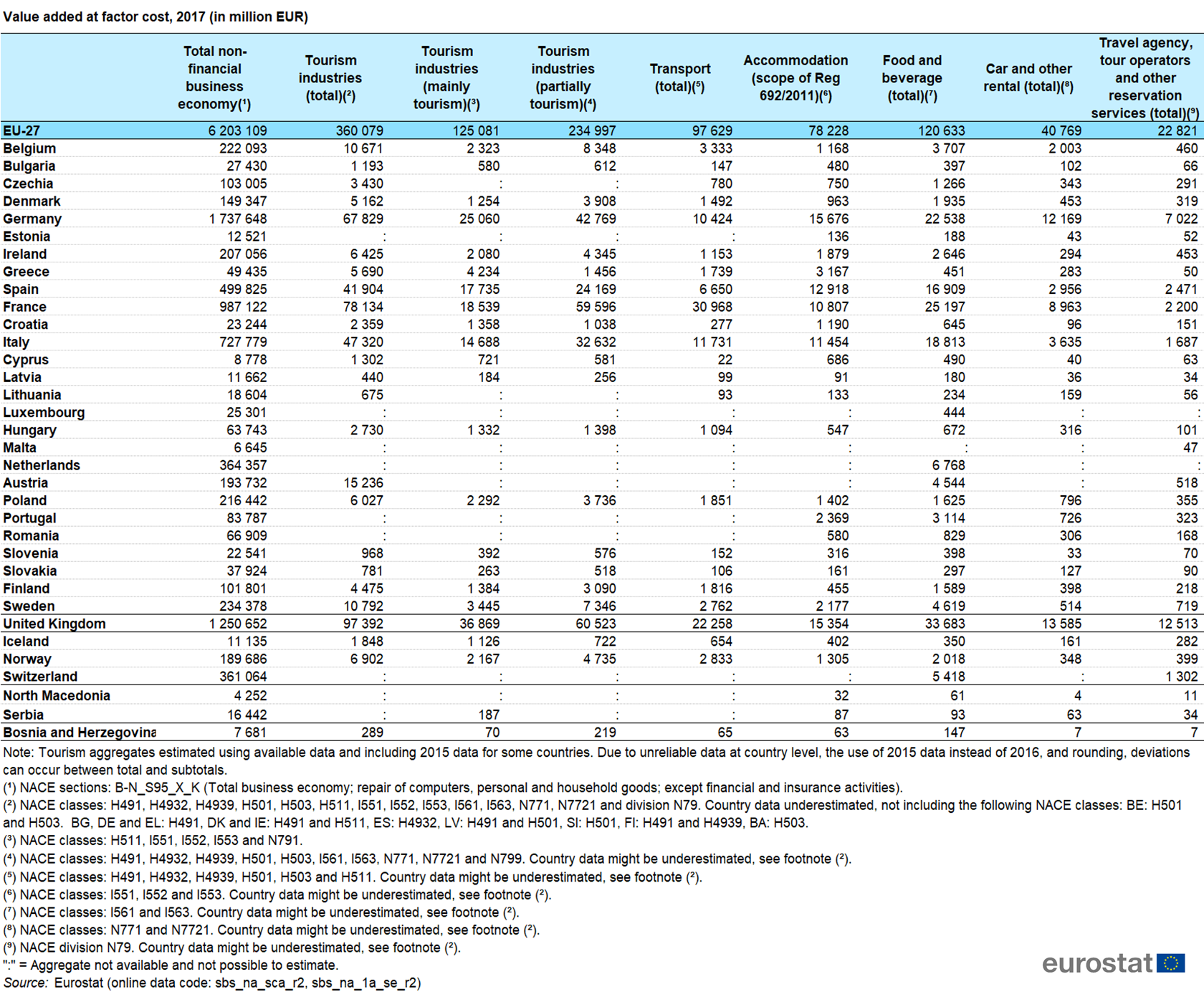 The above analysis was based on structural business statistics (SBS). While SBS is a rich and comprehensive source of information on European businesses, these statistics are only provided annually. Compared to other sectors of the economy, the tourism sector has a relatively strong seasonal component, hence the need to look at infra-annual data to complete the analysis. Short-term business statistics provide monthly and quarterly indices for a subset of tourism industries. For the analysis in this article, an aggregate was created including NACE divisions H51 (Air travel), I55 (Accommodation) and N79 (Travel agency, tour operator and other reservation service and related activities).

Figure 3 shows for the EU-27 above mentioned tourism industries, the quarterly evolution of the turnover, seasonally adjusted or working days adjusted, for the years 2008 to 2019 (index: average 2015 = 100). The graph shows an upward trend that was only interrupted from the first quarter of 2009 until mid-2010 (start of the worldwide financial turmoil). 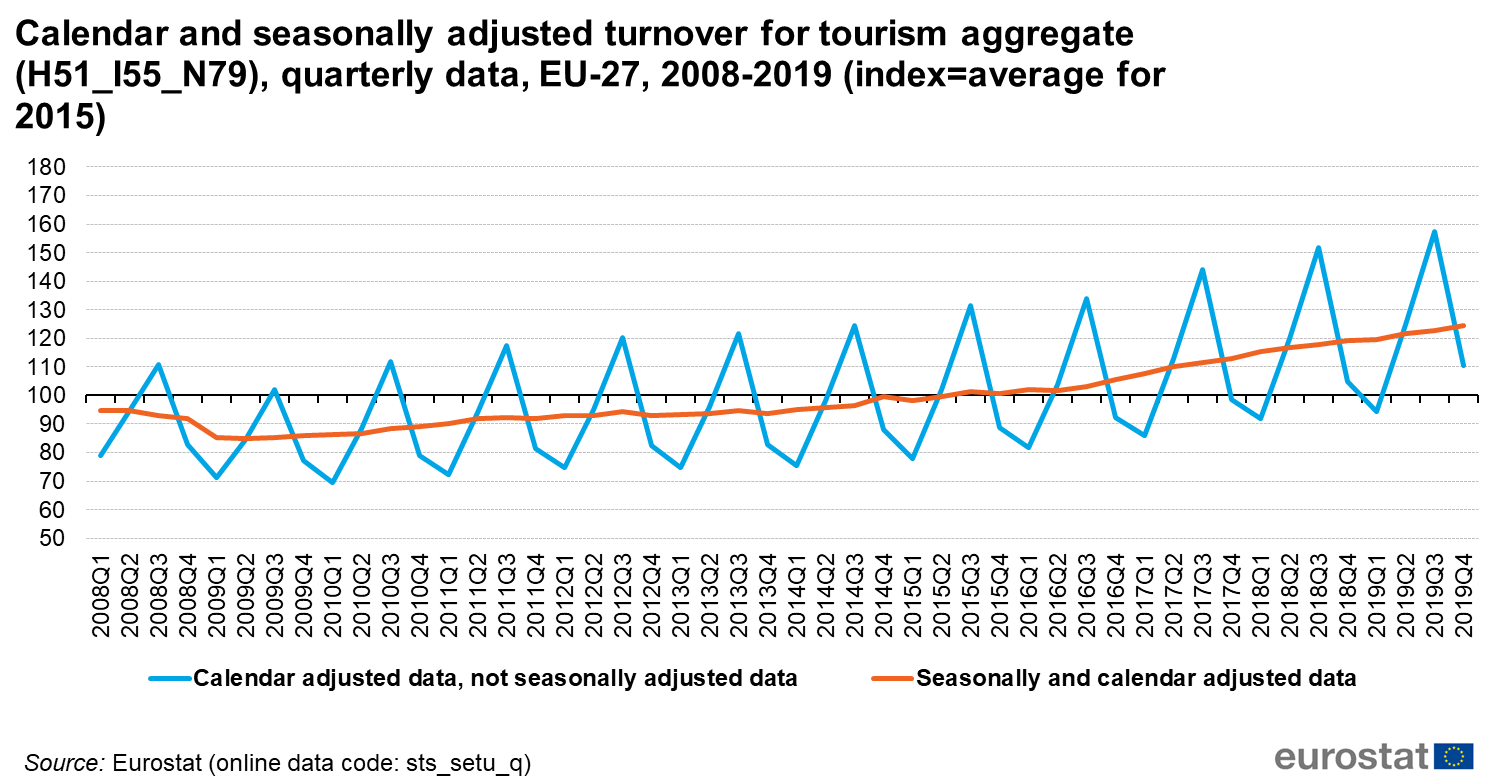 Figure 4 shows for the EU-27, for the period January 2010 to December 2019, the monthly evolution of the working days adjusted turnover in accommodation, and the nights spent in tourist accommodation establishments (index: average 2015 = 100) . As expected, the two series follow a similar pattern in terms of peak and trough periods, however the variability appears to be more pronounced for the physical flows (nights spent) as compared with the monetary flows (turnover). 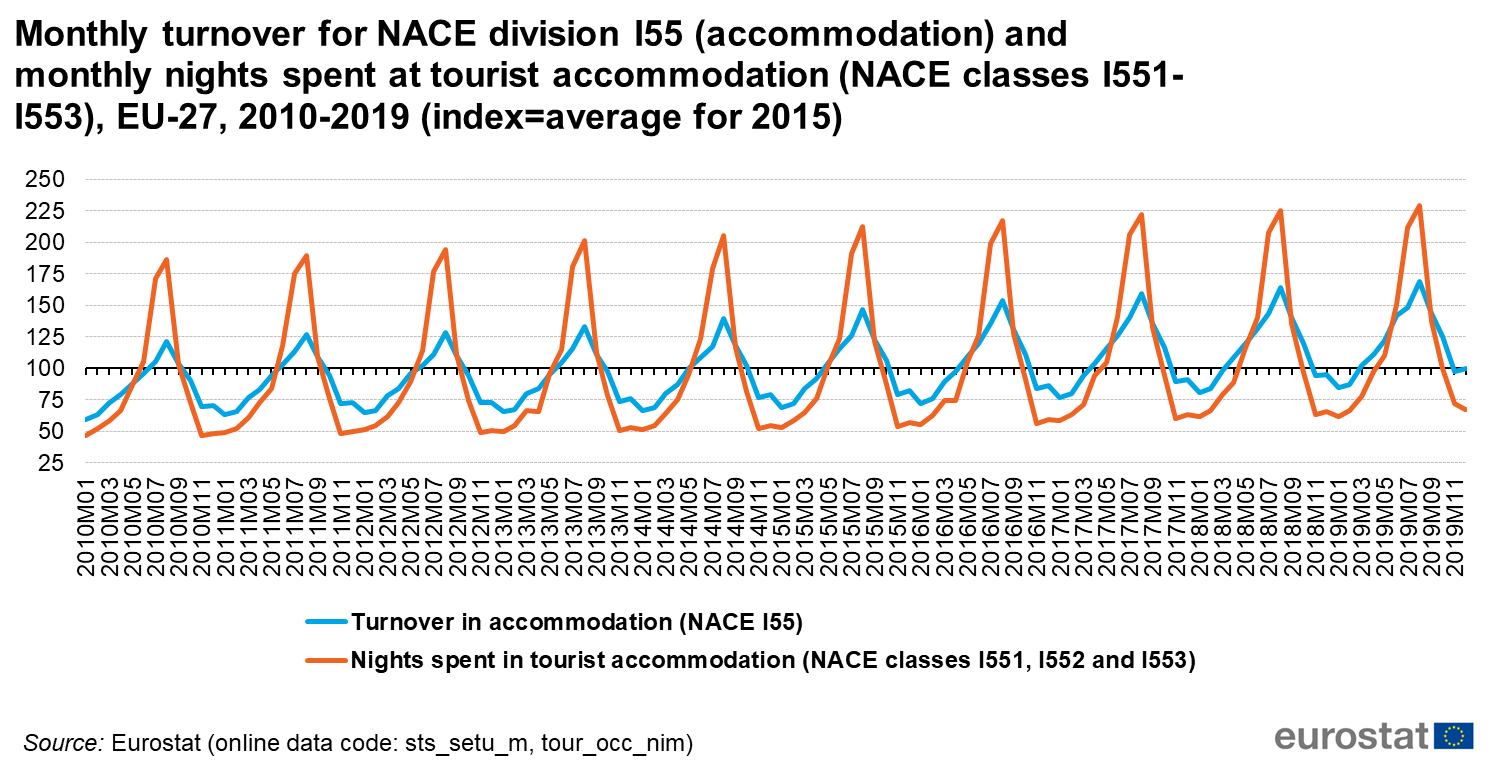 Figure 5 shows, for the years 2010 to 2019, the quarterly working days adjusted turnover for the above mentioned group of tourism industries for two countries: Greece, which presents the highest seasonality among the available EU countries in terms of turnover and Luxembourg which has the lowest seasonality.

Structural business statistics (SBS) are a main component of business statistics in the European Statistical System (ESS) and describe the structure, main characteristics and performance of economic activities across the European Union. Data is available at a detailed level of economic activities, which allow for the identification and selection of industries that are part of the tourism sector. According to the International Recommendations for Tourism Statistics 2008 the tourism sector (also: 'tourism industries' or 'tourism characteristic activities') includes ten internationally comparable activities and two country-specific activities – this article focuses on the former. An overview of these activities (and the corresponding codes in the international classifications ISIC and NACE) is given in Table 7. All these activities are covered by SBS, except for culture, sports and recreation. 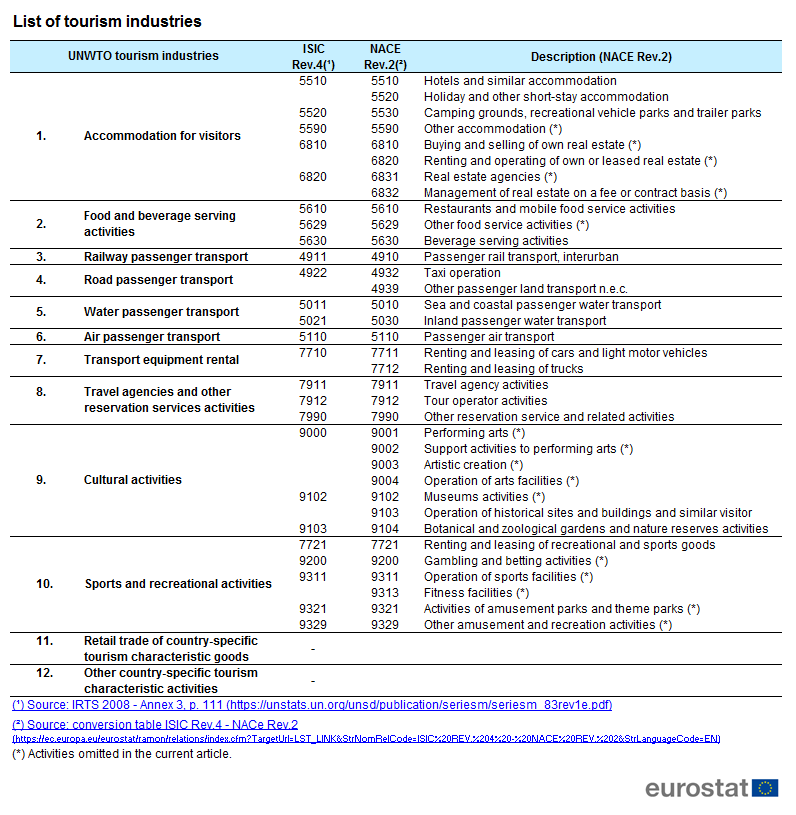 This article uses a fine-tuned list of the tourism industries, better adapted to the European setting and avoiding overestimations of the economic variables. Activities omitted include "other accommodation" (NACE 5590), "other food service activities" (NACE 5629) and "real estate activities" (NACE 68), these activities are not sufficiently related to tourism to justify their inclusion in the current analysis.

Existing business statistics (SBS, STS) cannot distinguish between services provided to tourists and to non-tourists – typical examples include restaurants catering to tourists but also to locals and railway passenger transport used by tourists as well as by commuters. For this reason, this analysis considers these industries in their totality. Considering the total turnover or employment overestimates the true economic importance of tourism for these industries, but on the other hand, tourism also contributes to other industries not listed in Table 7. The approach used in this article should not be confused with the methodological framework to compile tourism satellite accounts (TSA); the most recent Eurostat statistical report on TSA in Europe is available from the Eurostat website.

Notwithstanding these shortcomings, SBS data allow for an economic analysis of the sector which is not possible using only tourism statistics. A second relevant source within existing business statistics is short-term business statistics (STS). STS can fill the gap of information on turnover or prices where monthly accommodation statistics are limited to evolutions in flows of tourists. As a trade-off with its strong timeliness, STS is available with a lower granularity of activities for services; as a consequence the further analysis of monthly economic indicators focuses on air transport (NACE H51), accommodation (NACE I55) and travel agency, tour operator reservation service and related activities (NACE N79).