The EU in the world - labour market

For a small majority of G20 members, the lowest unemployment rates in 2018 were recorded for people with a tertiary level of education.

Close to two thirds of the unemployed in South Africa in 2018 had been unemployed for a year or more. 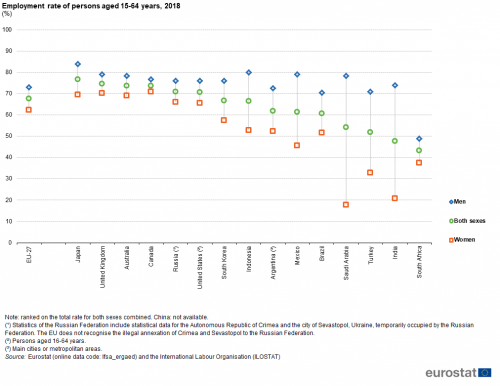 This article is part of a set of statistical articles based on Eurostat’s publication The EU in the world 2020. It focuses on labour market statistics in the European Union (EU) and the 16 non-EU members of the Group of Twenty (G20). The article covers key indicators on employment and unemployment and gives an insight into the EU’s labour market in comparison with (most of) the major economies in the rest of the world, such as its counterparts in the so-called Triad — Japan and the United States — and the BRICS composed of Brazil, Russia, India, China and South Africa.

Particular care should be taken when comparing labour market data between different countries, given that there are sometimes differences in the age criteria used to calculate employment and unemployment rates.

In 2018, the employment rate, calculated as the share of employed persons in the working-age population (defined here as persons aged 15-64 years), was 67.7 % in the EU-27; this rate was roughly in the middle of a ranking of the G20 members. South Africa and India were the only G20 members where less than half of the working-age population were in employment in 2018, with rates of 43.3 % and 47.7 % respectively. In the United States (persons aged 16-64 years), Russia, Canada, Australia and the United Kingdom the employment rate was between 70 % and 75 %, while the highest employment rate among G20 members was recorded in Japan, at 76.8 %.

The most recent data (see Figure 1) show that the EU-27’s employment rate for men (73.0 %) was lower than in most of the G20 members in 2018, although it was somewhat higher than in Turkey and Brazil and considerably higher than in South Africa. Elsewhere, employment rates for men ranged from 73.9 % in India to 80.1 % in Indonesia, with Japan (83.9 %) above this range. For women, the EU-27 employment rate of 62.3 % was higher than in a majority of the other G20 members, although a higher proportion of women were employed in the United States (16-64 years), Russia, Australia, Japan and the United Kingdom, with a peak of 71.0 % recorded in Canada. By contrast, employment rates for women were below 50 % in Mexico, South Africa, Turkey and India, and were lowest in Saudi Arabia at 17.9 %.

The gender gap for the employment rate was 10.7 percentage points in favour of men across the EU-27, with the United States (16-74 years), Russia, Australia, the United Kingdom and Canada reporting narrower gaps. By far the largest gender gaps were in India and Saudi Arabia, where the employment rates for men were 53.0 points higher than those for women in the former and 60.5 points higher in the latter. 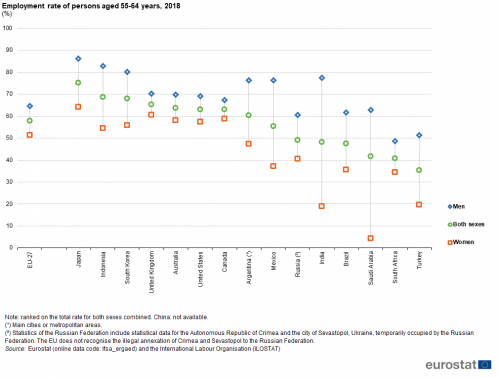 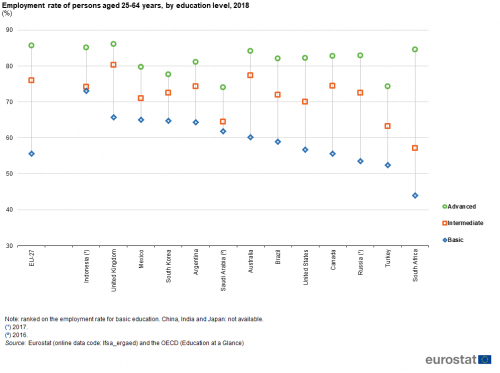 Figure 3: Employment rate of persons aged 25-64 years, by education level, 2018
(%)
Source: Eurostat (lfsa_ergaed) and the OECD (Education at a Glance) 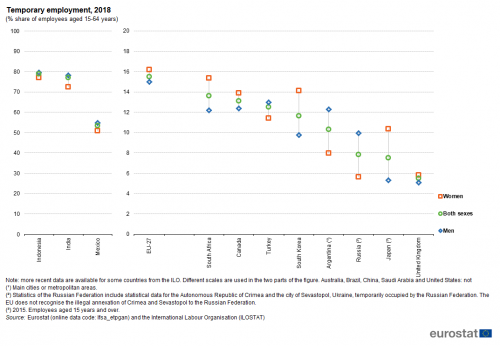 The unemployment rate is calculated as the number of unemployed persons as a proportion of economically active persons (otherwise referred to as the labour force, comprising all employed and unemployed persons). In 2018, the unemployment rate for persons aged 15-74 years in the EU-27 was 7.3 %. Among the other G20 members, the unemployment rate for persons aged 15 years and over ranged in 2018 from 2.4 % in Japan to 6.0 % in Saudi Arabia, with Argentina (9.2 %; main cities and metropolitan areas only), Turkey (10.9 %), Brazil (12.3 %) and South Africa (26.9 %) above this range. 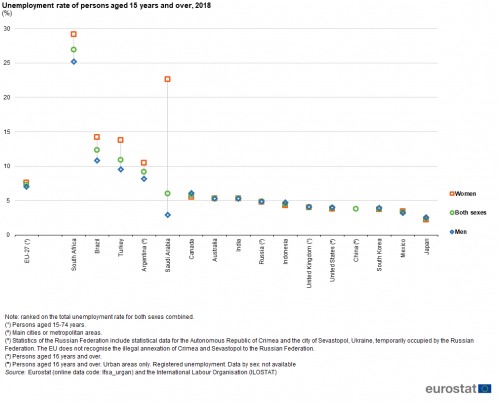 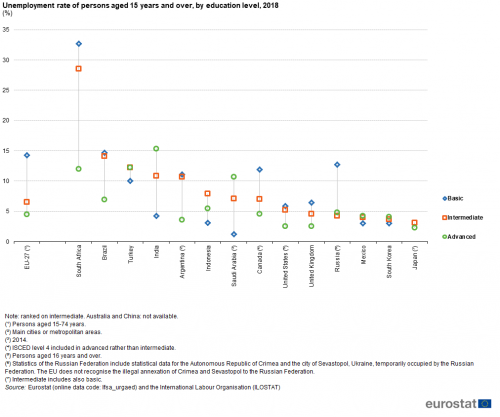 In 2018, close to 70 % of all unemployed people in South Africa had been unemployed for a year or more 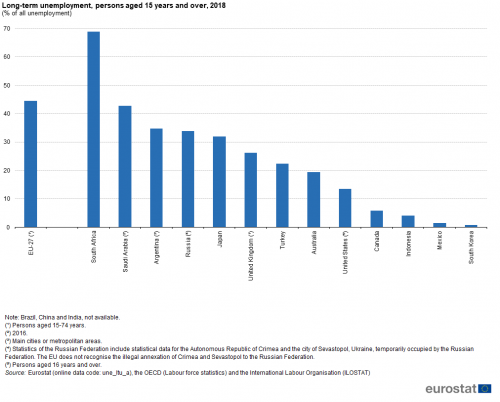 Figure 8 focuses on the youth unemployment rate, in other words the unemployment rate for persons aged 15-24 years. It should be remembered that a large share of persons in this age range are outside the labour market and are therefore not economically active. For example, young people are more likely to be studying full-time and therefore not available for work, while some may undertake other activities outside of the labour market, such as travel or voluntary work.

Within the EU-27, there was relatively little difference in youth unemployment rates when looking at figures by sex, with the rate for young men 0.8 percentage points higher than the rate for young women in 2018. Several G20 members reported much higher youth unemployment rates for women than for men: indeed, rates for young women were between 6.9 and 9.6 points higher than those for young men in Argentina (main cities and metropolitan areas only), Turkey, Brazil and South Africa, with this gap reaching 42.7 points in Saudi Arabia. 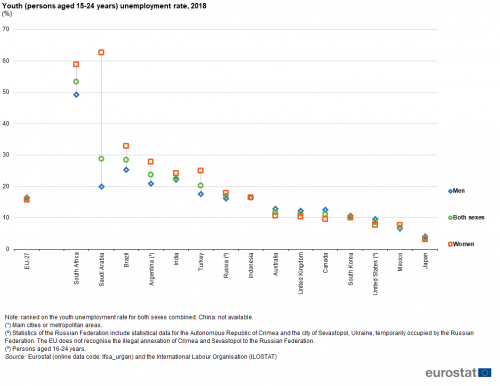 The indicators presented for the EU and the United Kingdom have been drawn from Eurobase, Eurostat’s online database. Eurobase is updated regularly, so there may be differences between data appearing in this article and data that is subsequently downloaded.

For the non-EU G20 members other than the United Kingdom, the data presented have mainly been compiled by the International Labour Organisation with some data compiled by the OECD. For some of the indicators shown a range of international statistical sources are available, each with their own policies and practices concerning data management (for example, concerning data validation, correction of errors, estimation of missing data, and frequency of updating). In general, attempts have been made to use only one source for each indicator in order to provide a comparable dataset for G20 members.

Labour market statistics measure the involvement of individuals and businesses in the labour market, where the former generally offer their labour in return for remuneration, while the latter offer employment. Market outcomes — for example, employment, unemployment, wage levels and labour costs — of these relationships affect not only the economy, but directly the lives of practically every person.

The economically active population, also known as the labour force, is made up of employed persons and the unemployed. Employed persons include employees as well as employers, the self-employed and family workers (persons who help another member of the family to run a farm, shop or other form of business). Persons in employment are those who did any work for pay or profit or were not working but had a job from which they were temporarily absent. The amount of time spent working is not a criterion and so full-time and part-time workers are included as well as persons on temporary contracts (contracts of limited duration). Members of the population who are neither employed nor unemployed are considered to be economically inactive. 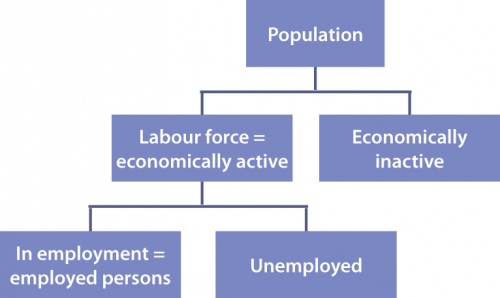 Temporary employees as percentage of the total number of employees, by sex, age and citizenship (%) (lfsa_etpgan)