The EU in the world - health

Lowest health expenditure per inhabitant in 2016 among G20 members was in India.

The gender gap in life expectancy at birth in 2017 was higher for Russia than for other G20 members.

Among G20 members, the lowest proportions of overweight people (including obese) in 2016 were in India, both for men and for women. 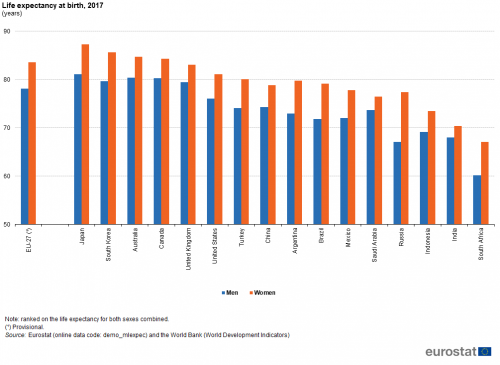 This article is part of a set of statistical articles based on Eurostat’s publication The EU in the world 2020. It focuses on public health issues such as healthcare expenditure, provision and resources, as well as various health determinants in the European Union (EU) and the 16 non-EU members of the Group of Twenty (G20). The article gives an insight into health in the EU in comparison with (most of) the major economies in the rest of the world, such as its counterparts in the so-called Triad — Japan and the United States — and the BRICS composed of Brazil, Russia, India, China and South Africa.

Among G20 members, India had the lowest health expenditure per inhabitant in 2016

Among G20 members, the United States had by far the highest expenditure on health relative to gross domestic product (GDP), 17.1 % in 2016, almost double the 9.9 % recorded in the EU-27 (see Figure 1). Brazil, Japan and Canada each reported double-digit ratios in 2016. Spending on health in Turkey, India and Indonesia was less than 5.0 % of GDP. 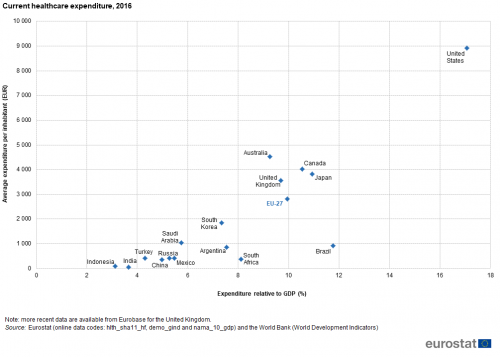 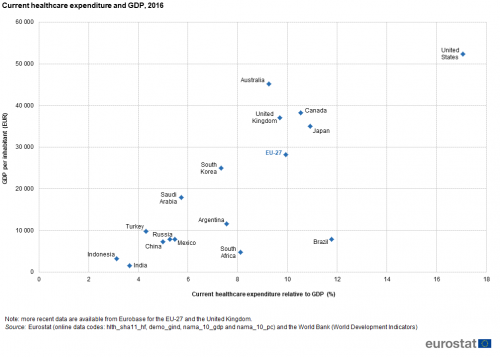 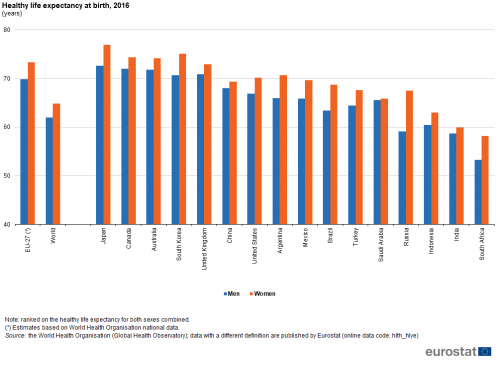 Combining the data presented in Figures 3 and 4 indicates that, on average, people living in all G20 members could expect to live between 86 % and 90 % of their life free from disability (in other words, in a healthy state), with the lowest share recorded in Turkey and the highest in Mexico. In the EU-27, the share was 88 %.

Almost all maternal deaths — those related to pregnancy and childbirth — occur in emerging and developing countries, with maternal mortality rates generally higher in their rural areas and among poorer communities. Most maternal deaths are preventable and according to the World Health Organisation the main causes are: severe bleeding (mostly bleeding after childbirth); infections (usually after childbirth); high blood pressure during pregnancy (pre-eclampsia and eclampsia); complications from delivery; and unsafe abortions. 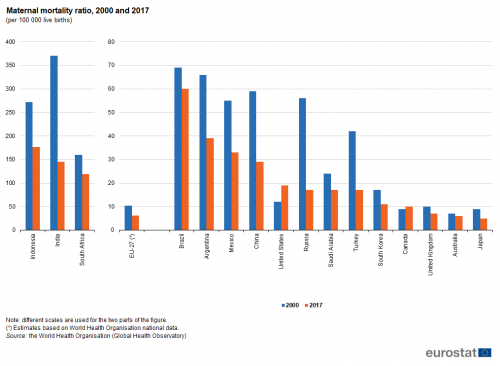 Between 2000 and 2017, the maternal mortality ratio fell in most G20 members, the exceptions being the United States, where the ratio increased considerably in relative terms (up by almost 60 %), and Canada, where an already low ratio rose slightly. Elsewhere, particularly large falls in the maternal mortality ratio were observed in India and Indonesia, as well as in South Africa, Russia, China, Argentina, Turkey and Mexico. 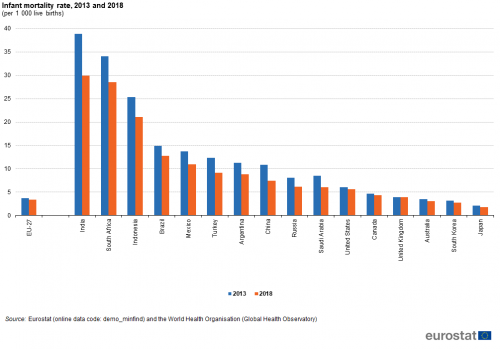 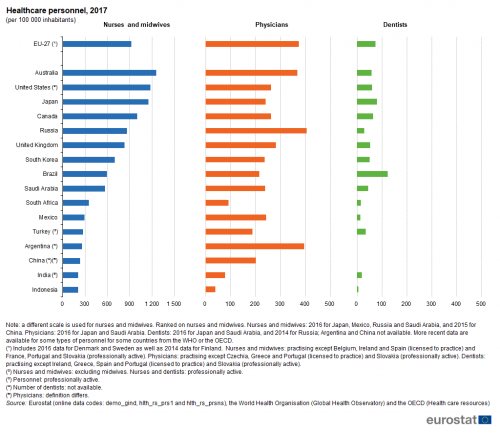 The variation between the G20 members in the number of is the total number of physicians was relatively low in comparison with the other personnel indicators shown in Figure 7. The highest number of physicians relative to the overall population size in 2017 among the G20 members was recorded in Russia, followed closely by Argentina and then the EU-27 and Australia. At the other end of the range, South Africa, India and Indonesia recorded less than 100 physicians per 100 000 inhabitants; note that for India (as well as for China) the definition used differs.

Figures 8 to 10 provide information on three non-medical health determinants, namely alcohol consumption, smoking and being overweight. The highest annual alcohol consumption in 2016 among G20 members was recorded for Russia (11.7 litres of alcohol per inhabitant aged 15 years and over), the United Kingdom (11.5 litres) and the EU-27 (11.3 litres). They were closely followed by Australia, South Korea, Argentina and the United States with annual alcohol consumption in the range of 9.8-10.6 litres per inhabitant. Relatively low average levels of alcohol consumption were recorded for India and Turkey, while the lowest levels were recorded in Indonesia (0.8 litres) and Saudi Arabia (0.2 litres); these low levels are influenced, to a large degree, by predominant religious beliefs in these countries. In all G20 members the average alcohol consumption in 2016 was greater among men than among women. In relative terms, the widest gender gap was recorded in Turkey where the average consumption by men was 9.3 times as high as that by women. The narrowest gender differences were recorded for Russia and Saudi Arabia where men on average men consumed about three times as much alcohol as women. 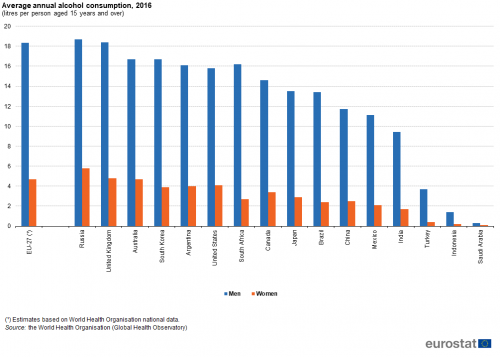 Indonesia reported the highest proportion of daily smokers: two fifths (40 %) of the population aged 15 years and over smoked in 2015. One quarter or more of the adult population in Russia (2016 data), Turkey (2016 data) and China (2015 data) smoked daily, while one fifth of the adult population smoked on a daily basis in the EU-27 (2014 data), and slightly less than one fifth in South Africa (2015 data), Japan, South Korea and the United Kingdom. Elsewhere, the incidence of daily smoking was at most 12 %, with a low of 8 % recorded in Mexico (note that the definition differs). In all G20 members the proportion of daily smokers in 2017 was greater among men than among women. The widest gender gap was recorded in Indonesia where 76 % of all men aged 15 years and over were daily smokers compared with just 4 % of women (2015 data). The narrowest gender differences were recorded for Canada, the United Kingdom, Australia (2016 data) and the United States. 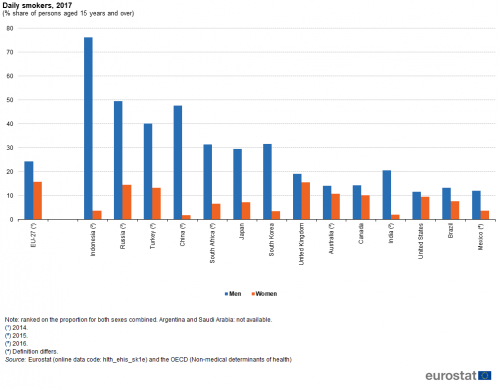 Figure 9: Daily smokers, 2017
(% share of persons aged 15 years and over)
Source: Eurostat (hlth_ehis_sk1e) and the OECD (Non-medical determinants of health)

Among the G20 members, India recorded the lowest proportion of people being overweight in 2016, both for men and for women 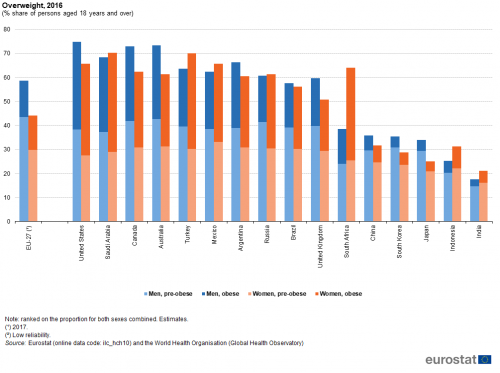 The highest proportions of men that were overweight in 2016 were observed for the United States (75 % of the male population), Australia and Canada (both 73 %) — see Figure 10; note that the data presented may be based on measured results or self-reported data. By contrast, the highest proportions of overweight women were recorded in Saudi Arabia and Turkey (both 70 %), followed by the United States and Mexico (both 66 %). By contrast, a relatively low proportion of men were overweight in Indonesia (25 %) and India (18 %), while for women the lowest proportions were recorded in Japan (25 %) and India (21 %).

Nearly all of the indicators presented for the EU and the United Kingdom have been drawn from Eurobase, Eurostat’s online database. Eurobase is updated regularly, so there may be differences between data appearing in this article and data that is subsequently downloaded. In some cases some data for the EU and for the United Kingdom have been extracted from international sources.

For the non-EU G20 members other than the United Kingdom, the data presented have mainly been compiled by the World Health Organisation; some data have been compiled by the OECD and some by the World Bank. For some of the indicators shown a range of international statistical sources are available, each with their own policies and practices concerning data management (for example, concerning data validation, correction of errors, estimation of missing data, and frequency of updating). In general, attempts have been made to use only one source for each indicator in order to provide a comparable dataset for G20 members.

Health issues cut across a range of topics — including the provision of healthcare and protection from illness and accidents, such as consumer protection (food safety issues), workplace safety, environmental or social policies. The health statistics presented in this article address public health issues such as healthcare expenditure and resources, life expectancy and mortality, as well as a number of determinants of the health status of a population.

In many developed countries life expectancy at birth rose rapidly during the last century due to a number of factors, including reductions in infant mortality, rising living standards, improved lifestyles and better education, as well as advances in healthcare and medicine. Life expectancy at birth is one of the most commonly used indicators for analysing mortality and reflects the mean (additional) number of years that a person of a certain age can expect to live, if subjected throughout the rest of their life to the current mortality conditions.

Indicators of health expectancies, such as healthy life years (also called disability-free life expectancy) have been developed to study whether extra years of life gained through increased longevity are spent in good or bad health. These focus on the quality of life spent in a healthy state, rather than total life spans. Disability-free life expectancy is the number of years that a person is expected to continue to live in a healthy condition, in other words without limitation in functioning and without disability.