The EU in the world - environment

Revenue from environmental taxes in the EU-27 was equivalent to 2.4% of GDP in 2018, among the highest ratios for G20 members. 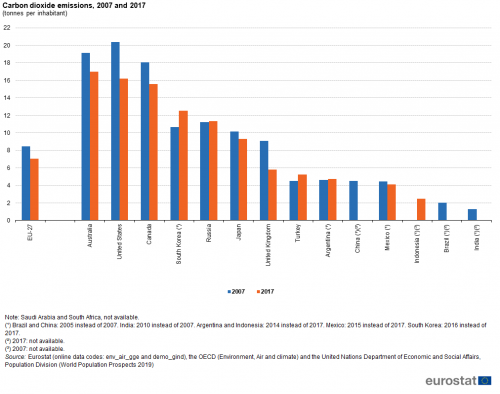 This article is part of a set of statistical articles based on Eurostat’s publication The EU in the world 2020. It focuses on environmental issues in the European Union (EU) and the 16 non-EU members of the Group of Twenty (G20). The article provides information on environmental taxes, air emissions and municipal waste generation and treatment. It gives an insight into the state of the environment in the EU and in (most of) the major economies in the rest of the world, such as its counterparts in the so-called Triad — Japan and the United States — and the BRICS composed of Brazil, Russia, India, China and South Africa.

An environmental tax is one whose tax base is a physical unit (or a proxy of one) of something that has a proven, specific negative impact on the environment. Examples are taxes on energy, transport and pollution, with the first two dominating revenue raised through these taxes in nearly all countries. As well as raising revenue, environmental taxes may be used to influence the behaviour of producers or consumers. 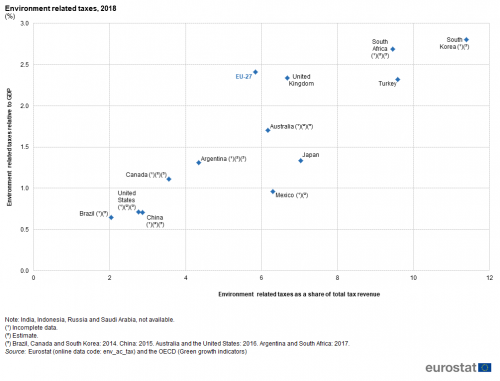 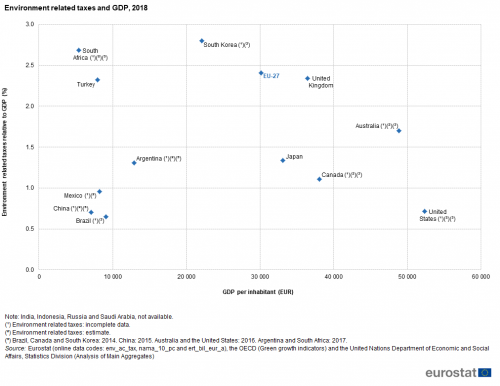 Emissions of different greenhouse gases are converted to carbon dioxide equivalents based on their global warming potential to make it possible to compare and aggregate them. According to the World Bank, worldwide greenhouse gas emissions in 2012 were 53.5 billion tonnes of CO2-equivalents. The G20 members (excluding Saudi Arabia and South Africa) accounted for 71.9 % of the total in 2012 (see Figure 3). China (23.3 %) and the United States (11.9 %) were the largest emitters, followed by the EU-27 (7.7 %), India, Brazil (both 5.6 %) and Russia (5.2 %). 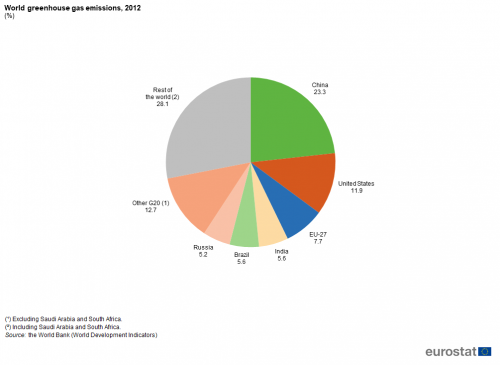 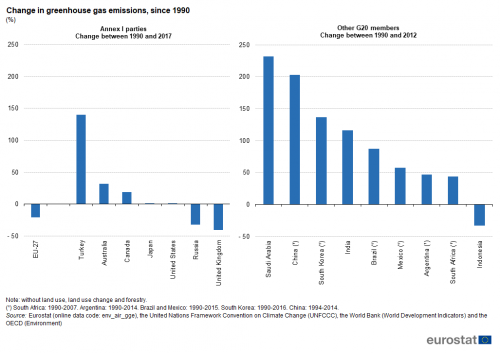 Figure 5 provides information on the source of greenhouse gas emissions. Energy (including energy supply, transport and other energy) accounted for at least 70 % of all greenhouse gas emissions in the G20 members that are Annex I parties. Among the energy sectors, energy supply had the largest share of emissions in Japan, Australia, Russia and Turkey, whereas other energy had the largest share in Canada, the EU-27, the United States and the United Kingdom. The United Kingdom and the United States were the only two G20 members that are Annex I parties where the share of emissions from transport was greater than that from energy supply. Agricultural process accounted for more than 10.0 % of emissions in Australia, Turkey and the EU-27, as did industrial processes in Turkey and Russia. Among the G20 members that are not Annex I parties, waste made a relatively large contribution to the level of greenhouse gas emissions in Indonesia (2000 data) as did agriculture in Brazil (2015 data) and Argentina (2012 data). 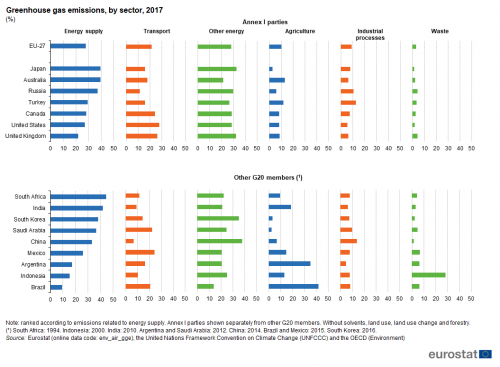 Figure 6 provides information on emissions of carbon dioxide calculated relative to the population size. This ratio varied considerably between G20 members reflecting, among other factors, the structure of each economy (for example, the relative importance of heavy, traditional industries), the national energy mix (the share of low or zero-carbon technologies compared with the share of fossil fuels), heating and cooling needs and practices, and the propensity for motor vehicle use.

The Gothenburg Protocol is one of several concluded under the United Nations Economic Commission for Europe Convention on Long Range Transboundary Air Pollution; it aims to control transboundary air pollution and associated health and environmental impacts, notably acidification, eutrophication and ozone pollution. Ozone depleting substances (ODS) contribute to ozone depletion in the Earth’s atmosphere and include hydrochlorofluorocarbons (HCFCs). These substances are listed in the Montreal Protocol which is designed to phase out their production and consumption. 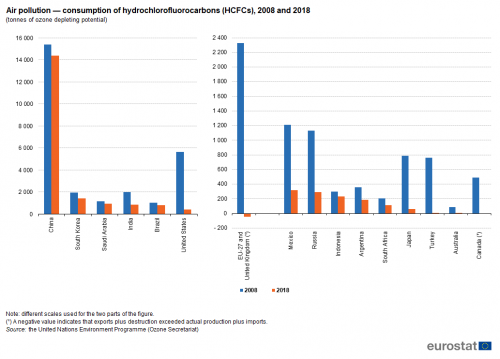 The management and treatment of waste can have serious environmental impacts, taking up space and potentially releasing pollution into the air, water or soil. Municipal waste is collected by or on behalf of municipalities, by public or private enterprises and originates from households, commerce and trade, small businesses, office buildings and institutions (for example, schools, hospitals or government buildings) and some municipal services. For areas not covered by a municipal waste collection scheme the amount of waste generated is estimated.

Figure 8 shows that the amount of municipal waste generated in 2007 was particularly low in Indonesia and China, although no recent data are available. The EU-27 average was 482 kg of waste generated per inhabitant in 2017 and the available data indicate a higher level of waste generation in 2015 for both Australia (558 kg per inhabitant) and the United States (742 kg per inhabitant). Among the G20 members with data for both years shown in the figure, decreases in the level of waste generated relative to population size were recorded in all countries except for South Korea where there was a slight increase between 2007 and 2016. In relative terms, the largest decreases were observed for Japan (down 15 %; 2007-2016) and the United Kingdom (down 17 %; 2007-2017). 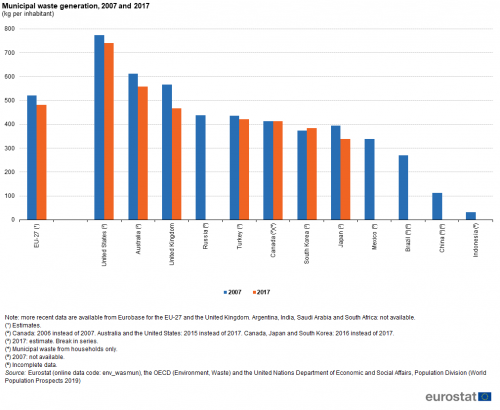 South Korea recycled almost 60 % of its municipal waste in 2016

Landfilling is the final placement of waste into or onto the land in a controlled or uncontrolled way. Incinerating is the controlled combustion of waste with or without energy recovery. Recycling is any reprocessing of waste material in a production process that diverts it from the waste stream, except reuse as fuel; both reprocessing as the same type of product and for different purposes should be included, while recycling at the place of generation should be excluded. Composting is a biological process that submits biodegradable waste to anaerobic or aerobic decomposition and that results in a product that is recovered and can be used to increase soil fertility. 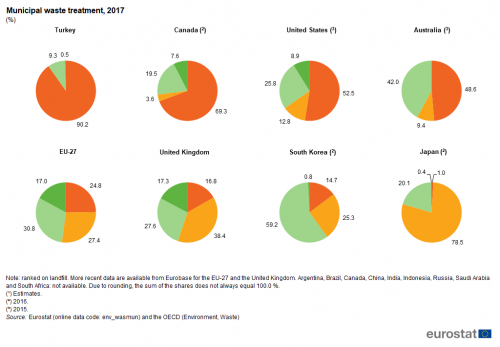 The data presented for the EU and the United Kingdom concerning taxes, greenhouse gas emissions and waste have been drawn from Eurobase, Eurostat’s online database. Eurobase is updated regularly, so there may be differences between data appearing in this article and data that is subsequently downloaded. For the indicator concerning the consumption of hydrochlorofluorocarbons, data have been extracted from international sources for reasons of comparability or availability.

Dramatic events around the world frequently propel environmental issues into the mainstream media, from wide scale floods or forest fires to other extreme weather patterns, such as hurricanes. The world is confronted by many environmental challenges, for example tackling climate change, preserving nature and biodiversity, or promoting the sustainable use of natural resources. The inter-relationship between an economy and a society on one hand and their surrounding environment on the other hand is a factor for many of these challenges and underlies the interest in sustainable growth and development, with positive economic, social and environmental outcomes.