The EU in the world - education and training

Public educational expenditure relative to GDP among the G20 members in 2016 was highest in South Africa and Brazil, around 6 %.

In 2017, India had the highest pupil-teacher ratios for primary and secondary education among G20 members.

Among G20 members, Japan had the lowest proportion of young people not in employment, education or training in 2018. 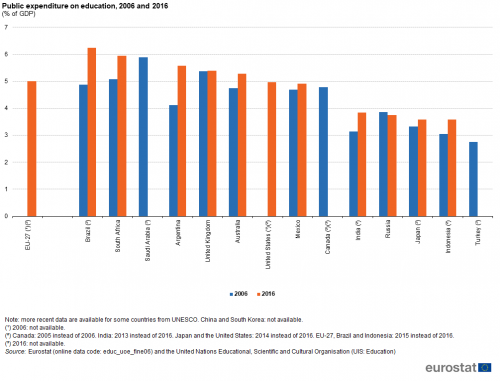 This article is part of a set of statistical articles based on Eurostat’s publication The EU in the world 2020. It focuses on education and training statistics in the European Union (EU) and the 16 non-EU members of the Group of Twenty (G20). The article covers a range of subjects, including: educational expenditure, personnel, enrolment and attainment and gives an insight into education in the EU in comparison with (most of) the major economies in the rest of the world, such as its counterparts in the so-called Triad — Japan and the United States — and the BRICS composed of Brazil, Russia, India, China and South Africa.

The level of educational enrolment depends on a wide range of factors, such as the age structure of the population, legal requirements concerning the start and duration of compulsory education, and the availability of educational resources.

Public expenditure on education relative to GDP was just above 6 % in Brazil, the highest ratios among G20 members

Public expenditure on education includes spending on schools, universities and other public and private institutions involved in delivering educational services or providing financial support to students. The cost of teaching increases significantly as a child moves through the education system, with expenditure per pupil/student considerably higher in universities than in primary schools. Comparisons between countries relating to levels of public expenditure on education are influenced, among other factors, by differences in price levels and the number of pupils and students; in turn, the latter is influenced, to some extent, by the age structure of the population (see an article on population for more information).

Numbers of teachers and pupils

Across the G20 members, India had the highest pupil-teacher ratios in 2017 for primary and for secondary education

Figure 2 presents pupil-teacher ratios for primary and secondary education among the G20 members. These ratios are calculated by dividing the number of pupils and students by the number of educational personnel: note they are calculated based on a simple headcount and do not take account of the intensity (for example, full or part-time) of study or teaching. 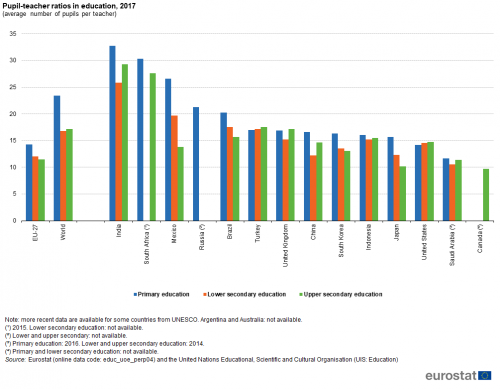 In 2017, net enrolment ratios in primary education were notably higher for boys than girls in Indonesia

Worldwide, primary education net enrolment ratios were 88.2 % for girls and 90.3 % for boys in 2017, with all G20 members reporting higher ratios except for Turkey and South Africa. The highest primary education net enrolment ratio was recorded in Canada at 99.9 %, with the United Kingdom and Argentina reporting ratios of 99.5 % and 99.2 %, followed by South Korea (97.3 %). In the EU-27, the ratio was 94.7 %. Among the G20 members, Indonesia and Turkey reported the largest differences between net enrolment ratios for boys and girls, with the ratio for boys exceeding that for girls by 4.5 and 1.4 percentage points respectively. Elsewhere the gap — whether from higher rates for girls as in Australia and Russia (2016 data) or higher rates for boys as reported elsewhere — was less than 1.0 points. 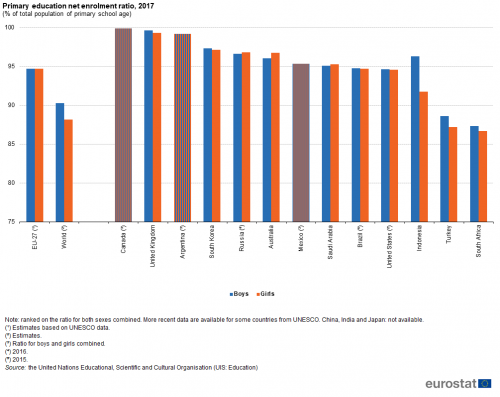 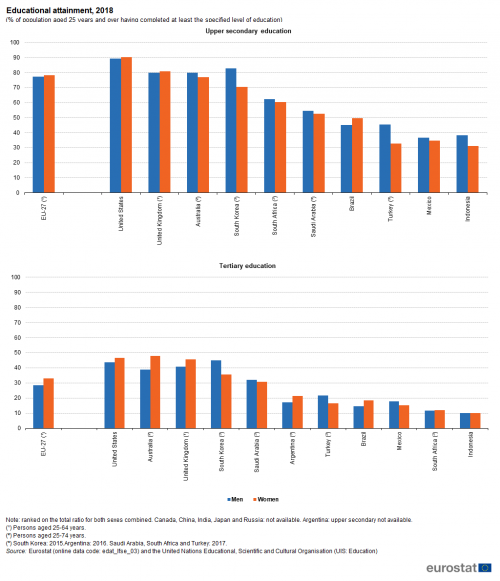 Figure 4: Educational attainment, 2018
(% of population aged 25 years and over having completed at least the specified level of education)
Source: Eurostat (edat_lfse_03) and the United Nations Educational, Scientific and Cultural Organisation (UIS: Education)

Not in employment, education or training

Among G20 members, Japan had by far the lowest proportion of young people not in employment, education or training in 2018

Traditional analyses of the labour market focus on employment and unemployment, but for younger people many are still in education. As a result, labour market policies for young people often focus on those who are not in employment, education or training, abbreviated as NEETs. Factors that influence the proportion of NEETs include the length of compulsory education, types of available educational programmes, access to tertiary education and training, labour market factors related to unemployment and economic inactivity (being neither employed nor unemployed), and cultural issues such as the likelihood of taking on caring responsibilities with an extended family and/or the typical age of starting a family.

Figure 5 shows the NEET rate of 15-24 years olds in 2018. Among the G20 members, this ranged from 2.9 % in Japan to 31.6 % in South Africa. The EU-27 had a rate of 10.5 %, higher only than in the United Kingdom, Australia (2017 data) and Japan. Canada was the only G20 member to report a larger proportion of young men (rather than young women) who were not in employment, education or training. By far the largest gender gap for this indicator was observed in India, where 48.3 % of young women were not in employment, education or training in 2018, compared with 14.3 % for young men; the next largest gaps were observed in Mexico, Saudi Arabia (2015 data) and Turkey. 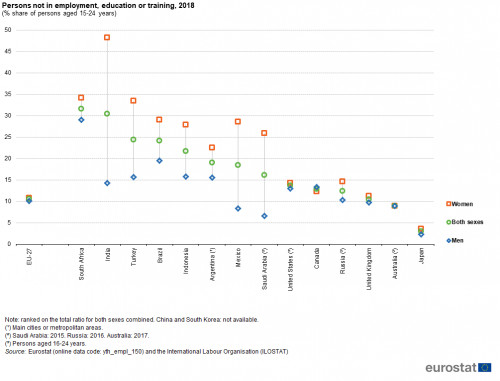 For the non-EU G20 members other than the United Kingdom, the data presented have mainly been compiled by the United Nations Educational, Scientific and Cultural Organisation, with the data for the indicator concerning the proportion of 15-24 year-olds not in employment, education or training compiled by the International Labour Organisation.

Education and training has the potential to foster economic growth, enhance productivity, contribute to people’s personal and social development, and reduce social inequalities. In this light, education and training may play a vital role in both an economic and social context. Education statistics cover a range of subjects, including: expenditure, personnel, participation and attainment. International standards for statistics on education are set by three international organisations: the Institute for Statistics of the United Nations Educational, Scientific and Cultural Organisation; the OECD; and Eurostat.

Young people neither in employment nor in education and training by sex, age and labour status (NEET rates) (yth_empl_150)