The EU in the world - economy and finance

China and India had the highest GDP growth between 2008 and 2018 among the G20 members.

Among the G20 members, Argentina recorded the largest increase in consumer prices between 2008 and 2018. 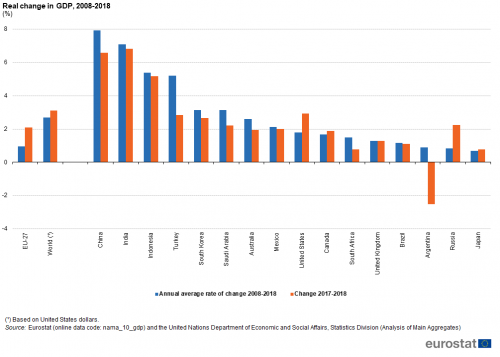 This article is part of a set of statistical articles based on Eurostat’s publication The EU in the world 2020. It presents indicators from various areas, such as national accounts, government finance, exchange rates and interest rates, consumer prices, and the balance of payments in the European Union (EU) and the 16 non-EU members of the Group of Twenty (G20). The article gives an insight into the EU’s economy in comparison with (most of) the major economies in the rest of the world, such as its counterparts in the so-called Triad — Japan and the United States — and the BRICS composed of Brazil, Russia, India, China and South Africa. 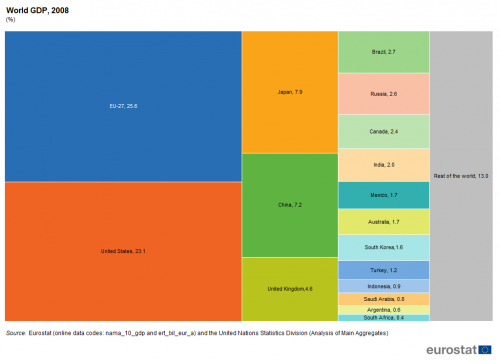 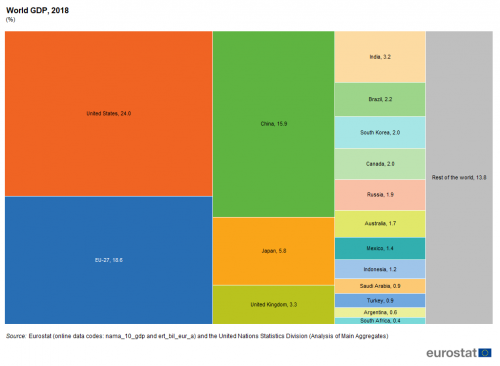 Figure 1 shows the real rate of change (based on price adjusted data) of GDP in the latest year for which data are available (2018 compared with 2017) as well as the 10-year annual average rate of change between 2008 and 2018; it should be remembered that much of the financial and economic crisis occurred during the early part of this period. The lowest 10-year rates of change were generally recorded in developed economies such as Japan, Russia, Argentina and the EU-27, while the highest growth rates were recorded in several Asian economies, most notably in India and China. Looking at the rate of change between 2017 and 2018, Argentina stands out as it recorded a contraction in its economic output in 2018. At the other end of the scale three G20 members stood out with notably faster growth, with annual increases of 5.2 % in Indonesia, 6.6 % in China and 6.8 % in India. For comparison, the annual growth rate of GDP in 2018 for the whole world was 3.1 %, with the EU-27 recording slightly slower growth (2.1 %).

Among the G20 members, the highest gross national income (GNI) per inhabitant in 2018 was recorded in the United States, ahead of Saudi Arabia. Note that the conversion to United States dollars used for this indicator in Figure 2 is based on purchasing power parities (PPPs) rather than market exchange rates and so reflects differences in price levels between countries. The average levels of income per inhabitant in the United States and in Saudi Arabia were 3.6 and 3.1 times as high as the average GNI for the whole world (USD 17.9 thousand per inhabitant). Australia, Canada, the United Kingdom, Japan, the EU-27 and South Korea each recorded average GNI per inhabitant that was more than double the world average. By contrast, four G20 members recorded levels of GNI per inhabitant that were below the world average, namely Brazil, South Africa, Indonesia and India. 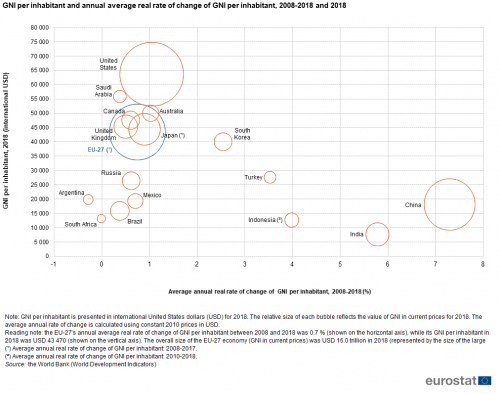 The financial and economic crisis of 2008 and 2009 resulted in considerable media exposure for government finance indicators. The importance of the general government sector — in other words all levels of government, from central to the most local level — in the economy may be measured in terms of general government revenue and expenditure (which is often presented in relation to GDP). Subtracting expenditure from revenue results in a basic measure of the government surplus/deficit (public balance), providing information on government borrowing/lending for a particular year; in other words, borrowing to finance a deficit or lending made possible by a surplus. General government debt (often referred to as national debt or public debt) refers to the consolidated stock of debt (external obligations) at the end of the year for government and public sector agencies. These external obligations are the debt or outstanding (unpaid) financial liabilities arising from past borrowing. Note that the data presented in Figures 3 and 4 for some G20 members relate only to the expenditure of some but not all levels of public administration.

The level of general government expenditure in relation to GDP peaked among the G20 members in 2018 at 45.8 % in the EU-27 (in the euro area it was higher still, at 47.0 %), followed by 41.0 % in the United Kingdom and 40.7 % in Canada. For the majority of G20 members the ratio of government expenditure of GDP exceeded 30 %, with only four below this level: India, Mexico, South Korea and Indonesia. 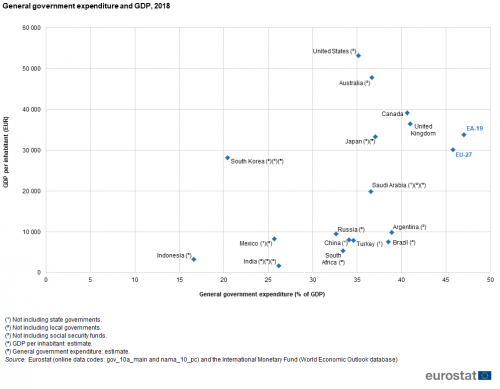 Among the G20 members, Brazil had the largest government deficit relative to GDP in 2018

Most G20 members had a government deficit in 2018; only South Korea and Russia recorded surpluses as can be seen from Figure 4. Deficits below 3.0 % of GDP were observed in Canada, the EU-27 (and the euro area), Australia, Indonesia, Mexico and the United Kingdom. The largest deficits were recorded in India (6.4 % of GDP) and Brazil (7.2 % of GDP). 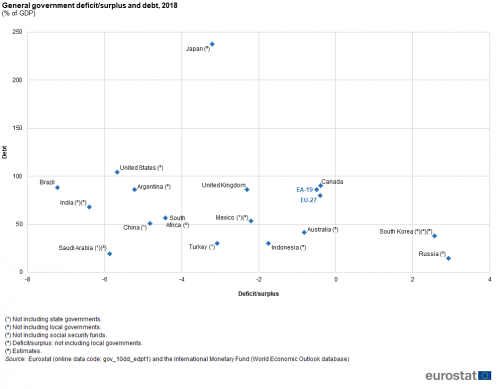 Consumer price indices reflect the developments over time in the prices of consumer goods and services acquired, used or paid for by households, and thereby provide a measure of inflation. They aim to cover the whole set of goods and services consumed within the territory of a country by the population. The rate of change in consumer price indices between 2017 and 2018 is presented in Figure 5 along with the 10-year annual average rate of change between 2008 and 2018. 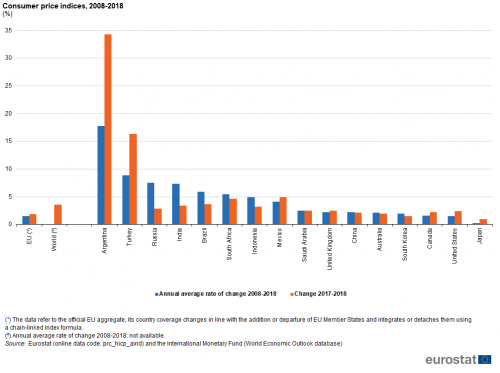 Argentina had the highest inflation rate among G20 members in 2018

Average price developments over a 10-year period indicate that the high inflation rate in Argentina for 2018 was representative of a more sustained period of rapid price increases, with annual inflation averaging 17.7 % between 2008 and 2018. The next highest annual average inflation rates were a little more than half the rate recorded in Argentina, as prices rose by an annual average of 8.9 % in Turkey, 7.5 % in Russia and 7.4 % in India. By contrast, Japan had clearly the lowest annual average inflation rate among the G20 members between 2008 and 2018, just 0.3 %, with the next lowest rates in the EU (1.5 %), the United States and Canada (both 1.6 %). 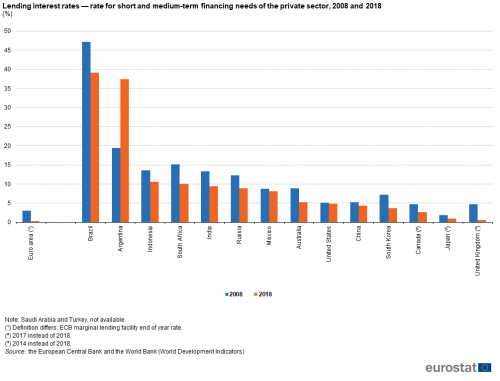 Foreign direct investment (FDI) is characterised by investment in new foreign plant/offices, or by the purchase of existing assets that belong to a foreign enterprise. FDI differs from portfolio investment as it is made with the purpose of having a lasting interest, by acquiring control or an effective voice in the management of the direct investment enterprise.

Figure 7 and Map 2 provide information concerning FDI stocks, in other words the value of all foreign direct investment assets, not the flows during a particular year. South Africa (2017 data), Canada, the EU-27 and the United Kingdom (2017 data) had by far the highest levels of outward stocks relative to the size of their economies in 2018, all in excess of 60 % of their GDP. The United Kingdom (2017 data) had the highest level of inward stocks relative to GDP and was one of only three G20 members — the others being the EU-27 and Canada — where inward stocks were valued at more than 50 % of their GDP. 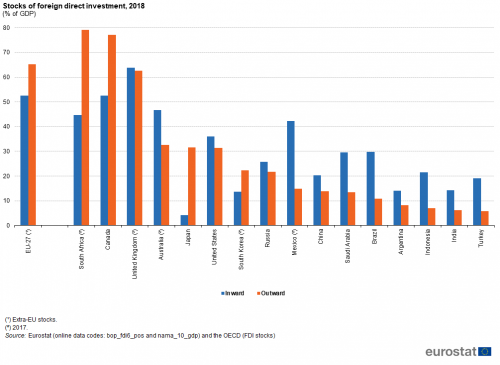 The data in Map 2 are based on the absolute value of FDI stocks held by G20 members and show shares in the world total. The EU-27 had the highest level of inward stocks (including FDI stocks between different EU Member States), accounting for 25.5 % of the world’s outward stocks in 2017; it also had the largest share of inward stocks, some 31.7 % of the world total. The United States, China and the United Kingdom were the second, third and fourth ranked G20 members both as investors abroad (in other words, outward investment) and as recipients of FDI (in other words inward investment) in their own economies. 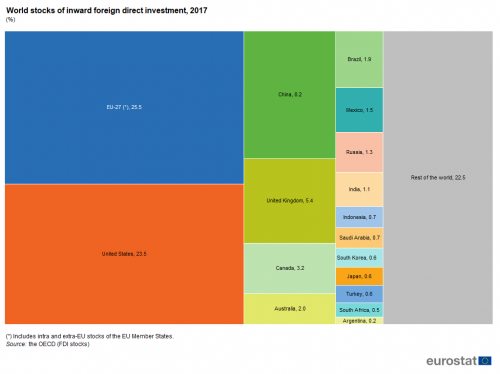 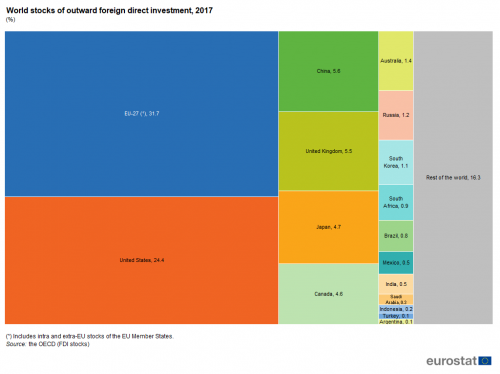 Official development assistance (ODA) concerns government aid designed to promote the economic development and welfare of developing countries. Loans and credits for military purposes are excluded. Aid may be provided bilaterally or channelled through a multilateral development agency. The OECD maintains a list of developing countries and territories with income per inhabitant below a certain threshold and only aid to these countries — currently around 150 in number — counts as ODA. A long-standing United Nations target is that developed countries should devote 0.7 % of their gross national income to ODA. 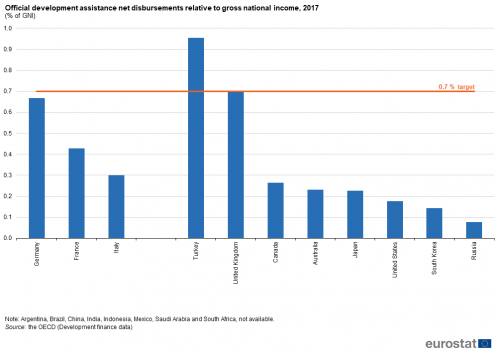 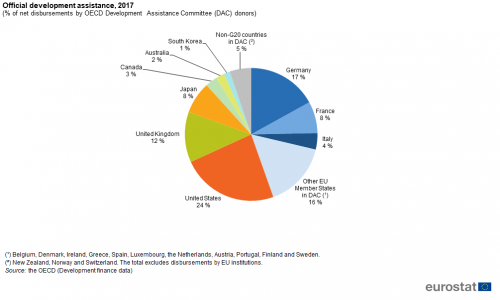 The indicators are often compiled according to international — sometimes worldwide — standards, for example, UN standards for national accounts and the International Monetary Fund's (IMF) standards for balance of payments statistics. Although most data are based on international concepts and definitions there may be certain discrepancies in the methods used to compile the data.

Nearly all of the indicators presented for the EU, the euro area and the United Kingdom have been drawn from Eurobase, Eurostat’s online database. Eurobase is updated regularly, so there may be differences between data appearing in this article and data that is subsequently downloaded. Data concerning interest rates in the euro area have been taken from the European Central Bank (ECB).

For the non-EU G20 members other than the United Kingdom, the data presented have been compiled by a number of international organisations, namely the IMF, the OECD, the United Nations Statistics Division and the World Bank. For some of the indicators shown a range of international statistical sources are available, each with their own policies and practices concerning data management (for example, concerning data validation, correction of errors, estimation of missing data, and frequency of updating). In general, attempts have been made to use only one source for each indicator in order to provide a comparable dataset for G20 members.

An analysis of economic performance and developments can be carried out using a wide range of statistics, covering areas such as national accounts, government finance statistics, exchange rates and interest rates, consumer prices, and the balance of payments. These indicators are also used in the design, implementation and monitoring of economic policies.

GDP is the most commonly used economic indicator and it provides a measure of the size of an economy. It is the sum of the gross value added of all resident institutional units (‘domestic’ production) engaged in production, plus any taxes, and minus any subsidies, on products not included in the value of their outputs. It is also equal to i) the sum of the final uses of goods and services (all uses except intermediate consumption), minus the value of imports of goods and services; ii) the sum of primary incomes distributed by resident producer units. By contrast, GNI is the sum of gross primary incomes receivable by residents, in other words, GDP less income payable to non-residents plus income receivable from non-residents (‘national’ concept).

GDP per inhabitant is often used as a broad measure of living standards, although there are a number of international statistical initiatives to provide alternative and more inclusive measures (such as GDP and beyond).

A volume measure of GDP is intended to allow comparisons of economic developments over time, as the impact of price developments (inflation) has been removed. The use of a time series of a volume measure of GDP shows the ‘real’ change in GDP. Equally, international comparisons can be facilitated when indicators are converted from national currencies into a common currency using PPPs rather than market exchange rates. PPPs reflect price level differences between countries: in this article gross national income per inhabitant is presented in international United States dollars (USD) having been converted using PPPs.