The EU in the world - agriculture, forestry and fisheries

Australia had the largest production of meat relative to population size in 2018 among G20 members.

Between 1990 and 2015, among G20 members the share of land covered by forests decreased most strongly in Indonesia. 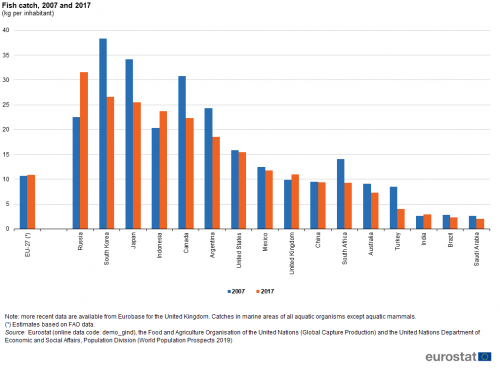 This article is part of a set of statistical articles based on Eurostat’s publication The EU in the world 2020. It focuses on statistics related to agriculture, forestry and fishing in the European Union (EU) and the 16 non-EU members of the Group of Twenty (G20) and gives an insight into the EU’s agriculture, forestry and fisheries activities in comparison with (most of) the major economies in the rest of the world, such as its counterparts in the so-called Triad — Japan and the United States — and the BRICS composed of Brazil, Russia, India, China and South Africa.

Among the G20 members, the ratio of the total agricultural area to the land area in 2017 was 72.0 % in the United Kingdom, 60.4 % in India and between 54 % and 56 % in China, Mexico and Argentina. The share of agricultural land within the total land area was below 50.0 % among the other G20 members, below one fifth in South Korea, Russia and Japan, and below one tenth in Canada.

In 2017, more than half of the land area in Japan, South Korea and Brazil was forested, while the shares in Russia and Indonesia were just below half. Among the other G20 members, Australia, Turkey and the United Kingdom recorded shares that were within the range of 10-20 %, while the lowest share of land that was covered by forests was in Argentina (9.9 %).

Comparing these two ratios it can be seen that the agricultural share (2016 data) of the EU-27’s land area was just 0.9 percentage points larger than its forest share (2015 data). The other G20 members reported much less balanced positions between these two ratios. A small majority recorded larger agricultural than forest areas, with the largest difference observed in the United Kingdom where the agricultural area in 2017 was 59.0 points higher than the forest area in 2015. Six of the G20 members — Indonesia, Brazil, Canada, Russia, South Korea and Japan — recorded larger forest than agricultural areas, with the difference in Japan reaching 56.3 points. 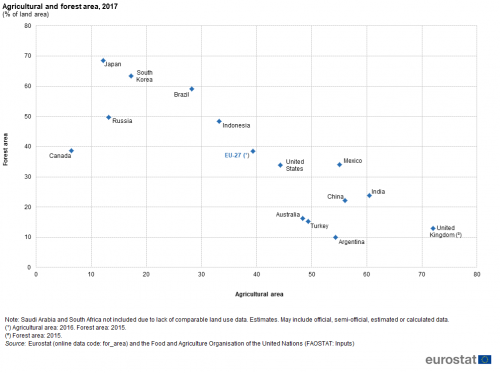 Figure 1: Agricultural and forest area, 2017
(% of land area)
Source: Eurostat (for_area) and the Food and Agriculture Organisation of the United Nations (FAOSTAT: Inputs)

Less than one tenth of the workforce was active in agriculture, forestry and fisheries in most G20 members in 2018

In most G20 members, agriculture, forestry and fishing accounted for less than one tenth of total employment in 2018, according to data from the United Nations’ International Labour Organisation (ILO). Nevertheless, this share exceeded one quarter in China (27.0 %) and Indonesia (29.6 %) and exceeded two fifths in India (43.3 %). The employment share of agriculture, forestry and fisheries in the EU-27 was 4.5 %.

In nearly all G20 members — India and Turkey were the only exceptions — the employment share of agriculture, forestry and fisheries in 2018 was higher for men than for women (see Figure 2). This was most notably the case in Mexico where there was a difference of 14.8 points between the two shares and in Brazil where the difference was 9.0 points. In the EU-27, 5.5 % of men in employment worked in these activities compared with 3.3 % of women, a difference of 2.2 points. In Turkey and India the proportions of women working in agriculture, forestry and fisheries were 11.2 points and 15.5 points higher than for men. In India, more than half (55.5 %) of all women worked in these activities, by far the highest share among the G20 members. 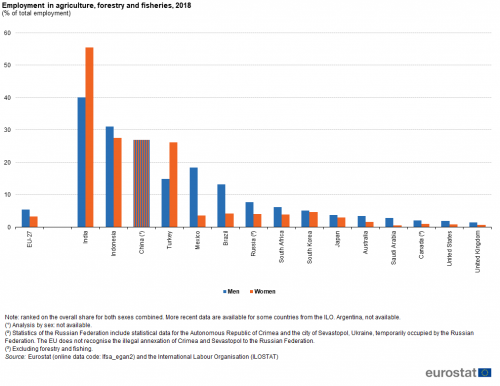 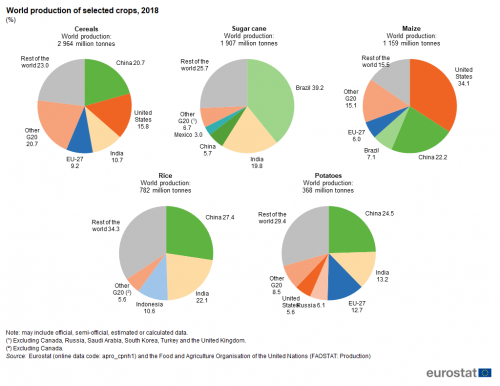 The share of world production for a selection of meat products and for milk is presented in Figure 4. Meat production covers the carcass weight of slaughtered animals whose meat is declared fit for human consumption. The G20 members produced nearly four fifths (79.1 %) of the 342 million tonnes of meat produced worldwide in 2018, with China, the EU-27, the United States and Brazil collectively producing 60.8 % of the world total. The G20 members were particularly specialised in the production of pig meat, accounting for 88.3 % of the world total, while the lowest share for G20 members for the types of meat shown in Figure 4 was 54.6 % for sheep and goat meat. 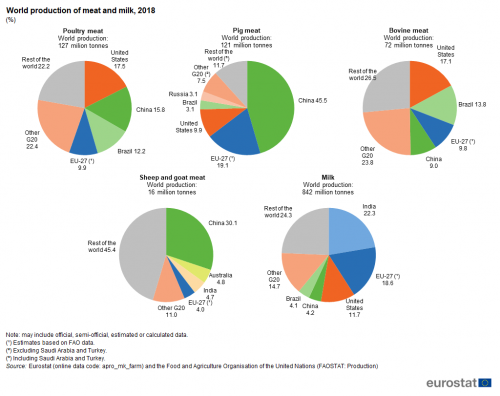 Figure 4: World production of meat and milk, 2018
(%)
Source: Eurostat (apro_mk_farm) and the Food and Agriculture Organisation of the United Nations (FAOSTAT: Production)

More than half of the total meat production of the four selected meat products shown in Figure 4 in Argentina was cattle meat, while a similar level of specialisation was recorded in China, South Korea and the EU-27 for pig meat, and in Saudi Arabia, Indonesia, Turkey, Japan, South Africa and Brazil for poultry meat. In several countries, the relatively low levels of meat production in general and of some types of meat in particular reflect, at least to some degree, predominant religious beliefs.

Among G20 members, Australia had the largest production in 2018 of both milk and meat relative to population size 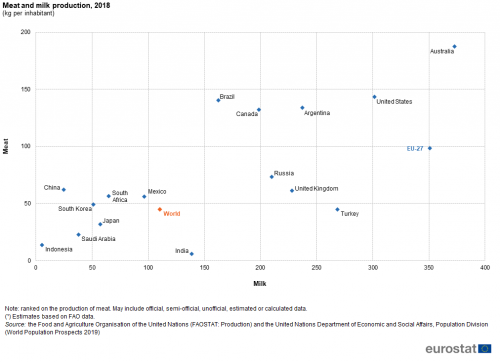 Forests occur under a huge variety of climatic, geographic, ecological and socio-economic conditions and are an essential part of the natural environment. They have an impact on water resources, act as a stabiliser for the Earth’s climate, provide shelter to animal and plant life, provide food, medicinal and cosmetic resources, genetic breeding stock, seeds for cultivation, wood and similar materials to be used for manufacturing, construction and as a fuel. Forestry also provides employment in many rural areas and diverse opportunities for outdoor recreation attracting tourists.

Among G20 members, between 1990 and 2015 the forest area decreased most strongly in Indonesia 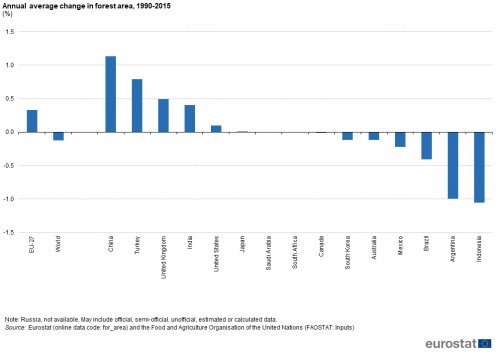 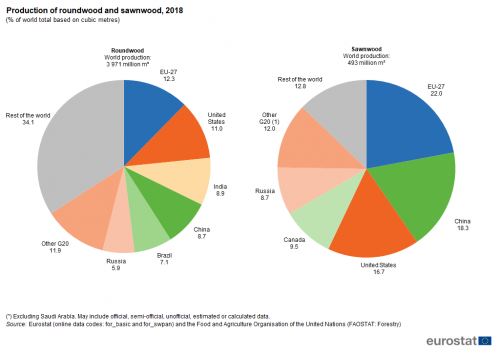 Figure 7: Production of roundwood and sawnwood, 2018
(% of world total based on cubic metres)
Source: Eurostat (for_basic) and (for_swpan) and the Food and Agriculture Organisation of the United Nations (FAOSTAT: Forestry)

The EU-27 was also the largest producer of sawnwood, with an output of 109 million m3 in 2018, equivalent to 22.0 % of the world total. Sawnwood is produced either by sawing lengthways or by a profile-chipping process and, with a few exceptions, is greater than 6 millimetres (mm) in thickness. Sawnwood production in China and the United States was somewhat less than in the EU-27, contributing 18.3 % and 16.7 % to the world total. Collectively the G20 members (excluding Saudi Arabia) produced 87.2 % of world sawnwood production, a considerably greater share than for roundwood.

Aside from fish farming, fish are not owned until they have been caught, and so fish stocks continue to be regarded as a common resource, requiring collective management. This has led to a range of policies and international agreements that regulate the amount of fishing, as well as the types of fishing techniques and gear used to catch fish.

The fish catch refers to all catches of fishery products (including fish, molluscs, crustaceans and other aquatic animals, residues and aquatic plants) taken by all types and classes of fishing units that are operating in inland, inshore, offshore and high-seas fishing areas: the small quantity of aquatic mammals that are caught have been excluded from the data shown in Figure 8 for reasons of comparability. The catch statistics exclude quantities of fishery products which are caught but which, for a variety of reasons, are not landed.

The largest fish catch relative to population size in 2017 among G20 members was reported for Russia, more than three times the level for the EU-27 in 2015

Aquaculture (also known as fish farming) refers to the farming of aquatic (freshwater or saltwater) organisms, such as fish, molluscs, crustaceans and plants for human use or consumption, under controlled conditions. Aquaculture implies some form of intervention in the natural rearing process to enhance production, including regular stocking, feeding and protection from predators. 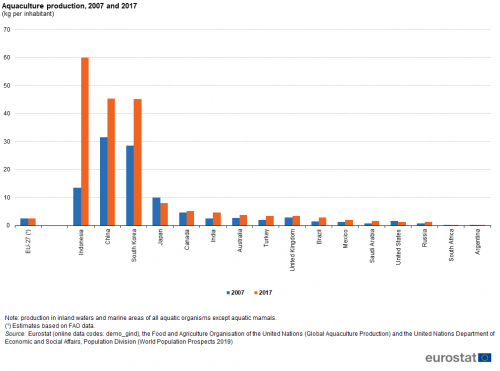 Some of the indicators presented for the EU and the United Kingdom have been drawn from Eurobase, Eurostat’s online database. Eurobase is updated regularly, so there may be differences between data appearing in this article and data that is subsequently downloaded. The remainder of the data for the EU and for the United Kingdom have been extracted from international sources for reasons of comparability or availability.

For the non-EU G20 members other than the United Kingdom, the data presented have been compiled by a number of international organisations, namely the Food and Agricultural Organisation, the International Labour Organisation, the United Nations Department of Economic and Social Affairs, and the World Bank. For some of the indicators shown a range of international statistical sources are available, each with their own policies and practices concerning data management (for example, concerning data validation, correction of errors, estimation of missing data, and frequency of updating). In general, attempts have been made to use only one source for each indicator in order to provide a comparable dataset for G20 members.

The importance of agriculture, forestry and fishing goes far beyond their simple economic function, reflecting the role of these activities within society and the contribution and impact of their resources on the environment. In this respect, some of the most frequently discussed concerns include the protection of the environment, sustainable practices for farming, forestry and fishing, food safety and security, animal welfare and broader perspectives relating to rural development.

Production and utilization of milk on the farm - annual data (apro_mk_farm)

Food and Agriculture Organization of the United Nations