In the EU-28 there were 19.8 million tertiary education students in 2017, of which 61 % were studying for bachelor’s degrees.

In 2017, women accounted for 54 % of all tertiary students in the EU-28; however, a majority of the students following doctoral studies were men.

In 2017, nearly one quarter of tertiary education students in the EU-28 were studying business, administration or law.

This article presents statistics on tertiary education (ISCED levels 5-8) in the European Union (EU) and forms part of an online publication on education and training in the EU. Tertiary education — provided by universities and other higher education institutions — is the level of education following secondary schooling. It is seen to play an essential role in society, by fostering innovation, increasing economic development and growth, and improving more generally the well-being of citizens. Some European universities are among the most prestigious in the world.

Many commentators predict that in the coming years there will be increased demand for highly skilled people; indeed, skills gaps already exist in some EU Member States. Driven by digital technology, jobs are becoming more flexible and complex. This has resulted in a growing number of employers seeking staff with the necessary capacities to manage complex information, think autonomously, be creative, use resources in a smart and efficient manner, as well as communicate effectively.

A relatively large number of students in tertiary education are internationally mobile and study abroad: an analysis of this phenomenon is available in a separate article.

Table 1 presents data on the number of students in each of four levels of tertiary education. Bachelor’s, master’s and doctoral levels of tertiary education are found in all EU Member States, while short-cycle tertiary education, which is typically vocationally-oriented (occupationally-specific) to prepare students for the labour market, is not part of the education system in Bulgaria, Estonia, Greece, Lithuania, Romania and Finland, nor in Liechtenstein, Montenegro, North Macedonia or Serbia. It is also quite uncommon in several others, for example Czechia, Germany, Croatia and Poland.

Short-cycle tertiary courses were most common in France and Spain where they accounted for almost one fifth of all tertiary students (19.8 % and 19.5 % respectively); they were also relatively common in Latvia and Austria where they accounted for shares between 17 % and 18 %. In Turkey, short-cycle tertiary courses were even more common as just over one third (35.5 %) of all tertiary students were enrolled in such courses.

Less than one fifth of all tertiary students were studying for a master’s degrees in 2017 in Belgium, the United Kingdom, Spain and Ireland (as well as Serbia among the candidate countries), with this share falling below one tenth in Greece (as well as in Turkey, Montenegro and North Macedonia). By contrast, more than one third of tertiary students were studying for master’s degrees in Portugal, Germany, Czechia, Luxembourg, France, Italy, Croatia, Slovakia and Cyprus.

In 2017, the highest proportion of tertiary students studying for doctoral degrees among the EU Member States was 9.1 % in Luxembourg, while a higher share was recorded in Liechtenstein (16.1 %) — see Table 1. Aside from these relatively small countries, the next highest shares (among the EU Member States) were recorded in Czechia (6.7 %) and Germany (6.4 %), while among the non-member countries shown in Table 1 a share of 8.3 % was recorded in Switzerland. Within the EU, the lowest share of doctoral students in the total number of tertiary education students was observed in Malta (1.0 %); lower shares were recorded in North Macedonia and Montenegro.

Participation of men and women in tertiary education

For the two tertiary education levels with smaller student populations the situation was more mixed. For short-cycle courses, 9 out of 22 Member States for which data are available had more male than female students, while men were in a majority among doctoral level students in just over half (15 out of 28) of the EU Member States.

Approximately 4.8 million students graduated from tertiary education in the EU-28 in 2017. The United Kingdom (784 000) had the largest number of tertiary graduates in 2017, followed by France (781 000), some way ahead of Germany (569 000; note the figures shown for Germany exclude graduates of vocational academies) and Poland (517 000). The relatively high number of graduates in the United Kingdom and France may, at least to some extent, reflect a shorter average course length; for example, France had the highest proportion of tertiary students attending short-cycle courses of any EU Member State and bachelor degree courses in the United Kingdom typically last three years. 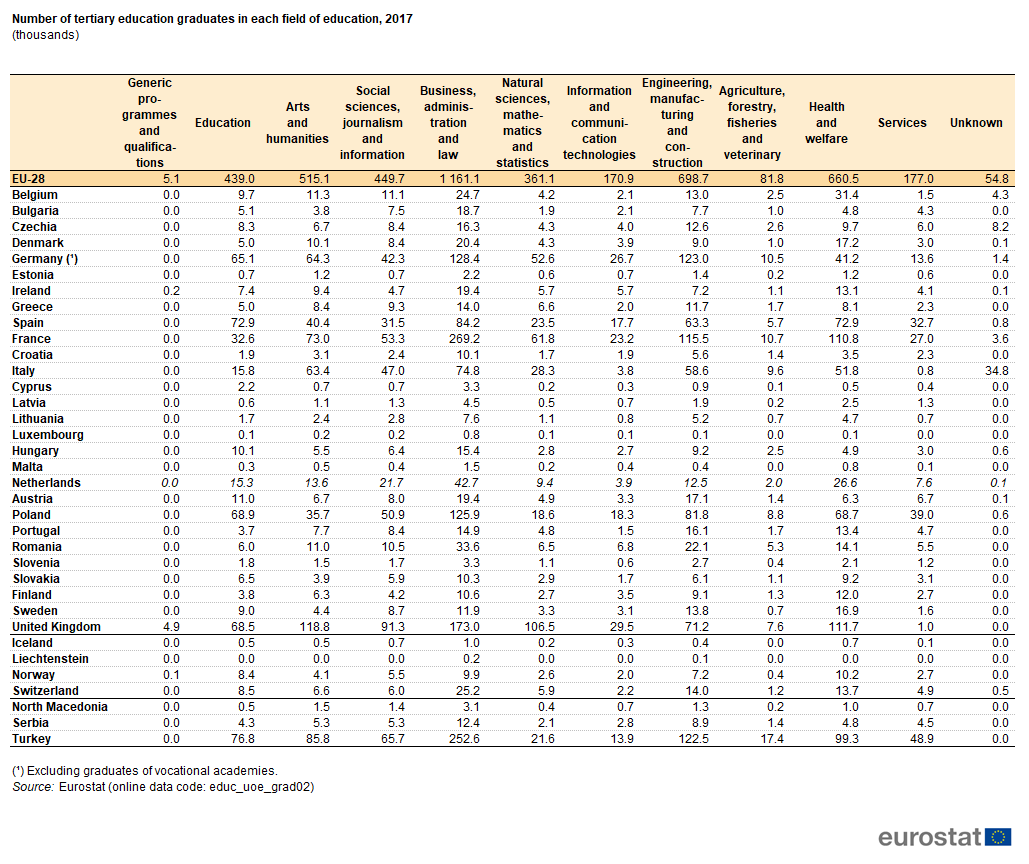 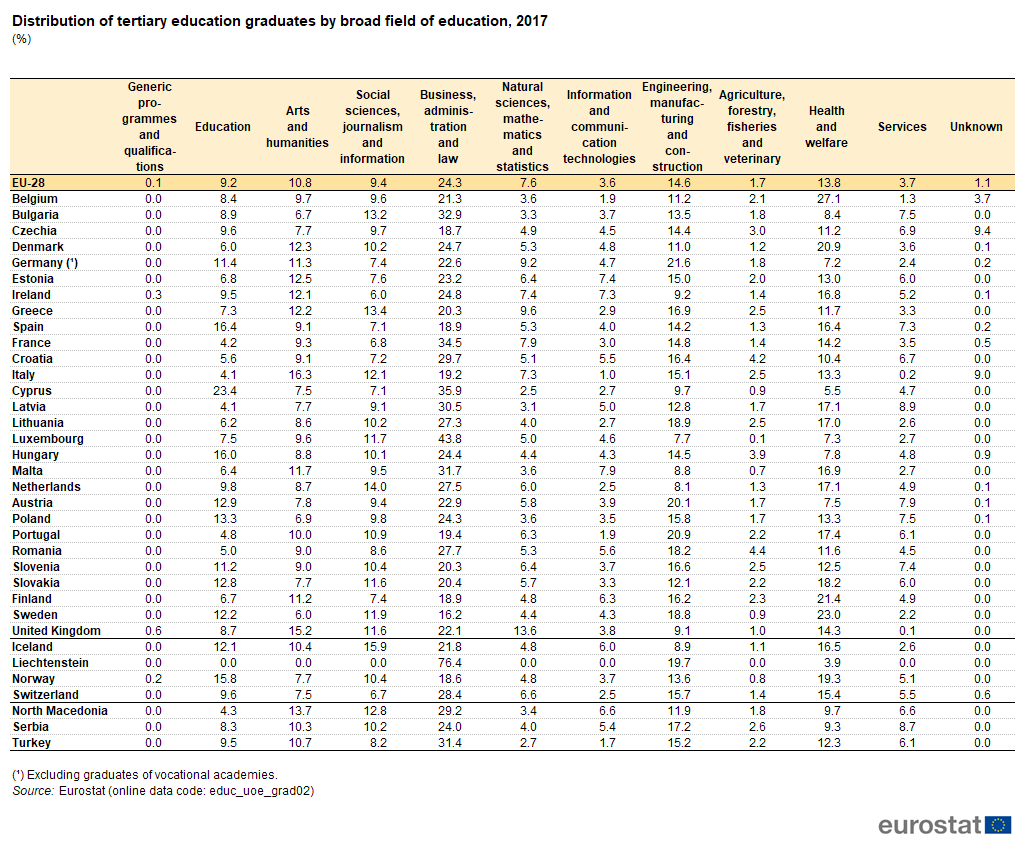 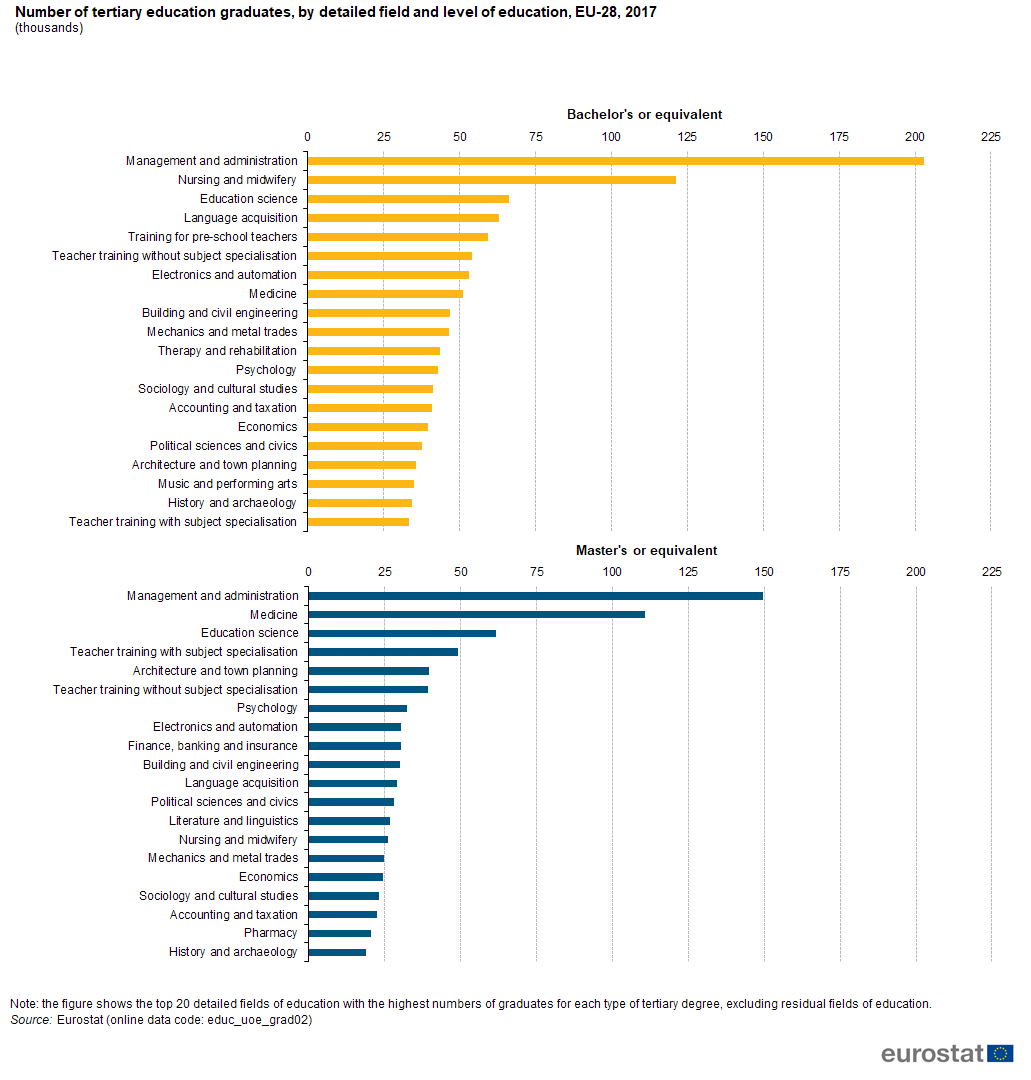 In 2017, student-academic staff ratios in tertiary education averaged 15.4 across the EU-28 (excluding Denmark and Ireland). Among the EU Member States, the highest student-staff ratios were recorded in Greece (38.7), while ratios of at least 20 students per staff member were also recorded in Belgium, Cyprus and Italy. By contrast, student-staff ratios were in single figures in Luxembourg (7.2 students per staff member) and Malta (9.7) and were also relatively low in Sweden and Denmark (2015 data). 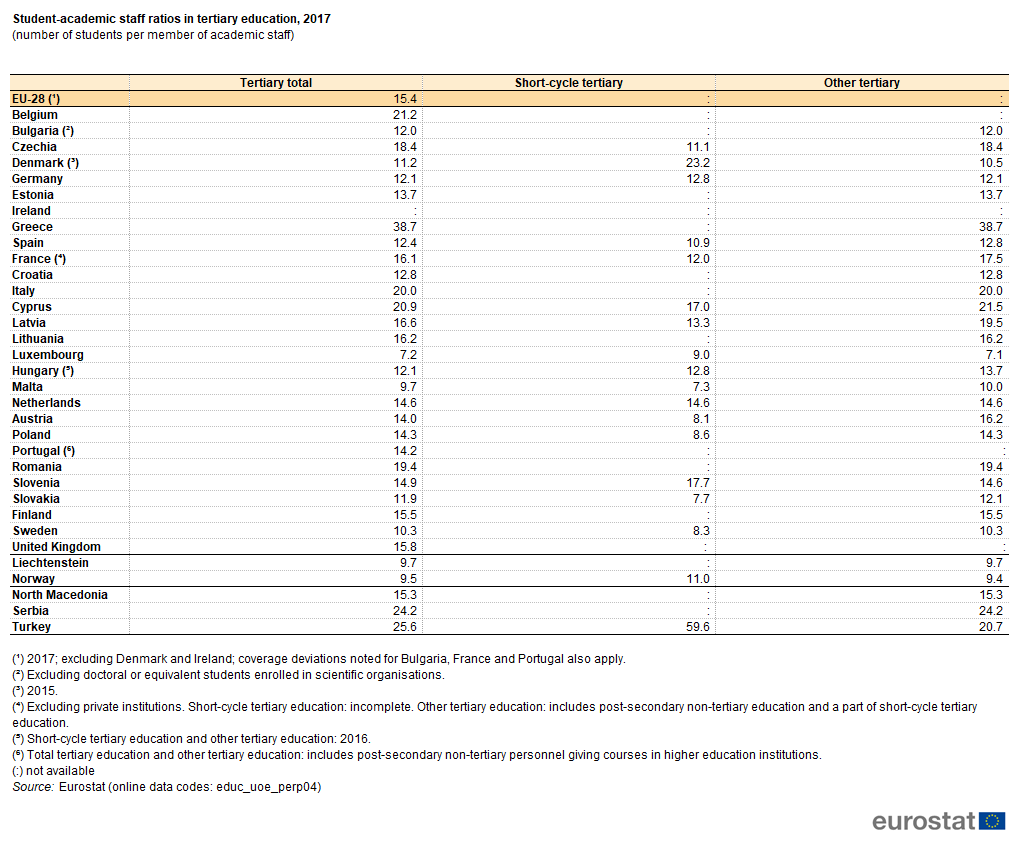 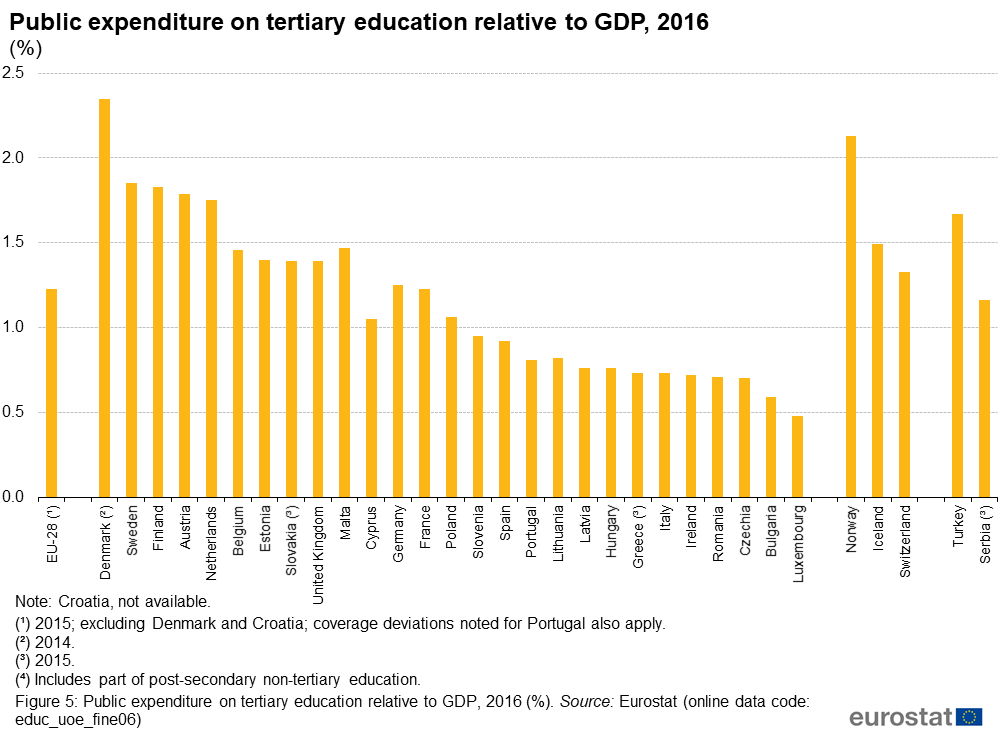 There is usually a clear hierarchy between qualifications granted by tertiary education programmes. The transition between programmes at tertiary level is, however, not always clearly distinguished and it may be possible to combine programmes and transfer credits from one programme to another. In certain cases, credits received from previously completed education programmes may also be counted towards the completion of a programme at a higher ISCED level. That said, the successful completion of ISCED level 7 is usually required for entry into ISCED level 8.

Eurostat data by fields of education were classified according to ISCED 1997 and ISCED 2011 classifications (which were the same in terms of the fields of education) until 2015. However, they were subsequently replaced by the ISCED-F 2013 classification and Eurostat data from 2016 onwards are classified according to this classification (which has been used as the basis of the information presented within this article). The fields of education — as classified by ISCED-F 2013 — are broad domains, branches or areas of content covered by an education programme or qualification. The classification was designed principally to describe and categorise fields of education and training at the secondary, post-secondary and tertiary levels of formal education. It has a three-level hierarchy based on broad fields (the highest level), narrow fields (the second level) and detailed fields (the third level) of education. The 11 broad fields include: generic programmes and qualifications; education; arts and humanities; business, administration and law; natural sciences, mathematics and statistics; information and communication technologies; engineering, manufacturing and construction; agriculture, forestry, fisheries and veterinary; health and welfare; and services.

Since the introduction of the Bologna process (see the article on Education and training statistics introduced) a major expansion in higher education systems has taken place, accompanied by significant reforms in degree structures and quality assurance systems. However, the global financial and economic crisis affected higher education in different ways, with some EU Member States investing more and others making radical cutbacks in their tertiary education spending.

While the Bologna process put in motion a series of reforms to make European higher education more compatible, comparable, competitive and attractive for students, it is only one strand of a broader effort concerning higher education. To establish synergies between the Bologna process and the Copenhagen process (for enhanced European cooperation in vocational education and training), the European Commission and EU Member States have established a European qualifications framework for lifelong learning (EQF).

Higher education institutions are crucial partners in delivering the EU’s strategy to drive forward and maintain growth: the Europe 2020 strategy for smart, sustainable and inclusive growth has set a target that 40 % of people aged 30-34 years in the EU-28 should have a higher education qualification by 2020. Improving the performance of education and training systems at all levels and increasing participation in tertiary education is also one of the integrated economic and employment guidelines that were revised as part of the Europe 2020 strategy.

The strategy sets a number of benchmarks to be achieved by 2020, including the above-mentioned target that the share of 30-34 year-olds with tertiary educational attainment should be at least 40 %. Two supplementary benchmarks on learning mobility were adopted by the Council in November 2011. The first of these sets a target for 2020 whereby an average of at least 20 % of higher education graduates in the EU-28 should have had a period of higher education-related study or training (including work placements) abroad, representing a minimum of 15 European credit transfer and accumulation system (ECTS) credits or lasting a minimum of three months. A second benchmark on employability was added in May 2012: namely, that by 2020, the EU-28 share of employed graduates aged 20-34 having left education and training no more than three years before the reference year should be at least 82 %.

The Erasmus programme was one of the most well-known European programmes and ran for just over a quarter of a century; in 2014 it was superseded by the EU’s programme for education, training, youth and sport, referred to as Erasmus+. In the field of higher education, Erasmus+ gives students and academic staff the opportunity to develop their skills and boost their employment prospects. Students can study abroad for up to 12 months (during each cycle of tertiary education). More than two million higher education students are expected to take part in Erasmus+ during the 2014-2020 period, including an estimated 25 thousand students in joint masters’ programmes.