Supply and use tables - input-output analysis

This article describes supply, use and input-output tables as they are constructed and used in the European Union (EU). Measuring production in an economy is essential in order to calculate gross domestic product (GDP). Vast amounts of information are needed to capture this process where input of labour, capital, goods and services results in produced outputs of goods and services. Statisticians and economists use a statistical and analytical framework called supply, use and input-output tables to organise this information.

Since 2011 consolidated European supply, use and input-output tables are available allowing macro-analysis.

In May 2011 Eurostat has published for the first time ever a consolidated annual supply-use system and derived input-output tables for the European Union and the euro area. These tables show at a glance the production and use of products distinguishing 59 industry branches and 59 product groups.

Table 1 (downloadable Excel file) illustrates the data contained in the supply and use tables, aggregated to six product groups and six sectors.

Under the European system of national and regional accounts (ESA95), EU Member States transmit to Eurostat supply and use tables annually and input-output tables 5-yearly. For each Member State, the supply use tables (SUTs) at basic prices were estimated with the available supply use tables (at purchaser's prices) and (in part confidential) auxiliary valuation data. Due to confidentiality reasons, the supply-use tables at basic prices are published only at the level of EU-27 and euro area.

The European tables published up to 2011 were using the NACE rev 1.1 classification. The national accounts domain as a whole has implemented the NACE rev 2. classification from the reference year 2008 onwards. Then end 2011, three years after the end of the reference year 2008 (regulatory transmission deadline), Member states started to transmit data in NACE rev 2. The requirement is to provide data from the year 2008 onwards. No backdata are mandatory. In October 2012, the first data in NACE Rev 2. classification has been published.

Supply and use tables serve primarily statistical purposes and provide an integrated framework for checking consistency and completeness of national accounts data.

In order to make GDP calculations more reliable, statisticians use three different methods: the production, the income and the expenditure approach; these three methods may generate different results. In order to eliminate those differences and to find the most accurate result, statisticians often use supply-and-use tables as a balancing framework that reconciles the three methods of GDP estimation.

The supply and use tables provide the main macroeconomic aggregates such as GDP, components of value added and output by industry, import, final consumption, gross capital formation and export.

The supply table describes the supply of goods and services, which are either produced in the domestic industry or imported. The use table shows where and how goods and services are used in the economy. They can be used either in intermediate consumption — meaning in the production of something else — or in final use, which in turn is divided into consumption, gross capital formation and export. Furthermore the use table shows the income generated in the production process.

Concrete example: supply and use of cars

To make this concrete, imagine an economy with three industry sectors: agriculture, manufacturing and services, while for simplicity we follow only one product in our example: cars. These cars are either produced domestically or imported. That is a short description of the supply side.

Secondly there are different sorts of final use. When a car is sold to a consumer, then it has been used for final consumption. But when a car is sold to a catering firm or a farmer for professional use, it has been used as an investment (capital formation). Finally the car can be exported to another country. The sum of all these different uses should equal the total supply for each product. Since supply and use are recorded in monetary terms it is required that both are valued in the same way, either in basic prices or at purchasers’ prices. 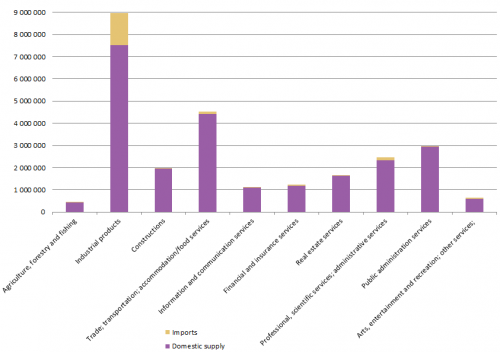 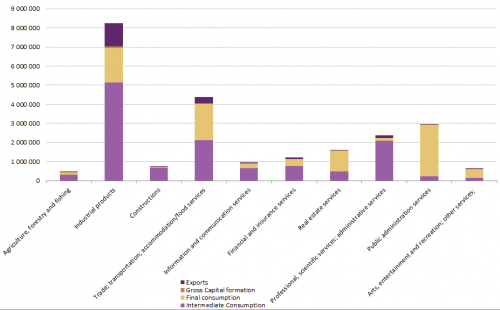 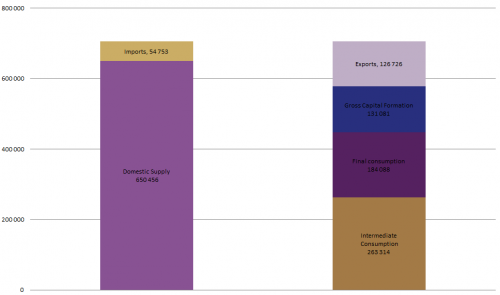 Analysing the economy with input-output tables

The input-output analysis has been developed by the economist Wassily Leontief in the 1930s describing inter-industry relations in the economy. A product by product input-output gtable shows how much of each product is being used as input for the production of another product. Similarly, it also shows how much of each product is consumed by different user categories (production, households, government, non-profit institutions serving households, investment and foreign trade).

During the period 2000 to 2007 the production of exported manufactured products accounted annually on average for 68 % of the embodied employment in EU-27 exports. This annual average share rises to 71 % if the euro area countries are considered. Trade, hotels, restaurants and transport services amounted to nearly 20 % of the embodied employment and financial and real-estate services to around 9 % for the EU-27; the proportions were 18 % and 7 %, respectively, for the euro area countries. In 2007, manufactured products exported by the EU-27 employed directly and indirectly nearly 17 million persons, while trade, hotels, restaurants and transport services accounted for 5.6 million persons employed. The euro area required fewer persons for the production of its manufactured exports (around 16 million persons) and the exports of trade, hotels, restaurants and transport services (4.8 million persons). The total number of persons employed by firms engaged in exporting activities (directly and indirectly) in the euro area grew by an annual average rate of 2.6 % from 2000 to 2007 while for the EU-27 the figure was only 1.6 %. Financial and real-estate services contributed most to the increase in embodied employment in exports in both the euro area and the EU-27 (6.4 % and 6.0 % of annual average growth 2000-2007, respectively). They were followed by trade, hotels, restaurants and transport services with annual average growth rates of 4.8 % in the euro area and 3.7 % in the EU-27. During the same period, there were significant reductions in embodied employment in exported agricultural products ( 2.1 %) and other services including activities of households (-1.1 %) for the EU-27; for the euro area, these figures were still slightly positive, +0.6 % and +0.3 %, respectively.

The input-output modelling permits, for instance, to answer the question of how many jobs depend on exports. As a production factor input into industrial branches, labour is a significant component of GDP: in 2006 for EU-27 compensation of employees constituted 57 % of total value added (Table 2). Through the input-output table and a Leontief model, one can estimate that the exports of products outside the EU count for about 11 % of job-related income. In 2006 in EU-27, the public services (including health and social) and the construction were the first two sectors creators of jobs (see article this example was taken from).

Depending on which assumption on technology and sales structure is made, the supply and use tables can be transformed into symmetric input-output tables. At the European level, the consolidated EU-27 and euro area (EA-17) supply and use tables were subsequently transformed into symmetric product by product input-output tables (IOTs) using the so-called industry technology assumption (see Model B in Eurostat Manual of Supply, Use and Input-Output Tables, p. 349).

The product-by-product IOT for EU-27 is shown in Table 2 (downloadable Excel file).

European input-output tables have been extended to the environmental accounts by modeling-estimations. The environmentally extended supply, use and input-output tables (EE-SUIOT) have been used to estimate the CO2 emissions induced by the final use of products within the EU (data on emissions of 7 other gases are also available). Beside the CO2 emissions emitted by EU industries in order to create products for final use, this estimate also takes into account CO2 emissions "embodied" in imports to the EU. The latter arise along the worldwide production chains of imported products. CO2 emissions "embodied" in products exported out of the EU go on the account of consumers abroad (see full article).