Highlights
Tweet
In 2014, around 43 % of the the EU population practised some physical activities at least once a week.
Tweet
Less than a third of the EU population attended a live sport event in 2015.
[[File:Statistics on participation in sport 2021.xlsx]]

Practising sport, fitness or recreational (leisure) physical activities at least once a week, 2014

It is widely recognised that participation in sport has a significant positive impact on people’s health and quality of life. It can take two different forms: professional sport and sport as a leisure activity.

This article presents statistics on participation in sport available in Eurostat and related to:

Practising sport has a positive influence on personal health and well-being. In addition, team sports foster players’ communication skills and build team spirit and self confidence. Achieving a sport or fitness goal can motivate people to achieve other goals. Individuals’ participation in sport is affected by many factors, most obviously gender, age and economic situation — these aspects are analysed here on the basis of the results from the European Health Interview Survey (EHIS) .

In 2014, some 43 % of the EU-27 population aged 15 or over reported that they practised sport at least once a week (see Figure 1). However, discrepancies between countries were very large — the proportion ranged from over 70 % in Nordic countries and Austria to around 10 % or less in Bulgaria and Romania.

In general, women practise sport less than men, but there are exceptions

In the EU-27 as a whole, in 2014, more men than women took part in regular sport and physical activity - 45 % as against 40 % (see Figure 1). The gender gap was particularly marked in Portugal and Spain, with around 10 percentage points (p.p.) difference. In Bulgaria and Romania, few people practise sport and the percentage of men who did was around twice that of women.

On the other hand, in the five EU Member States where participation in sport was most common (Denmark, Germany, Finland, Sweden and Austria), the percentage of women than took part in sport and leisure activities was higher or equal than the one for men. The gap in favour of women was highest in Denmark (6 p.p.).

In general, the practice of physical activities decreases with age. In 2014, the percentage of people in the EU taking part in sport ranged from 62 % among 15-24-year-olds to 30 % in the 65+ age group (see Table 1). The biggest gaps were recorded in the Czechia and Slovakia (58 and 55 percentage points respectively), and the smallest (11 percentage points) in Denmark and Cyprus.

In the Nordic countries, Austria and Germany, a majority of people aged 65 and beyond still took part in physical activity. Their participation rate was higher than the one observed for young people in several other EU countries. 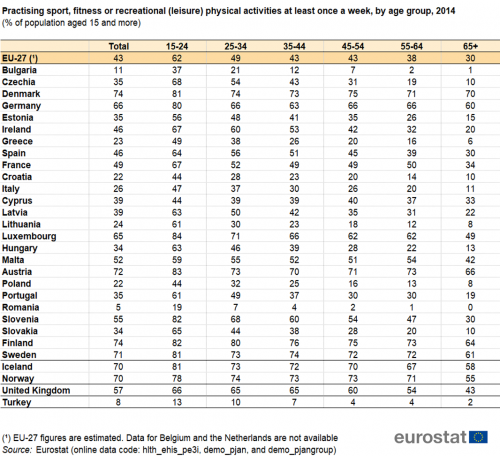 People with lower incomes are less likely to practise sport

The cost of participating in sport and recreational activities may be one of the barriers to wider involvement. In 2014, in the EU as a whole, nearly 53 % of people in the top income group practised sport, as against 35 % of people with the lowest incomes (see Figure 2). The biggest differences between those in the first and fifth income quintiles were recorded in Slovenia (37 p.p.), followed by Hungary (33 p.p.), Estonia (32 p.p.) and France (30 p.p.); Ireland, Sweden and Romania recorded the smallest disparities (2-3 p.p.).

Obviously, some sports are expensive and less accessible for people on low incomes. However, walking, for example, does not cost anything. The level of people’s involvement in sport can probably be explained also by other factors that are not directly financial but are associated with higher income (e.g. higher educational attainment, social background and position, greater awareness of the benefits of physical activity, maybe more free time, etc.).

As regards attendance at live sport events, the question in the EU-SILC 2015 ad hoc module on social and cultural participation referred only to physical attendance of organised events as a spectator, i.e. watching an event on TV/computer was excluded, as was the active participation of the players themselves.

Attending sport events does not only reflect an interest in sport competitions but also brings people together, i.e. has important ‘socialising’ value.

In the majority of countries, people going to sport events at most three times a year were relatively more numerous that those who attended at least four times a year. In eight countries, however, this pattern was inverted. 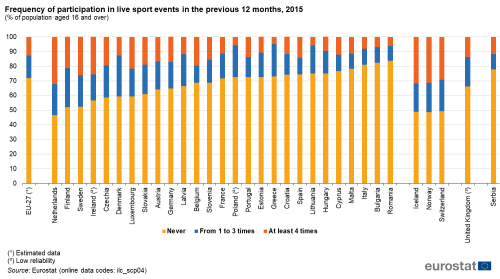 In 2015, some 39 % of men in the EU reported attendance at live sport events, as against 22 % of women. In no Member State did women participate more than men in such events, but the width of this ‘gender gap’ varied across countries (see Figure 4). It was smallest in the Netherlands (58 % of men and 49 % of women), while in 12 Member States the participation rate of men was at least twice as high as that observed among women.

There is a wide ‘generation gap’, in terms of attendance at live sport events, between young people (aged 16-24) and older people (aged 50 or over), at both EU and country level. 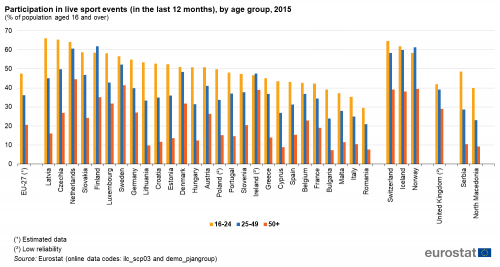 In the EU, more than half of non-participants in live sport events are not interested in them

In the 2015 EU-SILC ad hoc module, interviewees were asked about their main reason for not participating in sport events. They were given a choice between four answers:

At EU level, the main reported reason was a lack of interest (52 %). The countries that scored highest in this respect were Greece (74 % of non-participants), Austria (73 %) and the Netherlands (70 %) - see Table 2. Nevertheless, it should be underlined that the question in the survey did not allow a distinction to be made between ‘no interest in the event’ and ‘no interest in attending the event’. It is possible that some of the people who declared a lack of interest understood the question in the second sense (i.e. they were interested in one or more events but preferred to watch them on TV or via the internet).

In the EU as a whole, financial reasons for non-participation in live sport events were reported by 11 % of respondents but the percentages were higher in nine Member States and in particular in Greece (20 %), Spain (19 %), Romania and Bulgaria (both 16 %), Lithuania (15 %) and Slovenia (14 %).

As regards ‘lack of proximity’, it is important to note that ‘nearby’ should be understood as being determined not only by physical distance but also by accessibility. If, for example, a venue was easily accessible by public transport, despite being quite far from a person’s home, it should be considered as being nearby. At EU level, only 5 % of people reported lack of proximity as a main reason for non participation in sport events, with the highest proportions in Romania (21 %) and Finland (10 %). 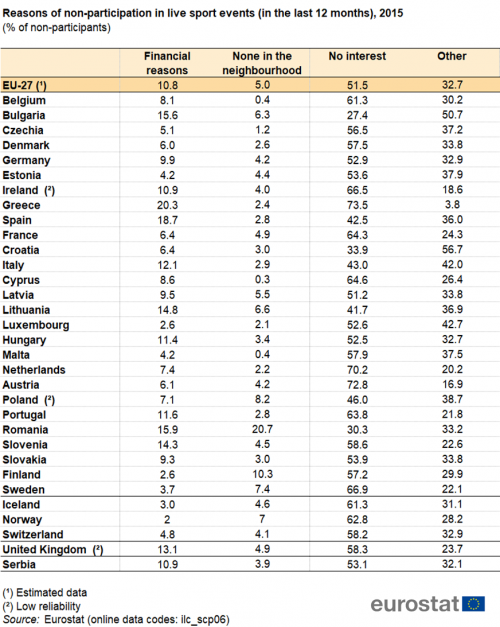 Eurostat’s sport statistics are derived from existing EU surveys, as to date there has been no specific data collection devoted only to sport at EU level.

Data on the practice of sport and physical activity (people’s active involvement in sport) come from wave 2 of the EHIS module on physical activity, which was run around 2014. The survey gathered data on work- and non-work related physical activity. For sport statistics purposes, only the latter was taken into account. The data presented in this article refer only to engaging in sport, fitness or recreational activities (e.g. Nordic walking, brisk walking, ball games, jogging, cycling, swimming, aerobics, rowing, badminton, etc.). The reference period is a typical seven-day week and the target population consists of people aged 15 and over.

Data on attending live sport events come from the EU-SILC 2015 ad hoc module on social and cultural participation. People’s attendance of live sports events was measured by frequency: at least once in the previous 12 months, one to three times, more than three times and never. People were also asked for their reasons for not participating. Data are presented as a proportion of the target population (aged 16 or over) or of non-participants (for reasons of non-participation).

EU-level cooperation and dialogue in sport has greatly improved since 2007, when the Commission adopted a White Paper on Sport — the first sport policy document published by the EU.

Sport became one of the EU’s supporting, coordinating and supplementing competences with the ratification of the Lisbon Treaty in late 2009. For the first time, the EU was actively aiming to promote sport and physical activity at policy level — not only with a view to improving health and physical well being across the EU, but also to enhance the role that sport can play in boosting social cohesion and for its educational value.

In early 2011, the Commission adopted a Communication on sport, focusing on the role of sport in society, its economic dimension and organisational issues. On the basis of that Communication, the Council adopted the first EU Work Plan for Sport, for 2011-2014, which strengthened EU level cooperation by setting priorities for the Member States and the Commission. This was followed by the second EU Work Plan for Sport (2014-2017) and more recently (with adoption in May 2017) the EU Work Plan for Sport (2017-2020), which establishes the integrity of sport, the economic dimension of sport and ‘sport and society’ as the three main priorities for the period.

In addition, in 2012 the Council adopted conclusions on promoting health-enhancing physical activity and strengthening the evidence base for sport policy making; it called on the Commission to issue regular surveys on sport and physical activity. The 2013 Council Recommendation on health-enhancing physical activity (HEPA) sought to encourage more effective policies and cooperation among all sectors that have a role to play in this field, i.e. sport and health, but also education, urban planning and the work environment.