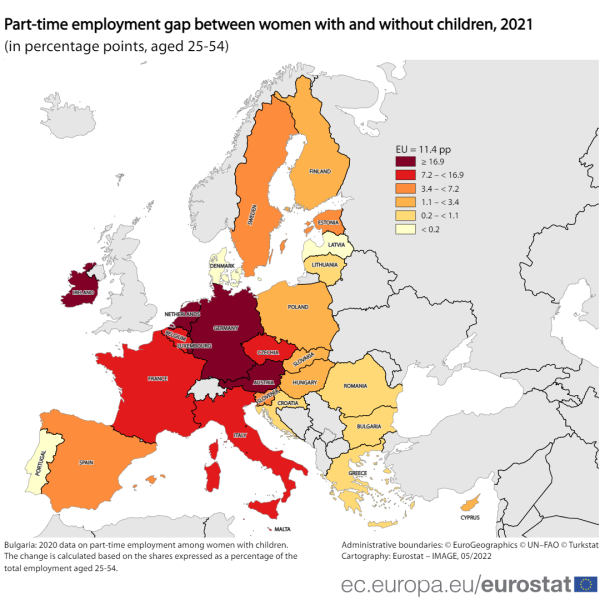 This article uses European Union Labour Force Survey (EU-LFS) data to give insight into the employment characteristics of households. It presents results for the EU as a whole, for all EU Member States individually, and for one candidate country (Serbia).

More statistics on this topic can be found in the Eurostat database under the households statistics section (see LFS series - specific topics). This article is complemented by three related articles Employment - annual statistics, Unemployment statistics and beyond and Household composition statistics. 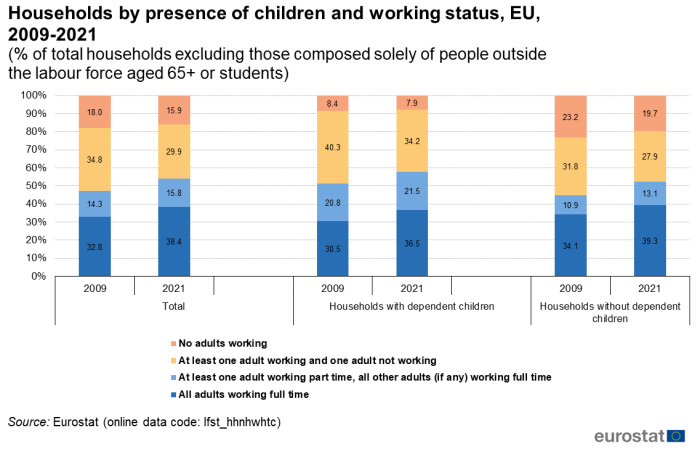 Figure 1: Households by presence of children and working status, EU, 2009-2021
(% of total households excluding those composed solely of people outside the labour force aged 65+ or students)
Source: Eurostat (lfst_hhnhwhtc)

These shares can be broken down as follows:

Figure 1 compares the situation in 2009 and 2021. This figure clearly shows that the share of households in which all adults work increased over the last 12 years (+7.0 percentage point (pp.)) regardless of the presence of children:

Focusing only on households in which all adults were working full-time, Lithuania ranked first with 55.2 % of its households, followed by Estonia (54.3 %) and Czechia (52.2 %).

Households in which at least one person was working part-time while the other adults were working full-time were more common in the Netherlands (39.3 %), Germany (28.3 %) and Austria (26.7 %). 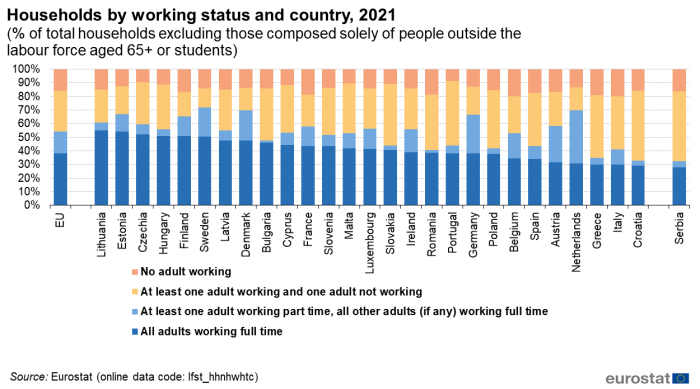 Figure 2: Households by working status and country, 2021
(% of total households excluding those composed solely of people outside the labour force aged 65+ or students)
Source: Eurostat (lfst_hhnhwhtc)

It is usually assumed that whether or not a person has children present in the household affects the way he or she participates in the labour market.

Figure 3: Employment rate by presence of children, sex and country, 2021
(in % of the total population aged 25-54)
Source: Eurostat (lfst_hheredty)

The lower the level of education, the more affected the employment rate

Looking at the level of education of people aged 25-54 is also highly relevant for the differences in terms of employment, sex and presence of children.

Figure 5: Employment rate by type of household, number and age of children and by educational attainment level, EU, 2021
(in % of the population aged 25 to 54)
Source: Eurostat (lfst_hheredty) and (lfst_hheredch)

Figure 6 presents the share of part-time employment in total employment for men and women aged 25-54. In 2021, almost one third of employed women aged 25-54 years with children worked on a part-time basis in the EU (32.3 %) against 20.9 % among employed women without children. For men, it is the opposite: 5.0 % of employed men with children worked part-time which was lower than the share of men without children (7.4 %). 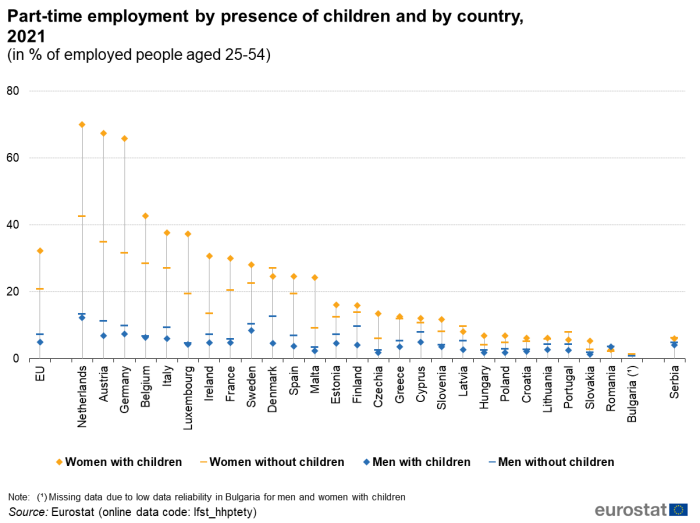 Figure 6: Part-time employment by presence of children and by country, 2021
(in % of employed people aged 25-54)
Source: Eurostat (lfst_hhptety)

Children and adults in jobless households 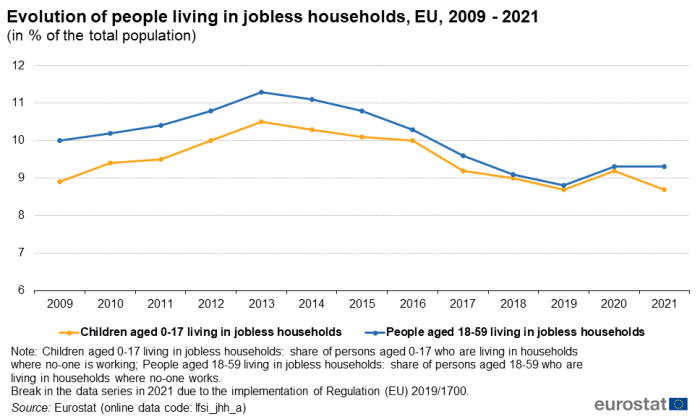 In Italy, Greece, Belgium, Spain, France and Romania more than 10 % of people aged 18-59 lived in households where no one was employed, while less than 5 % of people lived in such households in Hungary, Slovenia, Malta, Portugal and Czechia. 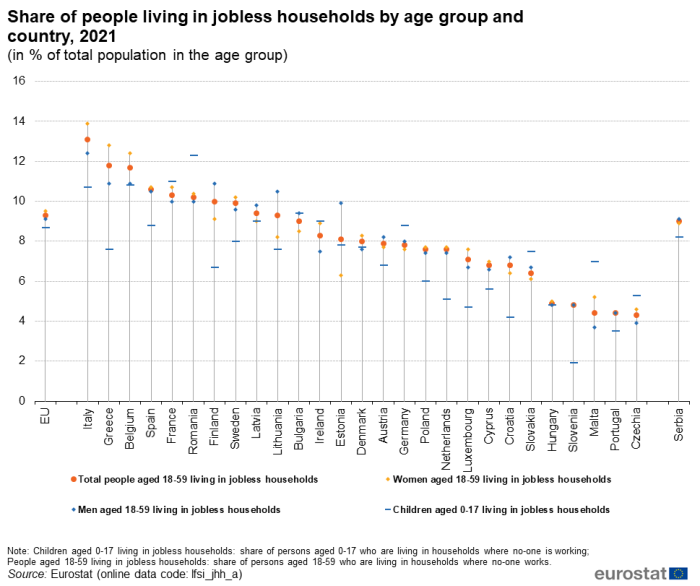 The concepts and definitions used in the EU-LFS follow the guidelines of the International Labour Organisation.

• A child is defined as a household member aged less than 18 years.

Employment statistics are at the heart of many EU policies. The European Pillar of Social Rights has been jointly signed by the European Parliament, the Council and the Commission on 17 November 2017. Employment and social policies are the main fields of interest of the European Pillar of Social Rights, which is about delivering new and more effective rights for citizens. It has 3 main categories: (1) Equal opportunities and access to the labour market, (2) Fair working conditions and (3) Social protection and inclusion. In particular, today's more flexible working arrangements provide new job opportunities especially for the young but can potentially give rise to new precariousness and inequalities. Building a fairer Europe and strengthening its social dimension is a key priority for the Commission. The European Pillar of Social Rights is accompanied by a ‘Social scoreboard’ which will monitor the implementation of the Pillar by tracking trends and performances across EU countries in 12 areas and will feed into the European Semester of economic policy coordination. The scoreboard will also serve to assess progress towards a social ‘triple A’ for the EU as a whole.