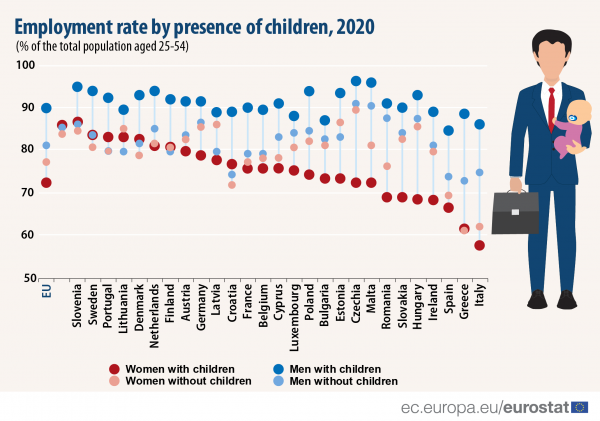 This article, using the European Union Labour Force Survey (EU-LFS) data, gives insight into characteristics of households with regard to employment. Results are presented for the EU as a whole, for all EU Member States individually, but also for four candidate countries (Montenegro, North Macedonia, Serbia and Turkey).

More statistics on this topic can be found in the Eurostat database under the section households statistics (see LFS series - specific topics). This article is nicely complemented by the articles Employment - annual statistics, Unemployment statistics and beyond and Household composition statistics.

Note: For comparison purpose, the households composed solely of students or solely of people outside the labour force aged 65 and over were excluded. 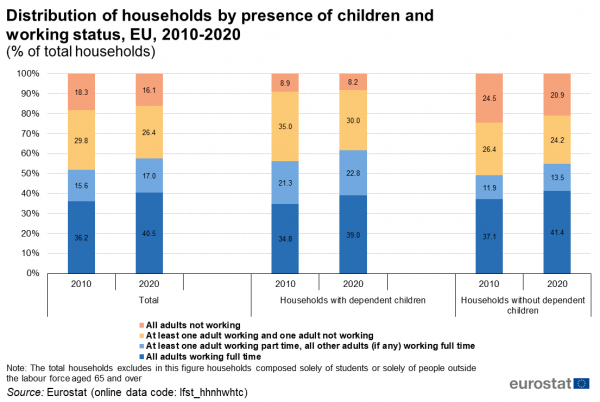 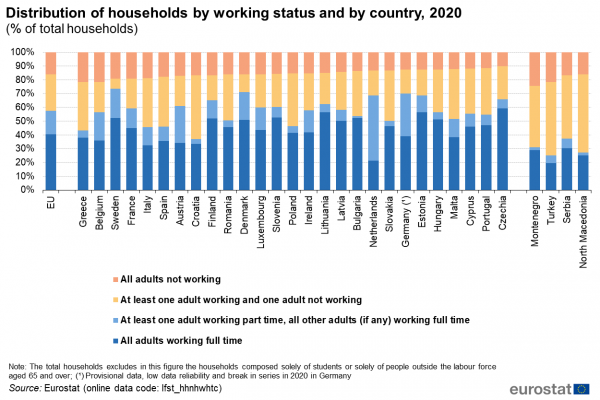 Figure 2: Distribution of households by working status and by country, 2020
(% of total households)
Source: Eurostat (lfst_hhnhwhtc)

Employment, education level and presence of children in the household: gender approach

It is largely assumed that whether or not a person has children present in the household affects the way he or she participates in the labour market. Furthermore, the number of children and the age of the youngest child would also play a role. This section aims at presenting the employment rates according to the different features of people aged 25-54: household composition, number of children and whether the youngest child is under 6 years. These employment rates are shown in Figure 3 for the total population and they are also broken down by education level.

Figure 3: Employment rate by type of household, number and age of children and by educational attainment level, EU, 2020
(in % of the population aged 25 to 54)
Source: Eurostat (lfst_hheredty) and (lfst_hheredch)

First of all, even if differences are visible according to the household's characteristics, the level of education appears to be determinant in the level of employment of each category and this applies especially for women.

The widest gaps between the share of employed women and men having children were found in Italy, Greece, Hungary, Czechia, Malta, Romania, Slovakia and Ireland. In all these countries, the differences between the employment rate of women and men with children exceeded 20.0 p.p., and ranked from 28.9 p.p. in Italy to 20.7 p.p. in Ireland. At EU level, the gender employment gap was 17.8 p.p. between both categories. By contrast, Portugal, Slovenia and Lithuania recorded differences lower than 10 p.p. It also appears that the employment rate of women with children seems to be higher in the countries showing the narrowest gender gaps. The results change drastically in absence of children. At EU level, the difference between the employment rate of men and women with no children was 4.1 p.p. in 2020 and was above 10 p.p. in only 3 countries (i.e. Italy, Greece and Romania).

Part-time employment for men and women, with and without children

Figure 4 shows the effect of having children on part-time employment for both the male and female population. Note that all results are limited to persons aged 25-54 years, so that different national situations for pupils, students and retired persons do not influence the results and do not compromise the comparability between countries.

In 2020, almost one third of women aged 25-54 years with children worked on a part-time basis in the EU (32.6 %). Figure 4 shows that the share of part-timers differs greatly between men and women and that the gender gap becomes even wider when persons have children. In all countries, the proportion of women with one or more children that are employed on a part-time basis is higher compared to men, with Montenegro being the only exception. The gap between men and women with children for the part-time employment rate was 27.5 p.p. in the EU in 2020. Concerning men and women without children, the gap was narrower and amounted to less than half of the gap observed for people with children (12.7 p.p.).

In Romania and Bulgaria, differences between men and women and between people with and without children, are rather small. In these two countries, the proportion of part-time workers is relatively low. In Denmark, Romania, Bulgaria, Lithuania and Greece, there are almost no differences (less than 1 p.p.) in the share of part-time employment between women with or without children. However, the most common pattern is that having children does influence the part-time employment among women. For example, in Germany 29.8 % of women without children worked part-time in 2020 against 66.9 % of women with children, in Austria these rates were 32.3 % against 64.4 %, and in the Netherlands 58.5 % against 81.7 %. This suggests that women in these countries tend to shift to part-time work from the moment they have children.

Figure 4: Gender gap in part-time employment by presence of children in the households and by country, 2020
(in % of employed people aged 25-54)
Source: Eurostat (lfst_hhptechi)

Children and adults in workless households 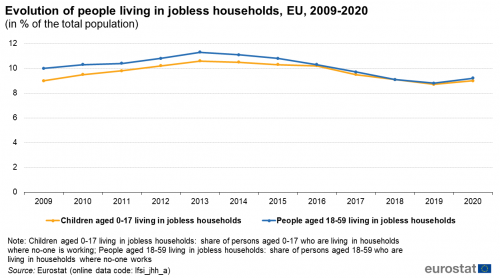 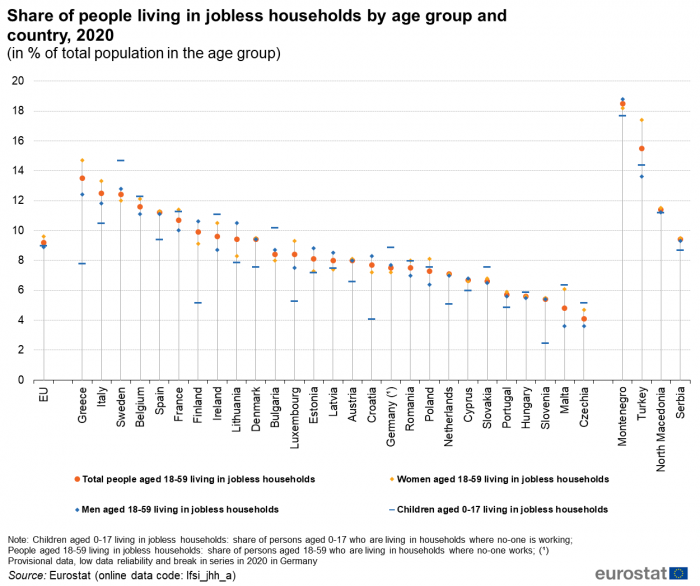 Figure 6: Share of people living in jobless households by age group and country, 2020
(in % of total population in the age group)
Source: Eurostat (lfsi_jhh_a)

Source: All statistics presented in this article are derived from the European Union Labour Force Survey (EU-LFS). The EU-LFS is the largest European household sample survey providing quarterly and annual results on labour participation of people aged 15 and over. It covers residents in private households and excludes those in collective households. Conscripts in military or community service are not included in the results. The EU-LFS is based on the same target populations and uses the same definitions in all countries, which means that the results are comparable between the countries.

Coverage: The results from the EU-LFS currently cover all European Union Member States, the EFTA countries Iceland, Norway, Switzerland, as well as the candidate countries Montenegro, North Macedonia, Serbia and Turkey. Nevertheless, EU-LFS household data are not available for Iceland, Norway, Switzerland. For Cyprus, the survey covers only the areas of Cyprus controlled by the Government of the Republic of Cyprus.

Country note: In Germany, since the first quarter of 2020, the Labour Force Survey (LFS) has been integrated into the newly designed German microcensus as a subsample. Unfortunately, for the LFS, technical issues and the COVID-19 crisis has had a large impact on the data collection processes, resulting in low response rates and a biased sample. Changes in the survey methodology also led to a break in the data series. The published German data are preliminary and may be revised in the future. For more information, see here.

Employment statistics are at the heart of many EU policies. The European employment strategy (EES) was launched at the Luxembourg jobs summit in November 1997 and was revamped in 2005 to align the EU’s employment strategy more closely to a set of revised Lisbon objectives. In July 2008, employment policy guidelines for the period 2008–2010 were updated. In March 2010, the European Commission launched the Europe 2020 strategy for smart, sustainable and inclusive growth; this was formally adopted by the European Council in June 2010.

The European Pillar of Social Rights has been jointly signed by the European Parliament, the Council and the Commission on 17 November 2017. Employment and social policies are the main fields of interest of the European Pillar of Social Rights, which is about delivering new and more effective rights for citizens. It has 3 main categories: (1) Equal opportunities and access to the labour market, (2) Fair working conditions and (3) Social protection and inclusion. In particular, today's more flexible working arrangements provide new job opportunities especially for the young but can potentially give rise to new precariousness and inequalities. Building a fairer Europe and strengthening its social dimension is a key priority for the Commission. The European Pillar of Social Rights is accompanied by a ‘Social scoreboard’ which will monitor the implementation of the Pillar by tracking trends and performances across EU countries in 12 areas and will feed into the European Semester of economic policy coordination. The scoreboard will also serve to assess progress towards a social ‘triple A’ for the EU as a whole.