Highlights
Tweet
In 2015, 6 % of people in the EU could not ask any relative, friend or neighbour for help and another 6 % had no one to discuss personal matters with.
Tweet
In 2015, over half of the EU population had not communicated using social media in the previous 12 months.
[[File:Social participation and integration statistics.xlsx]]

This article presents statistics on social participation in the European Union (EU) in 2015. They are based on data currently available in Eurostat from the EU SILC ad-hoc 2015 Module on Social and cultural participation and Material deprivation which contains, among others, variables measuring social engagement and participation of people aged 16 and over.

For this article, the dimensions on formal and informal volunteering, active citizenship, having contact with family and friends, having someone for help or to discuss personal matters and communication via social media (for detailed definitions, see the section on Data sources and availability) are used. Active participation in cultural and social life is closely linked with living conditions by households and individuals. This also relates to the concepts of cultural- and social capital which, in addition to economic capital, has significance for the quality of life.

In the 2015 EU-SILC ad-hoc module, two questions were asked about volunteering, i.e. whether people were involved in formal and/or informal voluntary activities during the past twelve months preceding the survey. 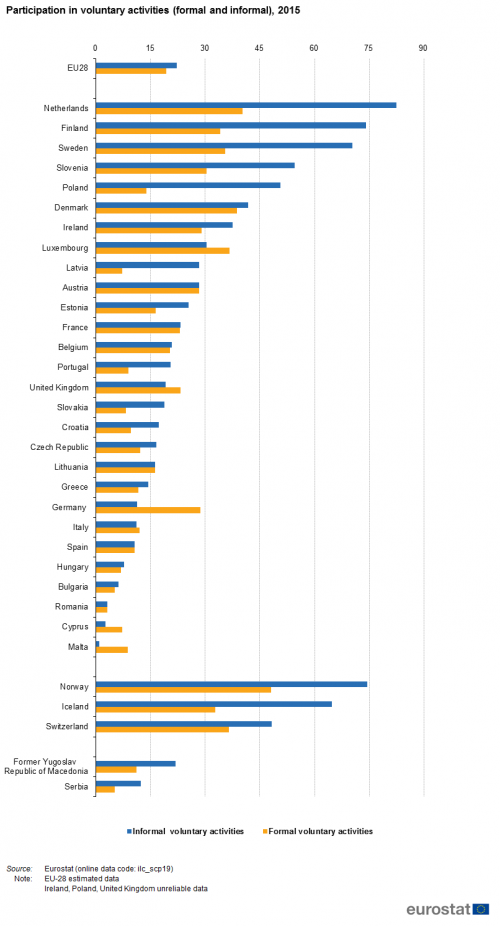 While these large differences between Member States may be attributed to different cultural or social structures (i.e. societies which favour more non-organised voluntary activities than others), it can be observed in all the participating European countries that educational attainment strongly influences the voluntary-participation patterns. At EU-28 level, in 2015, the participation rate for formal voluntary activities was 28.4 % for people with tertiary education (ISCED 2011 levels 5-8) and 11.5 % for people with less than primary, primary and lower secondary education (ISCED 2011 levels 0-2) (see Table 1). 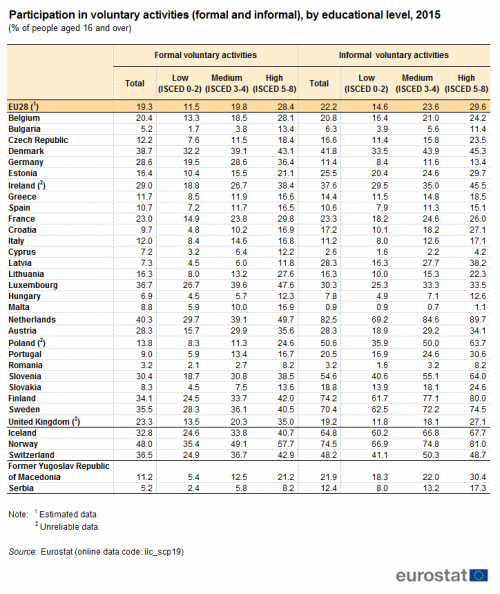 There are no significant differences between women and men or across the different age groups. At EU-28 level, the involvement of men was slightly higher in the case of formal voluntary activities, while women were more involved in informal voluntary work. The most active age group was 65 to 74 years olds who tended to participate the most in both types of voluntary activities (21.3 % for formal and 23.9 % for informal), followed by people young people aged 16-24 (20.6 % formal and 22.5 % informal) and people between the age of 25-64 years (19.5 % formal and 23.3 % informal), as shown in Table 2. 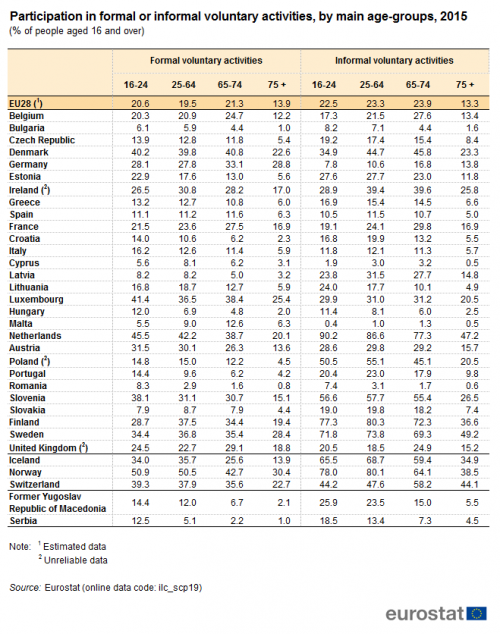 Table 2: Participation in formal or informal voluntary activities, by main age-groups, 2015 (% of people aged 16 and over)
Source: Eurostat (ilc_scp19)

Active citizenship in the 2015 ad-hoc module is understood as participation in activities related to political groups, associations or parties, including attending any of their meetings or signing a petition. In 2015, at EU-28 level, 12.8 % of all the people replied that they were active citizens according to the definition above. Among the EU-28, we find the highest rate in Sweden (31.3 %), followed by the Netherlands (25.3 %) and France (24.8 %). The least active citizens were observed in Cyprus (2.1 %), Slovakia (2.8 %) and Romania (3.6 %).

Persons with high educational attainment are more active citizens compared with the total population. In 2015, at EU-28 level, 22.6 % of all Europeans with tertiary education stated that they participated in activities related to active citizenship, while the corresponding rates for persons with medium education (upper secondary, ISCED 3-4) and low education (less than primary education, ISCED 0-2) were 12.1 % and 6.1 % respectively. The most striking difference in levels of participation between the highest and the lowest educated persons is to be seen in France (27.5 pp); the Netherlands (23.8 pp) and the United Kingdom (22.9 pp), see Table 3. 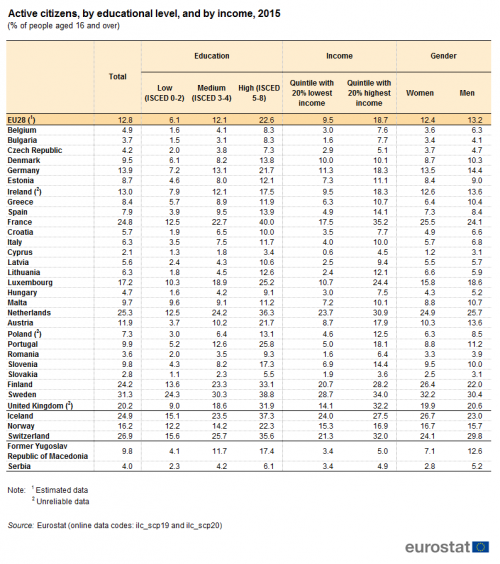 People with higher income tend be more active citizens compared with the total population. This is true regardless of the household types and/or the degree of urbanisation – it is the level of income that influences the variations across the countries. The participation rate at EU-28 level, for the persons in the highest income quintile was 18.7 %, while it was 9.5 % for the persons in the lowest income quintile, as shown in Table 3.

In 2015, 41.1 % of all Europeans stated that they were not interested in participating in active citizenship activities. The most frequent answer given for not volunteering was "other reasons[1]", (37.2 % for formal and 38.7 % for informal). For all three questions on informal/formal voluntary activities and active citizenship, at EU-28 level, people with low education answered more frequently that they are not interested in such activities, while people with tertiary education stated that they cannot participate due to lack of time or other reasons, as shown in Figure 2. 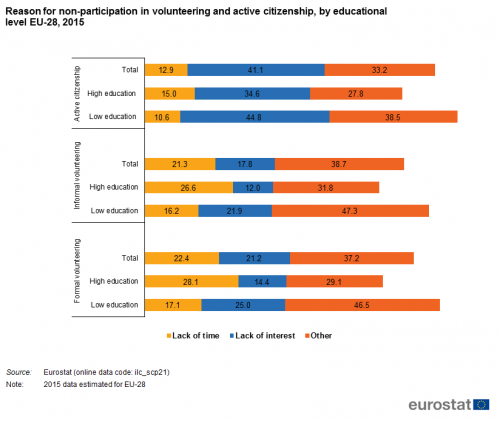 Having someone for help or to discuss personal matters

In 2015, 5.9 % of the EU-28 population could not ask any relative, friend or neighbour for help. In two Member States, the rates for people in the same situation were twice the EU average: Italy (13.2 %) and Luxembourg (12.9 %). Only 1.9 % of the population in both Czech Republic and Finland responded that they didn’t have anyone for help. In the majority of Member States the proportion of persons who have nobody to ask for help was well below the EU-28 average, as shown in Figure 3. 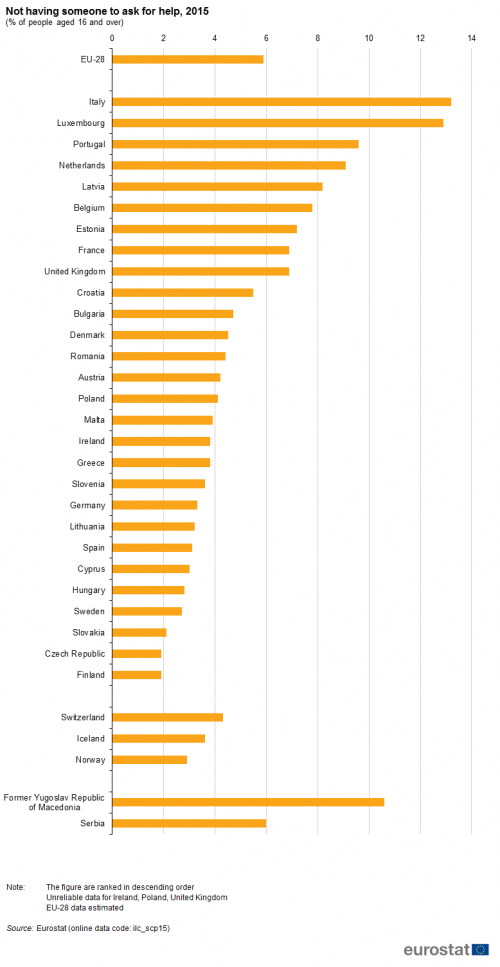 In all Member States, more people with low education had a limited possibility to ask a relative, friend or neighbour for help than the total population (see Table 4). 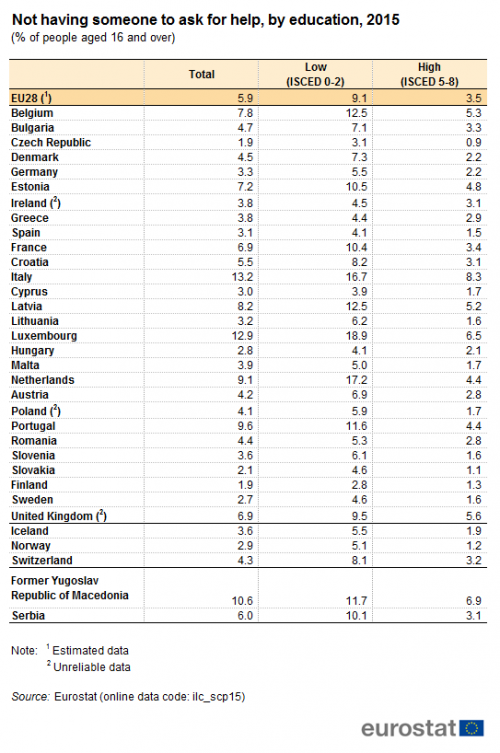 In 2015, 6.0 % of the EU-28 population didn’t have anyone to discuss personal matters with, as shown in Table 5. The majority of Member States were below the EU-28 average, with the exceptions of France and Italy, where 12.4 % and 11.9 % of persons respectively were in this situation. Looking at gender differences, more European men (6.7 %) than women (5.4 %) didn’t have anyone to discuss personal matters with. Among the Member States, we find the largest gender gap in France, followed by the Netherlands and Finland (6.6 percentage points (pp) for France, 3.7 pp for the Netherlands and 2.8 for Finland).

Income inequality seems to influence social isolation; more than twice as many Europeans with lower income stated that they didn’t have anyone to discuss personal matters with (see Figure 4). The largest differences between persons with low and high income were reported in both Belgium and Estonia (10.4 pp); the lowest were observed in Cyprus (2.0 pp) and Greece (2.4 pp). 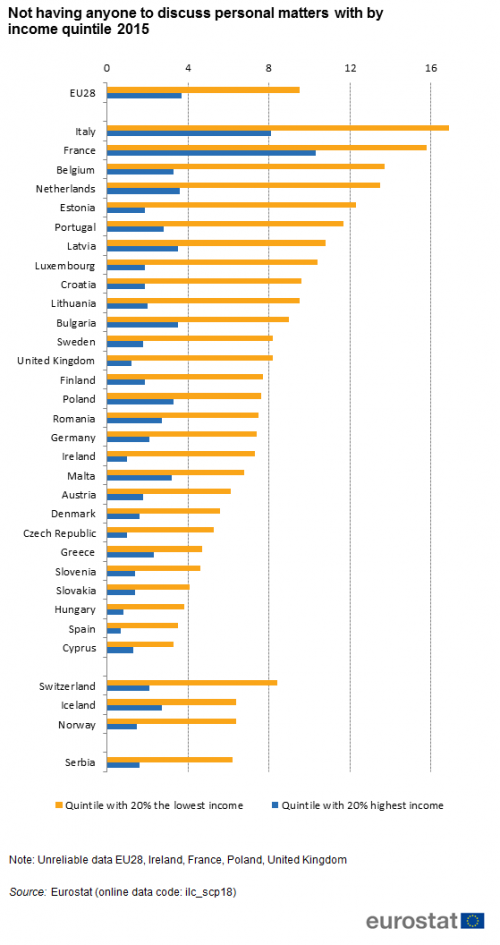 Figure 4: Not having anyone to discuss personal matters with, by income quintile, 2015 (% people aged 16+)
Source: Eurostat (ilc_scp18)

Integration with friends and relatives 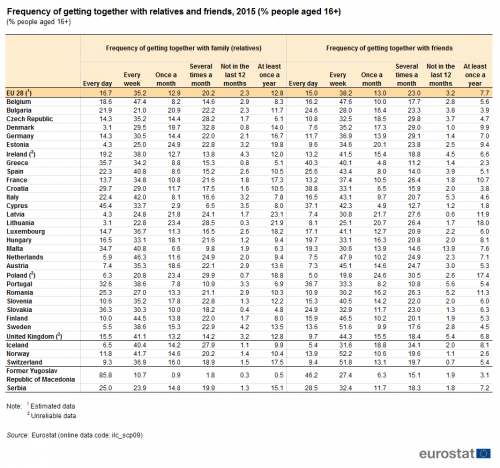 Table 6: Frequency of getting together with relatives and friends, 2015 (% people aged 16+)
Source: Eurostat (ilc_scp09)

The respondents were also asked about the frequency with which they participate in social networking sites, such as community-based web sites, online discussion forums, chat rooms and other social spaces online. In 2015, in the EU-28, more than half of the population (50.5 %) reported that they have not communicated via social media during the last 12 months. However, the second most common answer was the frequency ‘daily’ (26.2 %). The variation between the ‘never’ and ‘daily’ is explained by age: the majority of young people between 16 to 24 years old used social media on a daily basis (66.4 %); while not even one tenth (6.8 %) of the elder people between 65 to 74 years old did, as shown in Table 7. This pattern was repeated across all the reporting countries. 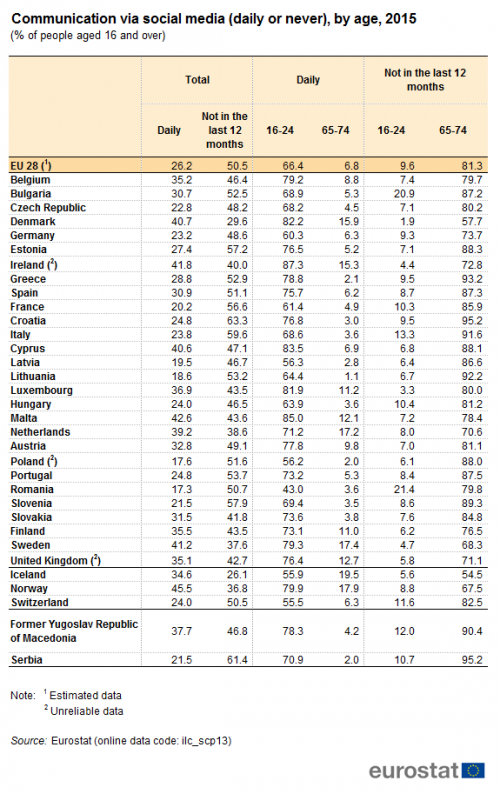 The ad-hoc module 2015 on 'Social and cultural participation' defines the items on social engagement and participation in the following way:

Formal volunteering refers to activities organised through an organisation, a formal group or a club. It also includes unpaid work for charitable or religious organisations.

Contact with friends or family asks about the frequency with which the respondent is usually in contact with family or friends during a normal year. Contact can be made by telephone, SMS, letter, fax, Internet (e-mail, Skype, Facebook, FaceTime or other social networks and other internet communication tools), etc. Only relatives or friends who don't live in the respondent’s household should be considered. It should be real contact, e.g. a letter or a conversation. Sharing or viewing photos is not a real contact and is excluded.

Communication via social media is defined as the frequency with which the respondent participates actively in social networking sites, such as community-based web sites, online discussion forums, chat rooms and other social spaces online. Active participation means not only joining social networks but also contributing actively to the discussion. Posting messages, photos, “likes”, etc. is also included. A social media should be understood as any website that enables users to create public profiles within that website and form relationships with other users (not necessarily friends or people really close to him/her) of the same website who access their profile. Examples of such social media can be: Facebook, My Space, LinkedIn, Twitter etc.

All the variables above are collected at personal level via personal interview with all current household members aged 16 and over or, if applicable, with each selected respondent. The age refers to the age at the end of the income reference period.

EU-SILC is the reference source for EU statistics on income and living conditions and, in particular, for indicators concerning social inclusion. In the context of the Europe 2020 strategy, the European Council adopted in June 2010 a headline target for social inclusion — namely, that by 2020 there should be at least 20 million fewer people in the EU at risk of poverty or social exclusion than there were in 2008. EU-SILC is the source used to monitor progress towards this headline target, which is measured through an indicator that combines the at-risk-of-poverty rate, the severe material deprivation rate, and the proportion of people living in households with very low work intensity — see the article on social inclusion statistics for more information.

Ad-hoc modules are developed each year in order to complement the variables permanently collected in EU-SILC with supplementary variables highlighting unexplored aspects of social inclusion.