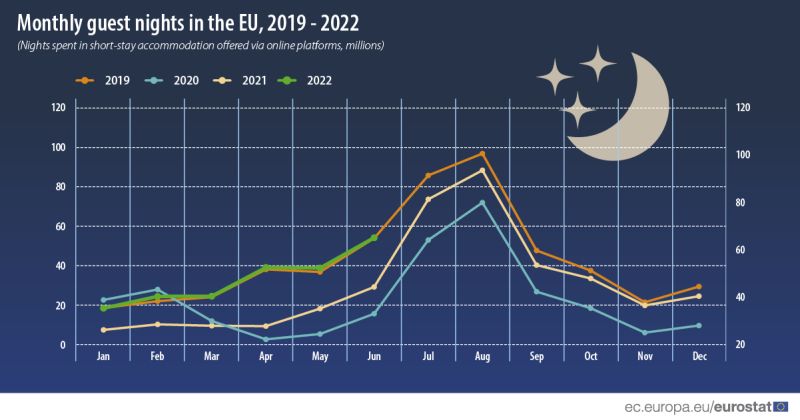 During the first half of 2022, nights spent in accommodation booked via online platforms have recovered significantly compared with 2020 and 2021. In total, 199 million nights have been spent in beds booked through one of the four online collaborative economy platforms which have a data sharing agreement with Eurostat (Airbnb, Booking.com, Tripadvisor and Expedia) between January and June 2022, an increase of 138 % compared with 2021. When compared with the first two quarters of 2019, the last year unaffected by the pandemic, the increase is still 3.2 %.

This article accompanies the more detailed articles covering the pre-pandemic years 2018 and 2019, and on the impact of the Covid-19 pandemic on reference years 2020 and 2021. It is updated four times per year, at the beginning of each quarter, and focusses on nights spent at country and regional level (NUTS 2).

Platform tourism exceeds 2019 levels in first half of 2022 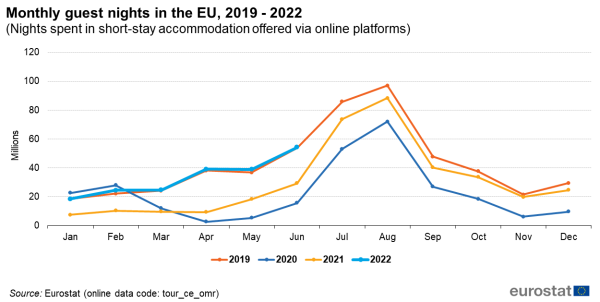 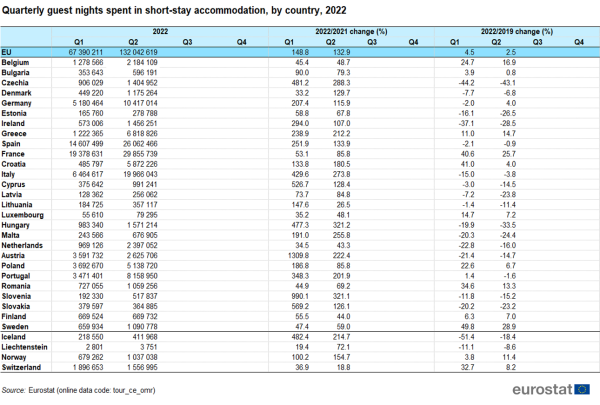 Looking at the nine EU Member States with more than 10 million guest nights in 2019, it becomes clear that platform tourism in the most popular destination countries recovered almost completely, with the potential exceptions of Italy and Austria, which are nevertheless within reach of their pre-pandemic levels. The development in France is particularly noteworthy: France was one of the few countries with a substantial increase already in 2021 and guest nights spent in France are now 31 % above 2019 levels. 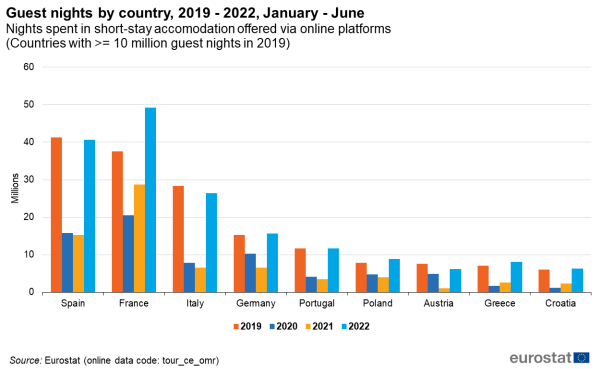 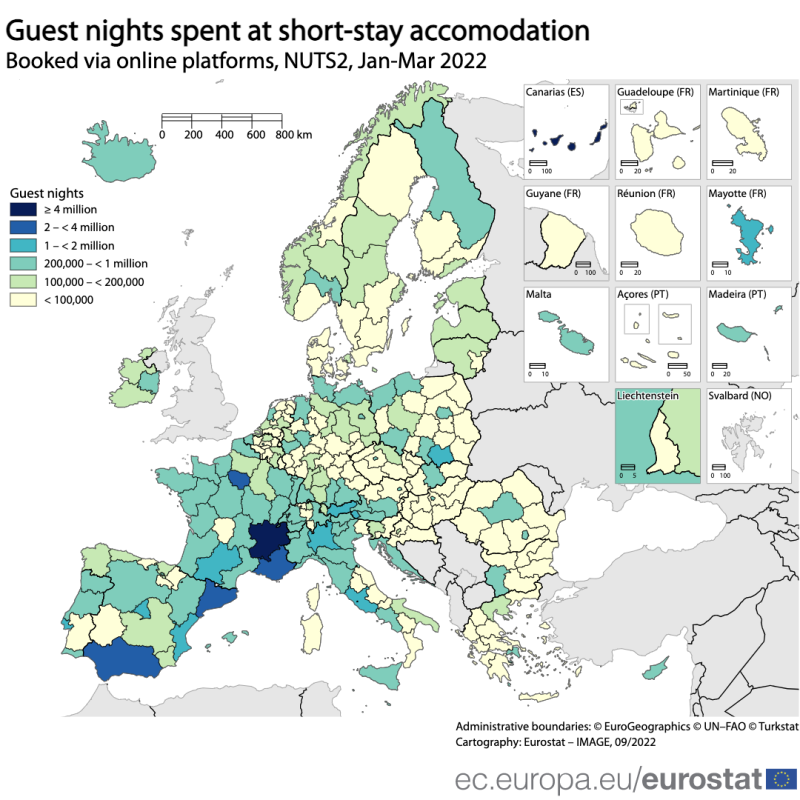 Note: Due to the nature of Eurostat’s agreement with the partner platforms, monthly regional data is released three months after the country level data. Therefore, while the content above refers to data up to and including June 2022, the regional data below only refers to January to March 2022.

Due to the high seasonality in tourism data and the fact that different countries and regions have different seasons of high demand (e.g. winter tourism in the Alps vs. summer tourism in the Mediterranean countries), the list of most popular regions in the first quarter of the year looks quite different than the list for the whole year. Out of the 15 regions with more than 1 million guest nights booked via online platforms in the first quarter of 2022, France and Spain had five regions each, two regions were in Italy and one each in Austria, Poland and Portugal. This list contains alpine regions such as Tirol in Austria and Rhône-Alpes in France, where in 2019, 42.2 % and 31.5 % respectively of nights spent in the region were spent there during the first quarter. In the EU as a whole, that same share was only 12.6 %. A second cluster of popular regions were sunny regions along the Mediterranean (Provence-Alpes- Côte d’Azur, Cataluña and Andalucia) and the Canary Islands.

Two regions (Rhône-Alpes in France and Canarias in Spain) had more than 4 million nights spent.

The article is based on data provided to Eurostat by four international platforms (Airbnb, Booking.com, Expedia Group, Tripadvisor), following agreements on data exchange concluded early 2020. The data covers short-stay accommodation in the EU and EFTA countries, offered by service providers via one of these four online collaborative economy platforms.

This article uses data that are published as experimental statistics. Such statistics use new data sources or methods to match user needs, but have not yet reached the maturity of fully-fledged official statistics. The project pioneers Eurostat’s use of privately held data via a direct cooperation with the industry, to produce reliable data covering the entire EU in a coherent way.

In March 2020, the Commission reached a landmark agreement with Airbnb, Booking.com, Expedia Group and Tripadvisor on data sharing. The agreement, signed between each platform and Eurostat on behalf of the European Commission, allows Eurostat to obtain key data from the four collaborative platforms and publish key statistics on short-term accommodation rentals concluded through these platforms on its website. In particular, platforms agreed to share, on a continuous basis, data on the number of nights booked and the number of guests. The privacy of citizens, including guests and hosts, is protected in line with applicable EU legislation and data will not allow individual citizens or property owners to be identified. The data provided by the platforms is then subject to statistical validation and aggregated and published by Eurostat.

The agreement has allowed, for the first time, access to reliable data about holiday and other short-stay accommodation offered via these collaborative economy platforms. It helps to close an information gap, since data on holiday homes, apartments and rooms in otherwise private buildings are often outside the scope of existing tourism registers.