Encouraging recovery of platforms tourism in the second half of 2021 – 364 million guest nights booked through collaborative economy platforms. 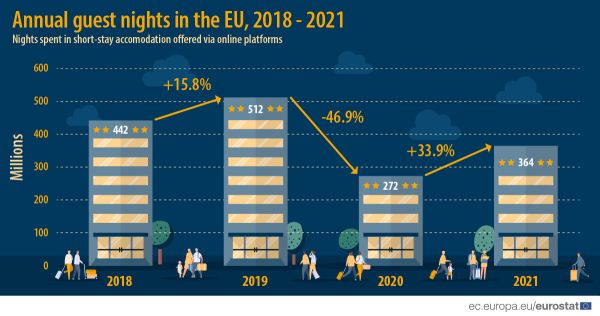 The Covid-19 pandemic has profound impacts on tourism in the EU. Travel and lodging restrictions limited the possibilities of spending a vacation abroad, and potential tourists were reluctant in order to limit their exposure to health risks. However, many countries lifted restrictions in 2021, which led to a gradual recovery of tourism activity over the course of the year. An agreement between the European Commission and four large online collaborative economy platforms (Airbnb, Booking, Expedia Group and Tripadvisor), signed in March 2020, allows Eurostat to compare guest nights spent in short-stay accommodation offered via online platforms from 2018 onwards. The expression “platform tourism”, used throughout this article, refers to short-term rentals, such as apartments, booked through these four platforms, excluding other forms of accommodation, such as hotels or campsites. This article focusses on the impacts of the pandemic on platform tourism, as well as on the recovery of the sector during 2021. It uses 2019, as the last year before the pandemic arrived in Europe, as a baseline for comparisons. It complements the article on the pre-pandemic covering 2018 and 2019.

In 2021, 364 million guest nights were spent in accommodation booked via one of the four platforms, compared to 272 million in 2020 and 512 million in 2019. This means that while there was a strong recovery of 34 % in 2021, platform tourism has not yet fully rebounded from the dramatic decrease of 47 % from 2019 to 2020 (see figure 1). The decrease coincided with the outbreak of the Covid-19 pandemic in March 2020, which led to strict travelling and lodging restrictions in most countries of the world and to a general reluctance to travel to limit exposure to health risks.

Encouraging recovery of platform tourism in the second half of 2021 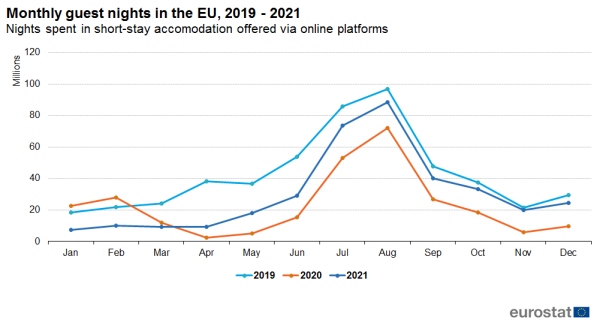 Note: The number of guest nights takes into account the number of nights spent during a stay and the number of tourists in the travel party. The concept is similar to the "nights spent at tourist accommodation establishments" generally used in official tourism statistics, and will be the focal volume indicator in this article.

Figure 2 shows that the arrival of the Covid-19 pandemic in Europe in March 2020 brought platform bookings close to zero in April and May. The number of nights spent stabilised in summer 2020 and followed the trajectory recorded in 2019 at a lower level. However, the arrival of the second wave of the pandemic in late 2020 affected platform tourism in winter 2020 and during the first half of 2021. Starting in July 2021, eased restrictions led to a strong recovery, with values very close to pre-pandemic records from 2019.

While guest numbers slightly increased in January and February 2020 compared to 2019, the arrival of the Covid-19 pandemic in Europe during March 2020 brought bookings close to zero in April and May (-93.2 % in April and –85.6 % in May, compared to April and May 2019; see figure 2). After many countries eased travelling restrictions in the summer, the number of nights spent recovered and followed the trajectory recorded in previous years, whilst still being much lower (-38.3 % in July and – 25.8 % in August). However, the arrival of the second wave of the pandemic in autumn/winter 2020 led to another severe impact on booking numbers towards the end of the year (-71.8 % in November) and in early 2021 (59.7 % fewer nights spent in January 2021 than in January 2019).

In summer 2021, travelling restrictions were eased again, or even lifted completely, in most countries. Following that, the number of nights spent in short-stay accommodation recovered significantly and was very close to pre-pandemic levels. In July and August, the two most popular months, 73.7 and 88.4 million nights were spent in short-stay accommodation; these values are 85.9 % and 91.2 % of the record values for these months recorded in 2019. Although another Covid-19 wave arrived in late 2021, most countries refrained from imposing similarly limiting restrictions as in 2020; accordingly, bookings remained high and were close to pre-pandemic levels until the end of the year.

In a nutshell, this means that the growth of around 90 million guest nights from 2020 to 2021 can completely be attributed to the second half of the year. 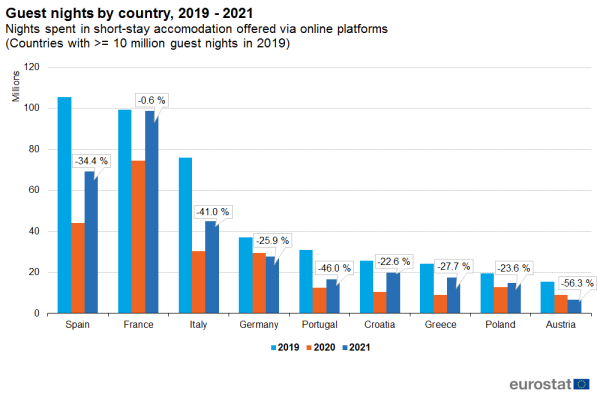 Figure 3 shows that in 2020, platform tourism was impacted unevenly across Europe, with countries such as Spain (-58.1 %) and Italy (-60.2 %) affected more severely than France (-25.0 %) or Germany (-20.6 %). Eight countries (Czechia, Greece, Italy, Cyprus, Hungary, Malta, Slovenia and Iceland) registered falls of more than 60 %, with Iceland exhibiting the largest relative decrease (-74.9 % from 2.7 million nights in 2019 to 549.000 in 2020). While the number of guest nights decreased in all 31 countries observed, Switzerland, Germany, France and Sweden were least affected, with relative decreases below 30 %. When looking at the nine countries with more than 10 million guest nights in 2019 (Figure 3), it becomes clear that traditional summer destinations around the Mediterranean Sea were impacted much harder than the European average.

The recovery in 2021 was similarly uneven, with several countries almost reaching their 2019 record values again. While the EU as a whole was still 28.9 % below 2019, guest nights in France were just 0.6 % below 2019, meaning it is the country with the most guest nights spent for the second year in a row, taking the lead from Spain. Switzerland and Sweden have almost completely recovered as well. Looking at the traditional summer destinations, which were impacted particularly hard in 2020, the picture is uneven as well: Greece and Spain show a recovery speed similar to the EU average, meaning they are now around 30 % away from their 2019 values, while Croatia was even faster (22.6 %). On the other hand, Italy (41 %) and Portugal (46 %) are still struggling. In five countries (Czechia, Germany, Latvia, Austria and Slovakia), the number of guest nights spent has decreased further in 2021. In the case of Germany, this comes after a relatively modest decrease in 2020, which could point to the fact that travelers that spent their vacation within the country in 2020 decided to go elsewhere in 2021. In Austria, the decrease can be attributed to relatively severe restrictions in winter 2020/21; while in January and February 2020, Covid-19 had not yet arrived in Europe. 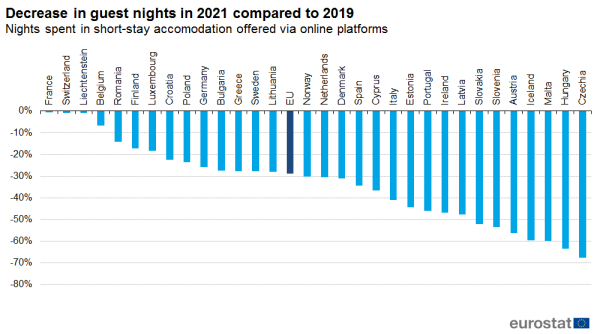 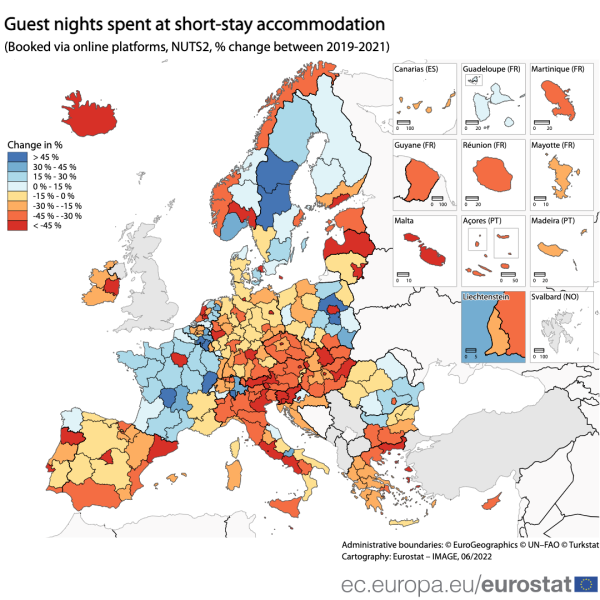 Figure 5: Map of the change in guest nights by NUTS2, 2021 compared with 2019
Source: Eurostat (Experimental statistics)

The 27 Member States of the EU are divided into 334 statistical regions (NUTS 2 level). When analysing the recovery of platform tourism at regional level, it becomes clear that not all regions have rebounded equally, see figure 5. Coastal regions along the Mediterranean Sea, capital city regions, as well as alpine winter destinations were the furthest away from their 2019 levels. Mediterranean destinations were impacted particularly hard in 2020, as many travellers from countries such as Germany or France chose to spend their vacations within their home countries. Winter tourism suffered due to severe restrictions during winter 2020/21. The regions with at least 1 million guest nights in 2019 that were the furthest away from their 2019 values, were Praha (-81.9 %), ‘Eastern and Midland’ in Ireland (-76.2 %), Budapest (-72.9 %), Wien (-66.3 %) and Lazio in Italy (-64.8 %), all of them capital city regions. In addition, the coastal region of Cataluña in Spain, the third most popular region in 2019 with over 20 million guest nights remains far behind the number of nights booked in 2019 (-48.5 % to 10.7 million). 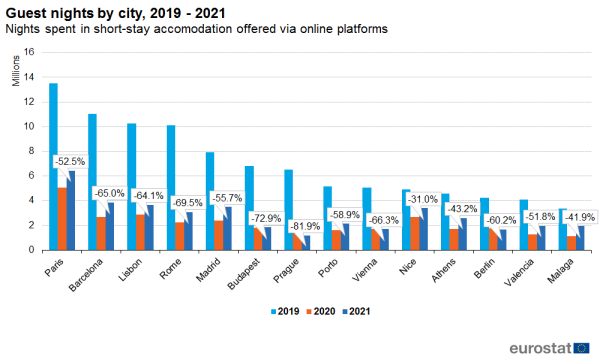 In 2019, domestic tourism (referring to nights spent by tourists within their country of residence) was responsible for around one third of the total nights spent. Tourists from EU countries other than the host country accounted for around 37 % of guest nights, those from other European countries for around 15 %, while 14 % of travelers came from outside of Europe. In 2020, as international travel became subject to increasingly severe restrictions, the share of domestic tourists increased to almost 60 %. Travel within the EU still had a significant share (around 28 %), while travel from outside the EU decreased drastically (9 % other Europe; 5 % for the rest of the world).

In 2021, while total nights spent recovered significantly, influx of travelers from outside of Europe stayed low (17 million guest nights, compared to 73 million in 2019). Consequently, the share of domestic tourists remained at a very high level (55.9 %) and the relative importance of tourists from other world regions stayed minimal compared to the pre-pandemic situation. 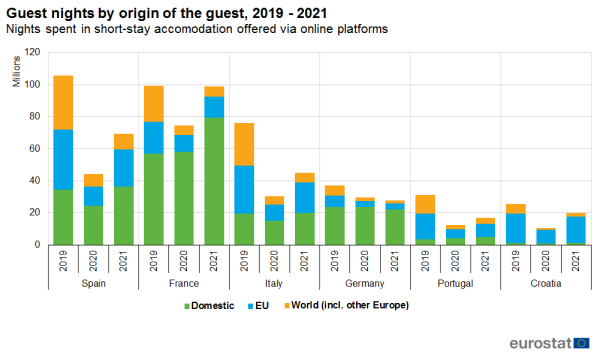 This drastic decrease of international tourism largely explains how differently the Covid-19 pandemic affected platform tourism in the observed countries. Looking at the breakdown of guest nights by origin of the guests for the six most popular countries in 2019, it becomes clear that the share of domestic tourism had a huge impact on the observed decrease in platform tourism in 2020. While the volume of domestic tourism only decreased moderately in all six countries (in France and Germany, it even increased), travel from other regions fell sharply across the board. This lead to the huge overall drops in countries such as Spain, Italy or Croatia, since these countries had a much higher share of international tourism in 2019.

Recovery in 2021 in these countries can mostly be attributed to an increase in domestic tourism (especially in Spain, France and Italy) and intra-EU tourism (Spain, Italy and Croatia).

The article is based on data provided to Eurostat by four international platforms (Airbnb, Booking, Expedia Group, Tripadvisor), following agreements on data exchange concluded early 2020. The data covers short-stay accommodation in the EU and EFTA countries, offered by service providers via one of these four online collaborative economy platforms.

This article uses data that are published as experimental statistics. Such statistics use new data sources or methods to match user needs, but have not yet reached the maturity of fully-fledged official statistics. The project pioneers Eurostat’s use of privately held data via a direct cooperation with the industry, to produce reliable data covering the entire EU in a coherent way.

In March 2020, the Commission reached a landmark agreement with Airbnb, Booking, Expedia Group and Tripadvisor on data sharing. The agreement, signed between each platform and Eurostat on behalf of the European Commission, allows Eurostat to obtain key data from the four collaborative platforms and publish key statistics on short-term accommodation rentals concluded through these platforms on its website. In particular, platforms agreed to share, on a continuous basis, data on the number of nights booked and the number of guests. The privacy of citizens, including guests and hosts, is protected in line with applicable EU legislation and data will not allow individual citizens or property owners to be identified. The data provided by the platforms is then subject to statistical validation and aggregated and published by Eurostat.

The agreement has allowed, for the first time, access to reliable data about holiday and other short-stay accommodation offered via these collaborative economy platforms. It helps to close an information gap, since data on holiday homes, apartments and rooms in otherwise private buildings are often outside the scope of existing tourism registers.