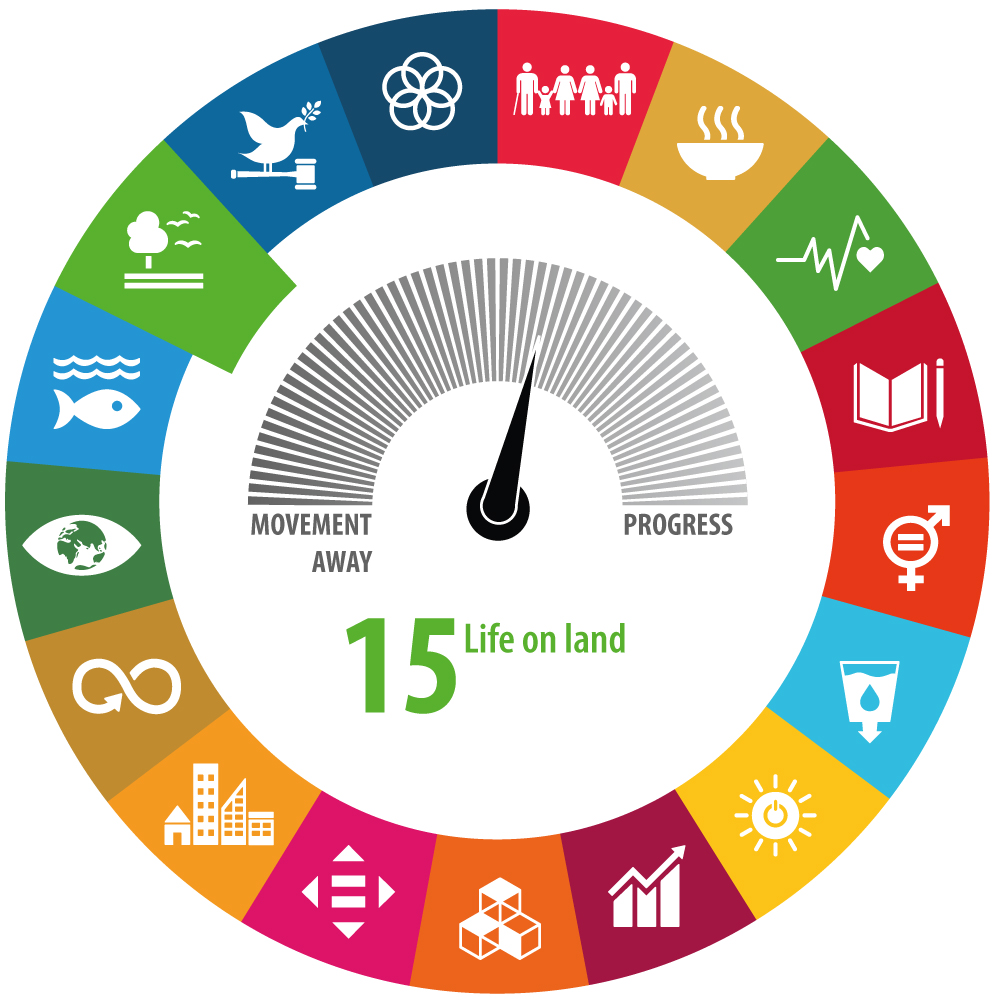 EU trend of SDG 15 on life on land

This article provides an overview of statistical data on SDG 15 ‘Life on land’ in the European Union (EU). It is based on the set of EU SDG indicators for monitoring of progress towards the UN Sustainable Development Goals (SDGs) in an EU context.

This article is a part of a set of statistical articles, which are based on the Eurostat publication ’Sustainable development in the European Union — Monitoring report on progress towards the SDGS in an EU context — 2020 edition’. This report is the fourth edition of Eurostat’s series of monitoring reports on sustainable development, which provide a quantitative assessment of progress of the EU towards the SDGs in an EU context.

Life on land in the EU: overview and key trends

Humans greatly benefit from many ecosystem services, such as clean air, purified water and food provision. In addition, terrestrial ecosystems offer natural resources used in industrial processes, as well as cultural services such as outdoor recreation. Other services provided by ecosystems include protection from natural disasters such as flooding and the mitigation of the negative effects of climate change. Human activities that degrade ecosystems, including pollution and overuse of resources, threaten animal and plant species and as a result the provisioning of ecosystem services and their benefits to human well-being [2]. Hence, EU legislation such as the Birds and Habitats Directives and policies such as the EU Biodiversity Strategy and the EU Forest Strategy help to ensure a healthy ecosystem status. They also aim to ensure that terrestrial ecosystems and the services they provide are sustainably used and managed. ‘Ecosystem status’ can be assessed by comparing the state of a habitat or ecosystem against legal targets and EU and international policy goals, such as the international Aichi biodiversity targets.

Overall, the indicators on ecosystem status in Europe only provide an indication of the health of forest ecosystems, while other ecosystems (for example, wetlands, grassland, cropland, rivers and lakes) and pressures on ecosystems (such as other nitrate and phosphorous pollution, habitat fragmentation, noise and light pollution, water stress and invasive species) are not monitored. It is important to recognise this limitation in presenting a full and complete picture of Europe’s terrestrial ecosystems, the status of which cannot be fully addressed with the currently available long-term datasets.

Organic and phospate pollution in European rivers has decreased since 2000

The ecological status of European water bodies gives an important indication of how Europe’s natural environment is faring in the face of pressures from human use. Two indicators monitor progress in this area: biochemical oxygen demand in rivers and phosphate in rivers. These indicators paint a rather favourable picture of the EU’s progress over the past 17 years in making rivers cleaner.

Phosphate (PO4) in rivers can originate from agricultural production, urban waste water and industrial discharges [4]. Heavy loads of phosphate in rivers can harm the environment by causing biodiversity loss and water eutrophication. On average European phosphate concentrations have fallen by 42.2 % since 2000, reaching levels of 0.093 mg/L in 2017. Overall, reductions in phosphate concentrations can be linked to the introduction of measures by national and European legislation, such as the Urban Waste Water Treatment Directive [5], and the switch to phosphate-free detergents [6].

Land degradation is linked to the long-term biological productivity of land. It is a complex phenomenon that brings together several elements, including soil degradation and the capacity of land areas to support water resources, biodiversity and primary productivity [9]. Soil degradation by itself covers many aspects such as soil sealing and contamination, erosion by wind and water, loss of soil biodiversity, compaction, decline in organic matter, desertification, acidification and salination [10]. Not all of these threats to soil quality can be covered in this indicator set, limiting the analysis to imperviousness change and soil erosion by water.

Land take has increased in the EU, but at a slowing rate

The increase of sealed land can approximate landuse change for human use or intensification [11]. Across the EU, sealed soil has increased since 2006 in all Member States. In total, between 2006 and 2015, the EU area covered with impervious materials grew by 2 989 square kilometres (km²) or 4.5 %. This means that on average, an area of 332 km² — more than the size of Malta — is converted to impervious surfaces each year in the EU. However, the pace of soil sealing between reporting periods appears to have slowed.

Land take is described as the process of transforming agricultural, forest and other semi-natural and natural areas into artificial areas. Land take is monitored using the Copernicus CORINE land cover datasets [12], which have been published every six years between 2000 and 2018. In the EU-28, net land take has amounted to 12.779 km2 over the whole time span. Even though the rate of land take has decreased by more than 40 % over the three observation periods, indicating positive developments, recultivation and renaturalisation of land was still far less than the land taken, indicating a distance from the ‘no net land take’ policy target for 2050 [13].

In all three observation periods, agricultural areas were the most likely to be converted to artificial surfaces, reducing the amount of land available for food and feed production  [14]. This results in increased fragmentation and loss of natural habitats. Furthermore, the artificial areas create plots that are isolated from functional ecosystems and can lead to increased flood risk and more frequent rapid surface run off [15]. Moreover, sealed lands cannot store carbon and thereby contribute to greenhouse gas emissions and climate change. 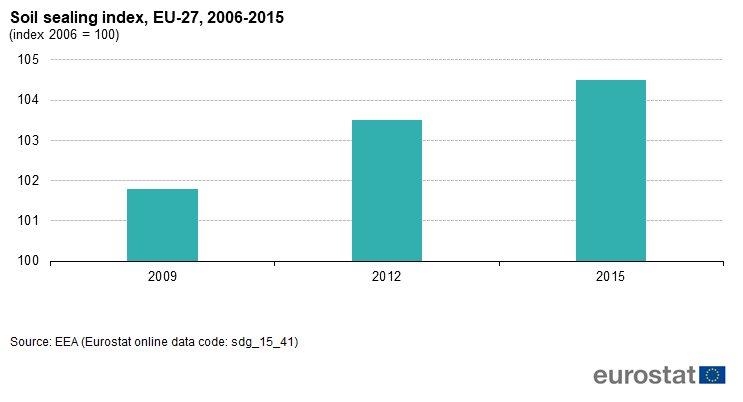 Soil is a resource that provides multiple benefits to society, including the provision of raw materials, food production, storage, filtration and the transformation of many substances, including water, carbon and nitrogen [16]. Retaining soil health ensures the continued provision of such benefits. Soil erosion by water is one of the major threats to soils in the EU and contributes to land degradation. Removing fertile topsoil reduces soil productivity and threatens crop production, the quality of drinking water, habitats and biodiversity, and carbon stocks [17].

Even though there were signs of improvement in the EU during the period 2000 to 2010, the positive trend seems to have slowed since 2010. Efforts to address and mitigate soil erosion by water helped to reduce the estimated land area at risk of severe soil erosion (soil loss of over 10t/ha/yr) by water from 198 607 km² in 2010 to 196 853 km² in 2016 or by 0.9 % in the EU. Improvements due to the implementation of agro-environmental standards required under the Common Agricultural Policy (CAP) may have helped to reduce the mean rate of soil loss by water erosion. Overall, soil conservation and management measures have reduced the estimated soil loss in the EU by more than 9 % since 2003. Farming practice such as reduced tillage, preserving a minimum soil cover, reduction in the area of bare soils, contour farming along slopes, maintenance of terraces and stone walls, and extended use of grass margins have helped to reduce soil erosion [18]. However, more than half of the EU’s agricultural area remains at risk of being eroded at a rate that is faster than soils can be replaced naturally (more than 1 t/ha/yr) [19]. Severe soil erosion (more than 10 t/ha/yr) is estimated to affect more than 5 % of land area and contribute to 52 % of total soil loss in Europe [20]. 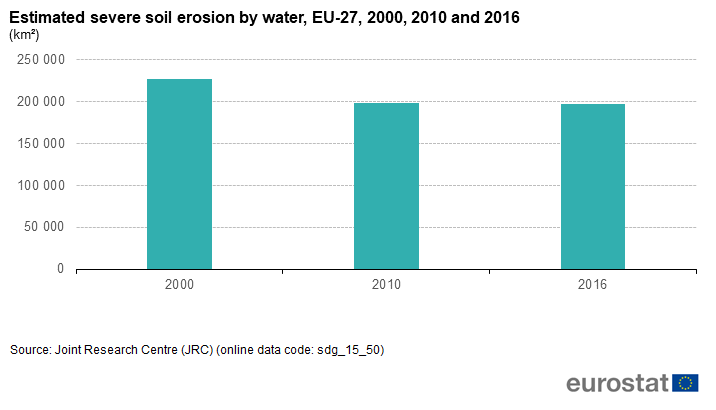 Terrestrial ecosystems have been protected under the Birds Directive since 1979 and the EU Habitats Directive since 1992. Both Directives form the main pillar for the protection of Europe’s biodiversity and ecosystems. Under these Directives, Member States are required to designate and manage Special Protection Areas (SPAs; Birds Directive) and Sites of Community Importance (SCIs; Habitats Directive) and, if necessary, restore them to favourable conservation status. These sites, which are collectively known as the Natura 2000 network, significantly contribute to the protected area network of EU Member States. The Natura 2000 network is complemented by nationally designated terrestrial protected areas that are established under each Member State’s national framework.

Despite being protected, many terrestrial habitats and species have not reached ‘favourable conservation status’ under the Habitats Directive

Assessments of the conservation status of species of European interest [21] and habitats of European interest [22] reveal that many species and habitats have not met favourable condition standards as set out within the Habitats Directive. Across the EU [23], only 23 % of species assessments and 16 % of habitats assessments were considered ‘favourable’ in 2012, with the majority considered unfavourable (60 % for species and 47 % for habitats), unfavourable to bad, or declining (18 % for species and 30 % for habitats). Fish, molluscs and amphibians have a particularly high proportion of species that show a deteriorating trend in conservation status. Habitats showing a declining trend include bogs, mires and fens, followed by grasslands [24]. 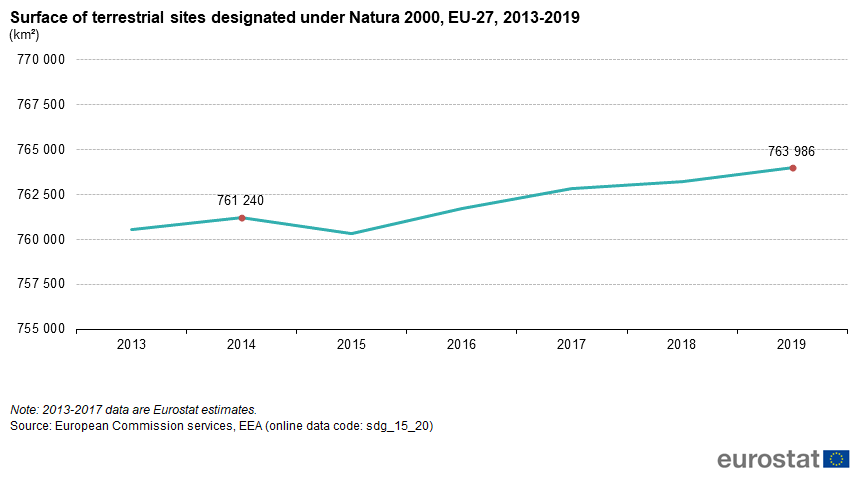 Changes in land use and the overuse of ecosystems can harm biodiversity. As biodiversity supports all ecosystem functions and contributes to their capacity to provide ecosystem services [25], monitoring is vital to preserving and restoring biodiversity. Birds are sensitive to both human-induced and natural environmental change, making them good indicators of wider ecosystem health. Their widespread and diverse habitats also make them ideal for monitoring the results of conservation efforts [26].

The EU common bird index tracks population abundance and diversity of a selection of common bird species in the EU, typified by common forest and farmland bird species. The index shows there has been a 6.4 % decline in common bird species and a dramatic 28.3 % fall in farmland bird species between 1990 and 2018. Forest bird species, on the other hand, appear to be recovering from losses in the early 2000s, with their index gaining 3.8 % over the whole period from 1990 to 2018. The decline in common farmland birds has largely been attributed to agricultural intensification, which has reduced natural nesting habitats such as hedges, wetlands, meadows and fallow fields. Agro-chemicals and changes in ploughing times for cereals have also affected common farmland birds, disrupting their breeding and decreasing available food sources [27]. The situation is not improving for common farmland birds, despite losses slowing in recent years with a decline of 1.8 % between 2013 and 2018. Common forest birds have shown a positive trend, increasing by 6.1 % during the same period. Overall, the decline in common birds appears to come to a halt, showing a 2.4 % reduction since 2003 but a 0.5 % gain since 2013.

Butterflies — which are among the most common plant pollinators — can also act as signals of environmental and habitat health. The grassland butterfly index is based on data from 15 Member States, measuring the population trends of 17 butterfly species within the national Butterfly Monitoring Schemes [28]. According to estimates from these monitoring efforts, butterfly populations declined by 39.3 % between 1990 and 2017, signifying a dramatic loss of grassland biodiversity. Much of this decrease has occurred over the past 15 years, with the index falling by 23.2 % between 2002 and 2017. However, over the short-term between 2012 and 2017, the grassland butterfly index grew by 2.7 %. Causes for this decline can be attributed to changes in rural land use, in particular stemming from agricultural intensification and land abandonment in mountains and wet regions, mainly in eastern and southern Europe. The loss of semi-natural grasslands has been particularly detrimental [29]. 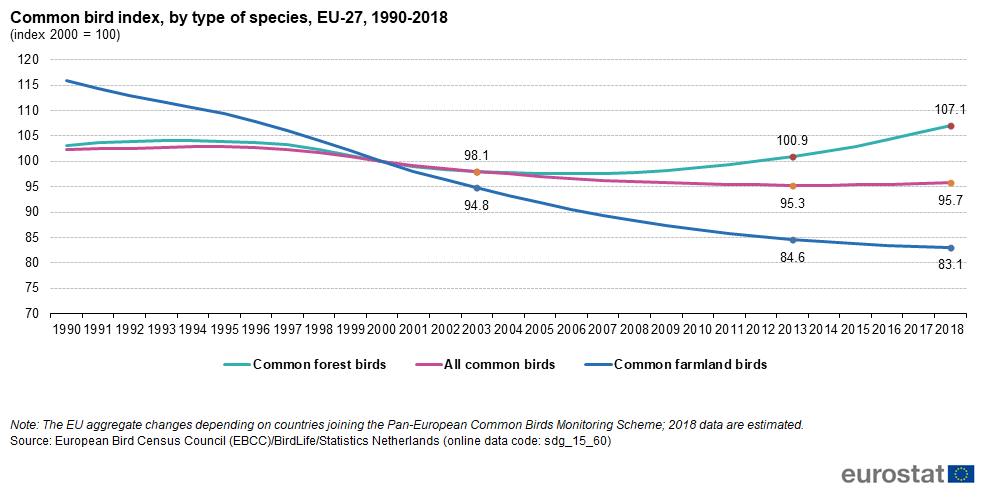 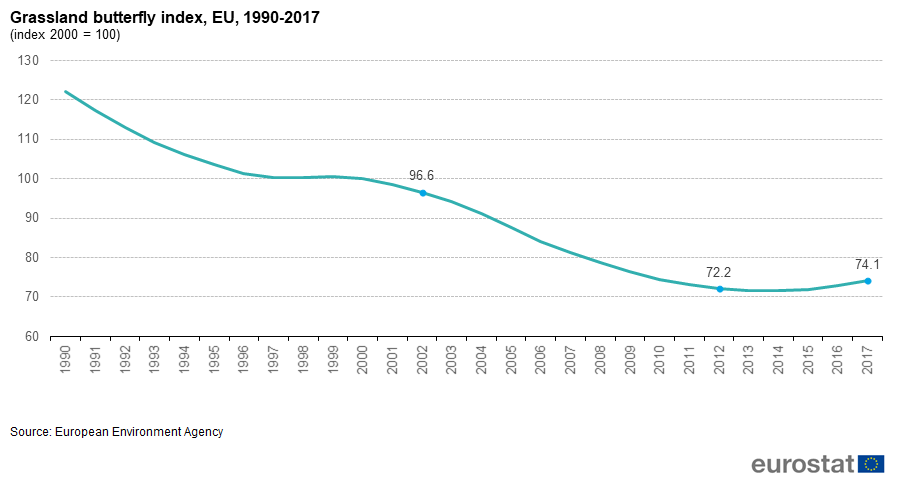 Along with SDG 14, SDG 15 is one of the key goals at international level that incorporates environmental considerations for UN member countries. In the EU this goal ensures that the health and functioning of ecosystems and the delivery of ecosystem services remain a priority, especially in the face of global trends such as population growth, accelerating urbanisation and the increasing need for natural resources. Ecosystem services provided by terrestrial ecosystems offer many benefits to society, including recreation, natural resources, food, clean air and water, as well as protection from natural disasters and mitigation of climate change. However, human activities that damage ecosystems and increase land degradation threaten the provision of these services and diminish biodiversity. Thus, the EU endeavours to ensure ecosystems are healthy and sustainably used and managed.

More detailed information on EU SDG indicators for monitoring of progress towards the UN Sustainable Development Goals (SDGs), such as indicator relevance, definitions, methodological notes, background and potential linkages, can be found in the introduction of the publication ’Sustainable development in the European Union — Monitoring report on progress towards the SDGS in an EU context — 2020 edition’.

Further reading on life on land