The number of road accident fatalities per million inhabitants was 50.5 in the EU in 2016. Sweden and the United Kingdom recorded the lowest rate (both 27), Bulgaria (99) and Romania (97) the highest rate.

The total number of fatalities in road traffic accidents in EU decreased by 53% between 2001 and 2016.

This article takes a look at medium-term trends in the number of lives lost in road traffic accidents in the European Union (EU), down to the regional level for the latest year available.

The total number of fatalities in road traffic accidents decreased by 53 % between 2001 and 2016 (Figure 1) at the level of the EU-28. Whereas a general trend towards fewer road traffic fatalities has long been observed in all countries in Europe, the downward trend stagnated in 2013 and the following years have seen the total number of fatalities in the EU-28 fluctuate around 26 000 cases. The target of halving the number of road accidents fatalities between 2000 and 2010, as outlined in the European Commission’s 2001 White Paper, has not been reached, albeit by a small margin (it was reached in 2012). The following White Paper published in 2011 reiterated the goal of halving the number of road accident deaths between 2010 and 2020. In 2016, a 19% decrease compared to 2010 was registered. At national and regional level, there are significant variations, as outlined further in this article.

An evaluation of the risk of losing one’s live in a road traffic accident is best expressed as a ratio of the number of fatalities per billion vehicle-kilometers. Unfortunately, the traffic performance is not consistently available. Therefore, the ratio per million inhabitants has been taken as a proxy.

Road mobility comes at a high price in terms of lives lost: in 2016, 25 699 persons were killed in road accidents within the EU-28. 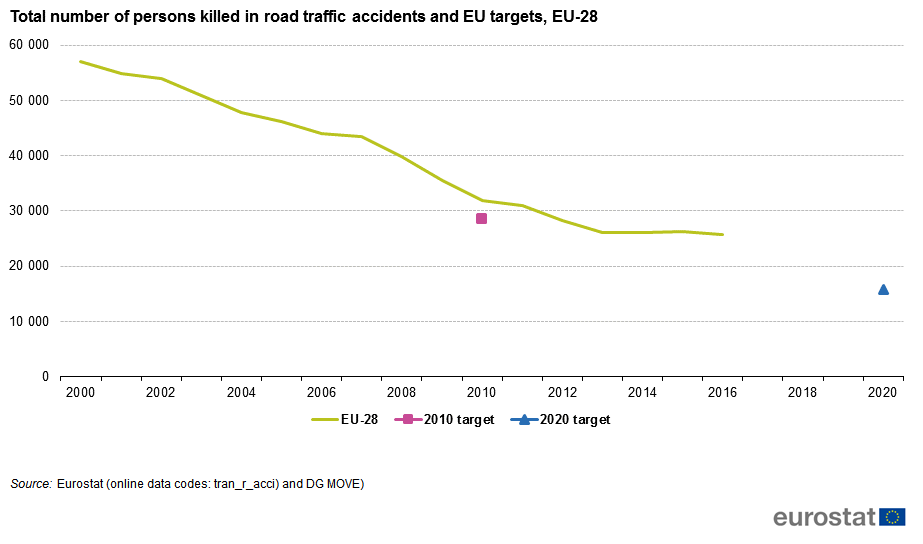 The number of road traffic fatalities in the various countries and regions depends on both structural differences (size of the country/region; composition, density and quality of the road network, characteristics of the population) and socio-economic differences (characteristics of the vehicle stock, transit and tourist traffic, behavioural aspects, etc.). In general, improvements in the passive and active safety of new passenger cars have a positive effect on the reduction of road traffic accident victims.

The two last columns of Table 1 show the percentage change in the number of road accident fatalities for two different time spans: 2000 to 2010 and 2010 to 2016. For the former period, the decrease among the individual countries ranged between -63 % and 0 %. Recalling the White Paper’s target, a decrease of 50% or more was achieved in the Baltic States, Germany, Spain, Luxembourg, Slovenia and Sweden. 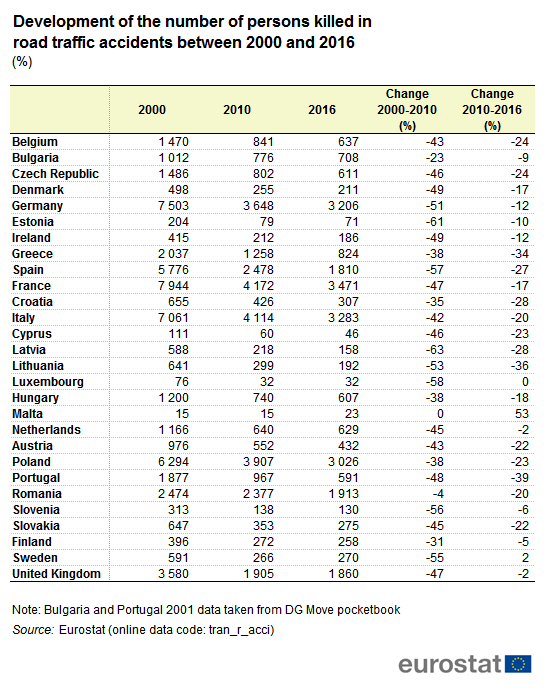 Table 1: Development of the number of persons killed in road traffic accidents between 2000 and 2016 (%)
Source: Eurostat, Eurostat (tran_r_acci)

For the years after 2010, the number of fatalities continued to drop at a considerable rate in many countries, and most notably in Greece, Lithuania and Portugal. Conversely, decreases were less significant in the Netherlands, Finland and the United Kingdom, countries that have been among the safest countries since many years. The only countries where the number of fatalities registered in 2016 was higher than in 2010 were Sweden (by a very small margin: 4 fatalities) and Malta. For the latter country, a noticeable percentage increase was registered (+53%), which should however be seen against the limited size of the country and the absolute numbers involved.

At the level of the EU-28, the number of fatalities per million inhabitants was 50.5 in 2016. The statistical likelihood of getting killed in a road traffic accident can be close to four times higher between individual EU countries: at Member State level, Sweden and the United Kingdom have the lowest rate (both 27 – see Figure 2), followed by Denmark and the Netherlands (both 37). On the other end of the spectrum, the highest values were calculated for Bulgaria (99) and Romania (97), but also for Latvia and Poland (both 80).

Figure 2 also visualizes the progress that has been made by the individual Member States in 15 years. Despite a growing vehicle fleet and a generally higher traffic performance, road traffic has become considerably safer especially in Greece, Spain, Cyprus, Latvia, Lithuania, Luxembourg and Portugal. But even within a country, differences can be considerable. This may be linked to numerous factors, from the type and length of the available regional road network, the population density, the number of commuters or the presence of large road axes used for transit traffic to name but a few. 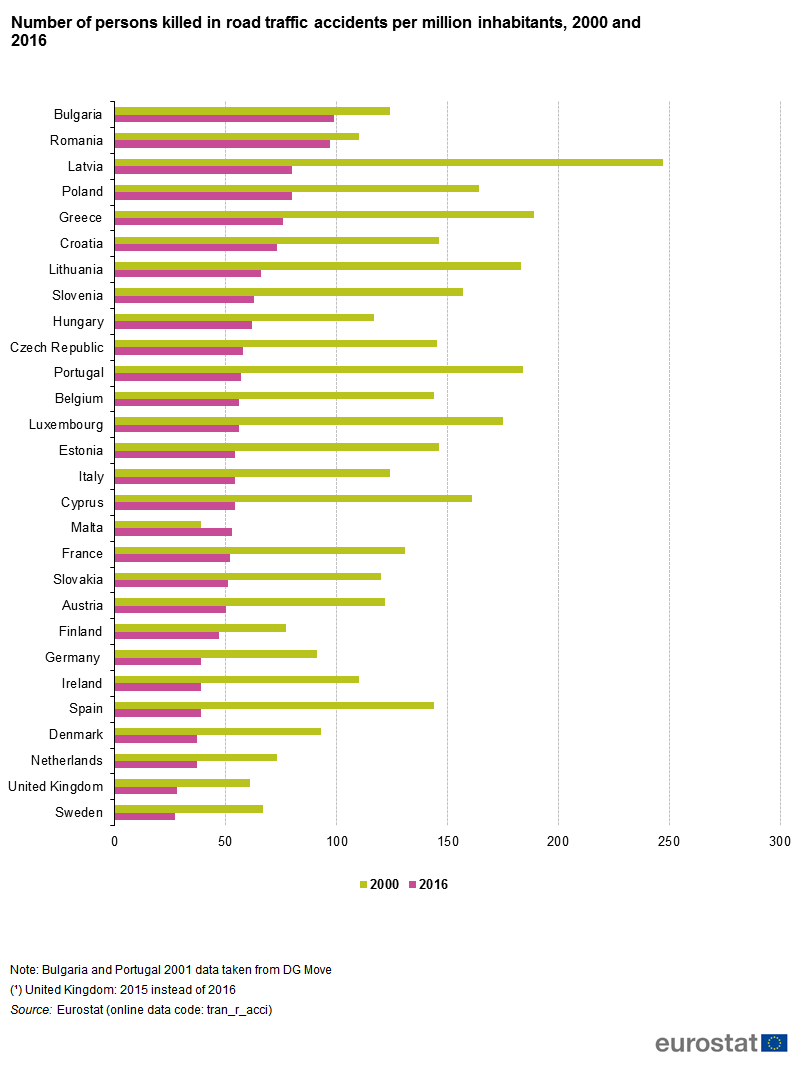 Map 1 shows the number of deaths in road traffic accidents per million inhabitants by NUTS 2 region in 2016. 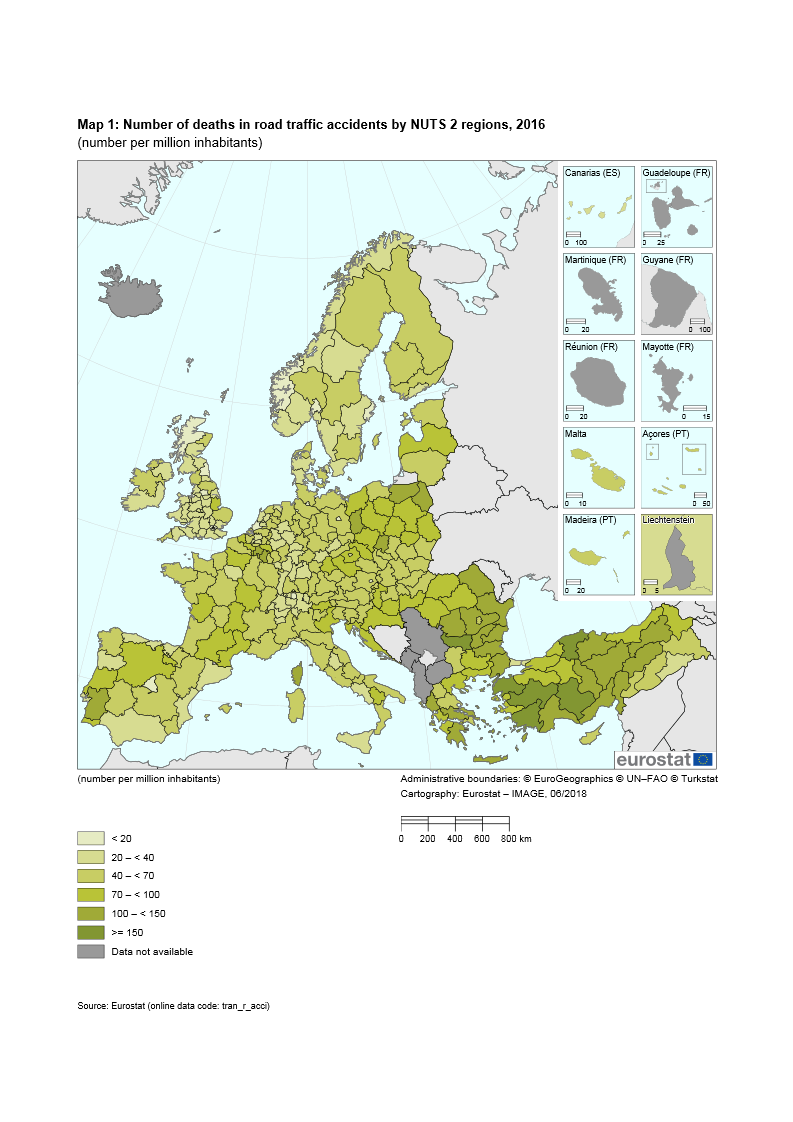 The low ratios registered in major urban regions may be explained by the higher proportion of public transport and the use of other transport modes, such as cycling and walking. While road accidents in general are more frequent in city traffic, lower average speed reduces the probability of serious and fatal injuries. However, an increase in the number of accidents involving non-motorised individuals may also lead to an increase in the number of persons injured. The combined effect of lower speeds and of more accidents involving more vulnerable travellers is not clear-cut.

The number of road traffic fatalities per million inhabitants in 2016 in the individual NUTS level 2 regions ranged from 10 to 153. The regions that recorded the lowest ratios are Wien (10 persons killed per million inhabitants), Ciudad Autónoma de Melilla (12), Stockholm (12) and the Région de Bruxelles-Capitale (14). Especially Vienna and the capital region of Bruxelles have registered a considerable decrease (-41% and -50%, respectively). At the other end of the scale is the Bulgarian Severozapaden region (153), Alentejo and, more surprisingly, the Belgian region of Prov. Luxembourg (BE), with 138 fatalities per million inhabitants. This high number may be explained by the fact that this region is crossed by a major road axis with considerable transit traffic. The adjacent region Province de Namur crossed by the same transit route has a ratio of 100 persons killed per million inhabitants. Prov. Luxembourg (BE) is however sparsely populated and moreover features a substantial number of cross-border workers (to the neighbouring Grand-Duchy of Luxembourg), which generates additional traffic. The low population density and the comparatively dense traffic (and hence frequency of road traffic accidents) can then result in a high ratio. As mentioned earlier, a ratio based on traffic or transport performance (vehicle-kilometres or passenger-kilometres) would render a better image, but these data are not available at regional level.

This being said, the map shows that lowest rates are generally found among regions of the northern and north-western EU Member States (see Table 2). At the other end of the spectrum, the highest rates are found in the southern and eastern European countries. There are many Greek, Bulgarian and Romanian regions with high rates (see Table 3). These figures might be partly explained by the quality of the road network and the safety standards of the vehicle fleet. 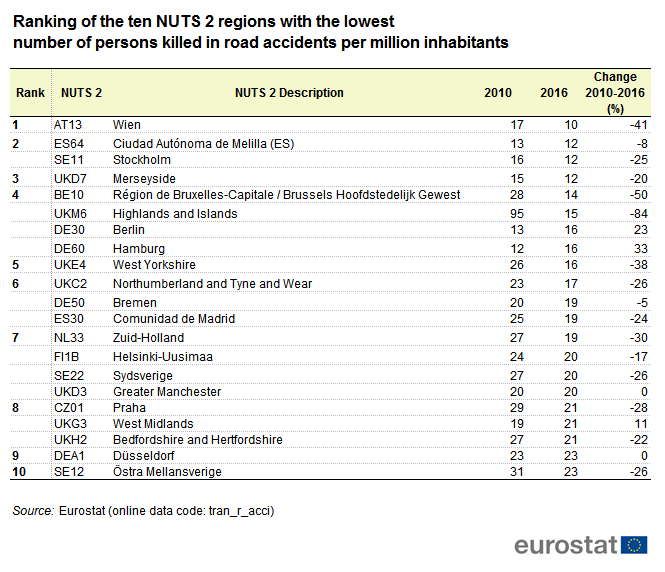 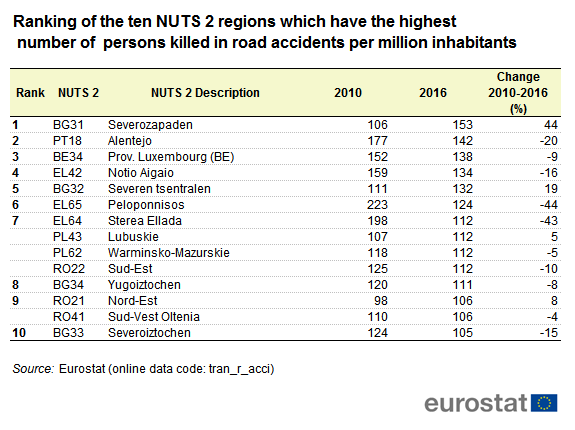 Statistically, the numbers of road accident fatalities are particularly low for many regions with high traffic volumes. This is true especially in many regions in western Germany and England, in particular around major cities, and in most parts of the Netherlands. Around major cities and transport hubs (e.g. seaports), high traffic volumes cause congestion, which reduces average speeds and, therefore, also the likelihood of fatalities when accidents do occur. A closer look at this phenomenon also reveals that many of these regions tend to have high motorway density (expressed as length of motorways in relation to the region’s total territory). In general, motorways are far safer than secondary roads.

In contrast, fatality rates are high in regions with a low motorway density, such as most regions in Romania, Hungary and the Czech Republic, except their capital regions, all Bulgarian and Polish regions, the Baltic Member States, and many rural areas in France and Spain. These data suggest that the high proportion of road traffic using motorways is an important factor behind the low number of road fatalities in many regions. The region with the highest number of fatalities per million inhabitants, the Bulgarian Sverozapaden region, has virtually no motorways.

Topographic features, climate and weather conditions are other elements that influence the per-inhabitant fatality levels. Driving in mountainous regions is often more dangerous than in flat areas. In addition, these regions often attract a high volume of tourist traffic, thus adding to local traffic and, hence, the number of accidents reported per inhabitant.

Eurostat collects, compiles and disseminates a variety of regional indicators. Data on road accidents are currently collected for the EU Member States and the Candidate countries on a voluntary basis via annual questionnaires.

In the past years, the data collection has been streamlined, as equivalent data are also collected for CARE, the Community Road Accident Database. Coherency checks have been performed and for a number of countries, regional road accident data collected through voluntary questionnaires so far have been replaced by CARE data.

All data displayed in this article are annual, with available time series going back to 1990.

The precise definitions of all variables used can be found in the 'Glossary for transport statistics'. The basic data used in the map has been extracted from Eurostat’s website.

In response to the growing concern shown by European citizens over road safety, the European Union made this issue a priority of its common transport policy set out in the 2001 White Paper on transport ‘Time to decide’ and its mid-term review in 2006 (‘Keep Europe moving — Sustainable mobility for our continent’). In that White Paper, the European Commission set the target of halving the number of road fatalities between 2000 and 2010. To achieve this objective, a number of steps have been taken, including introducing higher vehicle safety standards, improving the quality of road infrastructure, extending the traffic regulations combined with enforcing the existing regulations and improving driver education. Effectively, the total road death number was cut by 44 % between 2000 and 2010. The target of halving the 2000 number was reached in 2012.

Following on, the White Paper of 2011 (“Roadmap to a Single European Transport Area - Towards a competitive and resource efficient transport system”) outlines a roadmap of 40 concrete initiatives for the next decade. Concerning road traffic, the Commission has adopted an ambitious Road Safety Programme which aims to cut road deaths in Europe in half between 2010 and 2020. The programme sets out a mix of initiatives, at European and national level, focusing on improving vehicle safety, the safety of infrastructure and road users’ behaviour.

Title(s) of second level folder (if any)

Title(s) of third level folder (if any)