Polish trucks registered the highest number of tonne-kilometres in the EU in 2020, in particular due to high international, cross-trade and cabotage transport.

The freight transported by road on a country’s territory in terms of tonnes was the highest in Germany in 2020, just as in the previous year. 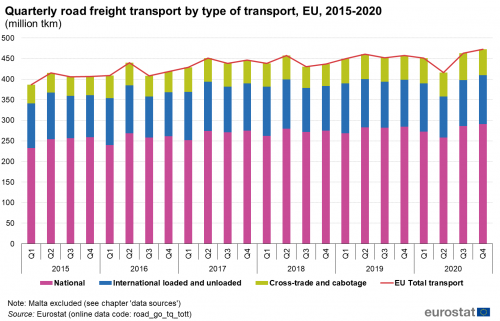 This article presents the main trends in road freight transport in the European Union (EU) up to and including 2020. It describes the trend up to 2019, before the outbreak of the Covid pandemic, and contrasts this with the impact of the pandemic on freight transport by road in 2020. National, international, cross-trade and cabotage transport are all analysed. Road freight transport by type of goods and distance classes are also presented, as are goods moved on the national territory of countries and country-to-country flows.

EU road freight transport fell from 2019 to 2020, the pandemic reducing both international and national transport

In terms of tonne-kilometres (tkm), European road freight transport fell by 0.9 % from 2019 to 2020. This broke the upward trend seen in recent years, culminating in an increase by 3.2 % from 2018 to 2019 (see Table 1a and Table 1b). However, the lockdowns and the imposed measures by many Member States in 2020 to counter the Covid pandemic had a negative impact on freight transport by road, in particular during the second quarter of 2020 (Q2 2020). (see Figure 1)

In 2020, Poland (19.7 % of EU total tkm) reconfirmed its position as one of the most important countries for road transport in Europe, ahead of Germany (16.9 %) and Spain (13.4 %). Almost two thirds (65.1 % ) of the Polish transport performance were either international transport, cross-trade or cabotage, while over one third was national transport.

Among the Member States with the largest road transport industries, Poland was the only that recorded an increase from 2019 to 2020, with total road freight transport up 1.7 %. This was driven by increases in national transport as well as in cross-trade and cabotage, although international trade fell. Germany, France, Spain and Italy all saw decreases, ranging from -2.3 % to -3.4 %, with both national and international transport falling in all four countries. 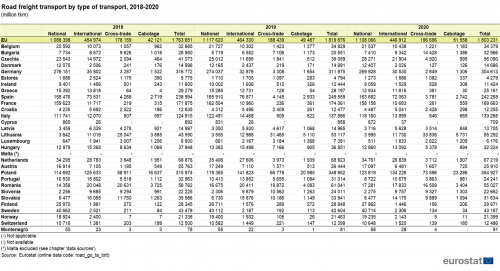 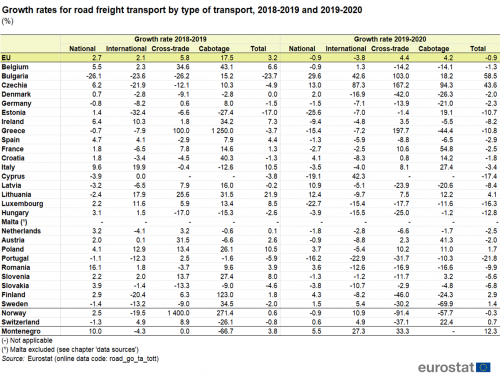 The effects on road freight transport of the Corona-related lockdowns and restrictions on cross-border movements can be clearly seen in the quarterly data presented in Figure 1. Normally, the second quarter of the year sees the highest number of tkm performed. However, the second quarter of 2020 experienced the height of these restrictive measures to counter the Corona pandemic. Compared to the first quarter of 2020, the number of tkm performed in the EU fell by 7.9 %, to 416.0 billion tkm; compared to the same quarter the year before, i.e. Q2 2019, the tkm decreased by 9.7 %. However, already in the third quarter of 2020, road freight transport recovered to levels even higher than before the pandemic, with an increase compared to the same quarter in 2019 of 2.4 % and 3.3 % in the fourth quarter of 2020.

Mining and quarrying products make up one quarter of total tonnage

In 2020, as in previous years, 'metal ores and other mining and quarrying products' was the largest product group transported in terms of tonnage, accounting for 3 254 million tonnes and a share of 25.0 % in total tonnage in the EU. Other important product groups were 'other non-metallic mineral products' and 'food, beverages and tobacco', each with a share of 12.2 % in the total, and 'agricultural, forestry and fishery products' (9.5 %).

In terms of tonnage, the only rises between 2019 and 2020 were recorded for 'agricultural, forestry and fishery products', 'food, beverages and tobacco' and ‘mail and parcels’, each of these product groups growing by 2.0 %. All other product groups declined, with the tonnage transported by road of 'coal, lignite, crude petroleum and natural gas' falling sharply (-28.4 %), as did the tonnages of ‘transport equipment’ (-16.5 %) and 'textiles and textile products; leather and leather products' (-10.2 %). In the longer term, the 'coal, lignite, crude petroleum and natural gas' was the only product group with a substantial decrease in tonnage between 2015 and 2019 (-23.2 %). The only other groups declining over this period were the group of ‘unidentifiable goods’ (-3.9 %) and, marginally, the group of ‘secondary raw materials; municipal wastes and other wastes’ (-0.4 %). In sharp contrast, the tonnage of ‘mail and parcels’ increased by 42.3 % over the same period.

In terms of tkm, the highest rises between 2019 and 2020 were for ‘furniture and other manufactured goods not elsewhere covered' (+13.5 %), far ahead of 'food products, beverages and tobacco' (+3.4 %). However, 'food products, beverages and tobacco' recorded the largest increase in actual tkm, with an increase by 10.2 billion tkm to 311 billion tkm. At the other end of the scale, notable decreases were registered for ‘household and office removals, motor vehicles moved for repair and other non-market goods’ (-14.3 %), 'textiles and textile products; leather and leather products' (-13.0 %) and ‘transport equipment' (-11.4 %). 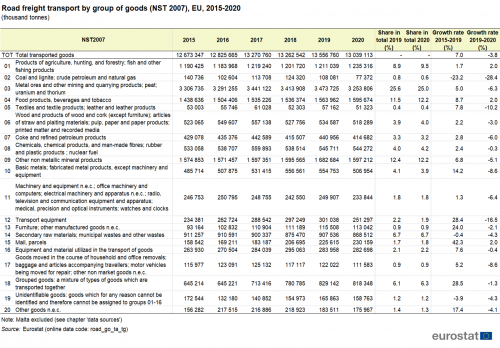 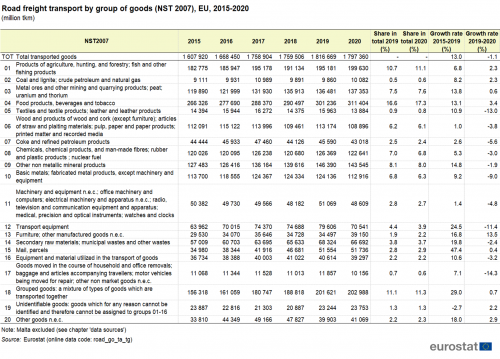 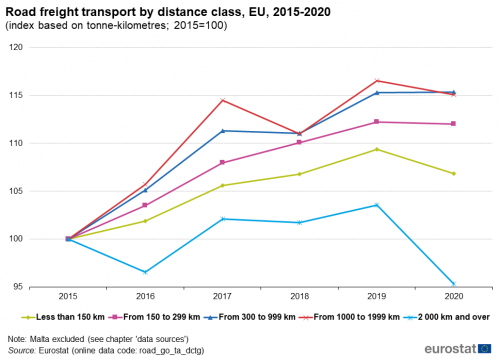 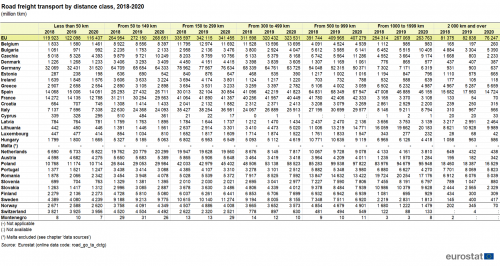 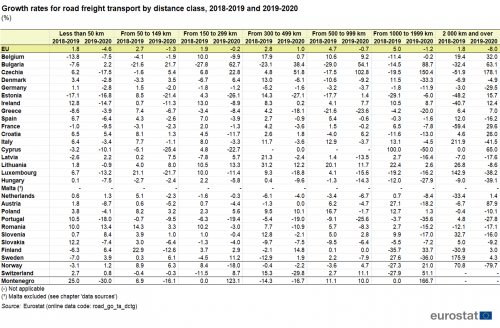 Table 4 shows road freight transport by type of goods over the period 2015 to 2020, measured in tonnes, split between movements of less than 300 km and movements of 300 km or more. It also provides the trend over the pre-pandemic period 2015-2019 and the change from 2019 to 2020. For transport of less than 300 km, 'coal, lignite, crude petroleum and natural gas' was the only product group to record a larger decrease in the tonnage transported by road over the period 2015-2019 (-26.0 %). Other categories that experienced a reduction of more than 1 % in tonnage transported over shorter distances in this period were 'unidentifiable goods' (-3.6 %) and ‘secondary raw materials and wastes’ (-1.8 %). However, from 2019 to 2020 the tonnage transported over less than 300 km fell for most product groups. The sharpest fall was again recorded for 'coal, lignite, crude petroleum and natural gas' (-31.9 %), with notable falls in tonnage also for ‘transport equipment’ (-18.4 %) and ‘furniture and other manufactured goods’ (-12 %). ‘Mail and parcels’ was the only group that recorded a rise in tonnage of more than 2 % in 2020 (+3.9 %).

Overall, transported tonnage over 300 km and more increased by 15.5 % over the period 2015-2019. This was reflected in large growth in tonnage for many product groups, with ‘mail and parcels’ standing out with an increase of +49.4 %. Increases of 25 % or more were registered also for ‘secondary raw materials and wastes’ (+30.4 %), ‘grouped goods transported together’ (+27.2 %), 'coal, lignite, crude petroleum and natural gas' (+26.4 %) and ‘transport equipment’ (+25.8 %). Only the tonnage of unidentified goods fell over this period. It is notable that the tonnage transported over distances of 300 km and more was little impacted by the Covid pandemic, with total tonnage only falling by -0.1 % from 2019 to 2020. However, within this overall picture, there were stronger effects on certain categories. The tonnage of ‘goods moved in the course of household and office removals’ fell by almost a fifth (-19.6 %), while also long distance tonnage of 'textiles and textile products; leather and leather products' (-15.5 %) and ‘transport equipment’ (-12.0 %) fell substantially. In contrast, the tonnage of ‘furniture and other manufactured goods’ increased by 16.7 %.

In 2020, hauliers from Germany, France, Spain, Poland and Italy carried two thirds of the road freight transported in the EU

In term of transport of goods by road on the national territory, measured in tonnes, Germany, France, Spain, Poland and Italy recorded the highest tonnages among the EU Member States in both 2019 and 2020. Together, these countries accounted for close to two thirds of the total tonnages transported in the European Union, with 65.4 % in both 2019 and 2020. The goods transported within Germany or loaded/unloaded in Germany represented one quarter of total tonnage in both 2019 and 2020 (24.6 % and 25.0 %, respectively), with Spain and France together making up close to another quarter of the total (see Figure 3a and Figure 3b). Considering international transport (i.e. goods entering and leaving the country, including cross-trade), the pattern did not change much over the last years. International transport of goods loaded/unloaded in Germany remained the highest tonnage, ahead of France. The Netherlands and Belgium, with their large North Sea ports, also recorded relatively high tonnages of goods loaded/unloaded for international transport. 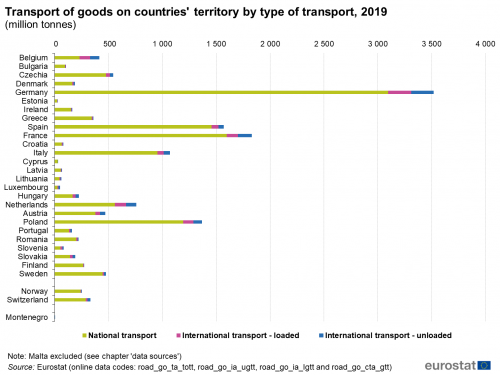 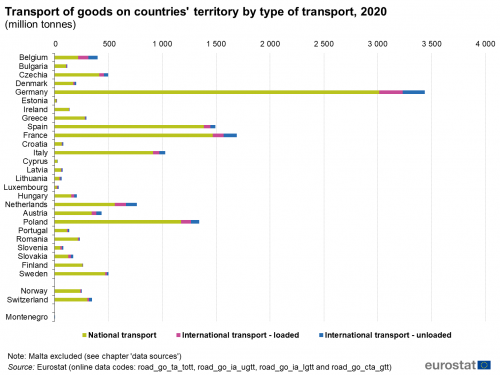 At the more detailed level of EU/extra-EU country-to-country freight transport flows (see Table 5), Switzerland, United Kingdom and Norway were important trading partners. The main extra-EU flows have generally been between these countries and EU Member States neighbouring them. In 2019, the three main such traffic flows in terms of tonnes transported were between Switzerland and Germany (14.6 % of the total extra-EU road transport tonnage), followed by the flow between the United Kingdom and Ireland (11.9 %) and the one between Norway and Sweden (8.7 %). 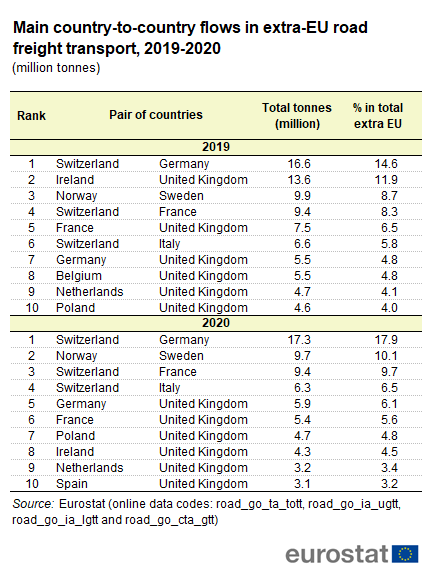 Table 6 shows the share of transport performed by haulier origin for the main intra-EU country-to-country flows. Germany was one of the origin or destination countries in around half of the top 20 country-to-country flows in both 2019 and 2020, illustrating the central role of Germany in intra-EU trade flows. However, German hauliers’ share of the total volumes transported was less than half in most bilateral flows, with as little as 3.4 % in 2019 and 2.9 % in 2020 in the bilateral traffic between Germany and Poland. German hauliers recorded the highest share in transport between Germany and Denmark (59.6 % in 2019, 55.8 % in 2020) and between Germany and Luxembourg (51.4 % in 2019).

Among hauliers from other Member States than the two origin and destination countries, Polish hauliers were by far the most common group. Of the Top 20 intra-EU country-to-country transport flows in 2020, Polish hauliers were the main transporters from other Member States for 13 connections. Of the remaining seven connections, Poland was origin or destination country in four. 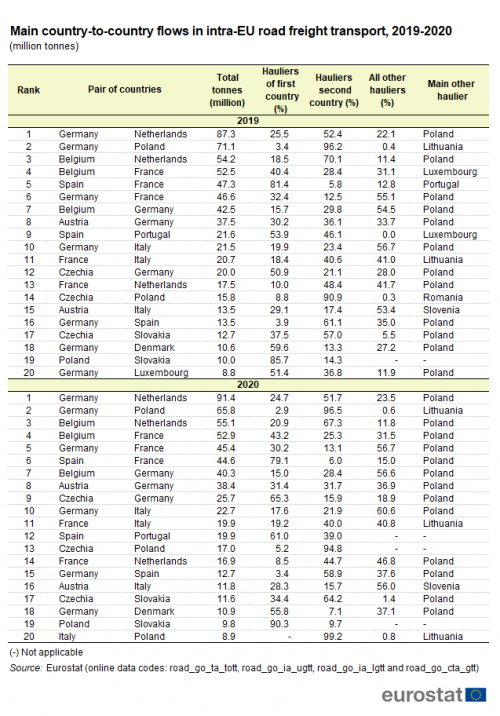 Sweden: A break in series occurred in 2014 following a change in methodology. On the basis of a specific survey, Sweden corrected the European road freight survey results for trucks participating to the sample which were not in use over the surveyed period.

Road transport between two places (a place of loading and a place of unloading) located in the same country, by a vehicle registered in that country.

International transport as presented in this publication is based on goods loaded and unloaded in the reporting Member States. Each reporting country reports all activities of a road motor vehicle inside and outside its national territory. There is thus no risk of double counting at European level.

Starting with the reference year 2008, Regulation (EC) No 1304/2007 establishes NST 2007 as the sole classification for goods carried in road freight transport. For detailed information on the NST 2007 classification, please refer to ‘Ramon’, Eurostat’s Metadata Server.

More detailed data and metadata are available in the Eurostat dissemination database.

The volume of goods entering a country is the sum of international transport and cross-trade unloaded in the country by hauliers from all reporting countries.

The volume of goods leaving a country is the sum of international transport and cross-trade loaded in the country by hauliers from all reporting countries.

Figure 3a and Figure 3b

Data availability: The figures presented in this publication have been extracted from Eurostat’s free dissemination database and reflect the state of data availability on 25/10/2021.

Data presented in this publication were collected in the framework of Regulation (EU) No 70/2012 on statistical returns in respect of the carriage of goods by road (recast). These data are based on sample surveys carried out in the reporting countries, i.e. the EU Member States, Norway, Switzerland and Montenegro, and record the road goods transport undertaken by vehicles registered in these countries.

Reporting countries use their own national surveys for the collection of data based on returns from road hauliers. The results are microdata referring to vehicles and their linked journeys providing detailed information on goods transported. At the European level, common aggregation procedures have been used that might diverge from national practices. Differences might therefore occur between the figures in this publication and national values. For the distinction between national and international transport, journey information is used at the European level, which might cause differences in corresponding values from those countries that are using goods information for these statistics.