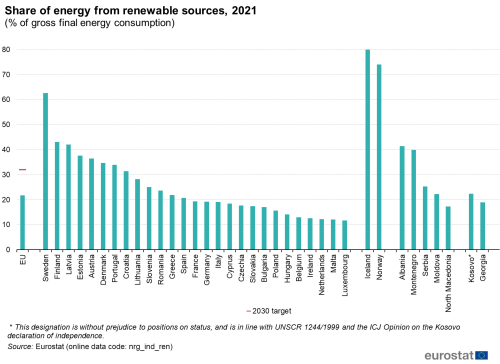 Becoming the world’s first climate-neutral continent by 2050 is the objective behind the European Green Deal (COM(2019) 640 final), the very ambitious package of measures that should enable European citizens and businesses to benefit from sustainable green transition.

Share of renewable energy more than doubled between 2004 and 2021

The EU reached a 21.8 % share of its gross final energy consumption from renewable sources in 2021, around 0.3 percentage points lower than in 2020. The lifting of the restrictions linked to the COVID-19 pandemic probably played a role for this decrease. In addition, the change in the legal basis and the accounting methodology also contributed to this development (see "Data sources" for more details). Figure 1 shows the latest data available for the share of renewable energies in gross final energy consumption. 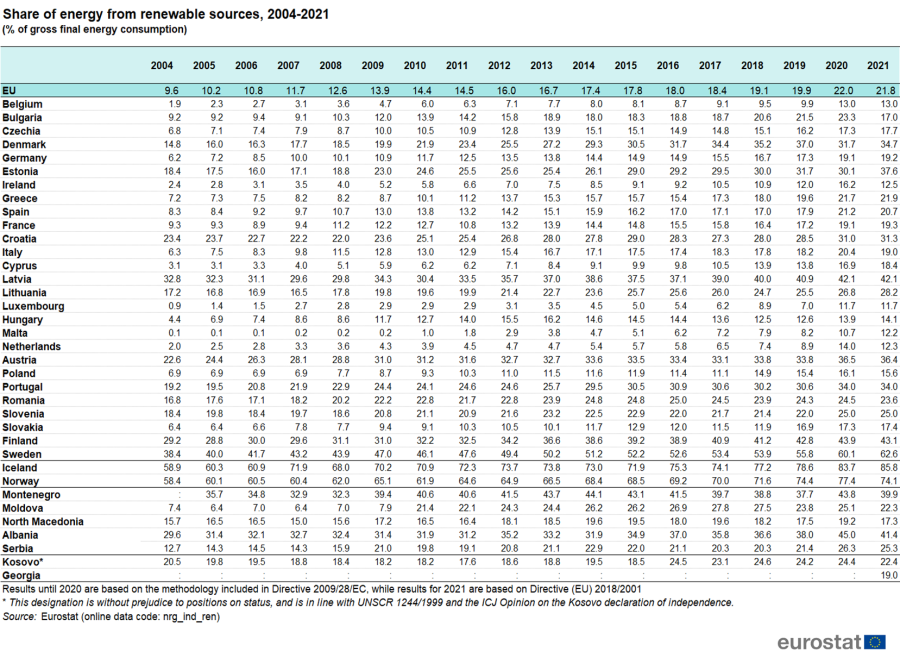 The rest of this article's statistical findings deal with the developments from 2004 to 2021 in the share of energy from renewable sources in three areas: electricity, heating and cooling, and transport.

Wind and water provide most renewable electricity; solar is the fastest-growing energy source

The accounting rules in Directive 2009/28/EC prescribe that electricity generated by hydro power and wind power have to be normalised to account for annual weather variations (hydro is normalised over the last 15 years and wind over the last 5 years). In addition, starting in 2021, wind is separately normalised between on-shore and off-shore, according to Directive (EU) 2018/2001. This article presents the results applying these accounting rules.

Wind and hydro power accounted for more than two-thirds of the total electricity generated from renewable sources (37.5 and 32.1 %, respectively). The remaining one-third of electricity generated was from solar power (15.1 %), solid biofuels (7.4 %) and other renewable sources (7.9 %). Solar power is the fastest-growing source: in 2008, it accounted for 1 %. This means that the growth in electricity from solar power has been dramatic, rising from just 7.4 TWh in 2008 to 163.8 TWh in 2021.

The share of energy from renewable sources in electricity is presented in Figure 2. 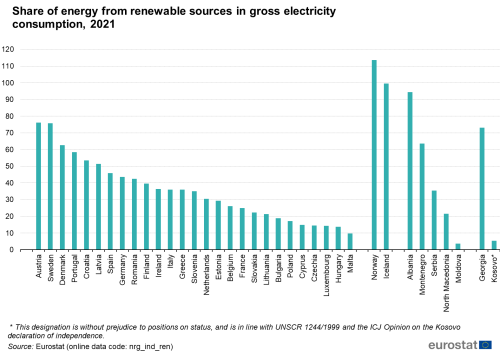 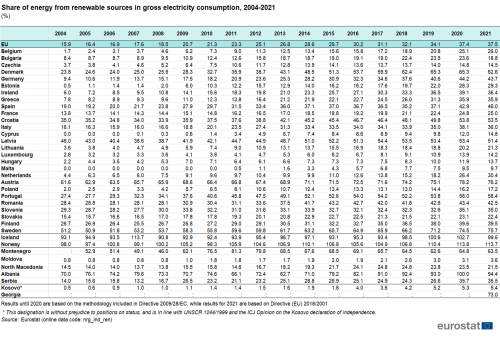 In 2021, renewable energy accounted for 22.9 % of total energy use for heating and cooling in the EU, increasing from 11.7 % in 2004. Developments in the industrial sector, services and households contributed to this growth. Ambient energy captured by heat pumps for heating purposes is taken into account (and from 2021 onwards, also renewable cooling). The share of energy from renewable sources in heating and cooling is presented in Figure 3. 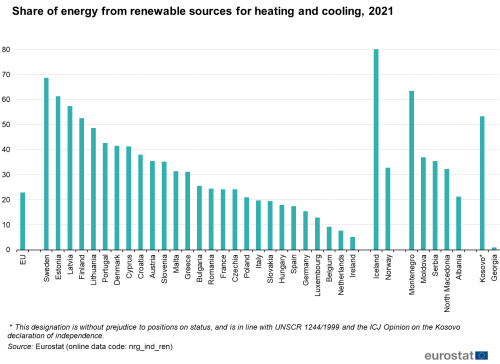 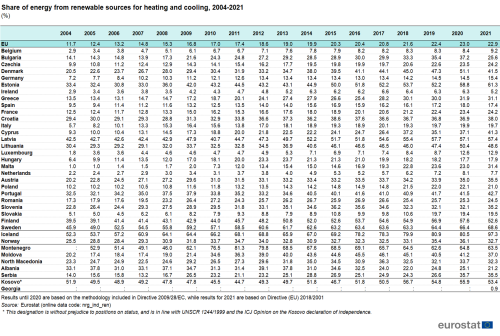 9.1% of renewable energy used in transport activities in 2021

The EU agreed to set a common target of 14 % for the share of renewable energy (including liquid biofuels, hydrogen, biomethane, ‘green’ electricity, etc.) used in transport by 2030. 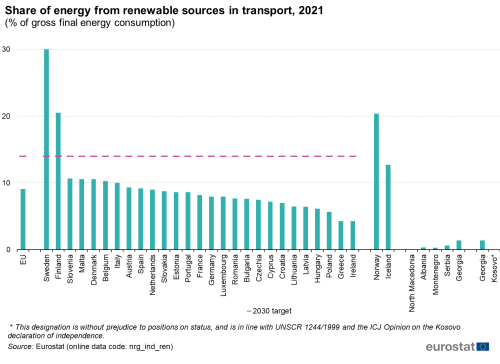 In 2021, all EU Member States, with the exception of Denmark, Croatia, Lithuania, Malta and Finland, registered a decrease in the average share of energy from renewable sources in transport compared with 2020, possibly linked to the increase in transport activities due to lifting of COVID-19 restrictions and also related to the change of methodology described in the section "Data sources". 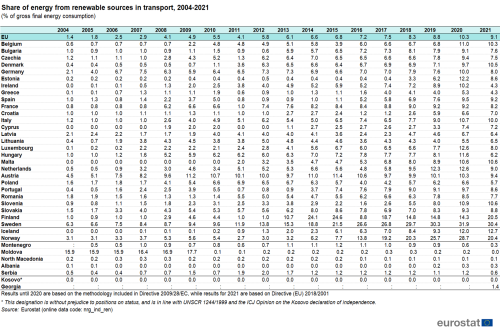 The data presented in this article are based on energy statistics covered by Regulation (EC) No 1099/2008 on energy statistics. In addition, the methodology laid down in Directive 2009/28/EC is used until reference year 2020. From that year onwards, the calculation of the share of energy from renewable sources follows the accounting rules set down in Directive 2018/2001/EU on the promotion of the use of energy from renewable sources. Due to the change of legal basis, a break in series occurs between 2020 and 2021. Another important aspect to take into account when comparing 2020 and 2021 data is the lifting of restrictions linked to the COVID-19 pandemic, which produced an increase of energy consumption and a possible decrease of the share of renewables. Readers are encouraged to analyse the differences between both Directives (RED I and RED II), the energy sector and all national specificities before drawing any conclusions from the comparison of year 2021 with previous time series.

In particular, there are some cases in which the share of renewables substantially changed from 2020 to 2021:

- Bulgaria: more than 6% decrease, due to the inability to report a certain part of their solid and gaseous biofuels as compliant. This might change in the future once they can benefit from a certification procedure.

- Denmark: around 3% increase, due to the reduction of their statistical transfers (as seller).

- Estonia : around 7.5% increase, mainly because it started to report the use of heat pumps for heating purposes (which, although already existed, Estonia had not reported it in the past).

- Ireland: more than 3.5% decrease, due to their decision not to use statistical transfers in 2021, as well as to the inability to report a certain part of their solid and gaseous biofuels as compliant. This might change in the future once they can benefit from a certification procedure.

Data are available for all EU Member States, as well as Iceland, Norway, Montenegro, Serbia, Albania, North Macedonia, Kosovo and Moldova. In general, data are complete and comparable across countries.

Statistical revisions in data sets submitted by reporting countries in their annual energy questionnaires have played a role on the change in data over a long period. As a consequence of the Renewable Energy Directive and the requirement of the Energy Statistics Regulation to report detailed energy consumption data in households, countries are monitoring much closer the flows of renewable energy commodities in their economies. A very significant case is the consumption of biomass, where countries are launching new more detailed surveys that usually result in higher quantities of biomass and therefore an increase of the final energy consumption of biomass. As a consequence of several countries revising their data, significant increases have been observed in their share of energy from renewable sources (e.g. Croatia, France, Lithuania, Hungary and recently Poland).

Energy production from non-renewable municipal wastes was deducted from the contribution of biomass to heating and electricity generation. Consumption for pipeline transport was included in gross final consumption of energy, in line with the sectoral classification of the Energy Statistics Regulation. To improve accuracy and consistency with national statistics in calculating renewable energy shares, national calorific values were used, where available, for converting quantities of all energy products into energy units, instead of the default calorific values. The exception is the use of fuels in transport, where calorific values from Annex III or RED I or RED II are used.

Data for the period 2004-2010: Directive 2009/28/EC did not yet exist or had not been transposed into national legislation. The values in these years are not used for any measurement of legislative compliance with the indicative trajectory defined in part B of Annex I of the Directive. The Renewable Energy Directive 2009/28/EC stipulates that only biofuels and bioliquids that fulfil sustainability criteria should be counted for the targets. It was decided that for the years 2004-2010 all biofuels and bioliquids would be counted towards the numerator of the share of energy from renewable sources.

Data for 2021 and onwards: Compliance with Article 29 (‘Sustainability and greenhouse gas emissions saving criteria for biofuels, bioliquids and biomass fuels’) has to be judged also with respect to Article 30 (‘Verification of compliance with the sustainability and greenhouse gas emissions saving criteria’). As of data from 2021, countries should report as compliant only those biofuels, bioliquids and biomass fuels for which compliance with Articles 29 and 30 can be fully demonstrated. Otherwise (even when compliance cannot be demonstrated because there is not a national legal basis in place), biofuels, bioliquids and biomass fuels should not be reported as compliant and do not count towards the numerator of the share of energy from renewable sources.

Becoming the world’s first climate-neutral continent by 2050 is the greatest challenge and opportunity of our times. To achieve this, on 11 December 2019 the European Commission presented the European Green Deal (COM(2019) 640 final), the most ambitious package of measures that should enable European citizens and businesses to benefit from a sustainable green transition. Measures accompanied with an initial roadmap of key policies range from ambitiously cutting emissions, to investing in cutting-edge research and innovation, to preserving Europe’s natural environment. Above all, the European Green Deal sets a path for a transition that is just and socially fair. It is designed in such a way as to leave no individual or region behind in the great transformation ahead.

The Green Deal is an integral part of the Commission’s strategy to implement the United Nation’s 2030 Agenda and the sustainable development goals, and the other priorities announced in President von der Leyen’s political guidelines. As part of the Green Deal, the Commission will refocus the European Semester process of macroeconomic coordination to integrate the United Nations’ sustainable development goals, to put sustainability and the well-being of citizens at the centre of economic policy, and the sustainable development goals at the heart of the EU’s policymaking and action. The European Commission has set out several energy strategies for a more secure, sustainable and low-carbon economy. Aside from combating climate change through a reduction in greenhouse gas emissions, the use of renewable energy sources is likely to result in more secure and diverse energy supply, less air pollution, as well as job creation in environmental and renewable energy sectors.

Building on the 20% target for 2020, on 11 December 2018, the EU adopted Directive 2018/2001/EU on the promotion of the use of energy from renewable sources. The new regulatory framework includes a binding renewable energy target for the EU for 2030 of 32 % with an upwards revision clause by 2023.

The Commission presented Europe’s new 2030 climate targets, including a proposal for amending the Renewable Energy Directive, on 14 July 2021. It seeks to increase the current target to at least 40% renewable energy sources in the EU’s overall energy mix by 2030.

On 18 May 2022, the Commission published the REPowerEU plan, which sets out a series of measures to rapidly reduce EU’s dependence on Russian fossil fuels well before 2030 by accelerating the clean energy transition. The REPowerEU plan is based on three pillars: saving energy, producing clean energy and diversifying the EU's energy supplies. As part of its scaling up of renewable energy in power generation, industry, buildings and transport, the Commission proposes to increase the target in the directive to 45% by 2030.