This article provides an overview of six regional typologies used in the 5th Cohesion Report. The goal of each of these regional typologies is to provide an analytical and descriptive lens on these types of territories through the use of NUTS-3 data.

Not all these territories, however, can be easily identified at the NUTS-3 level, depending on the type of territory and the size and shape of the NUTS-3 region. As a result, classifications on a lower geographical level remain necessary and may capture these territories better. However, annual data availability below NUTS 3 for all of Europe is extremely limited and does not allow for regular monitoring. These typologies are not intended for direct policy use.

For each typology a short overview of the evolution of the definition, the methodology and a map are provided. Where possible, EFTA and Candidate Countries have been included in this paper to facilitate a wider use of these typologies. These typologies will be updated after each round of NUTS modifications. 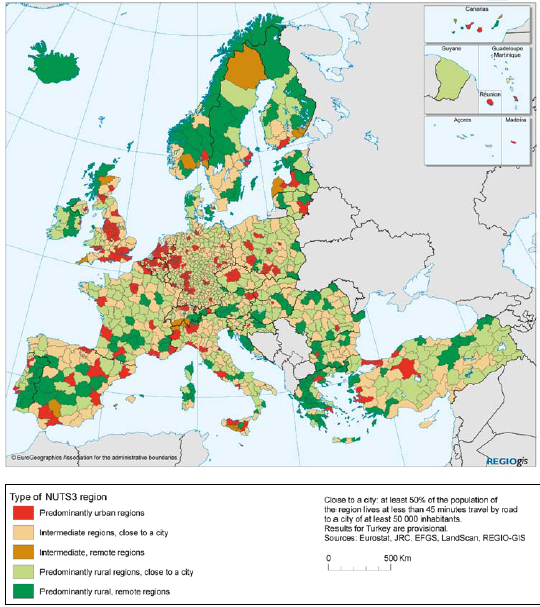 This is a new classification that combines elements from the OECD classification with the new urban-rural typology developed by the Commission (see also: Eurostat regional yearbook 2010, pp. 240-253).

The OECD classification was developed in the early 1990s with a three-way classification (predominantly urban; intermediate; predominantly rural) based on the population density of districts (Local Administrative Unit Level 2 or LAU2). In 2009, the OECD extended its classification to include the remoteness dimension. It followed the approach developed by Dijkstra and Poelman who tested such an approach for the EU and found significant socio-economic differences between rural regions close to a city and remote rural regions.

This remoteness dimension has been adopted by the OECD and is not expected to change. Modifications of the road network, data about the road network, population distribution within the regions, or population size and the definition of cities, may have an impact on the classification.

The new urban-rural typology as developed by the Commission has already been presented to many stakeholders for information and comments. The Commission will assess the comments and may adapt the methodology if necessary and feasible.

This typology will be updated when a new population grid becomes available for the entire EU.

The urban-rural including remoteness typology classifies all NUTS-3 regions according to criteria based on population density and population distribution (urban-rural). This classification is combined with a distinction between areas located close to city centres and areas that are remote. It creates five categories of NUTS-3 regions:

The classification is completed in three steps: identify rural area population, classify NUTS-3 regions and adjust classification based on the presence of cities.

This typology uses a simple two-step approach to identify population in rural areas:

NUTS-3 region are classified on the basis of the share of population in rural areas:

To resolve the distortion created by extremely small NUTS-3 regions, regions smaller than 500 km2 are combined for classification purposes with one or more of their neighbours.

In a third step, the size of the urban centres in the region is considered:

All predominantly urban regions are considered close to a city.

A predominantly rural or intermediate regions is considered remote if less than half of its residents can drive to the centre of a city of at least 50 000 inhabitants within 45 minutes. If more than half of the regions population can reach a city of at least 50 000, it is considered close to a city. For more details on the methodology please consult Regional Focus 01/2008. 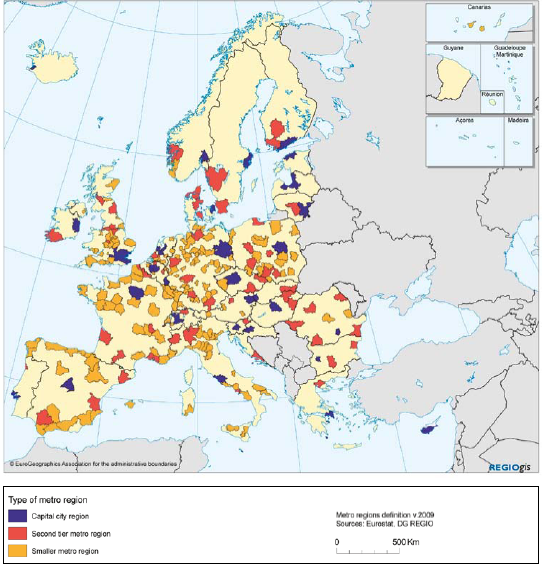 This typology was first presented in the Green Paper on Territorial Cohesionand subsequently in a Regional Focus by Dijkstra.They are approximations of the Larger Urban Zones (LUZs) as used in the Urban Audit.

The Commission is currently undertaking a review of the Urban Audit cities and their Larger Urban Zones with the goal of making them more comparable. This will be done on the basis of joint work with the OECD on a new metro area definition based on population grids and commuting data. This may result in some modifications to the LUZ and, subsequently perhaps, to its metro region as well.

The NUTS-3-based typology of metro regions contains groupings of NUTS-3 regions used as approximations of the main metropolitan areas.

The initial methodology for the selection of the NUTS-3 components of the metro regions is based on the Urban Audit definition of Larger Urban Zones (LUZ). These LUZs contain the major cities and their surrounding travel-to-work areas. LUZs are defined as groupings of existing administrative areas (often LAU2 units). Their boundaries do not necessarily coincide with those of NUTS-3 regions. Consequently, NUTS-3 regions in which at least 50% of the regional population lives inside a given LUZ were considered to be the components of the metro region related to that LUZ.

Hence, the quality of the territorial approximation depends on the average size of the NUTS-3 regions concerned.

In cooperation with the OECD, refined versions of the methodology are being tested, using population distribution at a fine level of disaggregation (1 km²) to identify the cores of the metro regions. Census-based local commuting data are then used to define contiguous areas around the cores, where substantial levels of commuting to these cores occur.

This approach has resulted in revised definitions of the extent of several metro regions. The typology distinguishes three types of metro regions:

The capital city region is the metro region which includes the national capital. 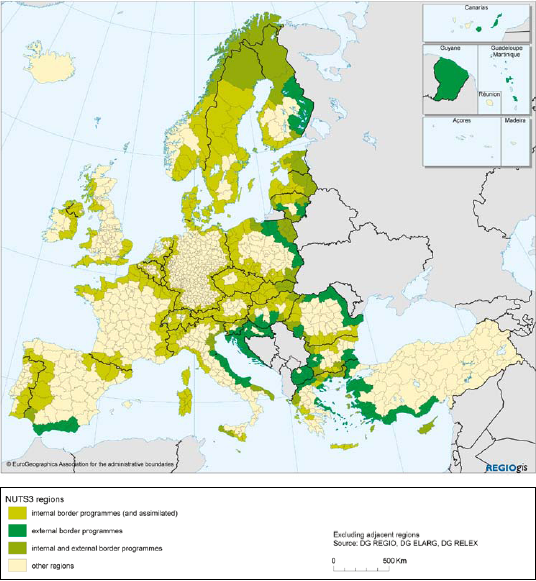 This classification is based on the 2007-2013 cross-border cooperation programmes. Compared to the previous Cohesion Policy period, the biggest differences are due to the accession of 12 Member States and the inclusion of a new type of border region: NUTS-3 regions along maritime borders separated by a maximum distance of 150 km.

The NUTS-3-based selection of border regions refers to the regions participating in the core areas of cross-border cooperation programmes in the programming period 2007-2013.

Two main types of border regions can be distinguished: 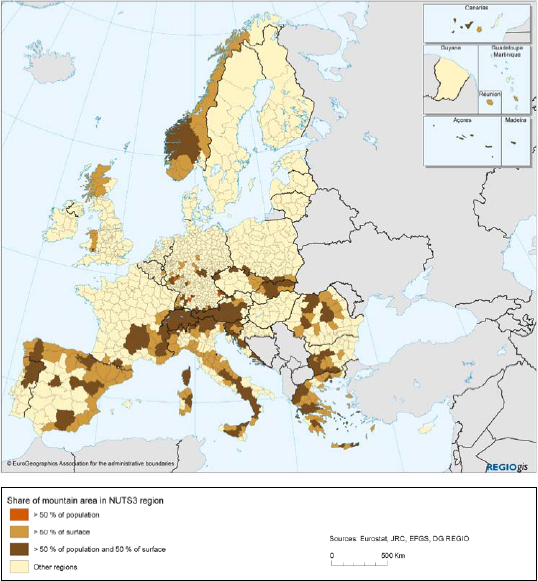 The first typology of mountain areas in Europe was developed by Nordregio[3]. The typology, used for analytical purposes, defined LAU2 units as ‘mountain municipalities’ if more than 50% of their surface was covered by selected topographic mountain areas (criteria: see Island regions, Methodology).

This classification is now stable.

Between 1000m and 1500m, areas had to justify one of two sets of criteria in order to be considered mountainous. The first of these is that the slope within a 3 km radius should exceed five degrees. If the slope is less steep than this, the area can still be considered mountainous if elevations encountered within a radius of 7 km vary by at least 300 metres. If neither of these two sets of criteria is met, the area is considered non-mountainous.

Between 300m and 1000m, only the latter of the two previous sets of criteria is applied. This means that only areas in which elevations encountered within a radius of 7 km vary by at least 300 metres are considered mountainous.

Below 300m, the objective was to identify areas with strong local contrasts in topography, such as Scottish and Norwegian fjords and Mediterranean coastal mountain areas. Selecting areas according to the standard deviation of elevations in the immediate vicinity of each appeared to be the best approach for the inclusion of these types of landscape. For each point of the digital elevation model, the standard deviation from the eight cardinal points surrounding it (North – North-East – East – South-East – South – South-West – West – North-West) was calculated. If this standard deviation is greater than 50 metres, the landscape is sufficiently undulating to be considered mountainous despite its low elevation. 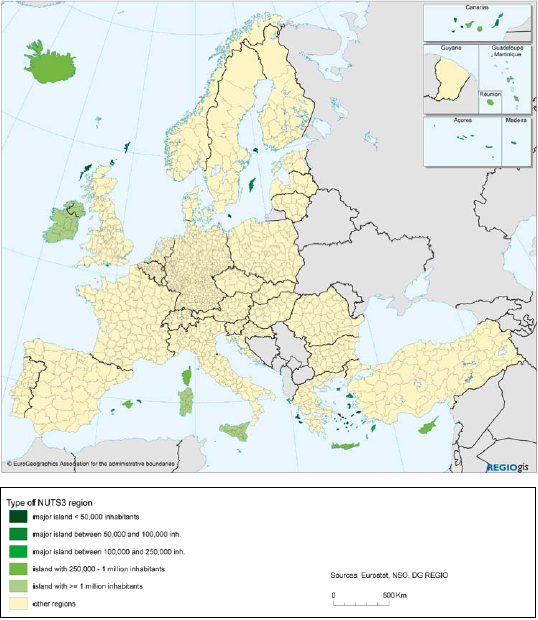 Islands were defined by a Eurostat publication study Portrait of the Island in 1994[4], which excluded islands with a national capital. This was subsequently used in a DG REGIO study to define island regions[5]. Within the EU-15 the only impact was to exclude Ireland and the UK (prior to the construction of the Channel Tunnel) as an ‘island’. To ensure access to annual data, a regional approximation of islands was made focusing on regions whose entire populations lived on an island. In all other NUTS-3 regions the share of population living on an island is well below 50 %[6]. This is the definition used in the Green Paper on Territorial Cohesion.

Ultimately, the methodology was modified for the 5th Cohesion Report to simplify and harmonise the definition. The criteria relating to the presence of a national capital and Cohesion Fund eligibility were both discarded. This classification is now stable.

In this context, islands are defined as territories having:

NUTS-3 island regions can correspond to a single island, or can be composed of several islands, or can be part of a bigger island containing several NUTS-3 regions.

The typology of NUTS-3 island regions distinguishes five categories, depending on the size of the major island related to the NUTS-3 region: 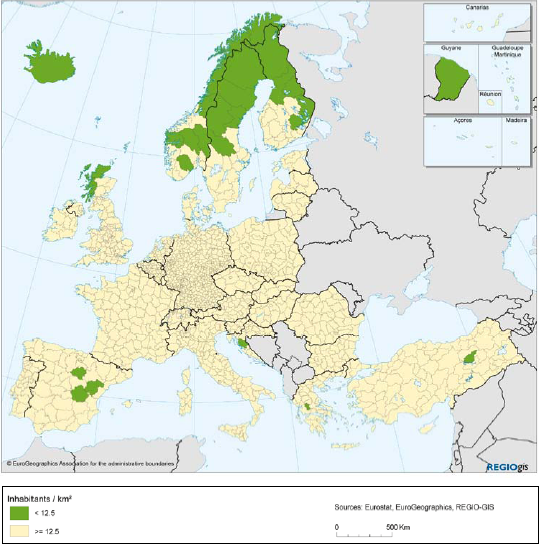 This definition has not changed during the current Cohesion Policy programming period.

As a result, sparsely-populated areas are defined as NUTS-3 regions with a population density of fewer than 12.5 inhabitants per km².