Since the beginning of 2018, countries which received the largest amounts of EU waste paper and plastic waste for recycling have changed significantly. 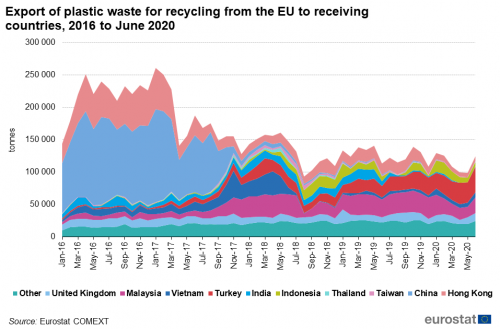 Export of plastic waste for recycling from the EU to receiving countries, 2016 to June 2020
Source: Eurostat COMEXT

This article presents indicators on the volume and price of recyclables in the European Union (EU). The purpose is to provide relevant data and to give a broader overview of the market for secondary materials. 'Secondary materials' are waste materials collected for recycling and recycled materials that can be used in manufacturing processes, either instead of or alongside ‘virgin’ raw materials.

These indicators consider the average monthly volume of trade in such secondary materials (thousand tonnes or million tonnes) and their average monthly prices (EUR/tonne). The analysis is based on international trade in goods statistics and monitors both trade between EU Member States (intra-EU) and between EU Member States and countries outside the EU (extra-EU), respectively. The price indicator is presented in a way similar to other market-price related indicators, such as energy import prices.

In contrast to the established markets for steel and aluminium scrap, observation of markets for waste from materials originally used for consumer-related packaging (such as glass, paper and paperboard and plastic) is less developed. Therefore, this analysis focuses on these materials. These indicators are relevant to stakeholders concerned with long-term performance of secondary-material markets, as well as to policy makers developing recycling strategies in the Circular Economy. Both elements, trade volumes and prices, are shown within the same graphs in order to highlight current trends and volatility.

The data for glass, paper and board, and plastic show that the prices of recyclables have varied significantly over time. The most notable change over the last decades was a sharp reduction in secondary material prices for paper and board, and plastic during the financial crisis of 2008/2009. However, average annual figures for trade within the European Union (EU) suggest that the markets for most secondary materials were not substantially affected.

The data also show that, for materials which are often exported out of the EU for recycling, the price recovered after the sharp drop seen throughout 2008. Extra-EU trade volumes in plastic, for example, dropped significantly for a few months in 2008/2009, but bounced back to levels higher than before 2008. The data also suggests that, since the beginning of 2018, the countries receiving waste materials for recycling from the EU changed significantly.

The following sub-sections present the price and trade volumes for glass, paper and board and plastic. The data and figures are updated regularly on the Eurostat dedicated website on waste statistics.

Annual averages of monthly prices and volumes for waste glass from 2004 to 2019 (the darker lines which remain constant over each year) are presented in Figure 1. From 2015 to June 2020, monthly data are also displayed (the lighter lines), highlighting the fluctuations in the price and volume data respectively. 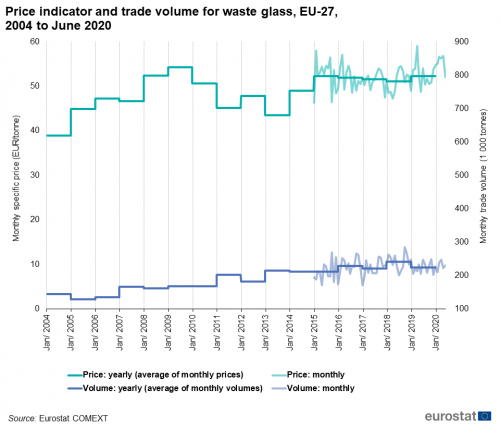 For both series (price and volume), annual averages of monthly prices and volumes for waste paper and board are shown from 2004 to 2019 (Figure 2). From 2015 to June 2020, the data is also displayed on a monthly basis to highlight fluctuations in the data (lighter coloured lines). 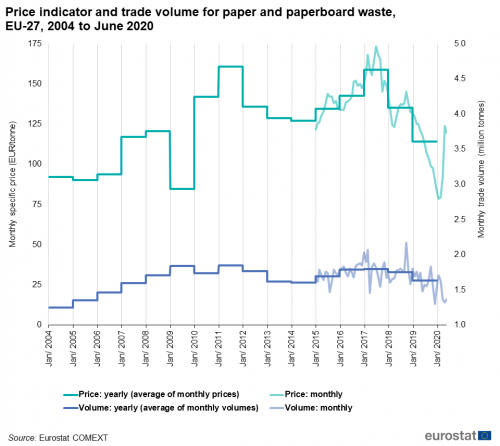 For both price and volume of waste plastic, annual averages of monthly prices and volumes are given from 2004 to 2019 (Figure 3). From 2015 to June 2020, data are also displayed on a monthly basis, highlighting fluctuations in the data over the year (lighter lines). 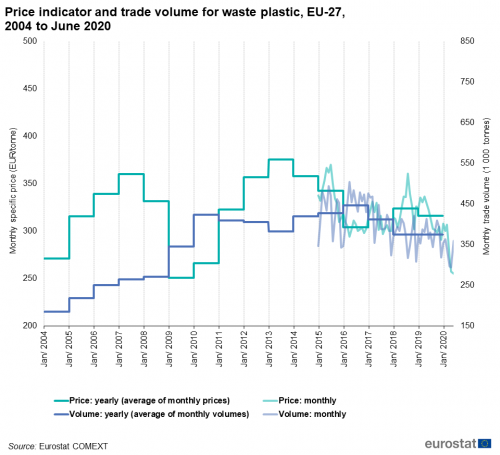 For paper and plastic, more than one international trade in goods statistics code is used for the calculation of the price indicator. The different codes describe secondary materials, which may include industrial residues of high quality or separately collected waste. Figure 4 illustrates the difference in price and the corresponding development over time. As an example, the trade positions of paper waste with the highest (code 47072000) and lowest (code 47079010) price were chosen. 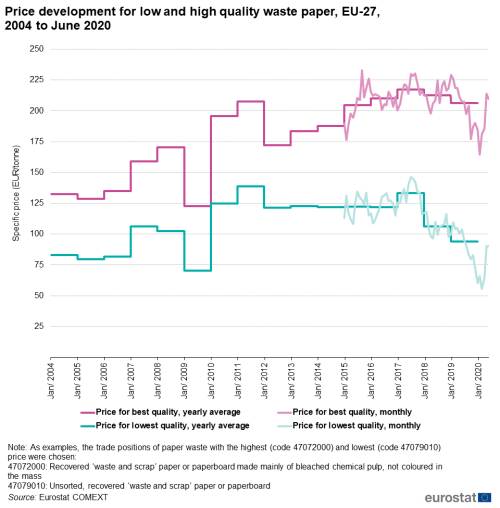 The difference in price between the lowest and highest quality of waste paper has remained fairly constant, with the prices for the two qualities developing roughly in parallel. The observation of trade volumes provides a similar picture. Therefore, it is reasonable to calculate only one price indicator for paper.

Trends in material prices and trade flows can give some additional information about the recycling economy.

Glass is a heavy and low-cost material. A consequence is that transport costs constitute a considerable share of the total costs when trading in waste glass. Hence, the trade volume is low in comparison with the overall recycling volume. In addition, most trade takes place between neighbouring countries, limiting the transport distances and transport costs, thus extra-EU export volumes are also low.

For paper and plastic, the data show a more complex picture. 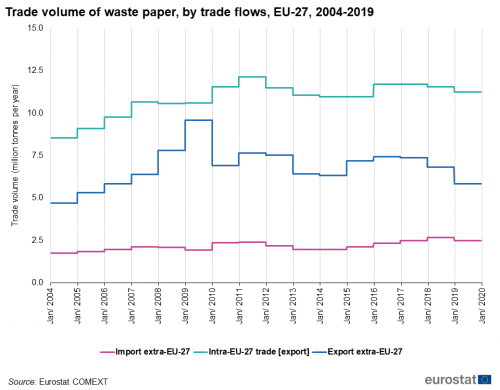 The price indicator for paper waste in the EU, by trade flow, is shown in Figure 6. The prices of all three categories show similar trends. Due to the inclusion of transport costs, import prices tend to be higher than export prices. 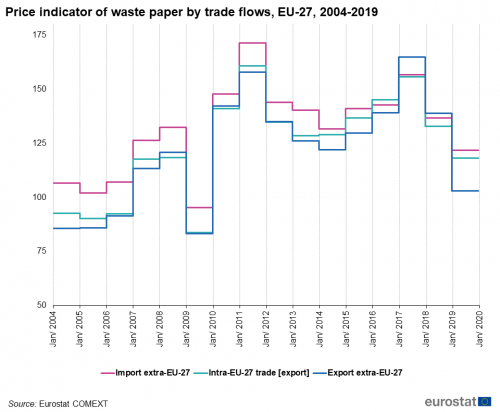 The developments of the trade flows for plastic waste is shown in Figure 7. The overall trend looks similar to that seen for paper waste in Figure 5. 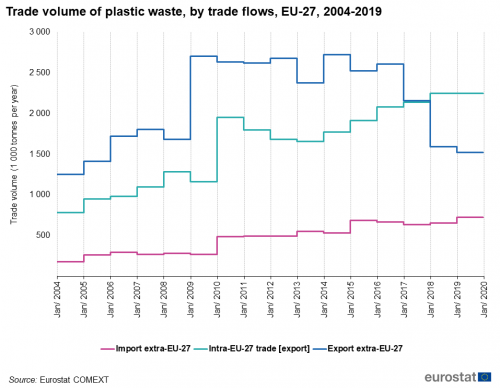 The development of the specific price of plastic waste by trade flow is shown in Figure 8. The trend is quite different from that of paper. The higher price seen in the intra-EU trade of plastic waste suggests that the quality of this material was higher than that imported to or exported from the EU. The price slumped for all three trade flows in 2009 and 2010, in connection with the international financial and economic crisis, but recovered from 2011 on. The announcement of China’s decision to stop importing plastic waste and a number of other solid waste categories from the end of 2017 led to a sharp fall in extra-EU export prices in 2016. In 2018, the price of extra-EU exports fell to 254 EUR/tonne, falling below the price of extra-EU imports (282 EUR/tonne) for the first time. By 2019, the extra-EU export price had fallen to 246 EUR/tonne, almost equalling the bottom level seen in 2009 (240 EUR/tonne) at the height of the economic crisis. 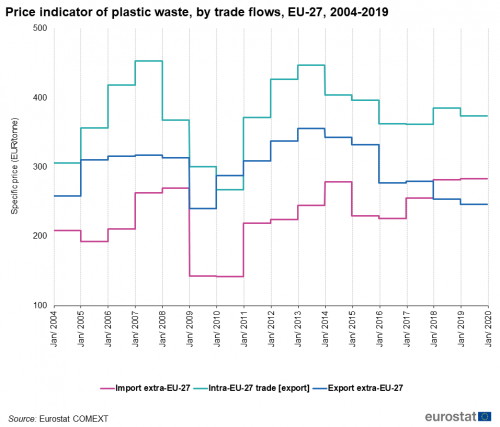 Policy changes on both sides, by the exporting countries as well as by the receiving countries, can lead to significant changes in the flows of material destined for recycling.

China filed a notification with the World Trade Organisation (WTO) that it intended to ban trade of four classes and 24 kinds of solid waste by the end of 2017, including all plastic scrap, unsorted waste paper, certain metal recycling residues, textiles and all unsorted waste or scrap. This ban has also led to a large drop in prices for recyclable goods, such as mixed paper.

In January 2017, China received 607 000 tonnes of paper for recycling from the EU. A year later, in January 2018, this had fallen to 137 000 tonnes, a decrease of more than three quarters (-77 %). As shown in Figure 9, the flows have shifted significantly towards Vietnam, Thailand, India and Indonesia, among others. 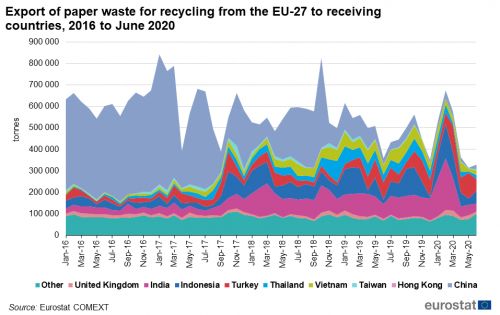 Figure 9: Export of paper waste for recycling from the EU-27 to receiving countries, 2016 to June 2020
Source: Eurostat COMEXT

Figure 10: Export of plastic waste for recycling from the EU to receiving countries, 2016 to June 2020
Source: Eurostat COMEXT

The presented trade figures allow valuable insights for the implementation of the European thematic strategies on resources and on waste prevention and recycling, including for the Circular Economy. Assessing the international trade in goods data with the same methodology by country of origin and destination would provide an even more detailed insight.

The European market has a big trade surplus and the intra-EU trade is developing well.

On 1 January 2018, China's import ban for certain waste material came into effect. As a result, EU exports have almost halved. The remaining exports have shifted to other countries.

Paper waste is reported in international trade in goods statistics under six codes (see Table 2). It reports three fractions of mostly industrial waste (47071000, 47072000, 47073090) and three fractions covering waste paper collected and sorted. As all fractions are covered by the Waste Statistics Regulation, we take all six codes into account for the indicator. 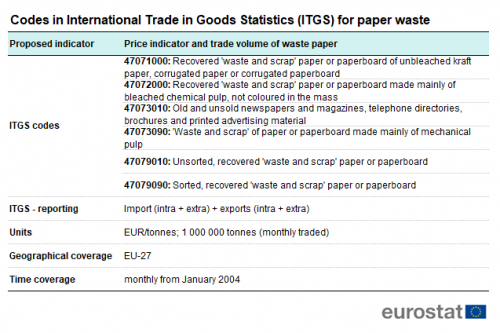 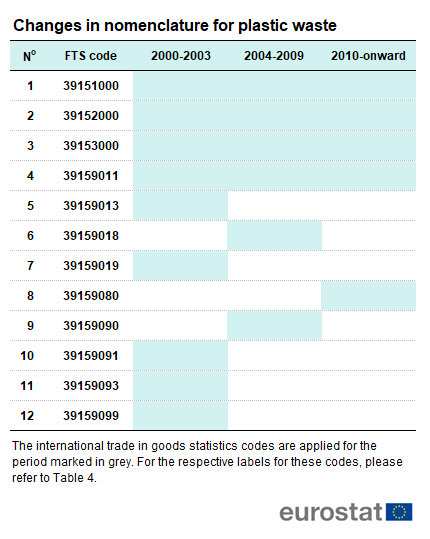 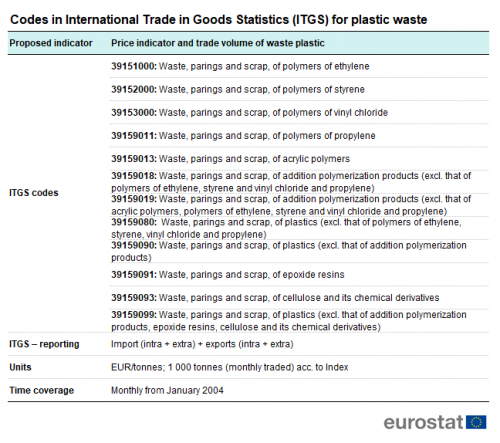 The price indicator sums up all value (in EUR) and volume (in tonnes) of all relevant international trade in goods codes. Value divided by volume gives the specific price indicator (in EUR/tonne)

Value and volume is extracted from international trade in goods statistics as intra-EU and extra-EU trade for both, import and export. The price indicator is shown as monthly data or yearly average data.

International trade in goods statistics are published monthly, with a delay of approximately 2.5 months.

All publications on waste issued by Eurostat.