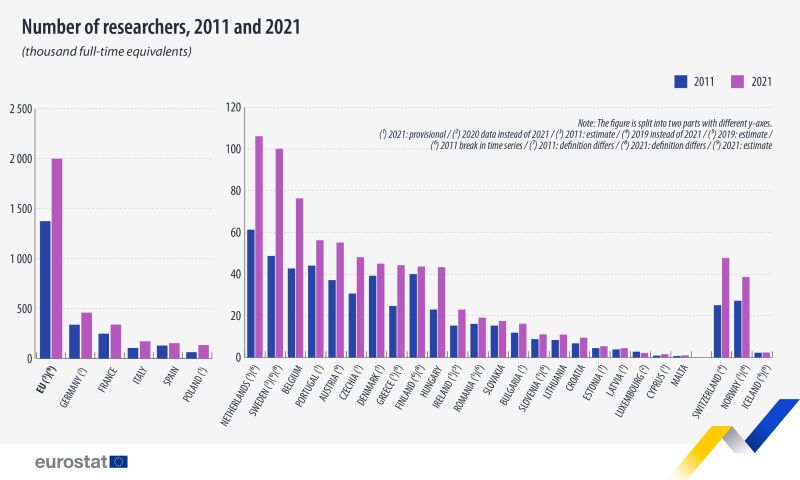 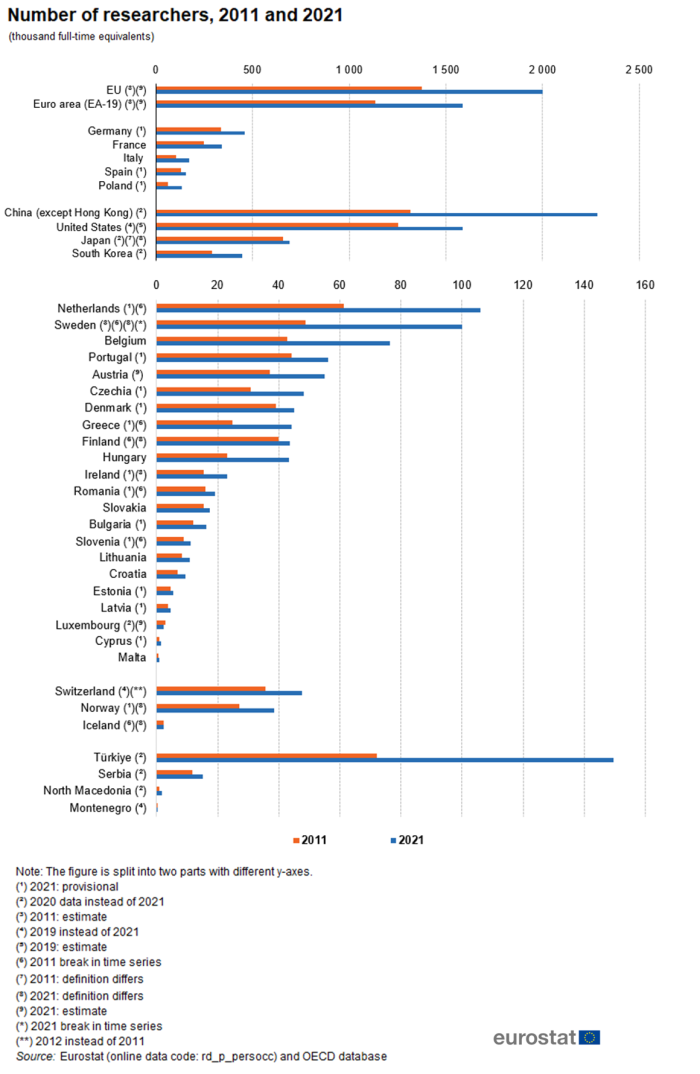 An analysis of R&D personnel[1] by sector in 2021 (see Figure 2) shows that in the EU there was a high concentration of researchers in the business enterprise sector (56.3 %) and the higher education sector (31.9 %), while 11.0 % of the total number of researchers were working in the government sector. The relative importance of the different sectors varied considerably across the EU Member States, with business sector accounting for three-fifths or more of all researchers in Sweden, the Netherlandfs, Belgium, Austria, Finland, France, Hungary and Germany. By contrast, the countries with the highest share of researchers working in the government sector were Romania (34.1 %), Bulgaria (29.1 %) and Croatia (22.5 %). A majority of researchers working in Latvia (60.2 %), Slovakia (54.5 %), Lithuania (53.8 %), Portugal and Ireland (both 51.4 %), Croatia (51.1 %), Malta (51.0 %) and Greece (50.4 %) were employed within the higher education sector. This sector also accounted for a high share (although less than 50 %) of all researchers in Cyprus, Estonia, Spain and Poland. In terms of its number of researchers, the private non-profit sector was the smallest in all EU Member States, its highest share (11.4 % of all researchers) was recorded in Cyprus, while the next highest share was in Italy (2.9 %). In the remaining 16 countries for which the data for this sector are available, it ranged between 0.0 % and 1.8 %. 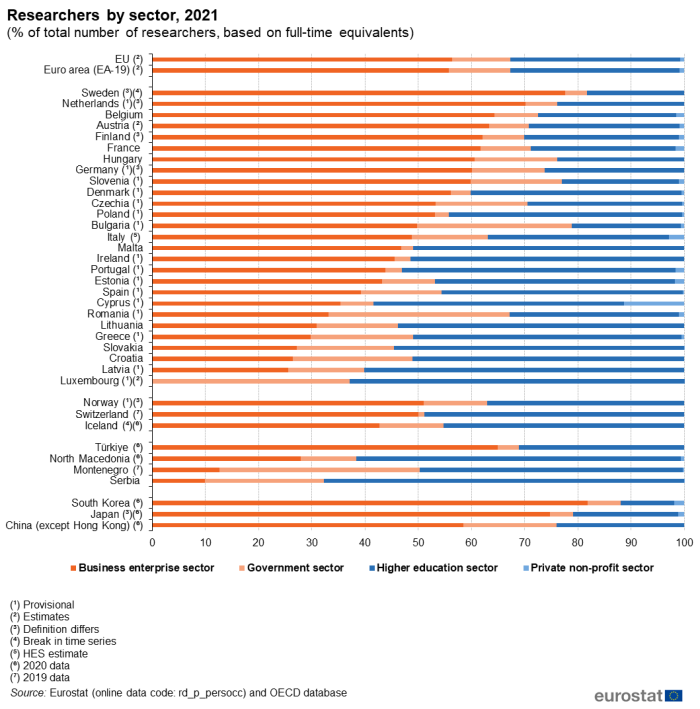 Figure 2: Researchers by sector, 2021 (% share of total number of researchers, based on full-time equivalents)
Source: Eurostat (rd_p_persocc) and OECD database

An analysis by sex shows that men accounted for approximately two-thirds (67.1 %) of the EU's workforce of researchers in 2019 (expressed in head count). Women accounted for just over half of the total number of researchers in 2019 only in one country: Latvia (where their share was just about a little over half with 50.6 %). The share of women in the total number of researchers was close to parity in Lithuania, Croatia, Romania and Bulgaria, all above 45 % (see Figure 3). The gender gap was the largest in France, Germany, the Netherlands, Luxembourg and Czechia where women were less than 30 % of all researchers.

Figure 3: Researchers by sex, 2019 (% share of total number of researchers, based on head count)
Source: Eurostat (rd_p_persocc) and OECD database

R&D personnel in all sectors together accounted for more than 2.0 % of the total employment in Belgium, Sweden, Finland, Denmark and Austria in 2021, compared with an EU average of 1.6 % (Note: these figures are based on information in full-time equivalents). Aside from the above countries mentioned, the share of R&D personnel in the total employment ranged from 0.4 % in Romania and 0.6 % in Cyprus to 1.9 % in the Netherlands and Germany (see Figure 4). 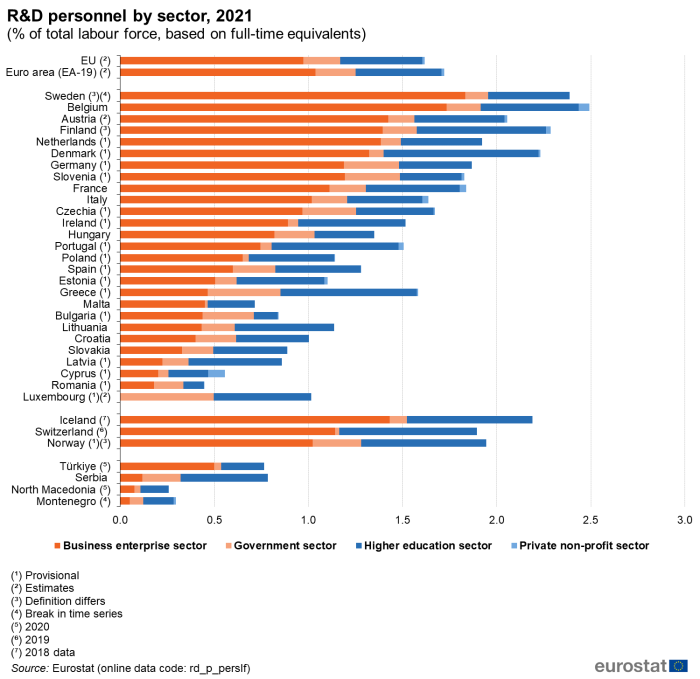 Human resources in science and technology

Although the letters S and T in the official definition of HRST in the Canberra manual refer to science and technology, the definition is not limited to science and technology in the strict sense. HRST by education covers all fields of study, in other words anybody who successfully completed a tertiary level education. The HRST 'core' (HRSTC) — which is made up of people who possess a tertiary level education and who are employed in science and technology occupations — amounted to 49.8 million persons in 2021 across the whole EU and accounted for one-fifth (23.4 %) of the total labour force. Concerning the HRST 'core', Romania, Italy (both 16.5 %) and Slovakia (18.2 %) were the EU Member States reporting the lowest figures of their labour force in that category in 2021. At the other end of the scale, HRSTC accounted for more than one-quarter of the labour force in Luxembourg (42.9 %), Sweden (32.1 %), Belgium (31.9 %), Slovenia (30.5 %), Finland (30.0 %), Ireland (29.6 %), Denmark (29.3 %) and the Netherlands (29.2 %) (see Figure 5). 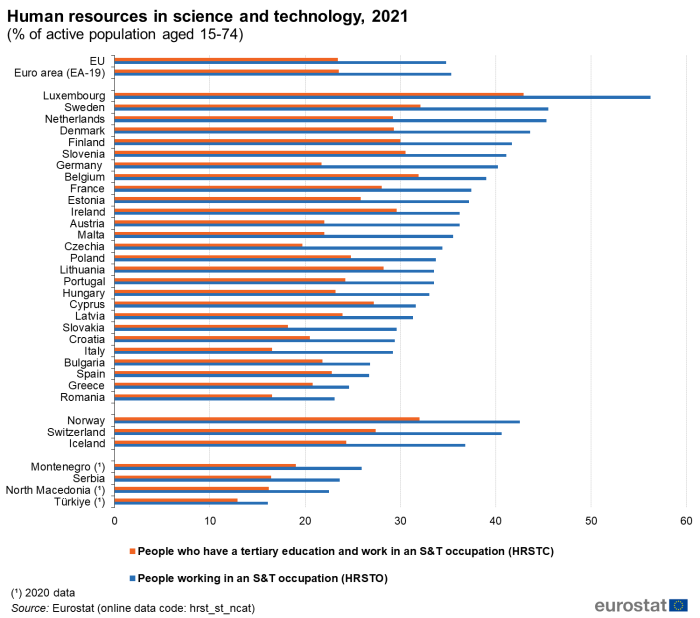 Between 2012 and 2021 there was a considerable increase in the relative importance of people classified as HRST ‘core’ within the EU's labour force, as their share rose by 5.2 percentage points (pp) (see Figure 6) from 18.2 % to 23.4 % in 2021. In fact, this share increased in all EU Member States. It must be noted that a break in series occurred in Luxembourg between the two observed periods. The largest increases in the relative importance of the HRST core workforce were recorded in Slovenia (11.5 pp), Portugal (10.5 pp), Austria (8.8 pp), Sweden (7.9 pp), the Netherlands (7.2 pp), Luxembourg and France (both 7.0 pp). 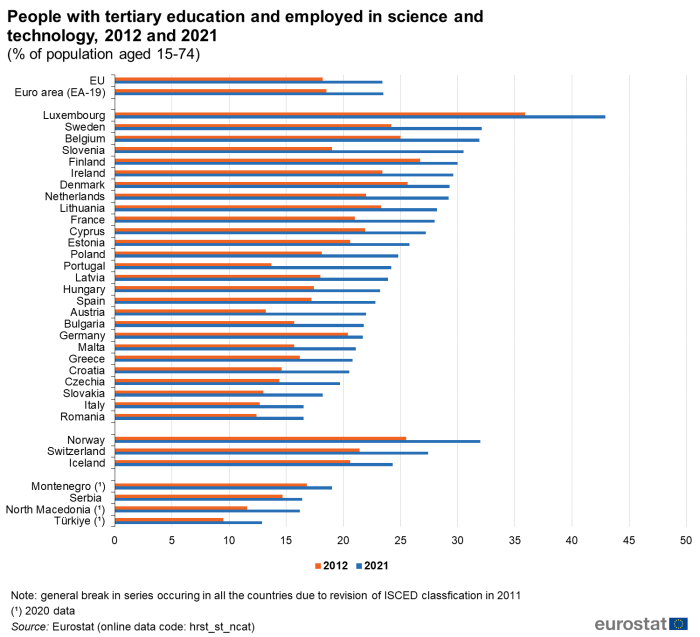 Figure 6: People who have a tertiary education and work in a science and technology occupation, 2012 and 2021 (% share of active population aged 15-74 years)
Source: Eurostat (hrst_st_ncat)

Moving away from the broad definitions of HRST, Figures 7 and 8 look at the international standard classification of education (ISCED) levels 5-8 (tertiary education) in the field of science and technology covering natural sciences, mathematics and statistics; information and communication technologies; engineering, manufacturing and construction. Within the EU (2020 data), there were 20.9 graduates of science and technology fields of education per 1 000 persons aged 20 to 29 years. Among the EU Member States (2020 data), relatively high ratios — above 20.0 graduates per 1 000 persons aged 20 to 29 years — were recorded in Ireland, France, Finland, Austria, Denmark, Hungary, Germany, Portugal, Spain, Croatia and Slovenia. In Ireland this ratio peaked at 39.9 graduates per 1 000 persons aged 20 to 29 years. This ratio should be interpreted with care as some graduates reported by a country may be foreigners who return home following their studies and so push up the ratio in the country where they studied and pull down the ratio for their country of origin. This may explain to a large extent the very low ratio recorded in one of the smallest EU Member States, namely Luxembourg (4.2 graduates from science and technology fields of education per 1 000 persons aged 20 to 29) and also the relatively low ratio recorded for Cyprus (9.8). 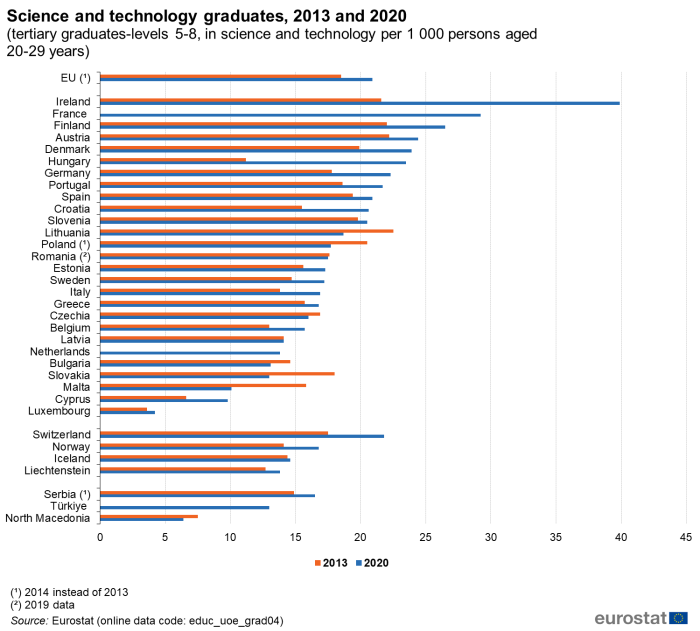 In relative terms, the broad group covering science and technology accounted for 39.6 % of the doctoral students in the EU in 2020.

Among the EU Member States, science and technology fields of education accounted for more than half of all doctoral students only in Luxembourg (60.8 %) and Italy (50.1 %). These fields were also very popular among students in France, Czechia, Estonia, Ireland, Lithuania, Sweden, Belgium, Germany and Croatia where the shares ranged between 40.0 % and 50.0 %.The lowest proportion of PhD students in S and T fields of education was recorded in Bulgaria (27.0 %), Malta (28.0 %) and the Netherlands (31.0 %). The other fields of education for doctoral studies in the EU ranked in terms of popularity were health, welfare and services (19.4 %), social science, business and law (19.3 %) education, arts and humanities (17.7 %), and agriculture and veterinary (2.7 %). 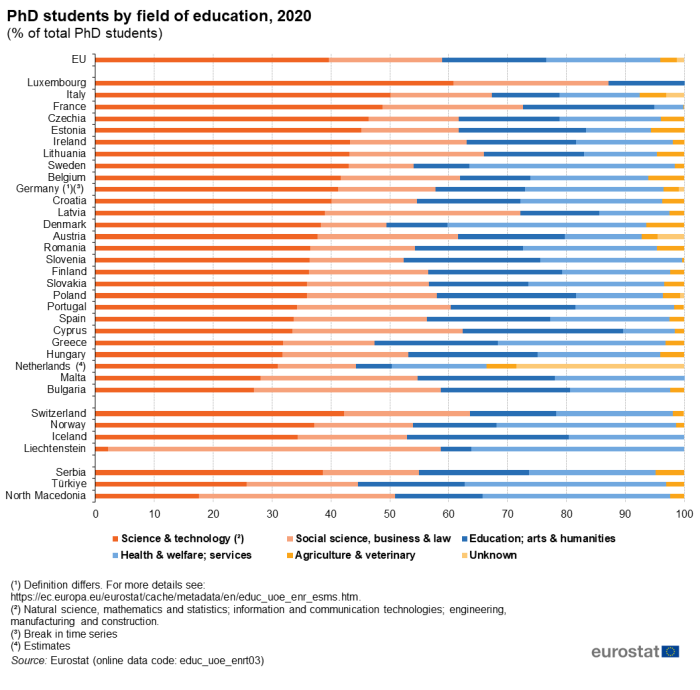 R&D personnel include all persons employed directly within R&D, as well as persons supplying direct services (such as managers, administrative staff and clerical staff). For statistical purposes, indicators on R&D personnel are compiled as both head counts (HC) and as full-time equivalents (FTEs).

Researchers are a subcategory of R&D personnel and are professionals engaged in the conception or creation of new knowledge, products, processes, methods and systems, and in the management of the projects concerned.

Statistics on human resources in science and technology (HRST) are compiled using guidelines laid out in the Canberra manual, prepared in cooperation between the OECD, European Commission, UNESCO and the International Labour Organisation (ILO) and published in 1995. HRST data can be analysed by sex, age, region, sector of activity, occupation, educational attainment and fields of education (although not all combinations are possible). Data relating to stocks of HRST provide information on the number of HRST at a particular point in time, these stock data relate to the employment status as well as the occupational and educational profiles of individuals.

HRST based on occupation (HRSTO) are persons who are employed in science and technology occupations as 'professionals' or 'technicians and associate professionals' within the international standard classification of occupations (ISCO-08).

Persons who fulfil both the education and the occupation criteria are classified as the HRST 'core' (HRSTC).

Indicators based on the number of doctoral (PhD) students give an idea of the extent to which countries will have researchers at the highest level of education in the future. The data relate to the number of students in the reference year, they do not refer to the number of new graduates or to the total number (stock) of graduates in the labour market that year. The number of doctoral students is measured as students enrolled in ISCED 2011 level 8: this level concerns tertiary programmes which lead to the award of an advanced research qualification. Programmes at this ISCED level are devoted to advanced study and original research and are typically offered only by research-oriented tertiary educational institutions such as universities. Doctoral programmes exist in both academic and professional fields.

The European Research Area (ERA) is composed of all research and development activities, programmes and policies in Europe which involve a transnational perspective. In May 2008, the European Commission adopted a Communication to launch an initiative titled, Better careers and more mobility: a European partnership for researchers (COM(2008) 317 final). The goal of this initiative is to improve the mobility of researchers and to enhance the diffusion of knowledge throughout Europe, by: balancing demand and supply for researchers at a European level, helping create centres of excellence and improving the skills of researchers in Europe.

With this in mind, the EU and its Member States set-up a pan-European initiative — EURAXESS: researchers in motion — which is designed to deliver information and support researcher mobility and career development, while enhancing scientific collaboration between Europe and the world. The same gateway is also used to promote the European Commission's initiative titled Science4Refugees, which is designed to help refugee researchers find jobs and to support refugee scientists in finding European researchers with whom they may discuss problems, find solutions and study together.

In December 2008, the Competitiveness Council adopted a definition for a 2020 vision for the ERA. According to the opening statement of this vision, all players should benefit from: the 'fifth freedom', introducing the free circulation of researchers, knowledge and technology across the ERA; attractive conditions for carrying out research and investing in R & D intensive sectors; Europe-wide scientific competition, together with the appropriate level of cooperation and coordination. This vision is part of the wider goals contained within the Europe 2020 strategy for smart, sustainable and inclusive growth.

In November 2011, the European Commission presented a successor for the 7th framework programme for research and technological development by announcing Horizon 2020, a programme for investing nearly EUR 80 billion in research and innovation, implementing the innovation union. The Marie Sklodowska-Curie actions, under the 'excellent science' pillar of Horizon 2020, aim to support the career development and training of researchers — with a focus on innovation skills — in all scientific disciplines through worldwide and cross-sector mobility.

Statistics on research and development (t_rd)