Quarterly registrations of new businesses and declarations of bankruptcies - statistics

In the second quarter of 2020, the seasonally adjusted number of business registrations was down by 20.4 % in the euro area and by 20.5 % in the EU, compared with the previous quarter. 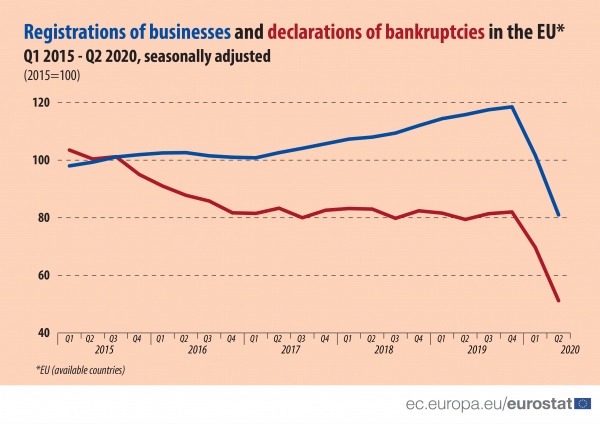 This article presents data on how many new businesses have been registered and the number of bankruptcy declarations in the euro area (EA) and in the European Union (EU) up until the second quarter of 2020. The data is based on the absolute number of registrations and bankruptcies sent to Eurostat, the statistical office of the European Union, on a voluntary basis by some EU and EFTA Member States. The tables provide a complete picture of the available data.

The statistics covered in this article are classified as experimental statistics. Currently, around twenty countries have contributed to the statistics, thus the EU and euro area coverage is not complete due to the voluntary nature of the data collection. In addition, the limited length of the current time series does not allow for the application of seasonal adjustment in full scale and some adjustment can be expected when a longer time series becomes available. Finally, metadata on this domain will only become complete with the implementation of the European Business Statistics (EBS) regulation in 2021. Any conclusions about the evolution of registrations of businesses and bankruptcy declarations in the EU Member States and euro area need to be made with caution.

Generally, the number of registrations of new businesses has increased in the EU and the euro area since 2015 until the end of 2019, and the trend was broken only in the first and second quarters of 2020 (Figure 1). As to the number of declarations of bankruptcies, there has been a clear downward trend in the last years (Figure 2). 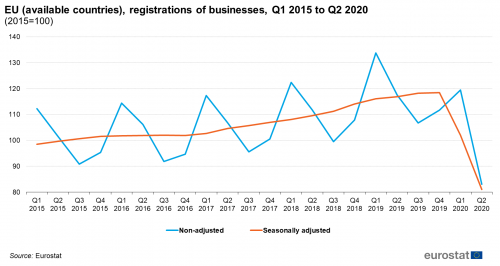 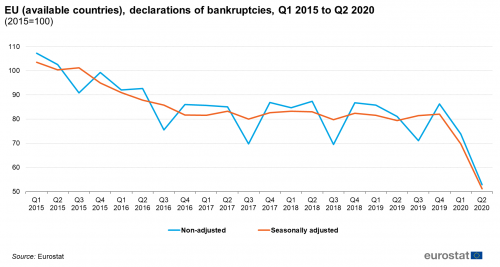 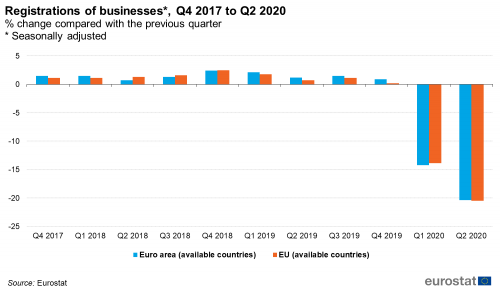 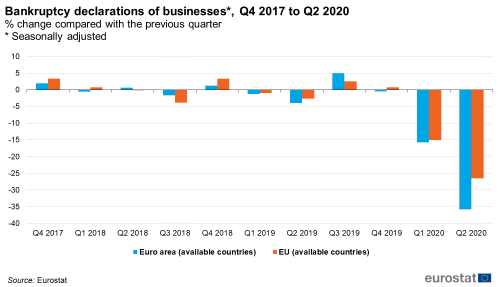 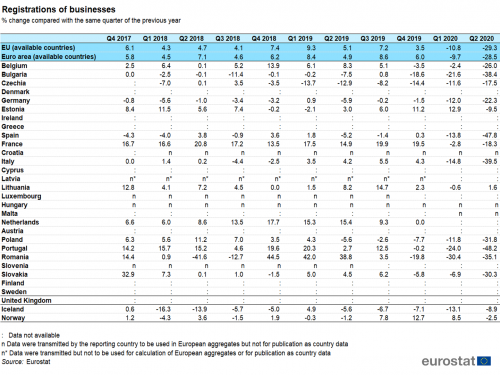 The number of bankruptcy declarations decreased sharply in the second quarter of 2020 compared with the same quarter of 2019, by 41.7 % in the euro area and 34.8 % in the EU. The largest decreases in the number of declarations of bankruptcies were found in Italy (-71.6 %), Belgium (-57.2 %) and France (-54.9 %). The number of bankruptcy declarations increased only in Poland (+19.8 %), Estonia (+14.7 %) and Portugal (+12.9 %) (Table 2). This may be explained by the fact that the respective administrations responsible for the registrations of bankruptcies were temporarily not accessible or closed and therefore these bankruptcies could not be reported immediately, but with a delay. Governments may also have allowed additional time for completing the administrative procedures. Finally, government measures supporting businesses during the crisis may have allowed businesses that would otherwise have filed for bankruptcy to continue their activities. 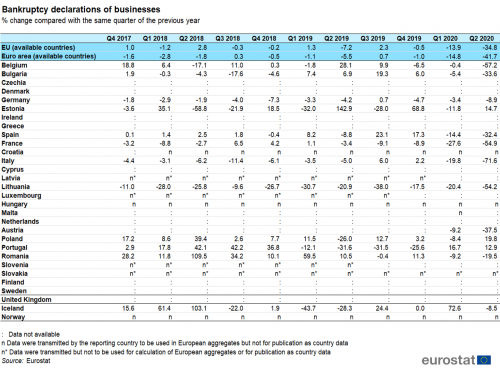 The current publication on quarterly registrations and bankruptcies is the first one published in the domain. Eurostat will continue publishing these data on a quarterly basis as experimental statistics until 2021 when quarterly registrations and bankruptcies will be covered by the EBS regulation as a mandatory data collection, with the first delivery of data in May 2021. This article will be updated when more recent data becomes available. The next publication covering Q3 of 2020 is expected in January 2021.

Registrations on new businesses: The number of entered legal units in the registration register at any time during the reference quarter Q, according to the respective administrative or legal procedure. Registrations is an early indicator to measure business intentions. In every country, administrative rules of registrations differ, so the quarterly data are presented as an index series to improve comparability.

Registrations cannot be directly compared with enterprise births. Registrations of businesses are part of administrative procedures, while annual data on enterprise births are based on the start-up of business activity in terms of having turnover, employment or investment. The registration of a legal unit can be considered as a declaration of intent but does not necessarily mean it continues as a business activity in line with annual business demography concept. Registration data are not based on the enterprise demography characteristics 'date of commencement of activities' but rather on the 'date of registration' that is not necessarily the same.

Bankruptcies: The number of legal units that have started the procedure of being declared bankrupt, by issuing a court declaration, at any time during the reference quarter Q (this declaration is often provisional and does not always mean cessation of an activity).

The bankruptcies indicator is an early sign to measure the sentiment in business environment. Quarterly statistics on bankruptcies are frequently different from annual business demography statistics on deaths of enterprises, because they cover deaths of enterprises due to bankruptcies, as well as other reasons. Bankruptcies that were filed do not necessarily mean closing of the business. Even if an enterprise has declared bankruptcy, it does not always mean that it ceases all activity when it enters into bankruptcy procedure. In order to be recorded as an enterprise death in annual business demography typically all production factors have been dissolved.

There are several methodological differences between the concepts of bankruptcies and enterprise deaths. Quarterly business demography data on bankruptcies are based on legal units, while annual business demography data on deaths is based on the statistical unit enterprise. Moreover, in some countries self-employed persons are rarely subject to bankruptcy procedure. There may also be significant differences between countries with respect to bankruptcy laws. In some countries, when a business declares itself bankrupt, it means that it has to cease immediately all activities whereas in other countries, they can continue to trade under a certain operation control. Some businesses declaring themselves bankrupt may therefore eventually recover, and would therefore not be considered as an enterprise death. The proportion of bankruptcy procedures that finally end up as an enterprise death varies therefore across countries depending on the bankruptcy laws. In addition, minimum thresholds of e.g. turnover may apply to annual business demography data, but not necessarily to quarterly data on bankruptcies.

To conclude, the scope and contents of annual business demography statistics on deaths of enterprises may differ considerably from quarterly data on bankruptcies and the levels of these two statistics may therefore vary considerably. In general, bankruptcies represent only a fraction of all enterprise deaths; they cannot be directly compared with annual business demography data on deaths of enterprises.

Respective strengths of quarterly and annual data: The quarterly data on registrations and bankruptcies reflect the intention of a business to start economic activities or to close down activities. The annual data reflect the economic reality in terms of enterprises having turnover, employment or investment (births) or the dissolution of them (deaths).

Calculation of indexes and EU aggregates

The available national indices are calculated by dividing the absolute figures of each period by the average of the base year (2015). National absolute figures are not directly aggregated because of different legislations, administrative practices and economic structures of the Member States.

Some countries asked for their data not to be used for the estimation of the European aggregates due to the evolving national methodology of registering bankruptcy declarations.

The EU aggregates are calculated by weighting the national indices by the number of active enterprises, taken from structural business statistics of the reference year 2015. Even if the data of many EU countries are still missing, the estimates of the European aggregates are nevertheless based on more than 75 % of the total Europe (in terms of weights). Missing data of the countries that have provided data at least for the period 2015 – 2019 have been estimated using an ARIMA forecast in JDemetra+ software v. 2.2.2. Countries that have not provided data for the year 2015 have been excluded from the EU aggregates.

Monitoring registrations and bankruptcies on a quarterly basis is useful as it provides more up to date and frequent information on the economic environment for businesses than the traditional annual business demography statistics, and in particular in 2020, on the effects of the COVID-19 pandemic. This is particularly important for policy makers when responses are needed due to business cycle developments, especially in the current context.

The data on the absolute number of registrations of new businesses and bankruptcies on quarterly basis were provided by the national statistical institutes of the EU and EFTA Member States, on a voluntary basis. In accordance with the provisions of the Regulation (EU) No 2019/2152 on European business statistics, quarterly data will be compiled by EU and EFTA countries on a mandatory basis starting from the first quarter of 2021. In the current context of the COVID-19 crisis, the European Statistical System Committee agreed to make efforts to anticipate the provision of the quarterly data on registrations and bankruptcies. It is therefore expected that the geographical coverage will progressively improve in the short run and before the formal entry into force of the new data requirements.