Purchasing power parities in Europe and the world

This article presents a summary of the results of the latest (2017) round of the International Comparison Program (ICP). The ICP is a worldwide statistical partnership to collect comparative price data and compile detailed expenditure values of countries’ gross domestic product (GDP), and to estimate purchasing power parities (PPPs) of the world’s economies. Using PPPs instead of market exchange rates to convert currencies makes it possible to compare the output of economies and the material welfare of their inhabitants in real terms (that is, controlling for differences in price levels). In total, 176 countries participated fully in the 2017 round of the ICP. The complete results can be found on the World Bank International Comparison Program website. Eurostat is a partner in the ICP and provides the required data for the 27 EU Member States, the United Kingdom, three EFTA Member States, five candidate countries and one potential candidate country. In addition, Eurostat supported the participation of Georgia and Ukraine in the ICP. This article focuses on the position of the EU-27 in the world. The positions of individual European countries within the EU can be found here. The previous ICP round was conducted for reference year 2011. The next ICP round will be conducted for reference year 2021 and results are expected to be published by the end of 2023.

In 2017, the gross domestic product (GDP) of the EU-27 represented 16.0% of the world's GDP, expressed in purchasing power standards (PPS). China and the United States were the two largest economies, with shares of 16.4% and 16.3% respectively. India was the fourth biggest economy, with 6.7%, followed by Japan with 4.3%. Figure 1 shows the shares of all countries (outside the EU) that have a share larger than 1%. For comparison: Germany is the largest EU country with a share in world GDP of 3.7%.

GDP and actual individual consumption (AIC) per capita in PPS

Table 1 shows indices of GDP and actual individual consumption (AIC) per capita in PPS, with EU-27=100, for a selection of countries. All countries that are included in Figure 1 are included in Table 1, plus those countries in the world and in the EU-27 that score highest or lowest on either indicator. While GDP per capita is mainly an indicator of the level of economic activity, AIC per capita is an alternative indicator better adapted to describe the material welfare of households. AIC consists of goods and services actually consumed by individuals, irrespective of whether these goods and services are purchased and paid for by households, by government, or by non-profit organisations. 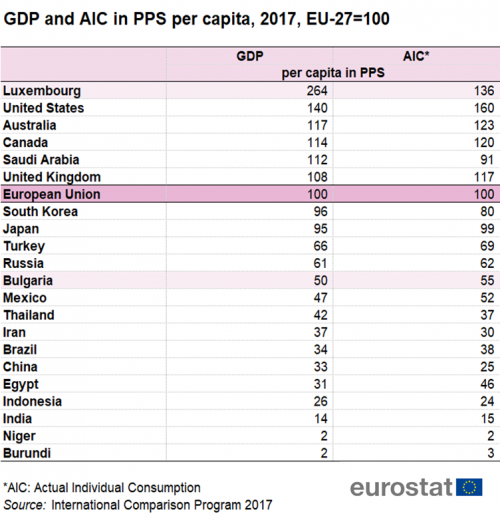 Table 2 shows price level indices (PLIs) for GDP and AIC for a selection of countries. Again, the countries of Figure 1 are included plus those countries in the world and in the EU-27 that have the highest or lowest indices for either indicator. A PLI above 100 indicates that the price level for the respective country is above the average price level of the EU-27, and vice versa for a PLI below 100. The table shows that, generally, no large differences between the PLIs for GDP and AIC exist. The country with the highest PLIs in the world, for both GDP and AIC, is Bermuda. Denmark has the highest PLIs among the EU Member States for both indicators. The difference between the highest and lowest PLIs in the world (found in Egypt) is about 8 times, whereas this gap within the EU-27 is about 3 times. Brazil's PLIs are nearly twice as high as those of Bulgaria, the country with the lowest price levels in the EU. 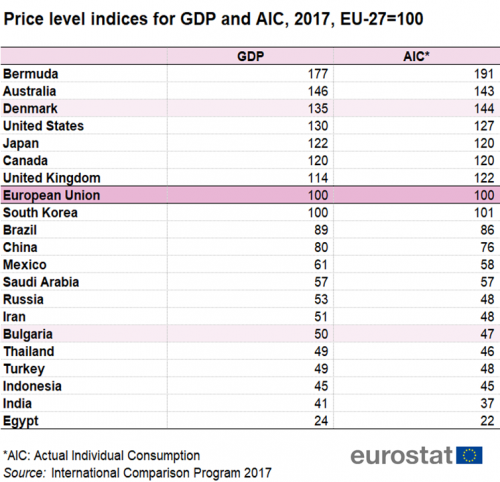 Results published in 2014 for the previous ICP round with reference year 2011 have been revised using updated 2011 expenditures, population, and exchange rate data. The ICP is primarily designed to compare levels of economic activity across economies expressed in a common currency in a particular reference year. However, given that the methodology for the 2011 and 2017 cycles was kept largely the same, and the set of economies participating in each cycle differed only slightly, it is possible to compare the results from the two years with some caution.

Below some data highlighted from the ICP reference year 2011. For more information, see the World Bank International Comparison Program website. The World Bank has also produced and published PPP results for the years 2012 to 2016 that are consistent with the revised 2011 and new 2017 results.

The data in this article are produced by the International Comparison Program (ICP). The ICP is a worldwide statistical operation involving some 200 countries. It produces internationally comparable price and volume measures for gross domestic product (GDP) and its component expenditures. The measures are based on purchasing power parities (PPPs). To calculate the PPPs, the ICP holds surveys to collect price and expenditure data for the whole range of final goods and services that comprise GDP including consumer goods and services, government services and capital goods. The full methodology used by the ICP is described on its website.

PPPs are both currency converters and spatial price deflators. They are used to, for example, better compare the GDPs of different countries. Initially, the GDPs are not comparable because they are expressed in national currencies and valued at national price levels. But, after PPPs are applied, the GDPs are converted to a common currency (called "Purchasing Power Standards" (PPS), if the EU-27 is used as reference as in this article) and are revalued at a uniform price level. As a result, differences between the GDPs reflect only differences in the volumes of final goods and services purchased.

Price level indices (PLIs) as presented in this publication are the ratios of PPPs to exchange rates. They provide a measure of the differences in price levels between countries by indicating for a given product group the number of units of common currency needed to buy the same volume of the product group or aggregate in each country. They are presented relative to the average of the EU-27.

The ICP is organised by region. There are six regions of which all but one are overseen by the ICP Global Office at the World Bank. The remaining region is covered by the Eurostat-OECD PPP Program. Eurostat provides the required data for 37 European countries and OECD for 12 non-European countries. This program has a different timetable to that of the ICP but employs compatible methodology. Eurostat and the OECD work closely with the Global Office to ensure that their 49 countries can be combined in a single comparison with the countries of other regions.

Responsibility for the ICP within regions is shared between national and regional agencies. National statistical offices carry out data collection. Regional agencies provide guidance and coordinate data collection and data validation. They also put together and finalise the regional comparisons. Responsibility for ensuring that the regional comparisons can be combined in a world comparison and then combining them rests with the Global Office.

The indices presented in this article are not intended to rank countries strictly. In fact, they only provide an indication of the order of magnitude of the volume or price level in one country in relation to others, particularly when countries are clustered around a very narrow range of outcomes. The level of uncertainty associated with the basic price and national accounts data, and the methods used for compiling PPPs imply that differences between countries that have indices within a close range should not be over-interpreted.

The main users of the global PPPs produced by the ICP are international organisations and regional agencies. For example, PPPs are used in the monitoring of the Sustainable Development goals, specifically the goals related to global poverty. The IMF and the World Bank use PPPs in their formula to determine member countries' quota (representing voting rights and countries' financial contributions). In the European Union, PPPs are instrumental to decide on regions' eligibility for structural funds.

There is, however, also a large demand for PPPs from a variety of users at the national level: government agencies, universities, research institutes, public enterprises, private firms, banks, journalists and individuals.