This article looks at the impact of demographic ageing within the European Union (EU), which is likely to be of major significance in the coming decades. Consistently low birth rates and higher life expectancy are transforming the shape of the EU’s age pyramid; probably the most important change will be the marked transition towards a much older population structure, a development which is already apparent in several EU Member States.

As a result, the proportion of people of working age in the EU is shrinking while the relative number of those retired is expanding. The share of older people in the total population will increase significantly in the coming decades. This will, in turn, lead to an increased burden on those of working age to provide for the social expenditure required by the ageing population for a range of related services. 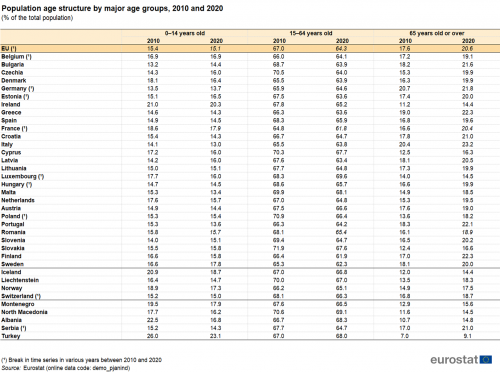 The population structure of the EFTA and candidate countries was similar to that generally observed in the EU, the main exceptions being Iceland and Turkey (where the population structure was similar to that of Ireland): in these two countries, the proportion of the youngest age group was high (18.7 %, and 23.1 %, respectively) and people aged 65 and above accounted for a comparatively low share of the total population (14.4 % and 9.1 %, respectively). Albania, North Macedonia and Montenegro also had a relatively low share of people aged 65 and above (around 15 %). Nevertheless, the trend of an ageing population is also visible in these countries (see Figure 1). 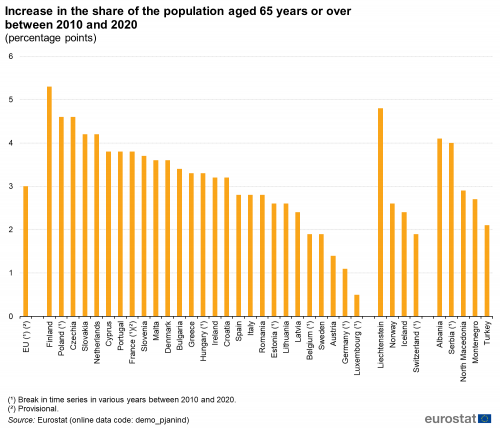 Figure 1: Increase in the share of the population aged 65 years or over between 2010 and 2020
(percentage points)
Source: Eurostat (demo_pjanind)

Median age is highest in Italy

The median age of the EU’s population is increasing and was 43.9 years on 1 January 2020 (see Figure 2). This means that half of the EU’s population was older than 43.9 years, while the other half was younger. Across the EU Member States the median age ranged between 37.7 years in Cyprus and 47.2 years in Italy, confirming the relatively young and relatively old population structures recorded in each of these Member States. The median age recorded in the EFTA and candidate countries in 2020 was lower than the EU figure, except for Liechtenstein (44.4 years ) and Serbia (43.9 years, equal to the EU). 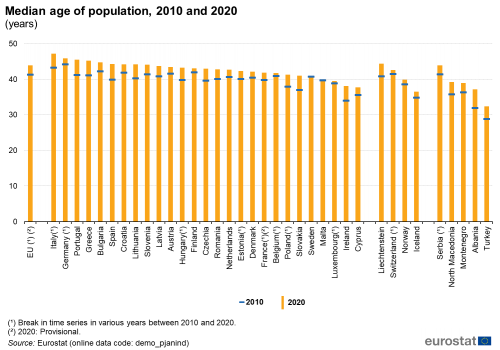 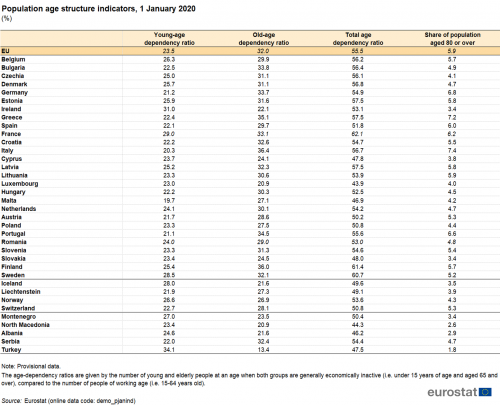 Past and future population ageing trends in the EU

Population ageing is a long-term trend which began several decades ago in Europe. This trend is visible in the transformations of the age structure of the population and is reflected in an increasing share of older people coupled with a declining share of working-age people in the total population. 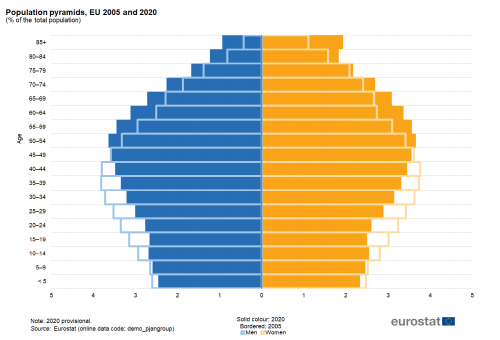 The growth in the relative share of older people may be explained by increased longevity, a pattern that has been apparent for several decades as life expectancy has risen (see mortality and life expectancy statistics); this development is often referred to as ‘ageing at the top’ of the population pyramid.

However, consistently low levels of fertility over many years have contributed to population ageing, with fewer births leading to a decline in the proportion of young people in the total population (see fertility statistics). This process is known as ‘ageing at the bottom’ of the population pyramid, and can be observed in the narrowing base of the EU population pyramids between 2005 and 2020.

In an attempt to look at future trends for population ageing, Eurostat’s latest set of population projections were made covering the period from 2020 to 2100. The EU’s population is projected to increase to a peak of 449.3 million around 2026 and thereafter gradually decline to 416.1 million by 2100.

The comparison of age pyramids for 2020 and 2100 (see Figure 4) shows that the EU’s population is projected to continue to age. In the coming decades, the number of elderly people will increase significantly. By 2100, the pyramid will take more the shape of a block, narrowing considerably in the middle of the pyramid (around the age 45–54 years). 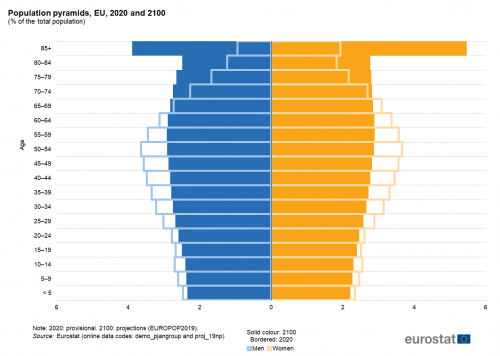 Another aspect of population ageing is the progressive ageing of the older population itself, as the relative significance of the very old is growing at a faster pace than any other age segment of the EU's population. The share of those aged 80 years or above in the EU’s population is projected to have a two and a half fold increase between 2020 and 2100, from 5.9 % to 14.6 % (see Figure 5). 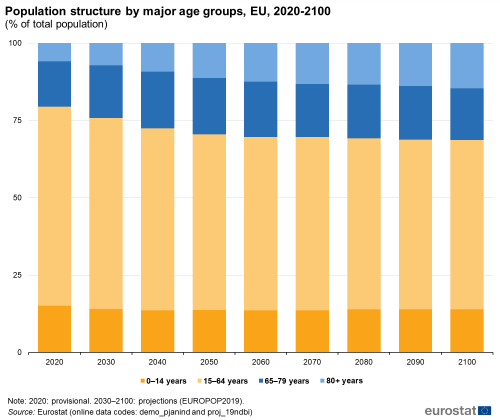 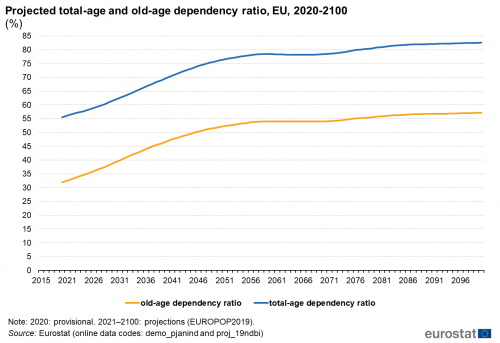 Eurostat collects data from EU Member States and other countries participating in its demography data collection exercise in relation to populations as of 1 January each year. The recommended definition is the ‘usual resident population’ and represents the number of inhabitants of a given area on 1 January of the year in question (or, in some cases, on 31 December of the previous year). In accordance with the United Nations international recommendations, the definition of the ‘usual residence’ is based on a 12 month reference period, in other words, those included should have lived in their place of usual residence for a continuous period of at least 12 months before the reference date, or arrived in their place of usual residence during the 12 months before the reference date with the intention of staying there for at least one year. However, countries may report to Eurostat population figures based on data from their most recent census, adjusted by the components of population change that have been produced since the last census, or alternatively population figures that are based on the registered/legal population.

Eurostat produces population projections at a national level every three years. These projections are what-if scenarios that aim to provide information about the likely future size and age structure of the population based on assumptions of future trends in fertility, life expectancy and migration.

Eurostat’s population projections are used by the European Commission to analyse the likely impact of ageing populations on public spending. Increased social expenditure related to population ageing, in the form of pensions, healthcare and institutional or private (health)care, is likely to result in a higher burden for the working-age population.

A number of important policies, notably in social and economic fields, use demographic data for planning actions, monitoring and evaluation programmes — for example, population ageing and its likely effects on the sustainability of public finances and welfare provisions, or the economic and social impact of demographic change.