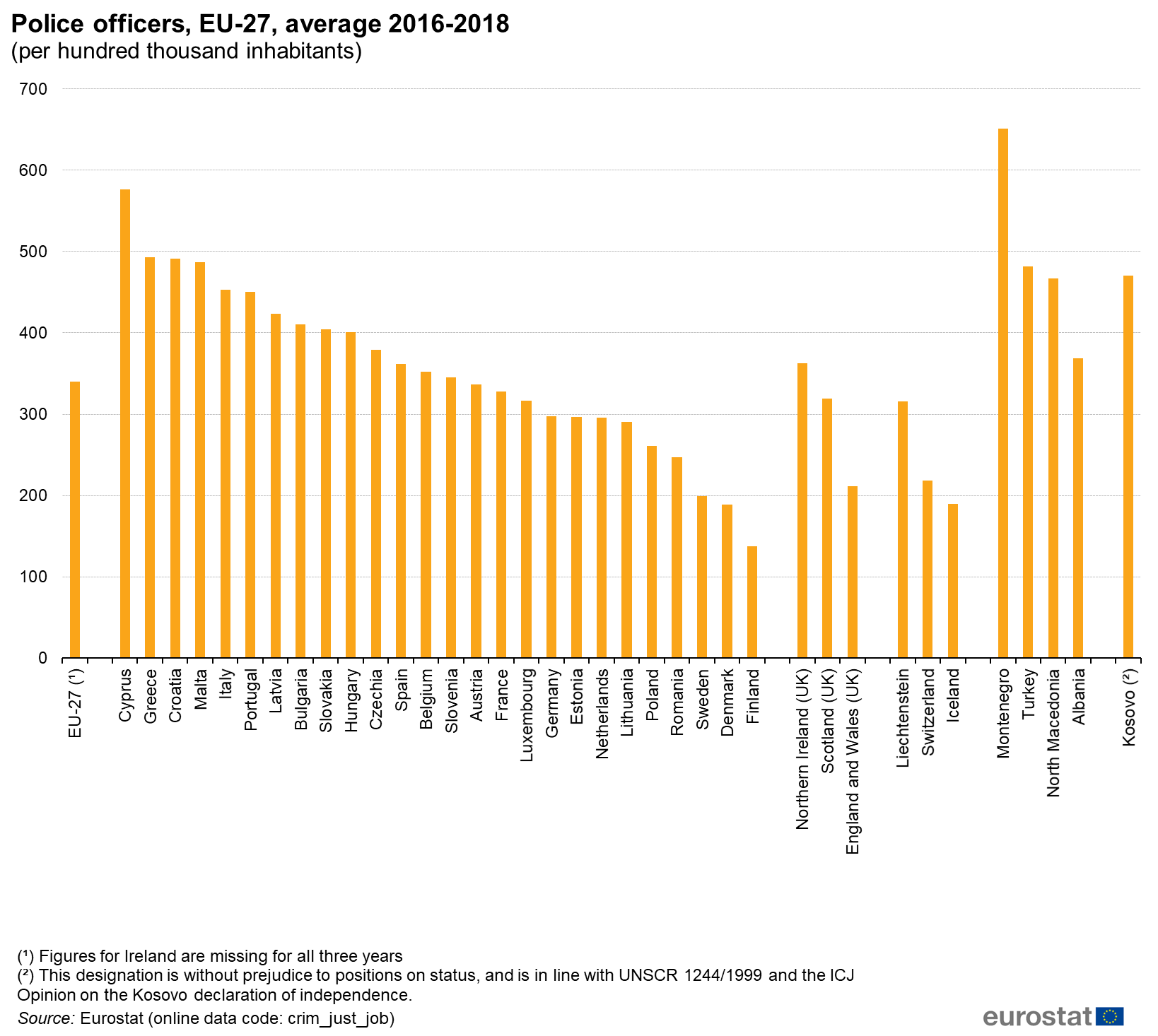 This article presents personnel statistics for police, courts, and prisons in Europe, including the number of employees and the proportion of women. Most results are from the period 2008 to 2018.

The results cover the European Union (EU), the United Kingdom, as well as partially the EFTA countries, the candidate countries and the potential candidate countries. Official figures are provided by national police, courts, and prison administrations.

One police officer per 294 people

One in six police officers is a woman 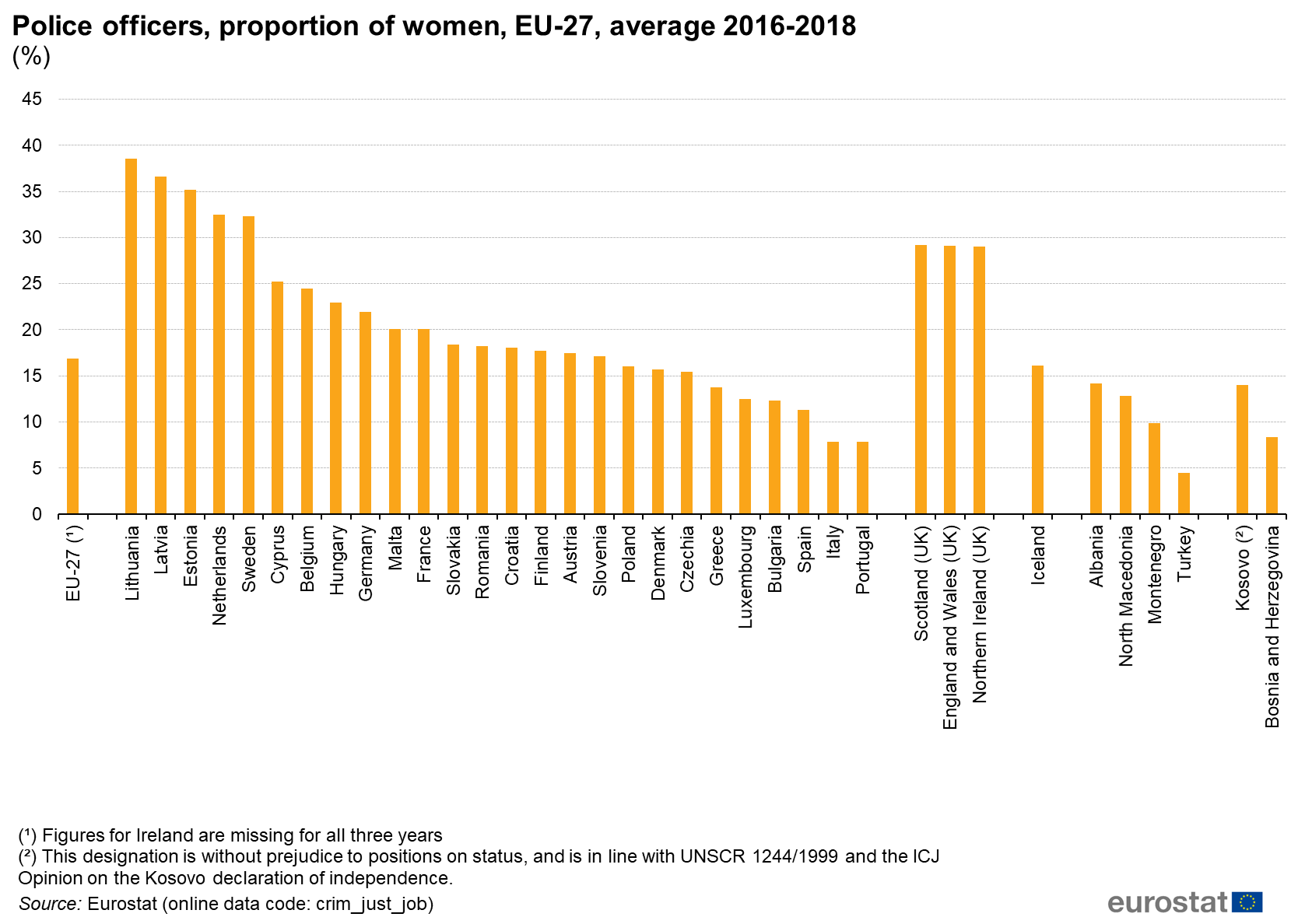 About 1.52 million police officers in the EU-27 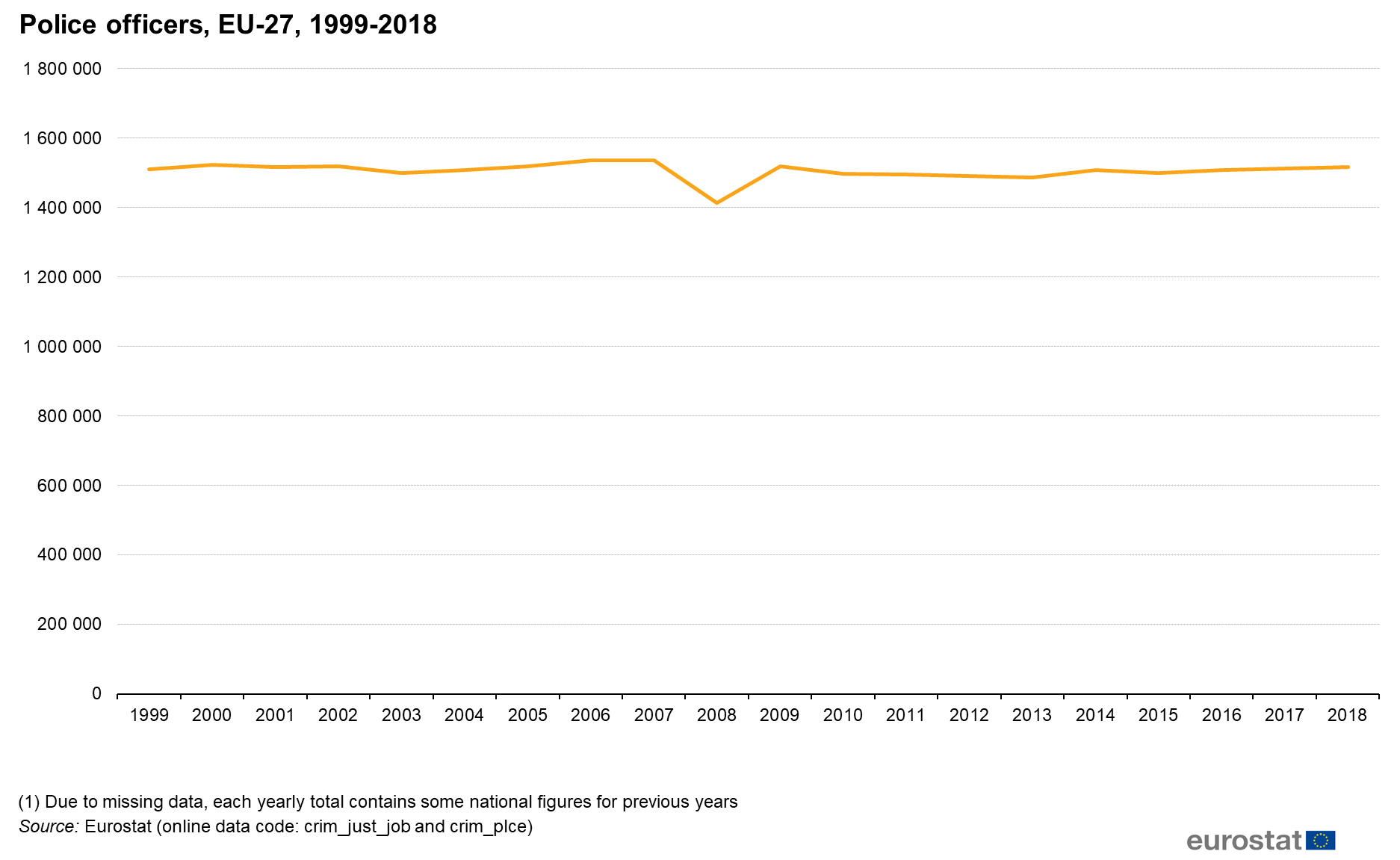 In 21 EU Member States, more than half of professional judges are women

In most EU Member States, more than 50 % of professional judges are women. Seventeen EU Member States had an increase in the proportion of women judges, as measured between average 2009-2013 and average 2014-2018[4]. All countries without any increase had more than 50 % of women judges already (see Figure 4 for more details). Note that the percentage of women may differ between type of judge and type of court, which in turn depends on the national justice system. Austria and Belgium had the most equal shares of women and men, both having 51 % (average 2014-2018) women. 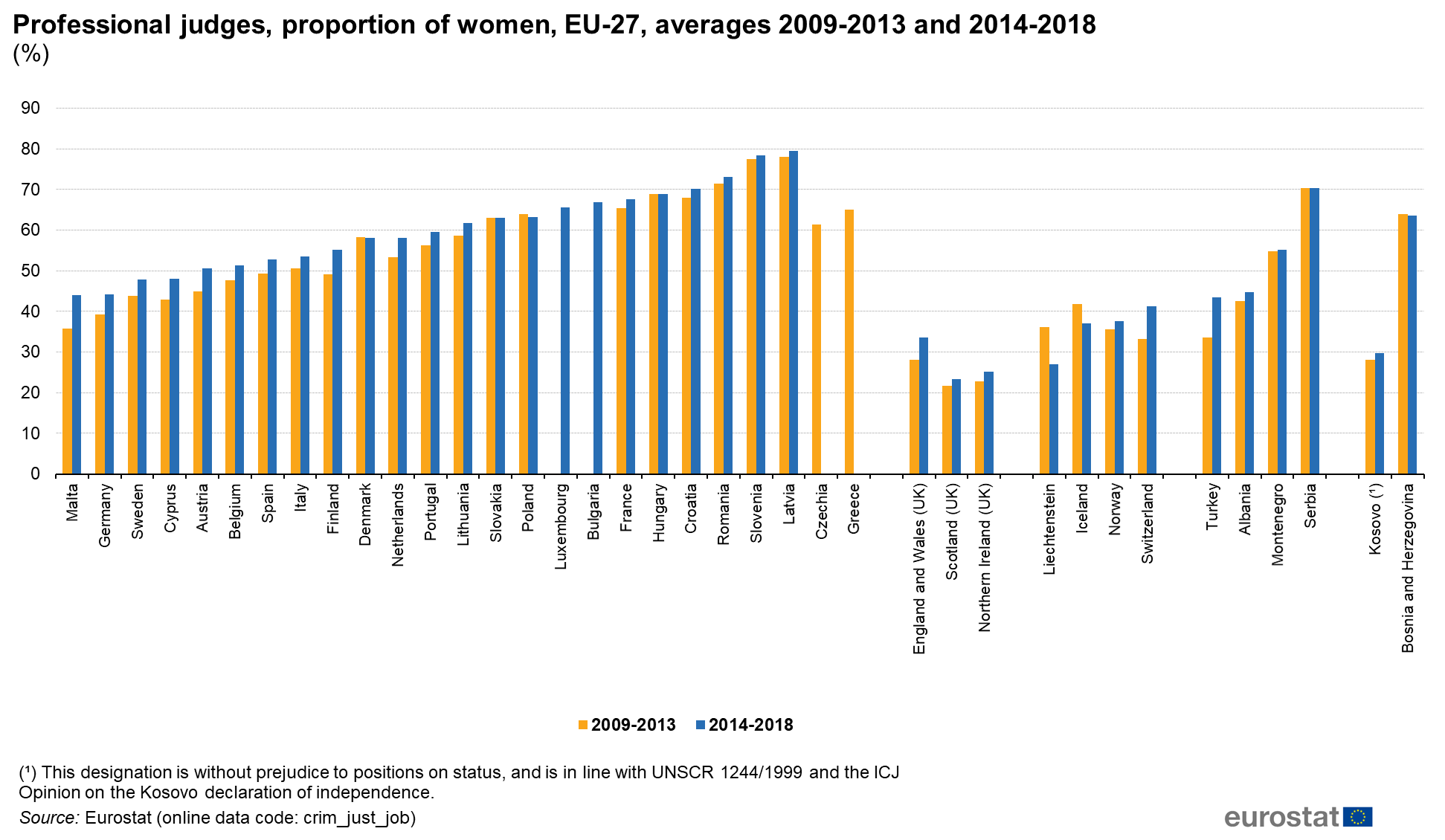 Falling number of prison personnel between 2008 and 2018

There were around 241 000 prison personnel in the EU in 2018, following a downward trend since 2008, as illustrated in Figure 5. The reduction generally follows the falling number of prisoners, but may also have other causes.

For various reasons, the number of prison personnel was not reported by all countries for all years. Because of this, the EU total for each year includes some figures reported for previous years. On the one hand, such a figure is less accurate in a year with many missing figures. On the other hand, when the reported figures are relatively stable (within countries), it is likely that the overall trend is also relatively stable. 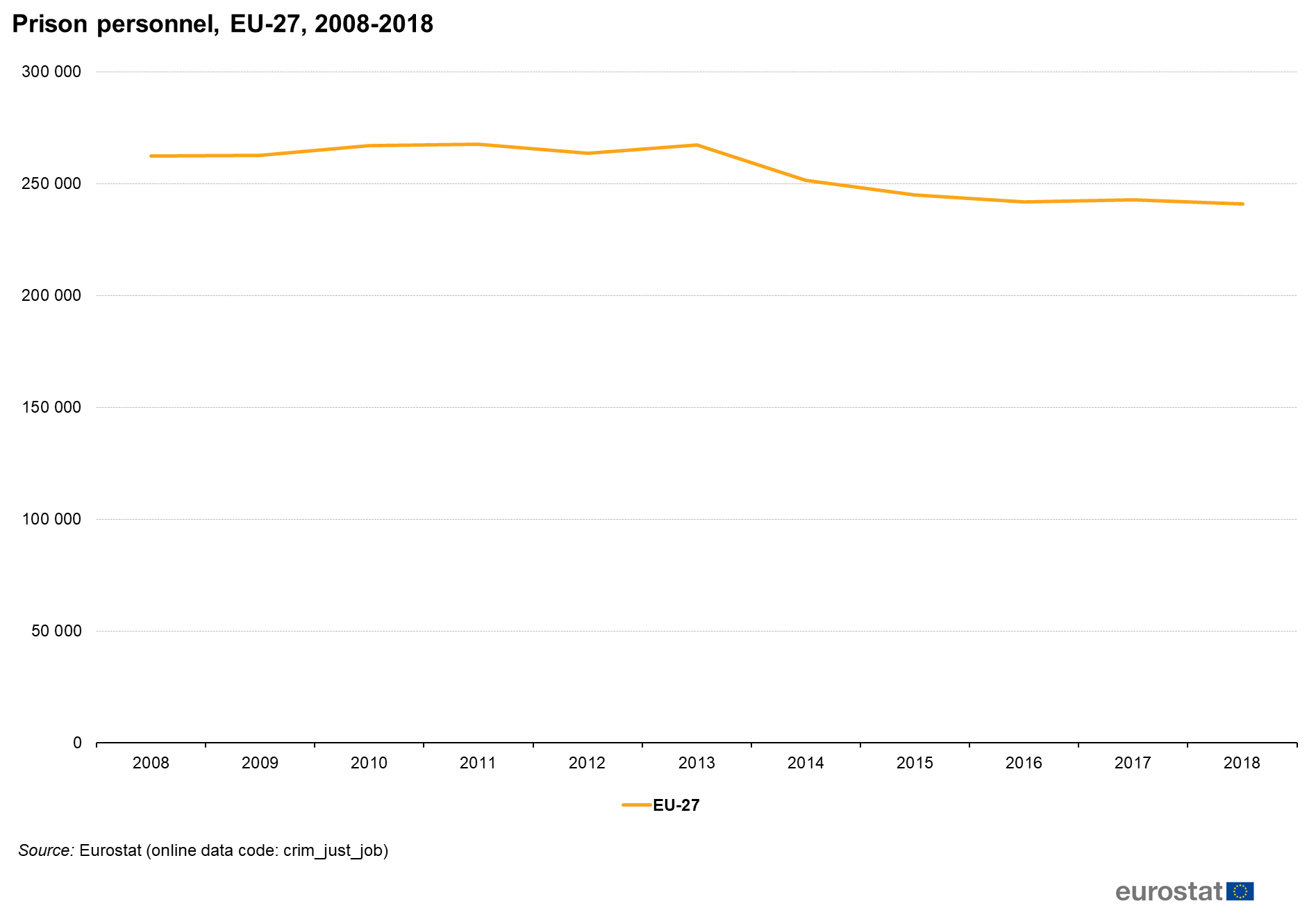 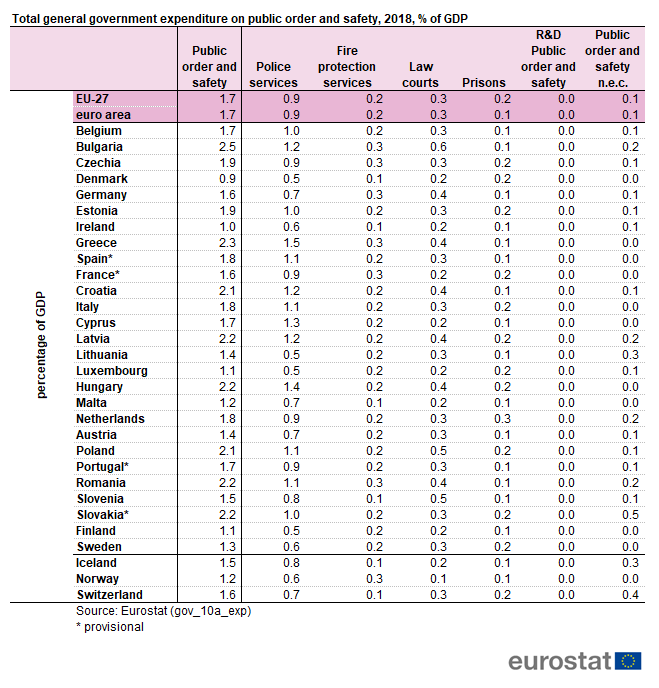 Data are official figures from national administrations of police, courts, and prisons. Each country provides official national figures to Eurostat as part of a yearly data collection on crime and criminal justice statistics. Due to missing reporting, any EU total in this article is presented for illustration only.

Police, court, and prison personnel statistics relate to the work of law enforcement services and criminal justice administration. The basic data are made for administrative purposes and mainly used by governments and authorities such as police, prosecution, courts, and prisons.