Archive:People at risk of poverty or social exclusion

(Redirected from People at risk of poverty or social exclusion)

This article has been archived - for updated articles on living conditions, please see here.

16.9 % of the population in the EU were at risk of poverty after social transfers in 2017.

In 2017, 6.6 % of the population in the EU were severely materially deprived.

At risk of poverty or social exclusion rate, 2017

<highlight> One of the five headline targets of the Europe 2020 headline indicators is to reduce poverty by lifting at least 20 million people out of the risk of poverty or social exclusion by 2020. This article presents geographical and temporal comparisons of the monetary and non-monetary elements of the indicator that describes poverty and social exclusion in the European Union (EU) using recent data from EU statistics on income and living conditions (EU-SILC). Comparisons over the most recent years enable, among other things, an analysis of the evolution of the social situation and its impact on the Europe 2020 headline target. Though the level of disposable income of households increased in nearly all Member States, recovery to pre-crisis levels is still incomplete in some.

Number of people at risk of poverty or social exclusion 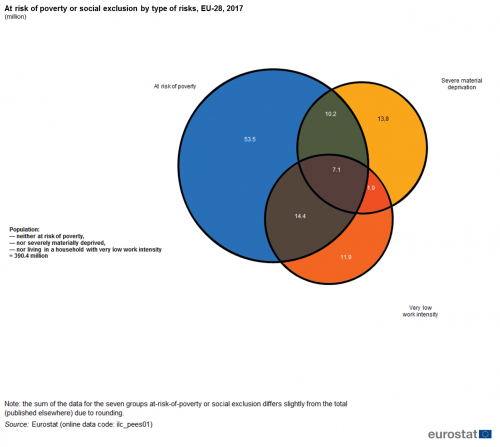 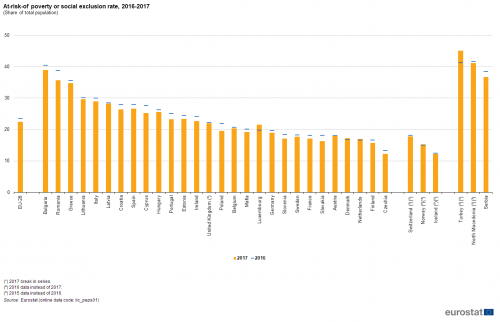 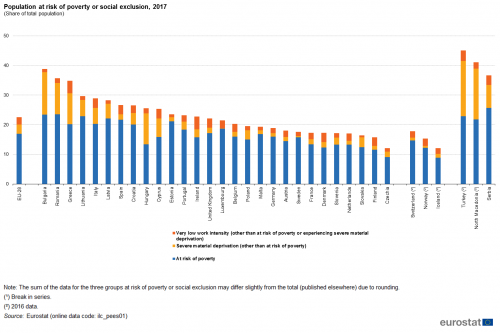 Figure 3 provides a simplified analysis for each EU Member State regarding the proportion of the population facing the three poverty or social exclusion risks identified above, showing:

Analysis of populations at risk

Overall, children and active-age adults have a higher risk of poverty or social exclusion 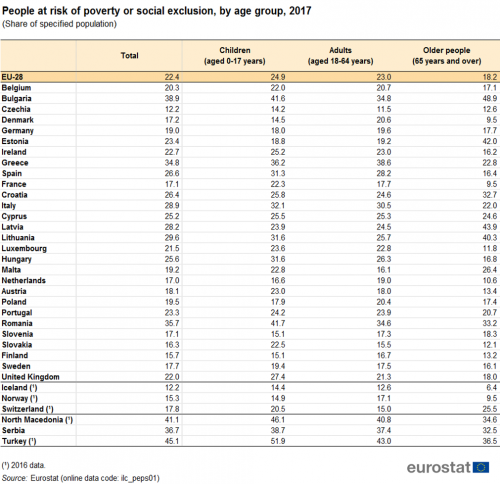 With an at-risk-of-poverty or social exclusion rate of 24.9 % in the EU-28, children were at greater risk in 2017 than the total population (22.4 %), as shown in Table 1. This situation was repeated in 19 of the EU Member States, and also in Iceland, Switzerland and all three candidate countries. In EU-28, the largest gaps between the rates for children and the total population were observed in Romania and Hungary (6.0 pp each) and Slovakia (6.2 pp), while in the Netherlands, Croatia, Finland, Germany, Poland, Slovenia, Denmark, Latvia and Estonia, the rate for children was below the average for the total population (ranging from -0.4 pp to -4.6 pp).

The percentage of children living in a household at risk of poverty or social exclusion ranged from less than 15.0 % in Denmark and Czechia to more than 40 % in Bulgaria (41.6 %) and Romania (41.7 %). The main factors affecting child poverty are:

There are also more vulnerable groups of children, such as those with migrant parents, which require particular attention.

Older people — defined here as persons aged 65 years and over — faced a lower risk of poverty or social exclusion in 2017 than the overall population, with 18.2 % compared with 22.4 % for the whole population. This lower risk was observed in 20 of the EU Member States. However, the risk of poverty or social exclusion faced by older people in 2017 was significantly higher than for the whole population in Estonia (+ 18.6 pp), Latvia (+ 15.7 pp), Lithuania (+ 10.7 pp) and Bulgaria (+ 10.0 pp). These differences in the relative situation of older people depend on a number of factors including: 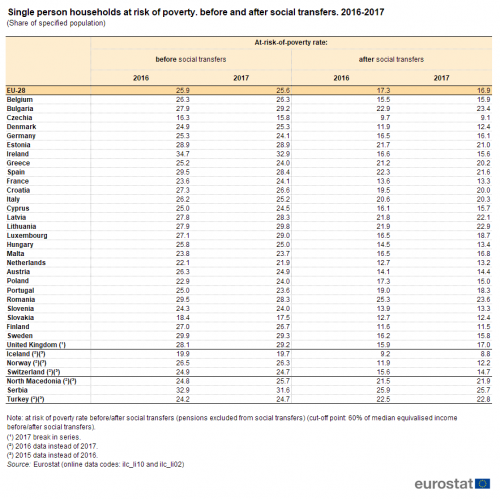 Table 2: Single person households at risk of poverty, before and after social transfers, 2016-2017
(Share of specified population)
Source: Eurostat (ilc_li10) and (ilc_li02)

Looking at each of the three elements contributing to being at risk of poverty or social exclusion, 16.9 % of the population in the EU-28 in 2017, were at risk of poverty after social transfers (see Table 2), meaning that their disposable income was below the national at-risk-of-poverty threshold. It is important to note that the at-risk-of-poverty rate is a relative measure of poverty and that the poverty threshold varies greatly between EU Member States.

The at risk of poverty rate (after social transfers) increased by 1 pp or more in Luxembourg, the United Kingdom and Lithuania in 2017, compared with the previous year. It should be noted that in the case of the United Kingdom, there was a break in series (year 2016). Elsewhere, increases were observed in Bulgaria, Croatia, the Netherlands and Denmark (0.5 pp each), Belgium (0.4 pp) and Latvia, Malta and Austria (0.3 pp each). The largest decreases in the at-risk-of-poverty rate between 2016 and 2017, above 1 pp, were in Greece and Ireland (-1 pp each), Hungary (-1.1 pp), Romania (-1.7 pp) and Poland (-2.3 pp); a large fall (-0.9 pp) was also observed in Switzerland.

The at-risk-of-poverty rate before social transfers fell 0.3 pp between 2016 and 2017 in the EU-28, to reach 25.6 %. The at-risk-of-poverty rate before social transfers decreased in 18 of the EU Member States between 2016 and 2017 and remained unchanged in two. The largest decrease was registered in Ireland where it fell by -1.8 pp, while decreases of between 1.0 and 1.4 pp were recorded in Italy, Spain, Germany, Greece, and Romania, Portugal and Austria and decreases of less than 1.0 pp in 10 Member States. Increases of 1.0 pp or more were observed in the United Kingdom and Poland (1.1 pp each), Bulgaria (1.3 pp) as well as in Luxembourg and Lithuania (1.9 pp each), although – as noted before - in the case of the United Kingdom it was a break in series. Along with changes in the distribution of income, at-risk-of-poverty rates may change because of changes in the poverty threshold. 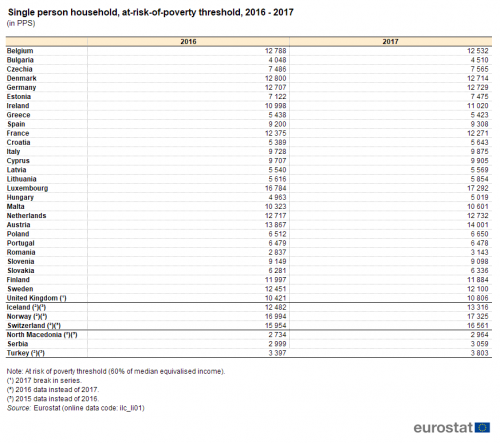 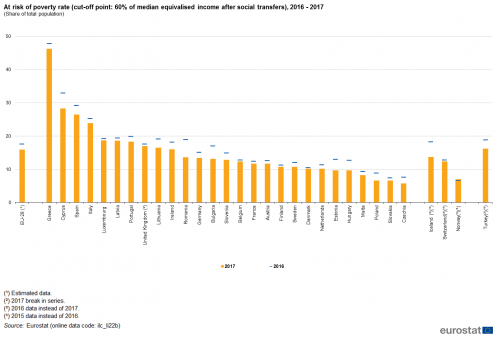 This indicator keeps the poverty threshold fixed, in real terms, over a multi-annual period and thereby removes the effects of a moving poverty threshold. The at-risk-of-poverty rate anchored in time provides complementary information, as it provides a longer-term perspective of the developments of monetary poverty, in particular when median income decreases.

In 2017, the share of persons aged 0-59 years living in households with very low work intensity decreased in 24 EU Member States 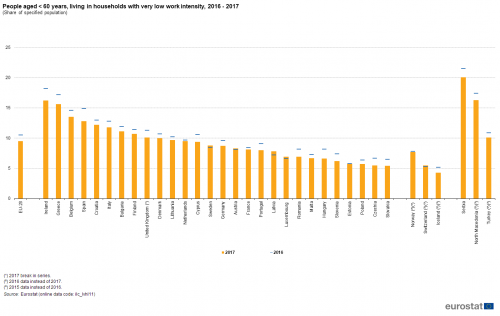 Work intensity refers to the ratio between the number of months that household members of working age (18-59 years, not being a student aged 18-24) worked during the income reference year and the total number of months that the same household members could theoretically have worked. For persons who declared that they worked part-time, the number of months in terms of full-time equivalents is estimated on the basis of the number of hours usually worked at the time of the interview. People living in households with very low work intensity are defined as people aged 0-59 years living in households where the adults worked 20 % or less of their total potential during the previous 12 months.

In 2017, compared with 2016, the share of persons aged 0-59 years living in households with very low work intensity decreased in 24 EU Member States, most strongly in Spain (-2.1 pp) and Ireland (-2.0 pp). In Estonia, no change was observable, while in Austria, Luxembourg, Sweden and Latvia increases of 0.2 pp or more were observed, with the largest increases in Latvia (0.6 pp). 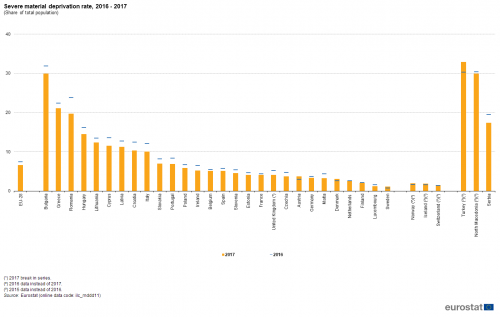 In the EU-28, 6.6 % of the population were severely materially deprived in 2017 (see Figure 6). The share of those severely materially deprived varied significantly among EU Member States, ranging from less than 2.0 % in Luxembourg and Sweden (as well as in Iceland and Switzerland - 2016 data) to more than one fifth in Greece (21.1 %) and one third in Bulgaria (30.0 %). Of all the reporting countries, the highest severe material deprivation rate was recorded in Turkey (32.9%). 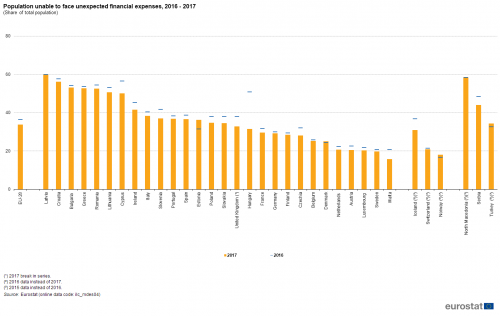 One of the material deprivation items is facing unexpected expenses. This item measures the ability of a household to cover — from their own resources — an unexpected expense amounting to one twelfth of the poverty threshold.

In 2017, 33.8 % of the EU-28 population reported difficulties in facing such unexpected expenses (see Figure 7), representing a decrease of 2.6 pp compared with 2016. There are considerable variations between EU Member States for this indicator. The percentage of people reporting such difficulties in 2017 ranged from less than one quarter in the Netherlands (20.7 %), Austria (20.6 %), Luxembourg (20.4 %), Sweden (19.7 %) and Malta (15.8 %), to more than half in eight Member States, peaking in Latvia (59.9 %). Compared with 2016, the proportion of people reporting difficulties facing unexpected expenses fell in all EU Member States except two, namely Estonia (+4.7 %) and Denmark (+0.6 %). A decrease in the proportion of the population that reported difficulties in facing unexpected expenses of 4.0 pp or more was observed in Czechia, Slovenia, Malta and the United Kingdom, while in Cyprus the proportion was down 6.5 pp. One Member State stood out from the others for this indicator, as this proportion fell 19.3 pp in Hungary, down from 50.8 % in 2016 to 31.5 % in 2017. Also, Iceland and Serbia noticed noteworthy decreases of -6.0 % and -4.2 % respectively.

The data used in this section are primarily derived from data from EU statistics on income and living conditions (EU-SILC). The reference population is all private households and their current members residing in the territory of an EU Member State at the time of data collection; persons living in collective households and in institutions are generally excluded from the target population. The EU-28 aggregate is a population-weighted average of individual national figures.

At the Laeken European Council in December 2001, European heads of state and government endorsed a first set of common statistical indicators for social exclusion and poverty that are subject to a continuing process of refinement by the indicators sub-group (ISG) of the social protection committee (SPC). These indicators are an essential element in the open method of coordination to monitor the progress made by the EU Member States in alleviating poverty and social exclusion. EU-SILC is the reference source for EU statistics on income and living conditions and, in particular, for indicators concerning social inclusion. In the context of the Europe 2020 strategy, the European Council adopted in June 2010 a headline target for social inclusion — namely, that by 2020 there should be at least 20 million fewer people in the EU who are at risk of poverty or social exclusion. EU-SILC is the source used to monitor progress towards this headline target, which is measured through an indicator that combines the at-risk-of-poverty rate, the severe material deprivation rate, and the proportion of people living in households with very low work intensity.

The total number of people at risk of poverty or social exclusion is lower than the sum of the numbers of people in each of the three forms of poverty or social exclusion (namely at risk of poverty after social transfers (income poverty), severe material deprivation, or living in households with very low work intensity), as some persons are affected simultaneously by more than one of these situations.