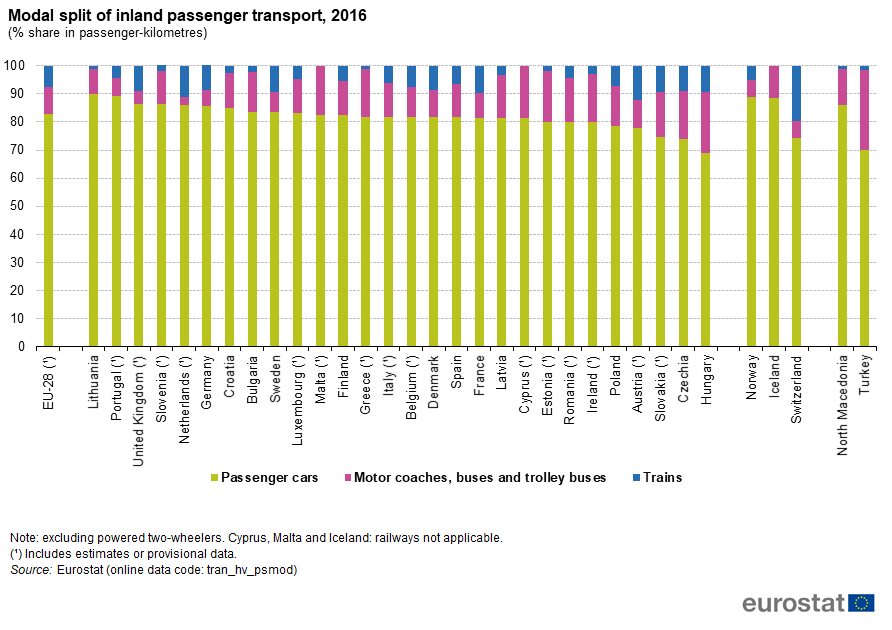 The EU Member States with the highest share of passenger transport by train were Austria (12.1 %) and the Netherlands (11.0 %). However, this was well below the EFTA country Switzerland, were trains carried out 19.8 % of all passenger transport in 2016. At the same time, their share was 2.0 % in Estonia and Slovenia and less in Greece and Lithuania, as well as in North Macedonia and Turkey.

Concerning rail transport, more than 9.6 billion passengers travelled on national railway networks in the EU, in 2017 (Table 1). It has to be noted that international transport represented less than 8 % of the total transport for all countries except Luxembourg where it represented 28 %. All in all, sixteen of the EU Member states reported increases in the total number of passenger transported between 2016 and 2017. The largest increases were recorded in Romania (+14.4 %), Slovakia (+8.3 %) and Estonia (+7.3 %). In contrast, the transport of passengers decreased by 4.7 % in Slovenia. Outside the EU, Montenegro and North Macedonia registered a large drop in rail passenger transport (-27.9 % and -24.5 %). 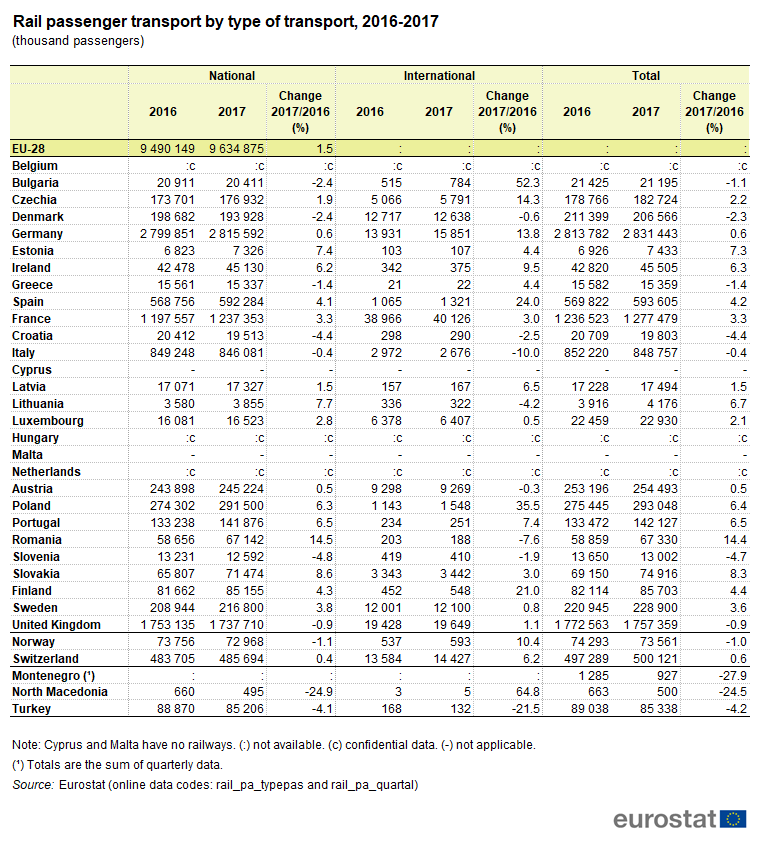 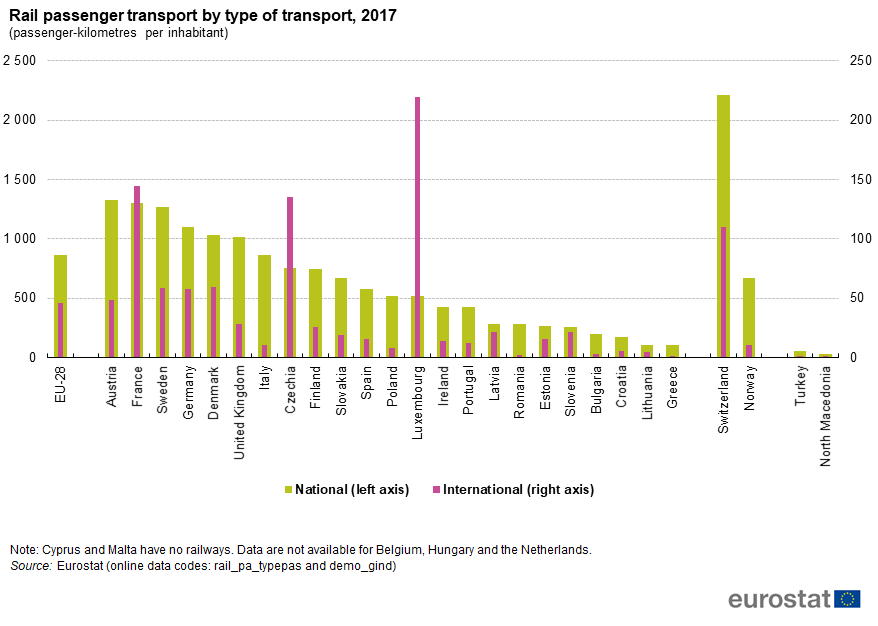 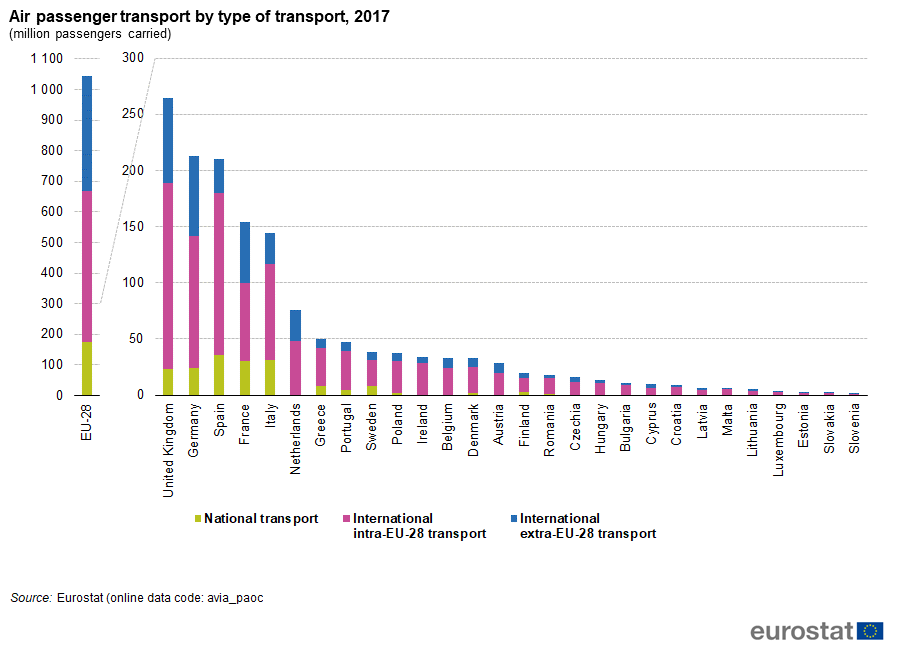 London Heathrow was the busiest airport in the EU in terms of passenger carried in 2017, with 78 million passengers arriving or departing (Figure 4). Heathrow has constantly remained the busiest airport in the EU since the beginning of the time series in 1993. It was followed — at some distance — by Paris’ Charles de Gaulle airport (69 million), Amsterdam’s Schiphol airport (68 million) and Frankfurt airport (64 million). The same airports have been the largest four in the EU since 2011, when Amsterdam Schiphol moved from fifth into fourth place.

The overwhelming majority of passengers travelling through these four busiest airports were travelling on international flights; the lowest share among them was recorded for Frankfurt airport (88.7 %), rising to 100.0 % for Amsterdam Schiphol. In contrast, national flights accounted for 28.3 % of the 52 million passengers carried through the EU’s fifth busiest passenger airport in 2017, Adolfo Suárez Madrid-Barajas. There were also relatively high proportions of passengers on national flights to and from Paris Orly (44.3 %), Roma Fiumicino (28.1 %) and Barcelona airport (27.1 %). 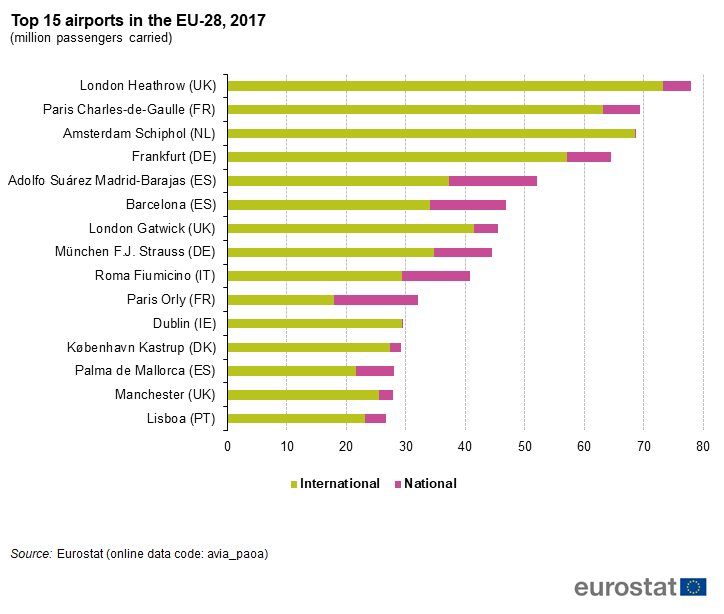 Map 1 presents some elements of the extra-EU air transport of passengers. With a 38 % increase between 2016 and 2017, ‘Asian Republics of the Ex-USSR’ is the partner world region with the highest increase for EU passenger transport. The highest and continued decrease of Australia – 4.1 % could be partially linked to the increase in Near and Middle East (+9.8 %) – more passengers taking indirect flight to Australia changing in Near and Middle East airports. North Africa also recorded an important increase after several years of decrease +19.5 %.

When it comes to maritime transport, the total number of passengers embarking and disembarking in EU ports is estimated at almost 415 million in 2017, a rise of 4.6 % from the previous year (Figure 5). Unlike goods movements, where broadly 60 % of goods are unloaded and 40 % loaded in the EU ports, the difference between the number of passengers disembarking ("inwards") and embarking ("outwards") in EU ports is generally small. This reflects the fact that seaborne passenger transport in Europe is mainly carried by national or intra-EU ferry services, with the same passengers being counted twice in the port throughput statistics (once when they embark the ferry in one EU port and once when they disembark the same ferry in another EU port). 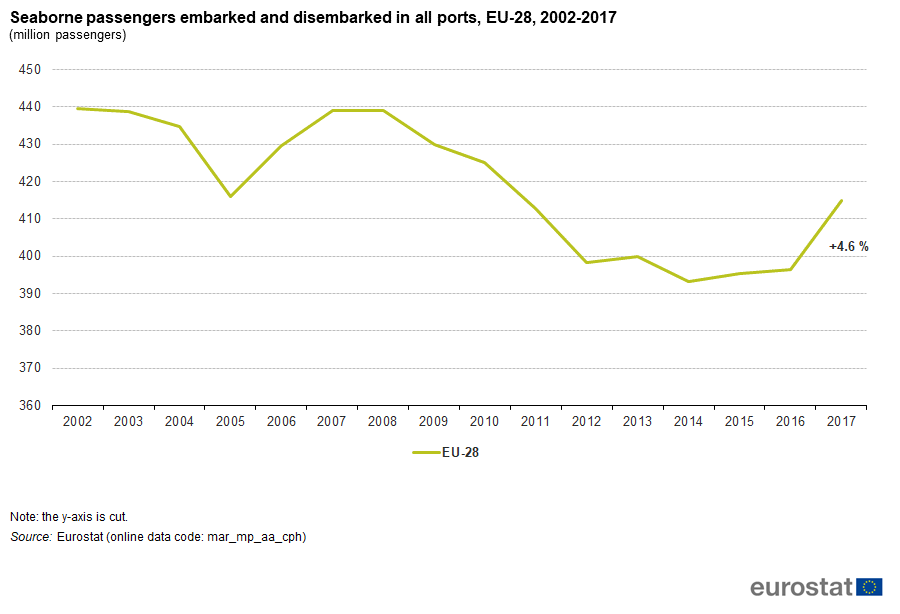 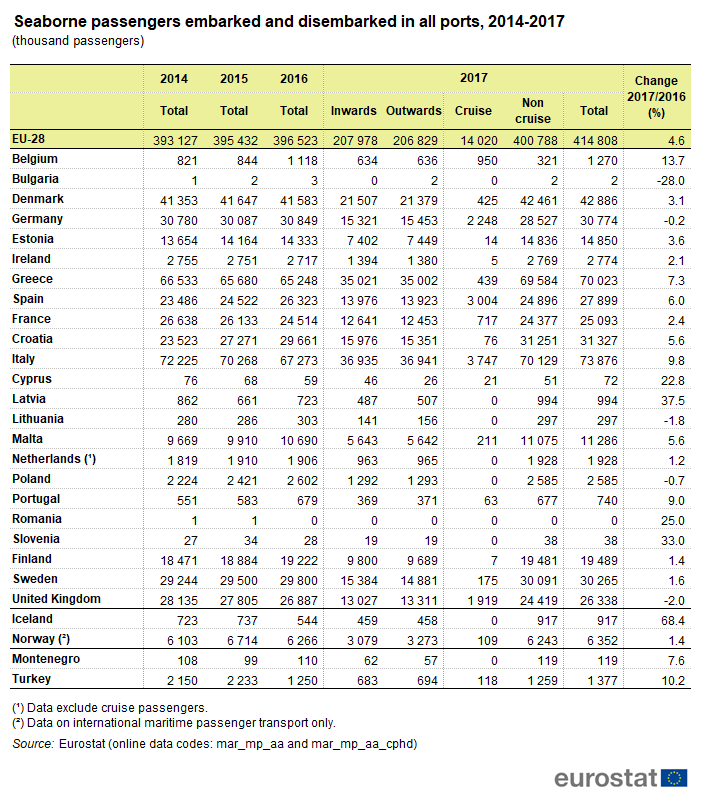 The majority of inland passenger transport statistics are based on vehicle movements in each of the reporting countries, regardless of the nationality of the vehicle or vessel involved (the ‘territoriality principle’). For this reason, the measure of passenger-kilometres (pkm, which represents one passenger travelling a distance of one kilometre) is generally considered as a more reliable measure, as a count of passengers entails a higher risk of double-counting, particularly for international transport. The methodology used across the EU Member States is not harmonised for road passenger transport.

The level of inland passenger transport (in passenger-kilometres) may also be expressed in relation to GDP; within this article, the indicator is presented based on GDP in constant prices for the reference year 2005. This indicator provides information on the relationship between passenger demand and the size of the economy and allows monitoring of the development of passenger transport demand relative to economic growth.

A rail passenger is any person, excluding members of the train crew, who makes a journey by train. Rail passenger data are not relevant for Malta and Cyprus (or Iceland) as these countries have no railways. Annual passenger statistics for national and international rail transport generally cover only larger rail transport enterprises, although some countries use detailed reporting for all railway operators.

Air transport statistics concern national and international transport, as measured by the number of passengers carried; information is collected for arrivals and departures. Air passengers carried relate to all passengers on a particular flight, counted once only and not repeatedly on each individual stage of that flight. Air passengers include all revenue and non-revenue passengers whose journeys begin or terminate at the reporting airport, as well as transfer passengers joining or leaving a flight at the reporting airport; excluded are direct transit passengers. Air transport statistics are collected monthly, quarterly and annually, although only the latter are presented in this article. Air transport passenger statistics also include the number of commercial passenger flights, as well as information relating to individual routes and the number of seats available. Annual data are available for most of the EU Member States from 2003 onwards.

Maritime transport data are generally available from 2001 onwards, although some EU Member States have provided data since 1997. Maritime transport statistics are not transmitted by the Czechia, Luxembourg, Hungary, Austria or Slovakia, as these are landlocked countries with no maritime traffic; the same applies to Liechtenstein and Switzerland.

A sea passenger is defined as any person that makes a sea journey on a merchant ship; service staff are not regarded as passengers, neither are non-fare paying crew members travelling but not assigned. Infants in arms are also excluded. Double-counting may arise when both the embarking port and the disembarking port report data; this is quite common for maritime transport of passengers, which is generally a relatively short distance activity.

EU transport policy seeks to ensure that passengers benefit from the same basic standards of treatment wherever they travel within the EU. Passengers already have a range of rights covering areas as diverse as: information about their journey; reservations and ticket prices; damages to their baggage; delays and cancellations; or difficulties encountered with package holidays. With this in mind the EU legislates to protect passenger rights across the different modes of transport:

Specific provisions have also been developed in order to ensure that passengers with reduced mobility are provided with necessary facilities and not refused carriage unfairly.

In December 2011, the European Commission adopted ‘A European vision for passengers: communication on passenger rights in all transport modes’ (COM(2011) 898 final). This acknowledged the work undertaken to introduce passenger protection measures to all modes of transport but notes that a full set of rights is not completely implemented. The Communication aims to consolidate the existing work, and move towards a more coherent, effective and harmonised application of rights alongside better understanding among passengers.

In March 2011, the European Commission adopted a White paper, the ‘Roadmap to a single European transport area — towards a competitive and resource efficient transport system’ (COM(2011) 144 final). This comprehensive strategy contains a roadmap of 40 specific initiatives to build a competitive transport system over a 10-year period that aims to increase mobility, remove major barriers in key areas and fuel growth and employment.

More details concerning the European Commission’s proposals for transport policy initiatives are provided in an introductory article on transport in the EU.