Passenger cars in the EU

Highlights
Tweet
In 2018, Luxembourg had the highest number of passenger cars per inhabitant in the EU, with 676 cars per 1000 inhabitants. 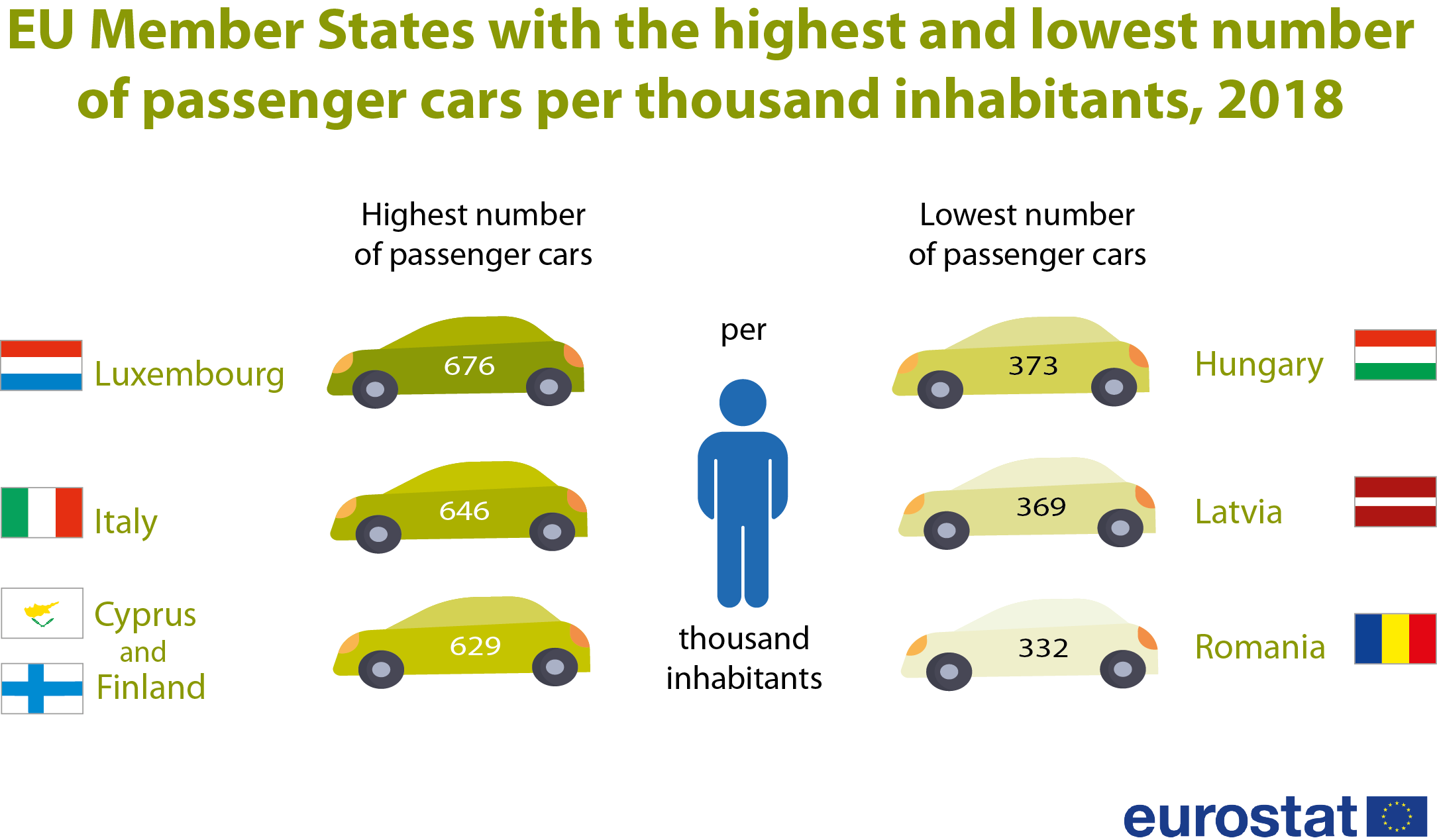 This article describes developments in passenger car stocks and new registrations in the European Union (EU), focusing in particular on passenger cars powered by ‘alternative fuels’.

Overall, the passenger car fleet in almost all of the EU Member States has grown over the last five years. The highest number of cars per inhabitant was recorded in Luxembourg, followed by Italy, Cyprus and Finland. In 2018, Poland had by far the highest share of passenger cars older than 20 years, followed by Estonia and Finland.

The preferences for whether a new passenger car should be powered by a petrol or diesel engine vary across the EU Member States. For the 21 Member States for which detailed data are available, 17 registered a higher petrol share; this is a change from the past, when a majority of Member States recorded a higher diesel share. 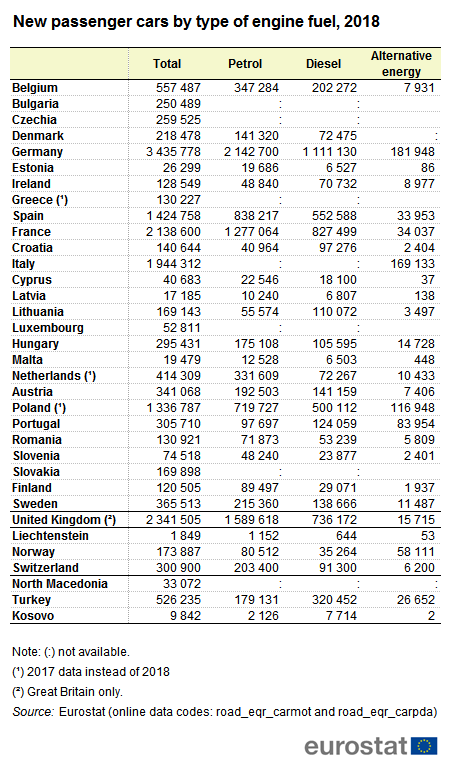 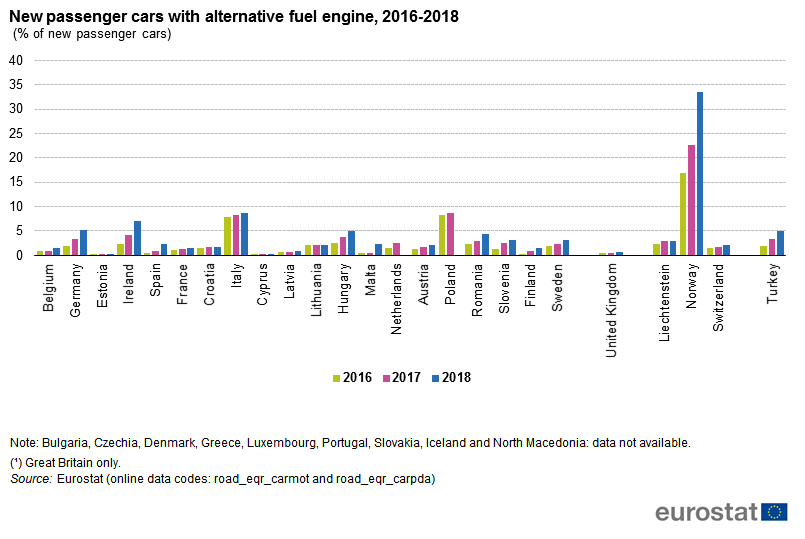 The share of registrations of new passenger cars powered by alternative fuel fluctuates in several countries; indeed, as can be seen from Figure 1, the share of cars with alternative fuels in the total new registrations increased from 2016 to 2018 in several countries. One of the reasons behind this is the variety of government incentives to stimulate the share of cars with lower emissions, and the timing of when these incentives are introduced. These incentives include e.g. tax reductions, subsidies or specific privileges such as access to lanes reserved for public transport, free parking, etc. Another main influence is the number and variety of passenger car models with alternative fuel engines offered, as well as the prices of such models.

Highest number of passenger cars per inhabitant in Luxembourg

In 2018, the highest number of registered passenger cars was observed in Germany with 47 million cars. Thereafter followed Italy (39 million cars) and France (32 million cars). Over the five year period from 2014 to 2018, there was strong growth in the number of registered passenger cars in several Member States. The highest growth over this period was recorded in Romania (31 %), followed by Czechia, Slovakia and Lithuania (each 19 %), Hungary and Portugal (both 17 %) and Cyprus (15 %). 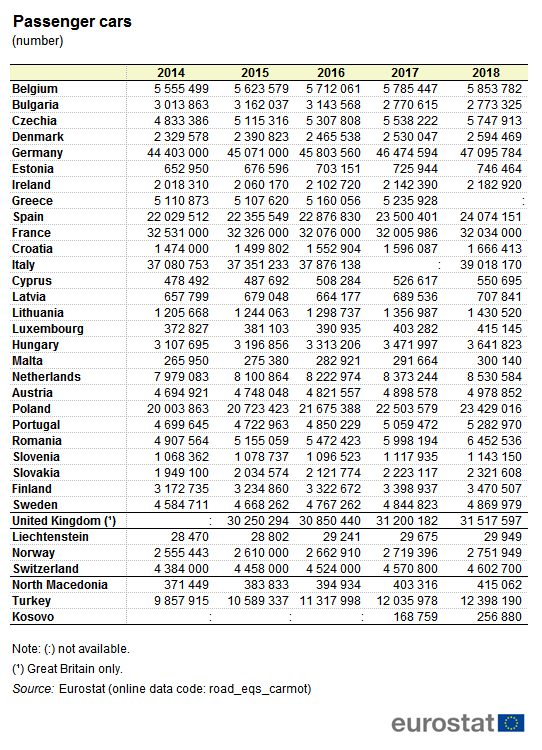 Only two Member States recorded a decline in the number of registered passenger cars over the period observed: France experienced a fall of 1.5 % and Bulgaria 8.0 % from 2014 to 2018. 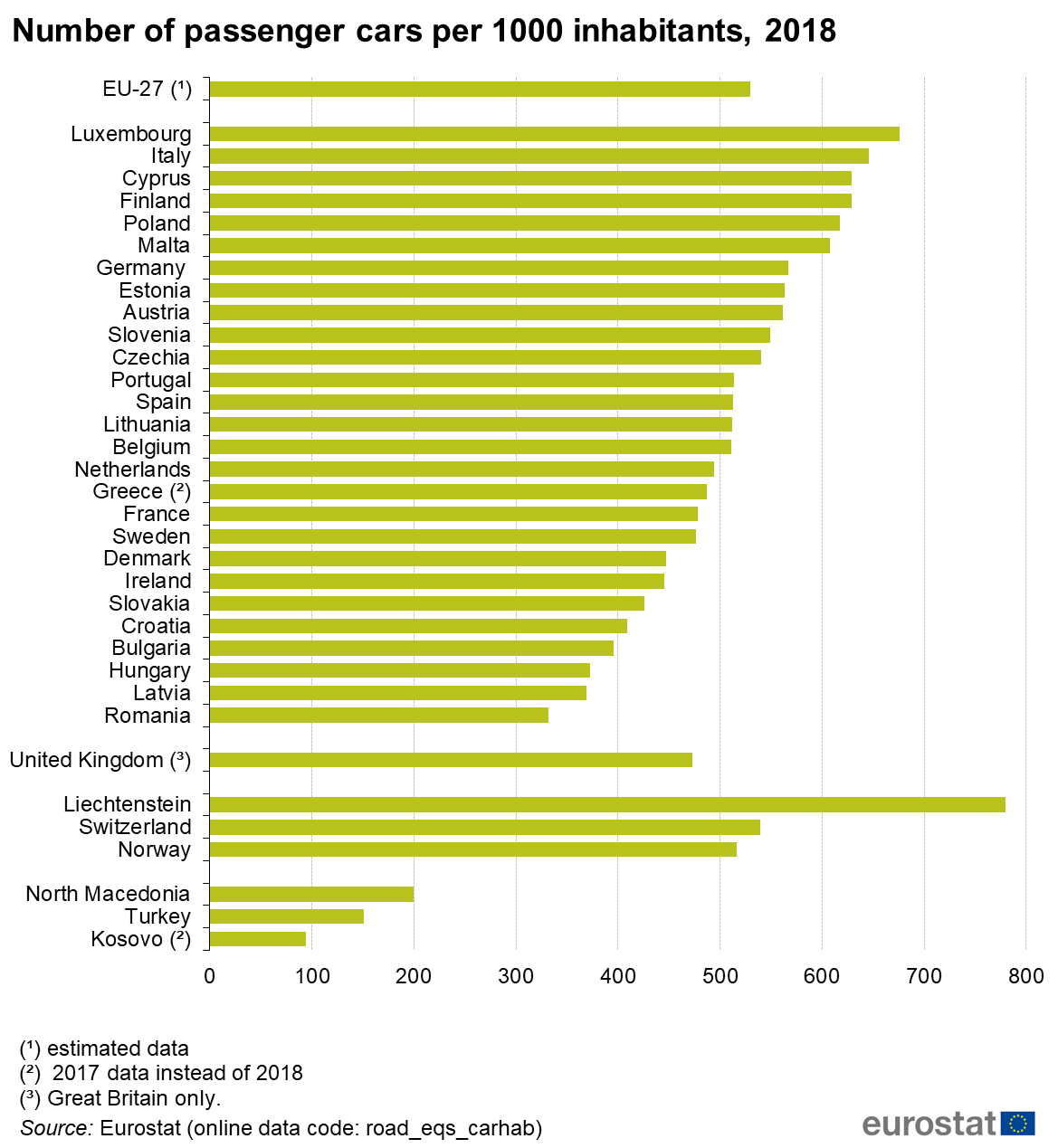 At the other end of the scale, a particularly low motorisation rate is recorded in Romania (332 cars), despite a growth in the number of registered cars of 31 % over the period 2014-2018. The motorisation rate in the two EU candidate countries for which data are available is substantially lower than in the Member States. The smallest value, 94 cars per thousand inhabitants, was recorded in Kosovo.

In 13 of the 23 Member States for which information is available, the majority of passenger cars were powered by a petrol engine in 2018. The ten Member States where there were more diesel cars than petrol cars were Lithuania, France, Latvia, Luxembourg, Spain, Portugal, Austria, Ireland, Belgium and Croatia (see Figure 3). 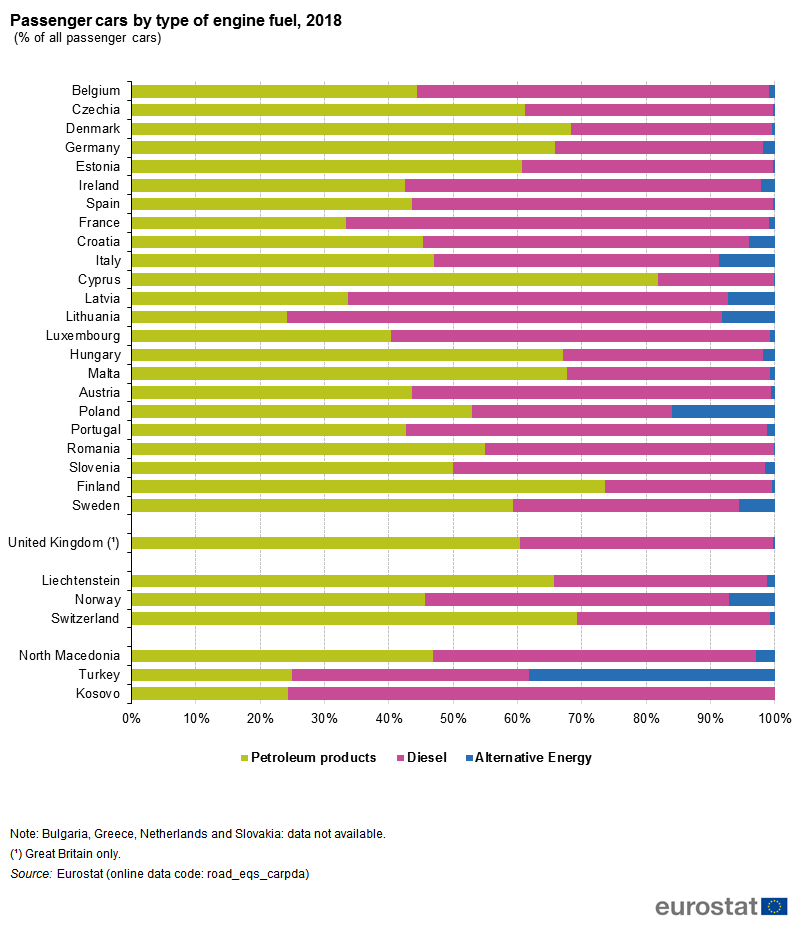 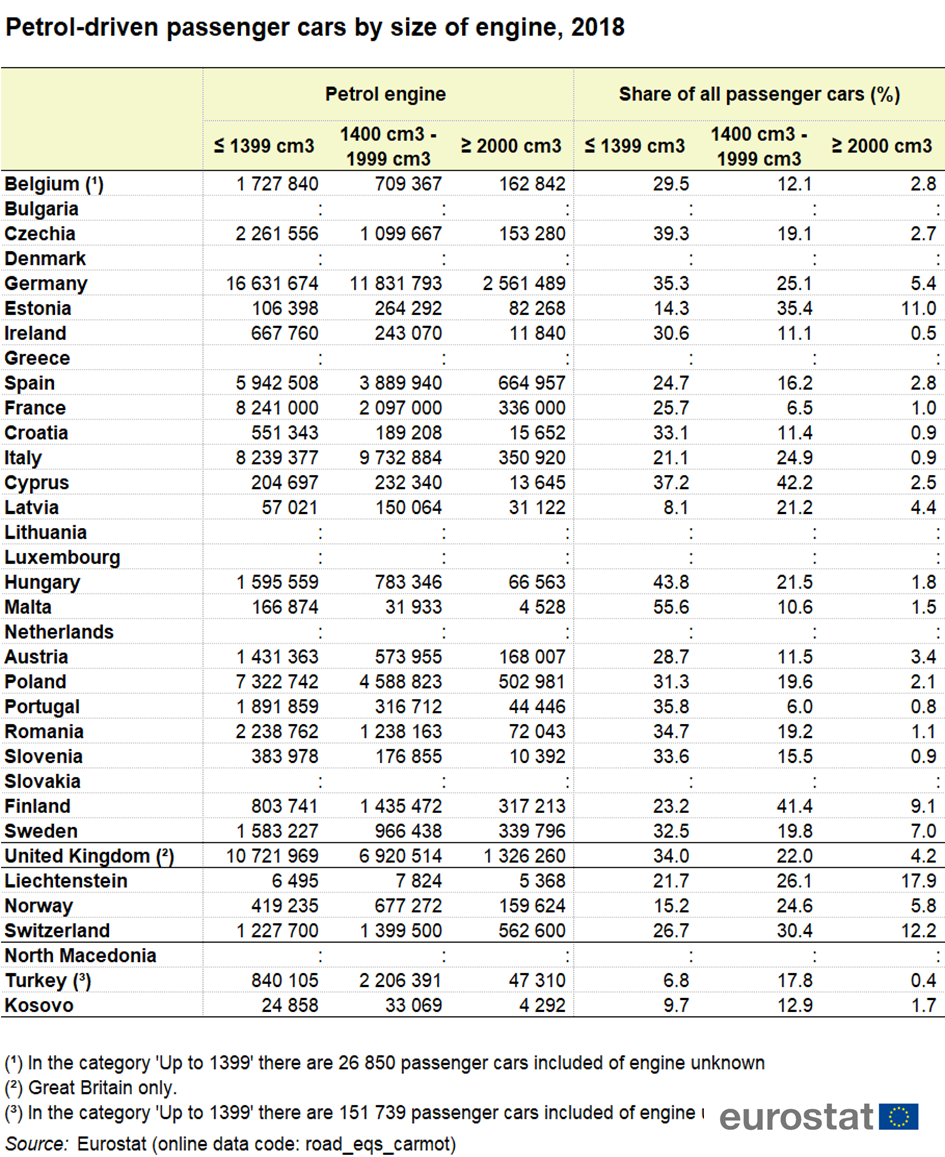 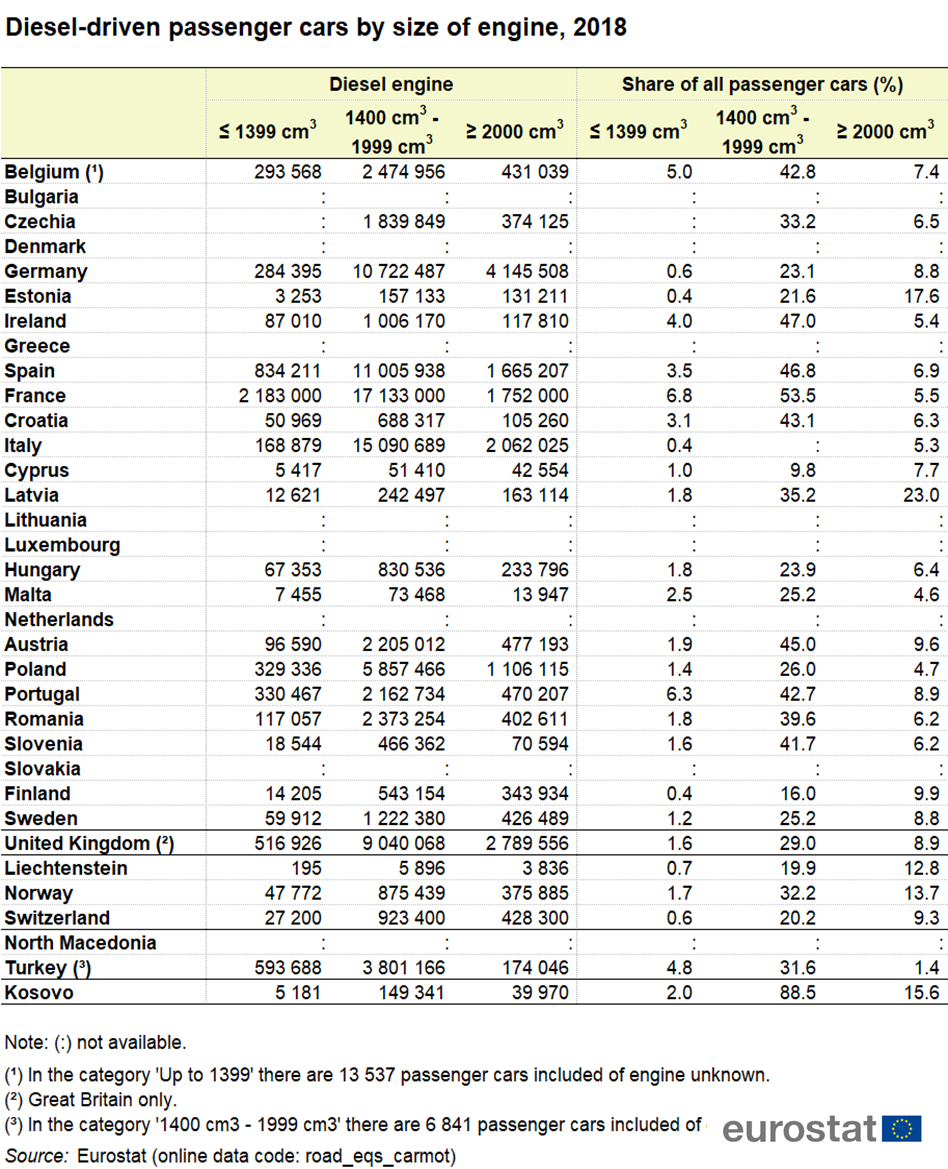 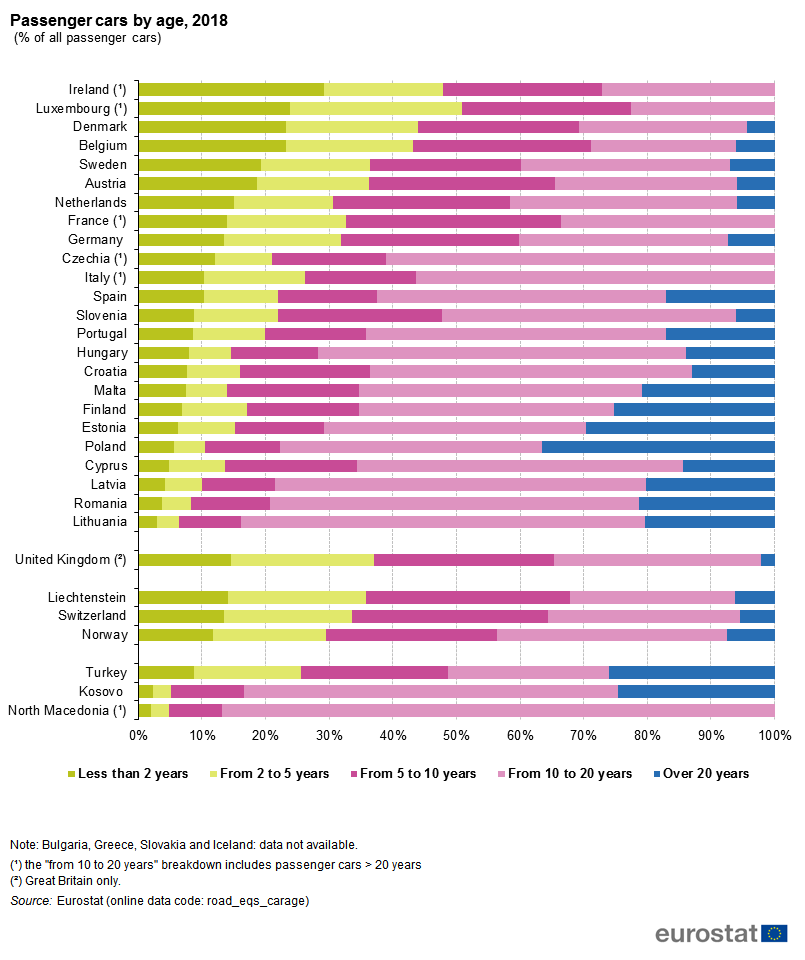 In recent years, a number of countries had programmes in place supporting the purchase of new cars with low emissions while scrapping the owners’ old car. The general aim of these programmes was the renewal of the passenger car fleet with lower emission cars, while simultaneously stimulating the economy. These programmes have had a certain influence on the age composition of passenger cars in individual countries. Such programmes were set up in almost half of the Member States; in this context, one should take note of the reference year when analysing these data.

Road motor vehicle, other than a moped or a motor cycle, intended for the carriage of passengers and designed to seat no more than nine persons (including the driver).

Excluded are light goods road vehicles, as well as motor-coaches and buses, and mini-buses/mini-coaches.

A type of motor energy other than the conventional fuels, petrol and diesel. Alternative fuels include electricity, LPG, natural gas (NGL or CNG), alcohols, mixtures of alcohols with other fuels, hydrogen, bio-fuels (such as biodiesel), etc. (this list is not exhaustive). Alternative fuels do not include unleaded petrol, reformulated petrol or city (low-sulphur) diesel.

The number of registered passenger cars per 1000 inhabitants.

The Common Questionnaire on Inland Transport is a joint project of Eurostat, the International Transport Forum (ITF) and the United Nations Economic Commission for Europe (UNECE). The data are provided on a voluntary basis by a large number of countries, both within and outside the European Union. Data is collected from reliable sources, but data collection methodologies are not harmonised at EU level. Comparability across countries is restricted as the classifications used in the national vehicle registers are not harmonised. Vehicle registers may exclude taxis, pick-up and vans, and may also exclude very old vehicles. This article covers data provided by the EU Member States, the United Kingdom, the European Free Trade Association (EFTA) countries and EU candidate countries.