16 900 enterprises were classified to mining and quarrying in the EU in 2019.

This article presents an overview of statistics for European Union (EU) mining and quarrying, covering NACE Rev. 2 Section B. It belongs to a set of statistical articles on 'Business economy by sector' .

There were around 16 900 enterprises operating with mining and quarrying (Section B) as their main activity in the EU in 2019. Together they employed 392 200 persons, equivalent to 0.3 % of all persons employed in the non-financial business economy (Sections B to J and L to N and Division 95), while they generated €33.1 billion of value added which was 0.5 % of the non-financial business economy total. 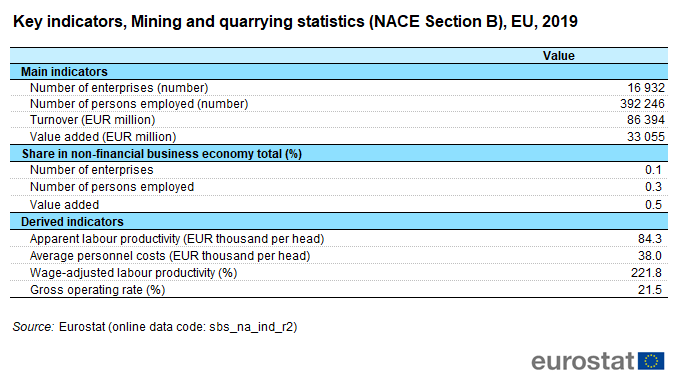 As can be seen from Figure 1, the contribution of the various subsectors to the EU’s mining and quarrying total varied considerably depending on whether value added or employment was the basis for the analysis. The variation in the relative significance of the different subsectors was even more amplified for some of the derived indicators concerning personnel costs, labour productivity and profitability, as shown in Table 2b.

Wage-adjusted labour productivity ratios for EU mining and quarrying NACE divisions in 2019 exceeded the non-financial business economy average (142.6 %), strongly pulled upwards by the mining of metal ores (274.5 %). This subsector achieved one of the highest wage-adjusted labour productivity ratios among all of the NACE divisions within the whole of the non-financial business economy. 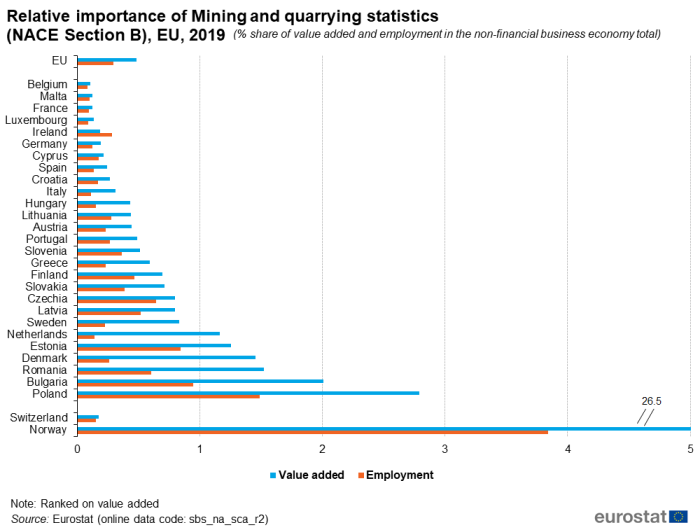 Poland recorded the highest share (22.8 %) of EU value added within the mining and quarrying sector in 2019. The Netherlands, as well as Germany, were also relatively large producers within the EU in value added terms. The Polish mining and quarrying employment of almost 150 000 persons was equivalent to more than one third (38.1 %) of the EU total, and was followed by Germany (10.1 %), Romania (6.3 %) and Czechia (6.2 %). The five largest Member States in the mining and quarrying sector accounted for a share of EU value added that was lower than the non-financial business economy as a whole, while in terms of employment it was in line with the non-financial business economy as a whole (see Figure 3). 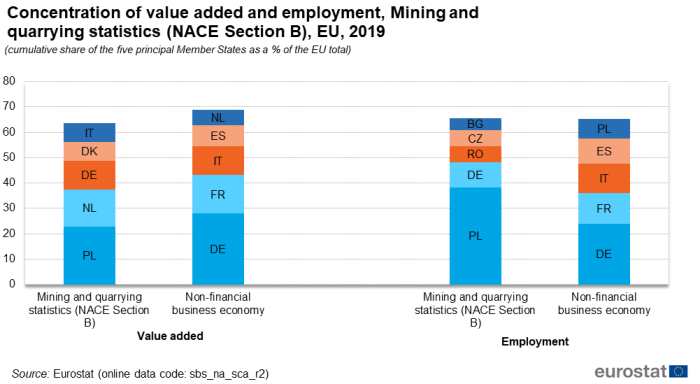 Figure 3: Concentration of value added and employment, Mining and quarrying statistics (NACE Section B), EU, 2019
(cumulative share of the five principal Member States as a % of the EU total)
Source: Eurostat (sbs_na_sca_r2)

The relative significance of the mining and quarrying sector across the EU Member States tended to be highest among those countries specialised in the extraction of fossil fuels: these figures were closely linked to the geological distribution of fossil fuel deposits, which were scarce or non-existent in many of the Member States. Bulgaria recorded the highest ratio in mining of metal ores, while the Netherlands was the most specialised in the extraction of crude petroleum and natural gas.

These various specialisations are reflected in the derived indicators. For example, Member States with a high degree of specialisation in the extraction of crude petroleum and natural gas recorded high apparent labour productivity for mining and quarrying as a whole, as can be seen for the Netherlands.

The enterprise size structure of the EU’s mining and quarrying sector would appear to be dominated by large enterprises (employing 250 or more persons) —  more than half (59.0 %) of sectoral value added was generated by less than 200 large enterprises and these also employed almost two thirds (59.6 %) of the total number of persons employed in 2019. 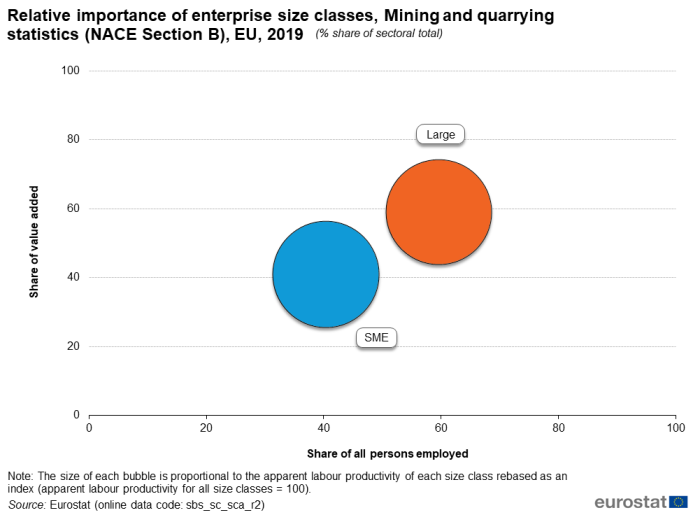 However, this overall situation for mining and quarrying is a combination of different structures in the subsectors within the EU. Some activities are particularly concentrated in only a few locations and characterised by a high dominance of large enterprises: for extraction of crude petroleum and natural gas they contributed 60.5 % of value added, while for other mining and quarrying they contributed 24.6 %. In this last sector SMEs (employing fewer than 250 persons) accounted for 75.4 % of the persons employed.

Mining and quarrying, covers NACE Rev. 2 Section B. This activity concerns the extraction of:

Note that this article only covers extractive activities, and not the downstream processing of fuel, nor the manufacture of non-metallic mineral products, both of which are classified under manufacturing (Section C), nor the network supply of energy (Section D) (Section D).

The analysis presented in this article is based on the main dataset for structural business statistics (SBS), size class data and regional data, all of which are published annually.

The main series provides information for each EU Member State as well as a number of non-member countries at a detailed level according to the activity classification NACE. Data are available for a wide range of variables.

In structural business statistics, size classes are generally defined by the number of persons employed. A limited set of the standard structural business statistics variables (for example, the number of enterprises, turnover, persons employed and value added) are analysed by size class, mostly down to the three-digit (group) level of NACE. The main size classes used in this article for presenting the results are:

Structural business statistics also include regional data. Regional SBS data are available at NUTS levels 1 and 2 for most of the EU Member States, Iceland and Norway, mostly down to the two-digit (division) level of NACE. Regional data for Croatia was not available for 2012. The main variable analysed in this article is the number of persons employed. The type of statistical unit used for regional SBS data is normally the local unit, which is an enterprise or part of an enterprise situated in a geographically identified place. Local units are classified into sectors (by NACE) normally according to their own main activity, but in some EU Member States the activity code is assigned on the basis of the principal activity of the enterprise to which the local unit belongs. The main SBS data series are presented at national level only, and for this national data the statistical unit is the enterprise. It is possible for the principal activity of a local unit to differ from that of the enterprise to which it belongs. Hence, national SBS data from the main series are not necessarily directly comparable with national aggregates compiled from regional SBS.

The location of mining and quarrying generally reflects the spatial distribution of mineral deposits. However, there can be considerable cost differences between mines, for example, in relation to the depth at which deposits are found, or whether they are on land or at sea. Aside from geographical and geological cost differences, the decision of whether or not to (re-)open a mine may also depend, among others, on global, commodity prices, employment practices, as well as regulations concerning the environmental impact of mining or the disposal of its waste. Opencast (or surface) mines and quarries are generally cheaper than deep mines — although they may be rejected in the planning stage due to their effect on local landscapes. All forms of mining and quarrying incur environmental costs, which may relate to the disposal of waste, increased pollution, potential for ground subsidence, or changes to the local supply and quality of water.

The mining and quarrying sector is characterised as a capital-intensive activity. This is particularly the case for projects that require exploration and test drilling in advance of the considerable investment required to establish a new mine or off-shore drilling facility. As such, the global mining and quarrying sector is characterised by a relatively small number of international enterprise groups that operate across the continents — some with extraction and/or support service operations in the EU. These large-scale producers are particularly common in the extraction of fossil fuels. The vast majority of hard coal and lignite that is extracted or imported into the EU is consumed as a transformation input, mostly used in conventional thermal power stations or in coke oven plants. Over several decades the EU’s coal mining activity has been in decline due to competition from coal imports and the substitution of other fuels to produce electricity, the latter stimulated in part by efforts to reduce emissions. Crude oil is essentially a transformation input, used in refineries.

Many of the products resulting from the activity of this sector are traded globally and prices are established on global markets. One of the most closely followed prices is the price of crude oil, which is not only of interest for this sector itself, but also for the many downstream activities that are intensive users of energy as well as the chemicals sector that uses petroleum as a raw material.

The extraction of construction materials is dominated by a large number of smaller enterprises, typically serving a local market in low-value, widely-available products. Whilst the EU is largely self-sufficient in the extraction of construction materials, there are a large number of other minerals that are essential for downstream manufacturing activities for which there is no indigenous supply within the EU; for example the EU has high net imports of metallic minerals. Other industrial minerals are often further processed in downstream industrial sectors, for example, in the manufacture of glass, concrete and basic or agricultural chemicals. Minerals are also used in industrial processes and precious and semi-precious stones and metals are used in jewellery and for some industrial processes.

Policies related to energy and to climate change are particularly important for many parts of the mining and quarrying sector. The EU aims to become a low-carbon, energy-efficient economy in the coming decades. The integrated energy and climate change policy laid out in December 2008 aimed to cut greenhouse gases by 20 %, reduce energy consumption by 20 % through increased energy efficiency and to meet 20 % of the EU’s energy needs from renewable sources by 2020 — these goals had implications on the way extractive activities operate. In a Communication in November 2010 the European Commission presented its Energy 2020 strategy for competitive, sustainable and secure energy — see also an article on the electricity, gas, steam and air conditioning supply sector.