Although the Statistical Office of the Republic of Slovenia (SURS) had considerable experience in using and disseminating various register-based geo-referenced statistics, this expertise did not extend to temporal analyses.

This project looked at a specific challenge for official statistics, namely, to make use of already existing data managed by mobile network operators to open-up new fields of analyses. The main objectives of the project were to:

SURS obtained data on mobile telecommunications from the second largest mobile network operator in Slovenia. The data set covered the period between 1 May and 31 October 2014 and contained information on all events that were initiated by mobile users, as recorded through geo-referenced x,y coordinates of mobile base stations (antennae). The project explored how such large volumes of geo-referenced information might be handled using standard geographic information system (GIS) processes to open-up new forms of temporal analyses for population mobility (as measured by changes in the location of mobile phone users).

The data set that was obtained for the project included the following information:

The distribution of mobile base stations tends to be denser in urban and commercial areas or along major transport arteries and consequently scarcer in more rural areas. This issue might, at least to some degree, be rectified if the project were to be extended so it covered more than one mobile network operator.

Through the processing of mobile data, SURS acquired experience in various activities — from data transmission, secure and auditable processing, through to the development of GIS applications and data visualisations. The data were stored in tables (one for each month) with an auditing system centred on an ORACLE database containing in excess of a billion records. The main challenge was in relation to the storage of data (an issue that may prove to be of even greater relevance if the project is, one day, extended to cover the regular transmission of data from all mobile operators in Slovenia).

As SURS wished to compare the data on the position of mobile phones with register-based data, it was necessary to find a common territorial division whereby both data sources could be joined. To do this, the areas between individual base stations were analysed to determine a set of Voronoi polygons providing an estimation of the boundaries in coverage between base stations.

The Slovenian information commissioner dissuaded SURS from directly linking data on an individual’s location/the position of their mobile phone with register-based data, so as to avoid any potential disclosure of user identity. Therefore, SURS developed a model based on a 500 m² grid, estimating temporal population densities for each cell. Point-based locations of the base stations were merged with information for municipalities to generate new municipality-like divisions based on the Voronoi polygons around each base station. This solution allowed SURS to develop analyses combining register-based data (such as that for employees or actual residences) with mobile phone data detailing an individual’s position during the day. The temporal dimension of the data set placed these statistics in a new perspective as the data on mobile phone locations were captured in real-time, thereby highlighting temporal patterns which could be used for a variety of applications, for example, an analysis of the average time taken to get to work or preferred routes taken by commuters. 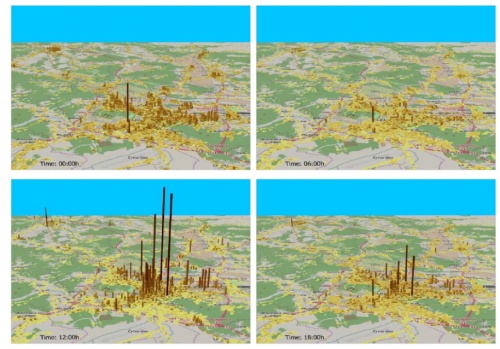 A final example demonstrates how information for people usually resident in Ljubljana may be analysed to ascertain if they leave the city at weekends (perhaps to visit family or to make use of a secondary dwelling in the countryside or on the coast). Figure 4 shows information on weekend locations that are favoured by Ljubljana residents. 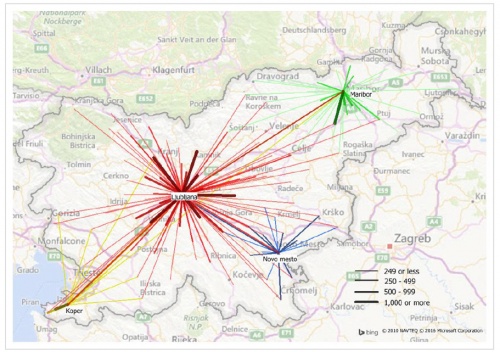 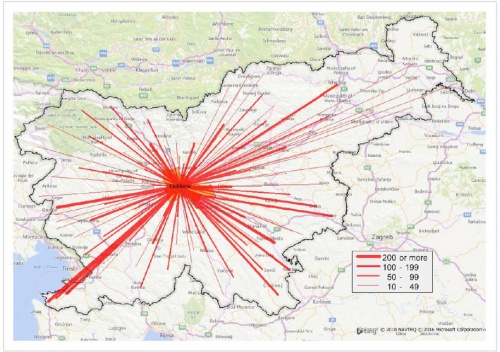 Figure 4: Usual location of Ljubljana residents on Saturdays and Sundays, 2015

Given that data access was a considerable issue when setting-up the project — with lengthy discussions over the potential use that might be made of this big data source — SURS devoted a considerable amount of time following the study to promote the activities that were undertaken, with the goal of expanding the project to a range of new applications including, for example, studies of commuter, tourism or transport patterns, or applications relating to civil protection and/or disaster relief.