Prior to the initiation of this project there was a lack of know-how and experience for merging statistics and geospatial information within the Croatian Bureau of Statistics (CBS).

This project provided the opportunity to merge 2011 census data about the population, households and dwellings with spatial information using geographic information system (GIS) tools. By doing so, one of the main objectives of the project was to integrate geographical and statistical information to increase the usefulness of data through grid-based population statistics, which would allow key policy initiatives (such as the Europe 2020 strategy or GDP and beyond initiative) to be defined better, measured more accurately, analysed and monitored at a local level.

To provide users of official statistics with geographically referenced statistics, this project sought to make use of population grids as a tool to provide local information on societal developments and relationships. This type of data was considered to be of particular use for analysing phenomena which are independent of administrative boundaries, such as commuting or urban sprawl.

To deliver the project a working group was established and training was provided for several members of CBS staff, including:

When setting-up the system for grid-based statistics, the first step was to analyse the quality of data and the methodologies used elsewhere in the EU Member States. The population grid was established on the basis of geo-referenced national micro data and a country clip Lambert-Azimuthal Equal Area (LAEA) grid. The CBS generated grid cell identification codes for national micro data using GIS software, joining grid cell centroids with the country clip using ArcMap10 (the central application of ArcGIS software). The results were subsequently re-projected so that it was possible to populate the European ETRS89/LAEA grid and derive an ArcGIS shapefile with house numbers.

Once the CBS had a 1 km² grid set-up, use was made of algorithms to enable data protection and aggregation methods for point-based data or enumeration areas, generating a set of geospatial statistics within ArcMap10. The data produced were largely derived from CBS data sources, but also made use of information provided by the Croatian State Geodetic Administration (SGA). The data set was composed of both simple and complex statistics, together with accompanying analysis and included data about: 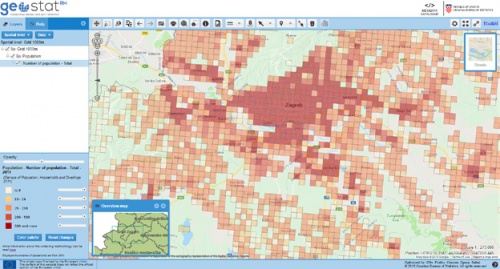 The final step in the project was to develop an application, the GeoSTAT portal, to assist in creating and publishing interactive maps for displaying grid-based results. Secondary data protection was implemented such that any grid cell with fewer than four persons had its information hidden for a set of main variables, while a threshold of fewer than 10 persons was applied to the indicators covering the population by activity status and the population by highest level of educational attainment.

The CBS produced a quality report on its grid-based statistics and a set of methodological guidelines for the Merging of statistical data of the Census of Population, Households and Dwellings 2011 and geospatial information in the Republic of Croatia was published on the CBS website. 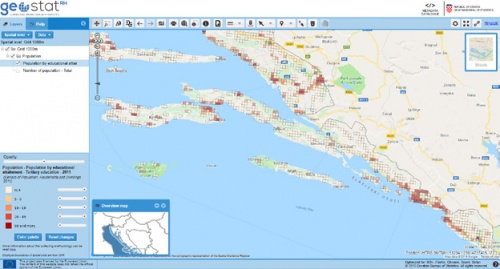 Figure 2: Number of people with a tertiary level of educational attainment, by 1 km² grid

The project was designed and documented such that the results could potentially be reused by other statistical entities within the EU Member States. Furthermore, much of the information and experience gained during the course of the project was used subsequently to develop a geoportal for the capital city, Zagreb, with information on its local infrastructure and spatial data.