Archive:Marriages and births in Spain

This article on marriages and births is part of a pilot project implemented by Eurostat together with eight Member States (Estonia, Spain, Latvia, Croatia, the Netherlands, Romania, Slovenia and Sweden). The aim of the pilot project is to better reply to user's needs by complementing the Eurostat article presenting data on an EU level with more detailed information on the same topic, but at national level. Articles from the eight Member States are available in the corresponding national languages as well as in English and they form, together with the Eurostat article, an online publication. 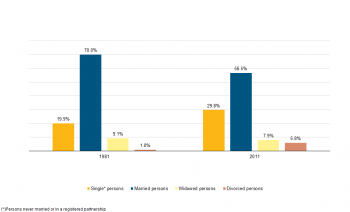 Figure 1: Population over 20 years of age according to their marital status in Spain
Source: Census 2011, INE 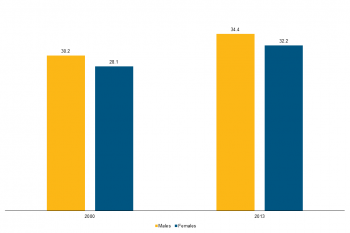 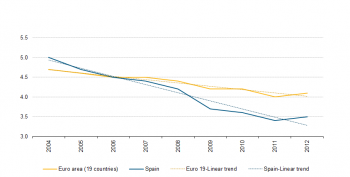 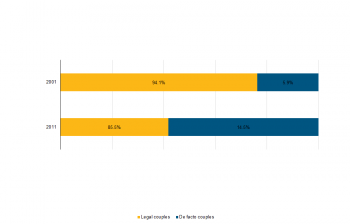 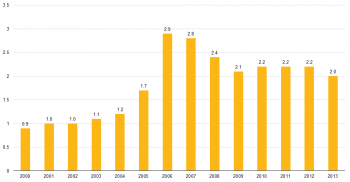 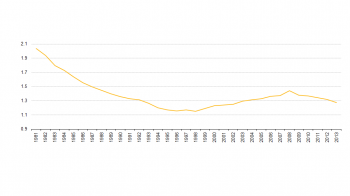 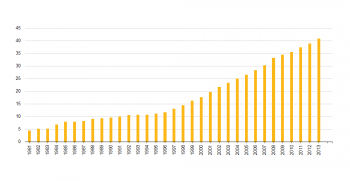 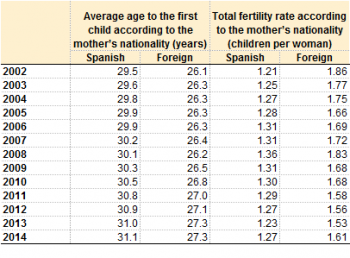 Spain is now one of the countries in Europe where children are born at a later age. Couples now get married less frequently than before and they also wait longer. Young people remain single longer, there are more consensual unions and more births outside marriage. The divorce rate has doubled over the last decade.

This is a noteworthy change in the traditional way of family formation. The law has been amended, giving rise to higher flexibility in the processes of couple formation and dissolution, and new models for living together have appeared alongside the traditional marriage model.

Married people prevail, but number of marriages goes down

If we compare this data with the 1981 census, a rise in the percentage of single and divorced people, and a drop in that of married and widowed persons can be noticed .

When examining the evolution of marital status by age group it can be seen that being single has increased for people under 50 years. Divorces have spread to almost all ages, with the highest incidence between 35 and 65 years.

Fewer marriages and at later ages

Another important fact is the lower intensity of marriage for women compared with men until 1992. From then on, women have surpassed and increased their lead over men.

Within the European Union the marriage rate has also been reduced, although the decline has been more intense in Spain, which has become one of the countries where there are least marriages per inhabitant and where people get married latest.

More flexibility in the processes of couple formation and dissolution

The formation of family units has undergone significant change in recent years.

While the number of marriages has experienced a drop, cohabitation as a way of forming couples has increased. Comparing data from the 2001 and 2011 censuses we can see that the number of consensual unions has doubled, going from 5.9 % of total couples in 2001 to 14.5 % in 2011.

Within the European Union, Spain stands in an intermediate position, with 8.8 % of people over 20 years old living with a partner without being married, more than four times above the countries with the lowest rates (Greece and Poland), and less than half those recording the highest (Sweden and Estonia).

In July 2005 same-sex weddings were legalized in Spain and they were included in marriage statistics as part of the Spanish Vital Statistics. Available data since then shows that the percentage of same-sex marriage in Spain is around 2 %.

In 1981 the law allowing divorce in Spain and establishing separation as a previous step for obtaining divorce was approved. Its amendment in 2005 removed this requirement, allowing the acceleration of the process.

While divorces have increased, there has been a rise in remarriage. The evolution of the total number of marriages moved away from that of first marriages since the 1981 divorce legalization, and from that moment on it can be seen that more people get remarried for the second or more time over the years.

In Spain, fewer children and later

From the mid-seventies to the late nineties of the last century fertility indicators gradually fell in Spain. At the beginning of the XXI century a recovery of fertility occurred, influenced in part by the high birth rate behaviour of immigrants and also by the arrival of mothers in fertile ages who were born during the Spanish baby-boom. However, since 2009 a further decline in fertility indicators which extends to 2013 has been recorded.

If we compare Spanish fertility with the rest of the EU Member States, we find that Spain is one of the countries where they have fewest children per woman and those at a later age.

The evolution of this rate has shown a rise in recent years to stand close to the European average.

Increased incidence of fertility due to the contribution of foreign population

In Spain, the contribution of the foreign population to the number of births each year is notable. 22.5 % of those born in 2013 in Spain come from couples where at least one of the parents is a foreigner, although the proportion varies significantly between different regions.

The contribution of foreign immigration to the Spanish population increased fertility indicators during the first years of this century and, in recent years, the decline in foreign population has contributed to the decrease of these indicators.

The incidence of fertility for foreign women in 2013 was higher than for Spanish. On average, they have 0.3 more children per women than Spanish women, and foreign mothers who give birth to their first child are about 4 years younger than Spanish.