The Netherlands remained the largest maritime freight transport country in Europe in 2018.

Rotterdam, Antwerpen and Hamburg maintained their positions as Europe's top 3 ports in 2018.

This article presents the latest statistical data on freight handling and passenger traffic in ports in the European Union (EU), the United Kingdom, the EFTA countries Iceland and Norway and the candidate countries Montenegro and Turkey. It also covers maritime transport flows with the main partner geographical areas, as well as individual results for major European ports. This article contains data for 2018.

Increase in seaborne goods and passengers in EU ports

The total gross weight of goods handled in EU ports is estimated at 3.6 billion tonnes in 2018, an increase of 3.6 % from 2017. According to the latest figures, the EU port freight activity seems to have resumed on a slight path towards recovery in 2014, a trend that was sustained in all quarters of 2017 and 2018 (Figure 1). The gross weight of goods handled in EU ports in 2018 reached a new peak, overpassing the volumes handled in the years immediately preceding the economic downturn in Europe in 2009, with 219 million tonnes (+6.5 %) more than in the peak reached in 2007. 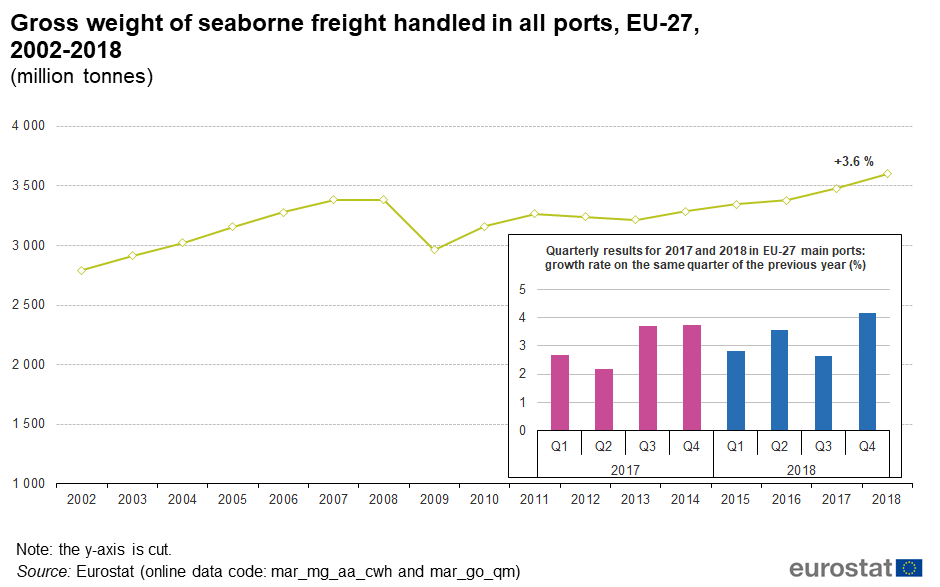 The Netherlands remained the largest maritime freight transport country in Europe in 2018, while Rotterdam, Antwerpen, Hamburg, Amsterdam, Algeciras, Marseille and Izmit maintained their positions as the 7 largest freight ports. 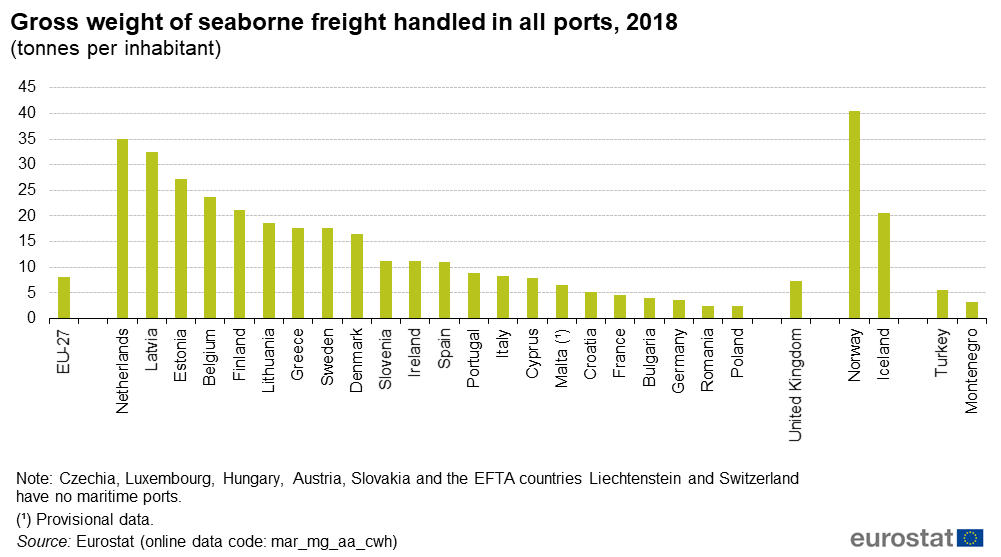 The number of passengers passing through EU ports increased by 5.6 % between 2017 and 2018, to almost 410 million passengers (Figure 7). After falling regularly until 2015, the total number of passengers embarking and disembarking in EU ports recovered in the last three years to reach similar levels than in 2008 (+0.2 % in 2018 compared with 2008).

The Netherlands has reported the largest volumes of seaborne freight handling in Europe every year since overtaking the United Kingdom in 2010. At 605 million tonnes, the volume of seaborne goods handled in Dutch ports represented 16.8 % of the EU total in 2018. The Netherlands was followed by Spain and Italy. Their respective shares were 14.4 % and 13.9 % of the EU total (Figure 3). 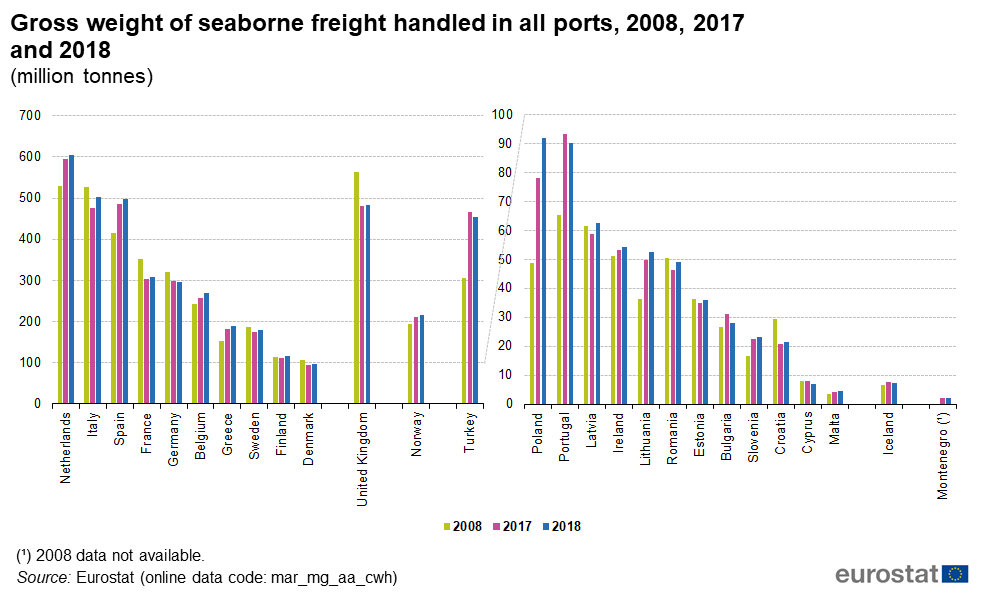 Among other countries reporting maritime freight data to Eurostat, the United Kingdom and the candidate country Turkey handled 483 and 454 million tonnes of goods in 2018, placing these two countries between Italy and France in terms of total tonnage of seaborne goods handled.

Inward movements of goods to the EU countries increased by 4.0 % to more than 2.1 billion tonnes in 2018 compared with 2017, while outwards movements increased by 3.0 % to 1.5 billion tonnes. Nonetheless, inward movements still accounted for 59.6 % of the total tonnes of goods handled in the EU ports (Figure 4). Liquid bulk goods, such as crude oil and oil products, made up a substantial proportion of the inward tonnage. 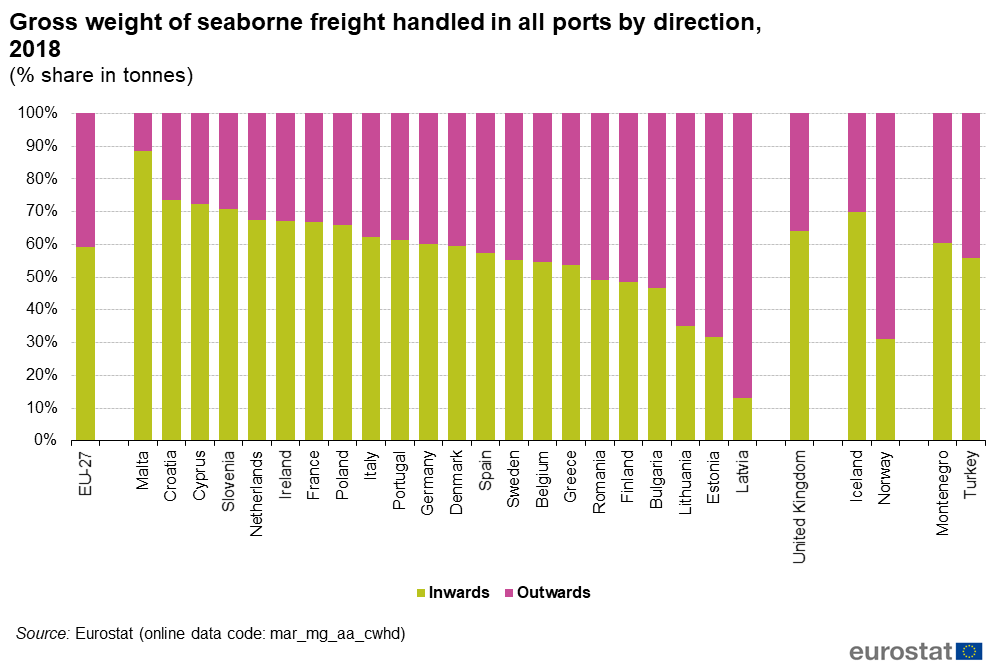 More seaborne goods are unloaded from than loaded onto vessels in the majority of EU countries. Croatia and Cyprus had the highest shares of unloaded goods in 2018, with respective shares of 74 % and 72 % of the total tonnes of seaborne goods recorded as inward movements to their ports. Iceland also had a high share of 70 %. In contrast, the three Baltic countries, Bulgaria, Finland, Romania and the EEA country Norway all had high shares of outward movements of goods of the total movements of tonnes to their ports.

Liquid bulk made up 35.9 % of the total cargo handled 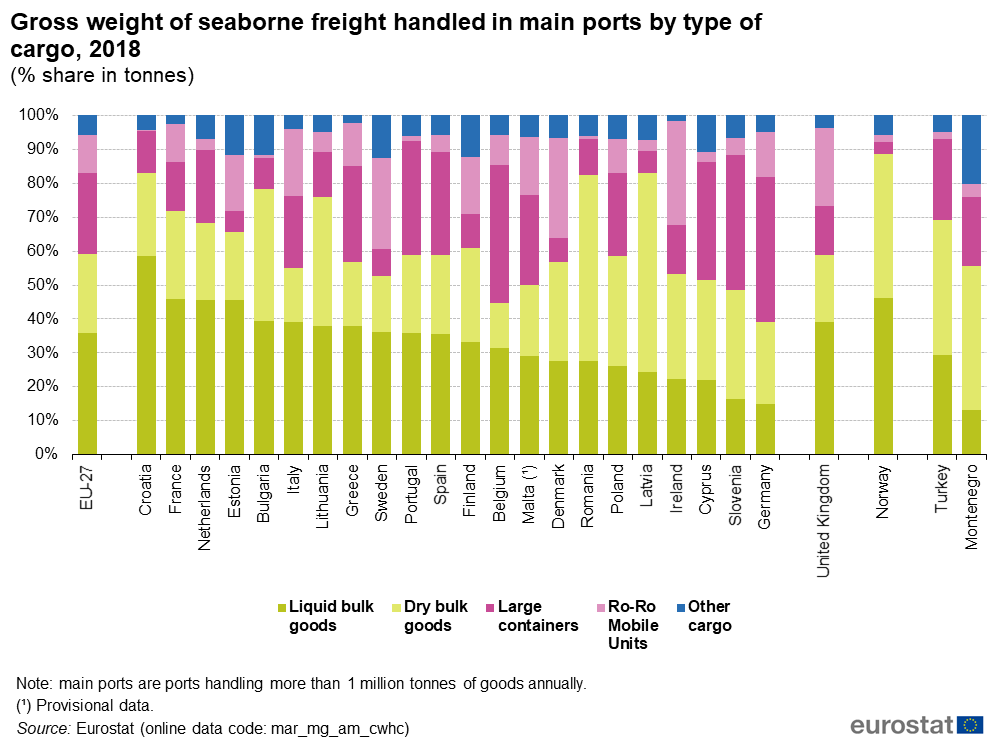 Rotterdam, Antwerpen and Hamburg, all located on the North Sea coast, maintained their positions as Europe's top three ports in 2018, both in terms of the gross weight of goods handled and in terms of the volume of containers handled in the ports. The 20 largest cargo ports accounted for 38 % of the total tonnage of goods handled in the main ports of the reporting countries in 2018, a slight decrease compared with 2017. The largest port in Europe, Rotterdam in the Netherlands, on its own accounted for just above 9 % of the total tonnage handled in the countries reporting maritime freight data to Eurostat (Table 1). 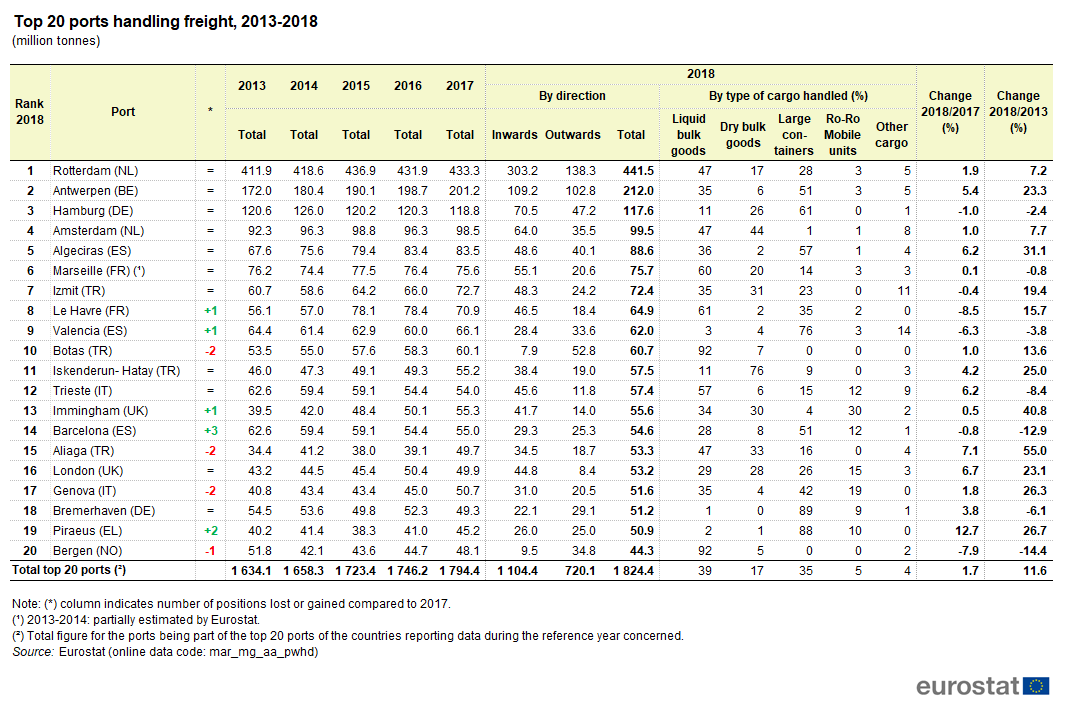 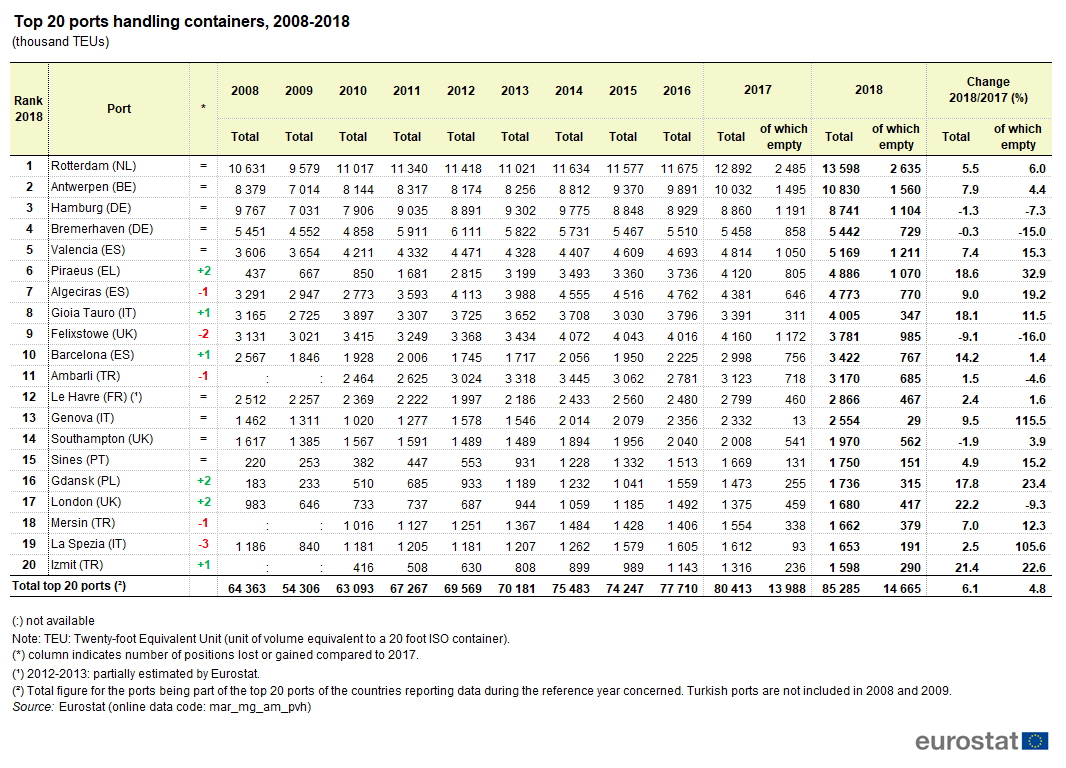 The most specialised of the top 20 cargo ports in handling containers were Bremerhaven, Piraeus and Valencia; the most specialised in handling liquid bulk goods were Botas and Bergen. While inward activity was prevalent in most of the top 20 ports, the ports of Bergen and Botas handled substantial outward movements of crude oil. In addition, Bremerhaven and Valencia recorded slightly more outward than inward movements of containerised goods.

All in all, 11 of the top 20 cargo ports of the reporting countries, in 2018 were located on the Mediterranean, 8 on the North Sea coast of Europe and the remaining port on the Atlantic coast (Map 1). The composition of the national port infrastructure will sometimes determine whether a country is represented on the top 20 list of cargo ports or not. Denmark and Finland, for instance, are countries with a large number of medium-sized ports, all handling volumes of goods lower than the 44 million annual tonnes required to make the top 20 list. 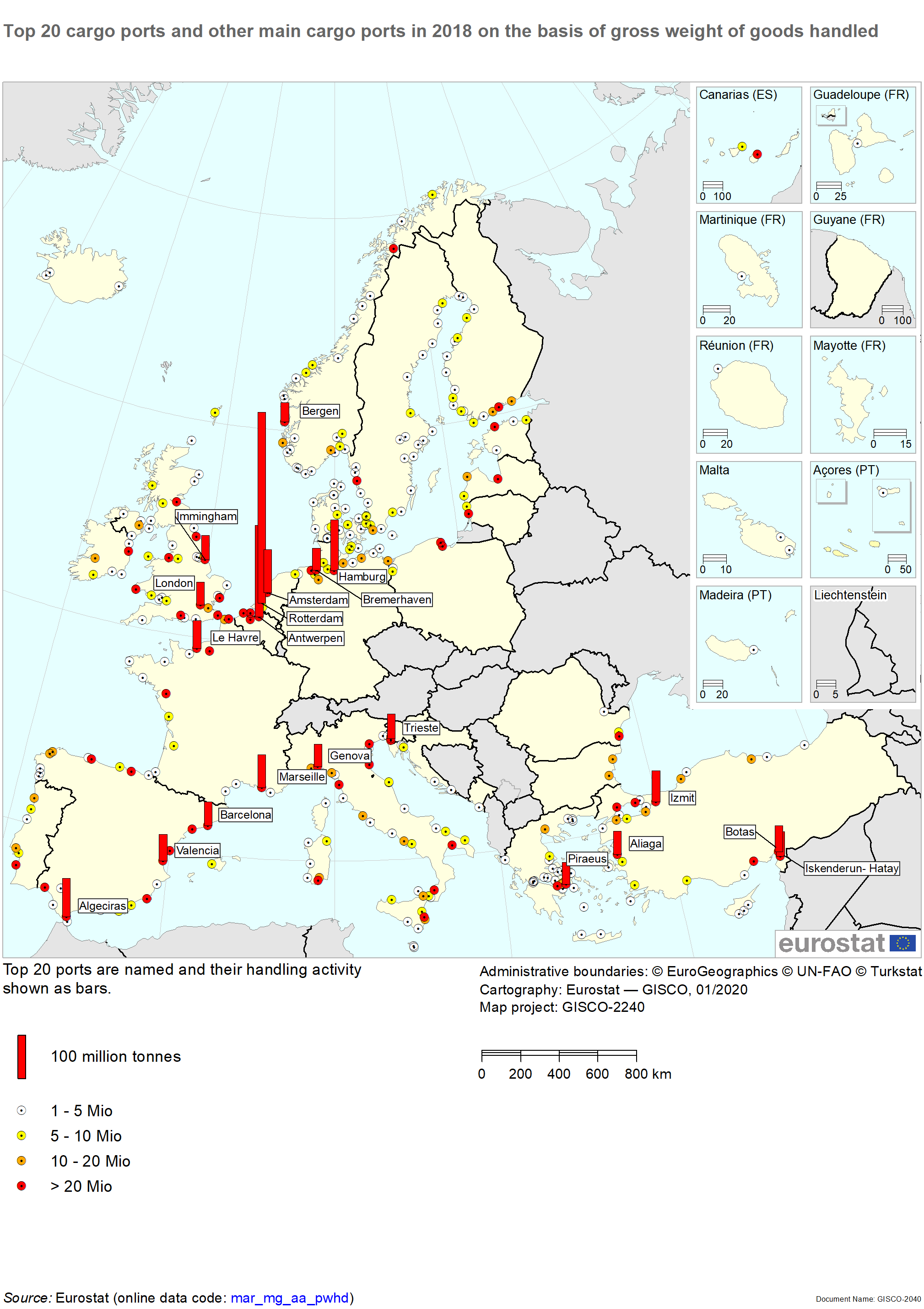 Most EU maritime freight transport is with extra-EU partners

Unlike statistics presented earlier in this article, the data in Table 3 and Figure 6 do not present the total handling of goods in ports (inward movements plus outward movements in the ports), but estimate the seaborne transport of goods between the main European ports and their partner ports. As far as possible, double-counting of the same goods being reported as outward transport in one port and inward transport in another port is excluded in these figures (see data sources). 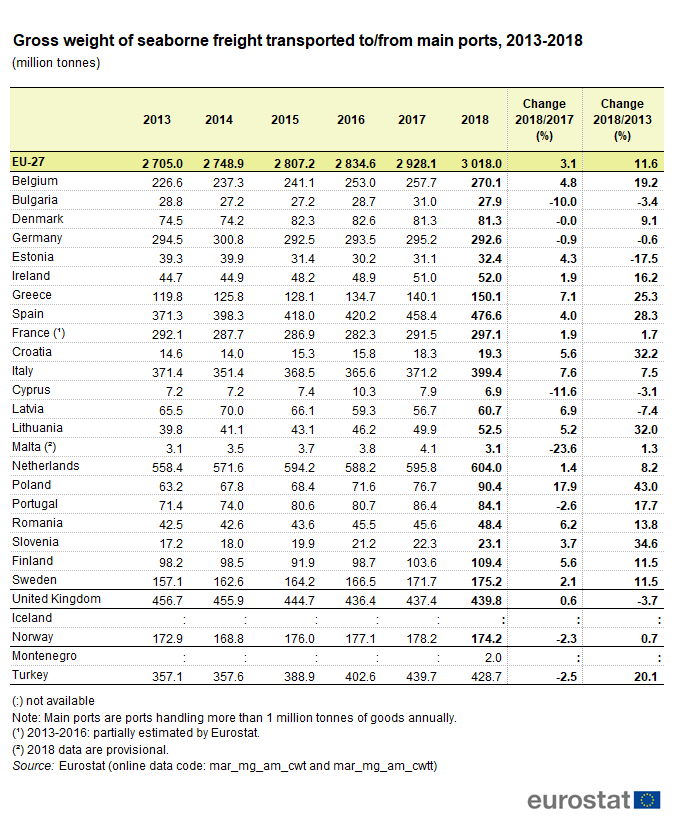 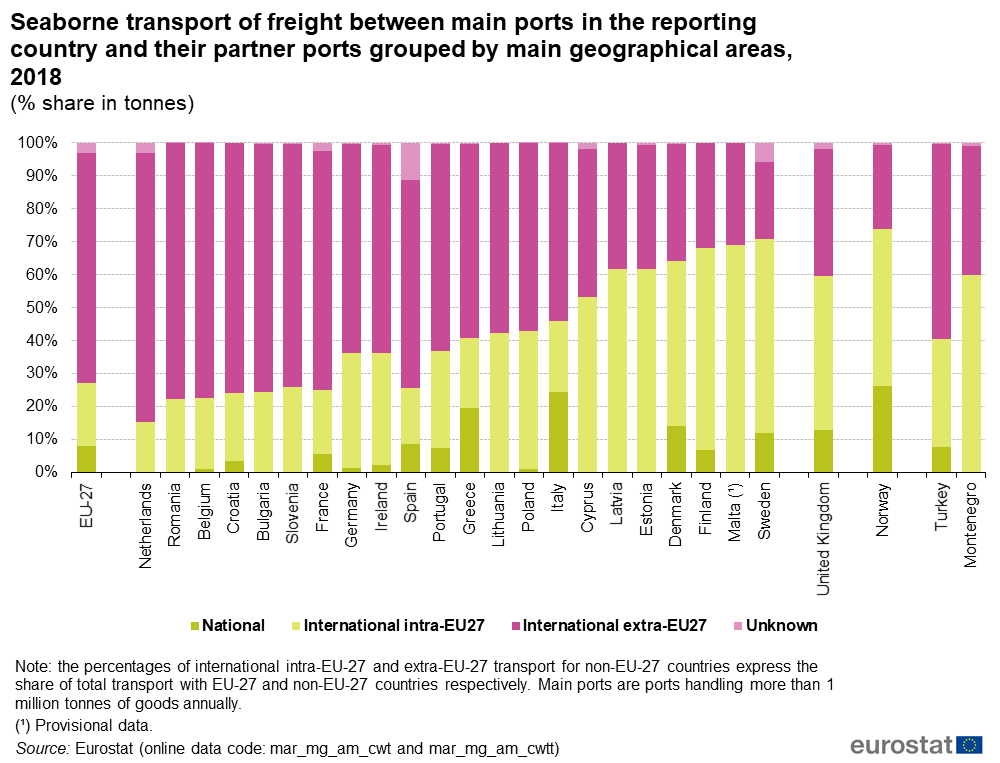 In countries with long shorelines or a large number of islands, like Italy, Greece, Denmark as well as Norway, the share of national seaborne transport tend to be relatively high (from 14 % to 26 %). Countries like Malta, Latvia, Estonia, Finland and Sweden, on the other hand, have high shares of international intra-EU transport (above 58 %), because their main maritime freight transport partners are found within the EU. Other countries, like the Netherlands, Romania, Belgium, Croatia, Bulgaria, Slovenia or France (above 70 %), have high shares of extra-EU transport, based on their geographical position or the "deep sea" nature of the transport activities prevailing in their main ports. 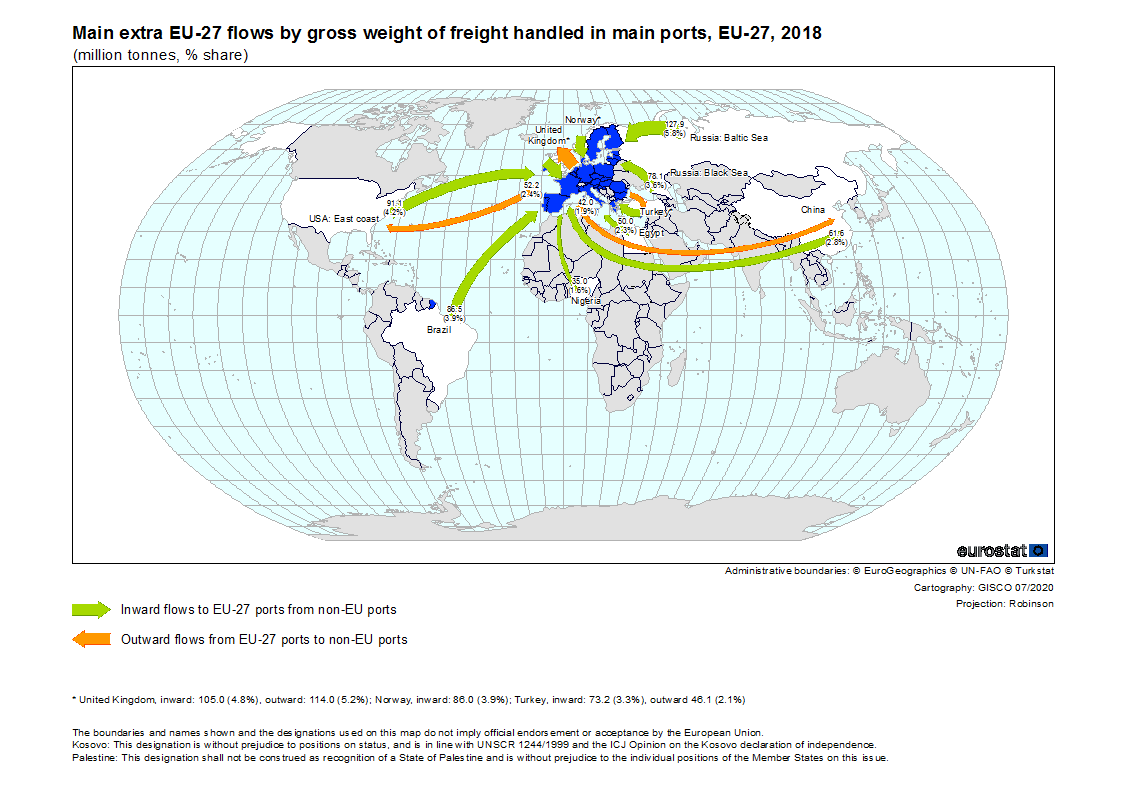 Increase in number of seaborne passengers

The number of passengers passing through EU ports increased by 5.6 % between 2017 and 2018, to almost 410 million passengers (Figure 7). After falling regularly until 2015, the total number of passengers embarking and disembarking in EU ports recovered in the last three years to reach similar levels than in 2008 (+0.2 % in 2018 compared with 2008) (Table 4).

Unlike goods movements, where broadly 60 % of goods are unloaded and 40 % loaded in the EU ports, the difference between the number of passengers disembarking ("inwards") and embarking ("outwards") in EU ports is generally small. This reflects the fact that seaborne passenger transport in Europe is mainly carried by national or intra-EU ferry services, with the same passengers being counted twice in the port throughput statistics (once when they embark the ferry in one EU port and once when they disembark the same ferry in another EU port). 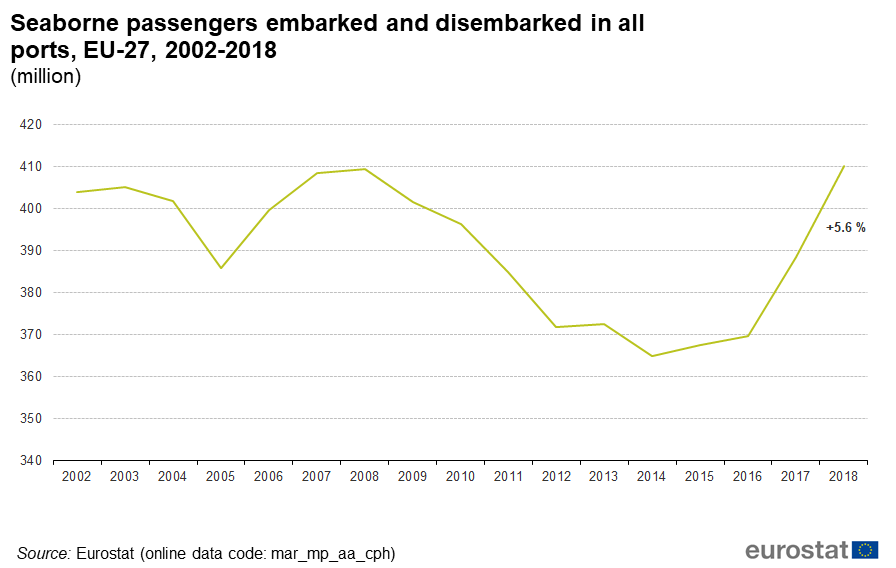 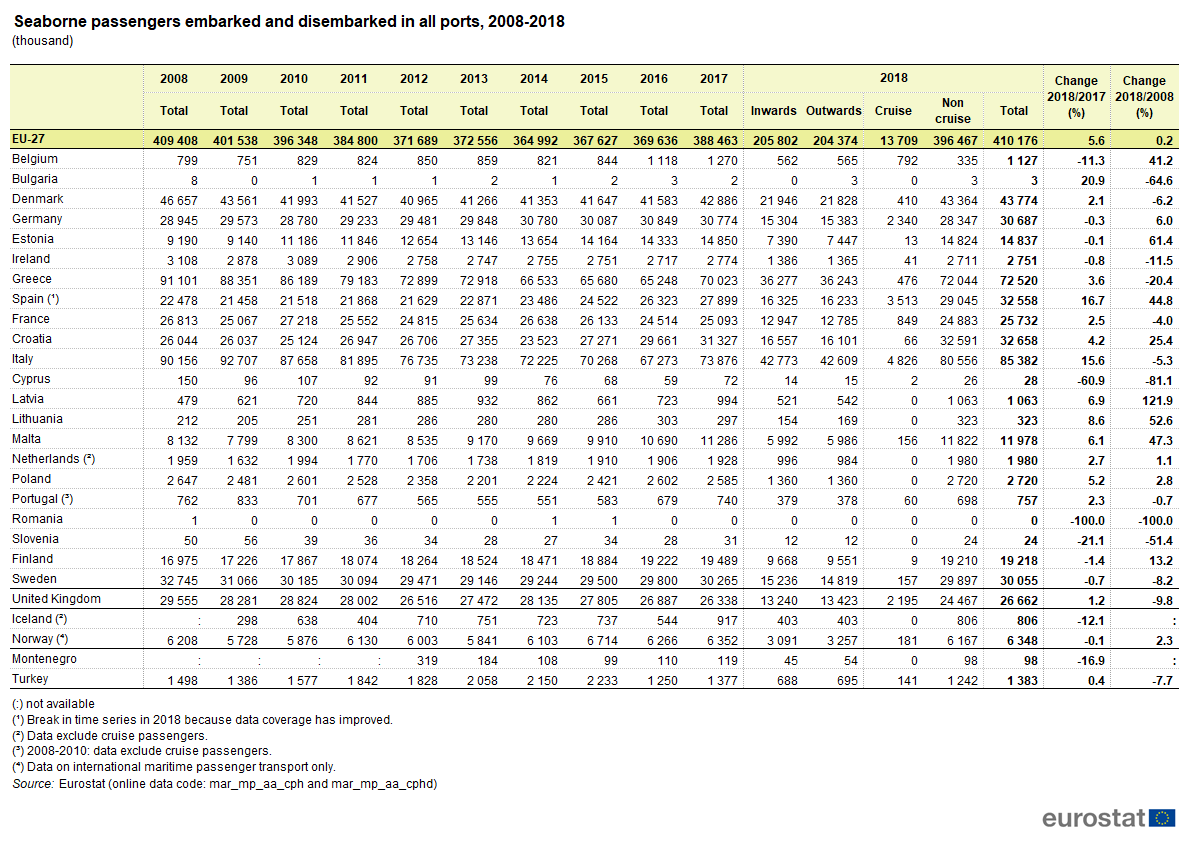 Dover was the largest European passenger port in 2018 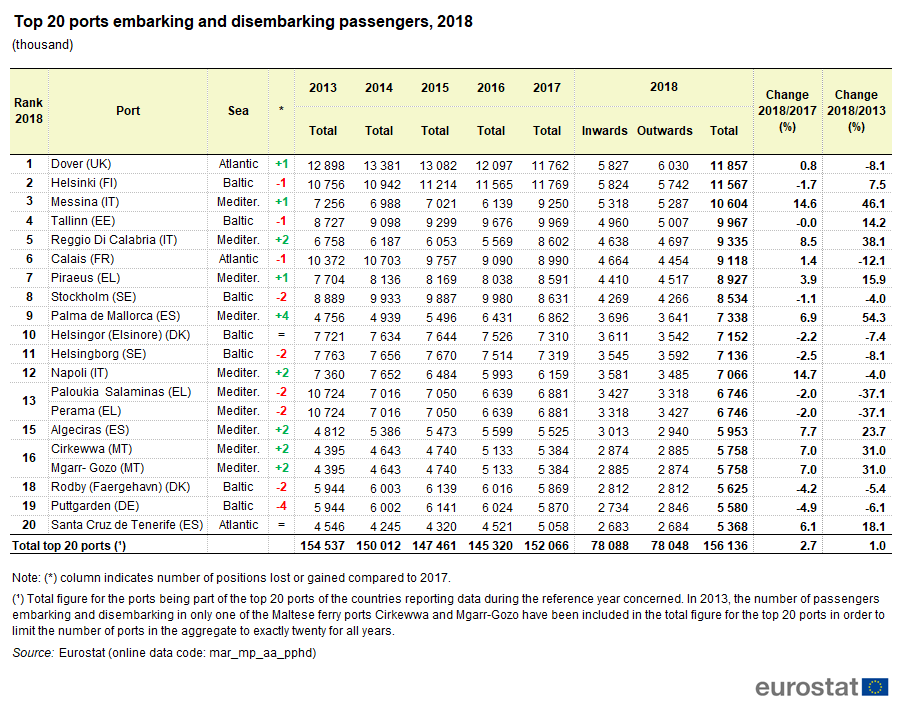 Most EU seaborne passenger transport is within national borders

Table 6 and Figure 8 show the breakdown of seaborne passenger transport between national, international intra-EU and international extra-EU transport for each reporting country (excluding cruise passengers). Unlike the statistics presented in tables 4 and 5, these figures do not reflect the sum of embarkation and disembarkation of passengers in ports, but estimate the transport of passengers between ports. As far as possible, double-counting of the same passengers being reported as embarking in one port and disembarking in another port within the same statistical aggregate is excluded in these figures (see data sources). 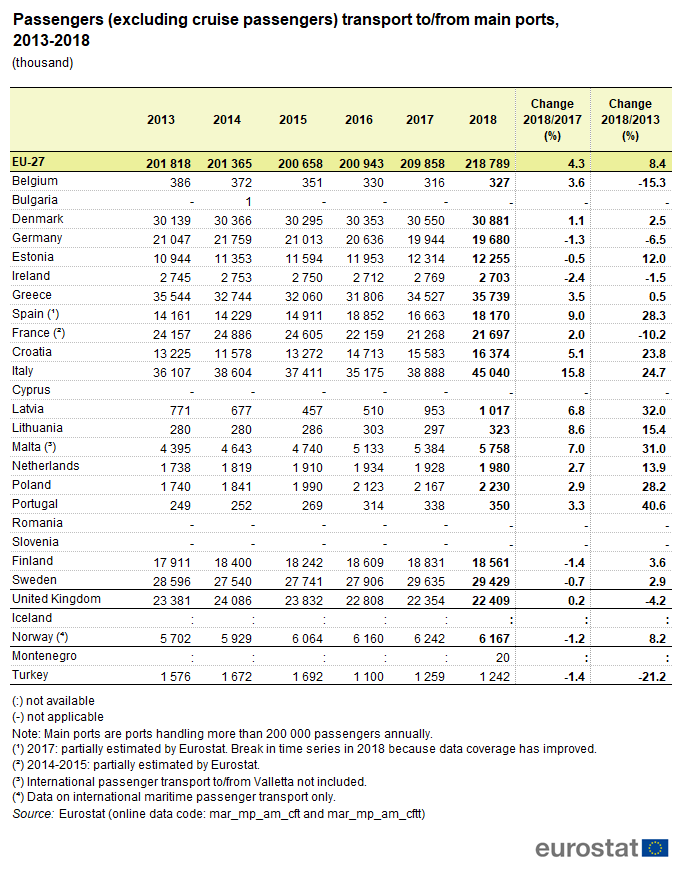 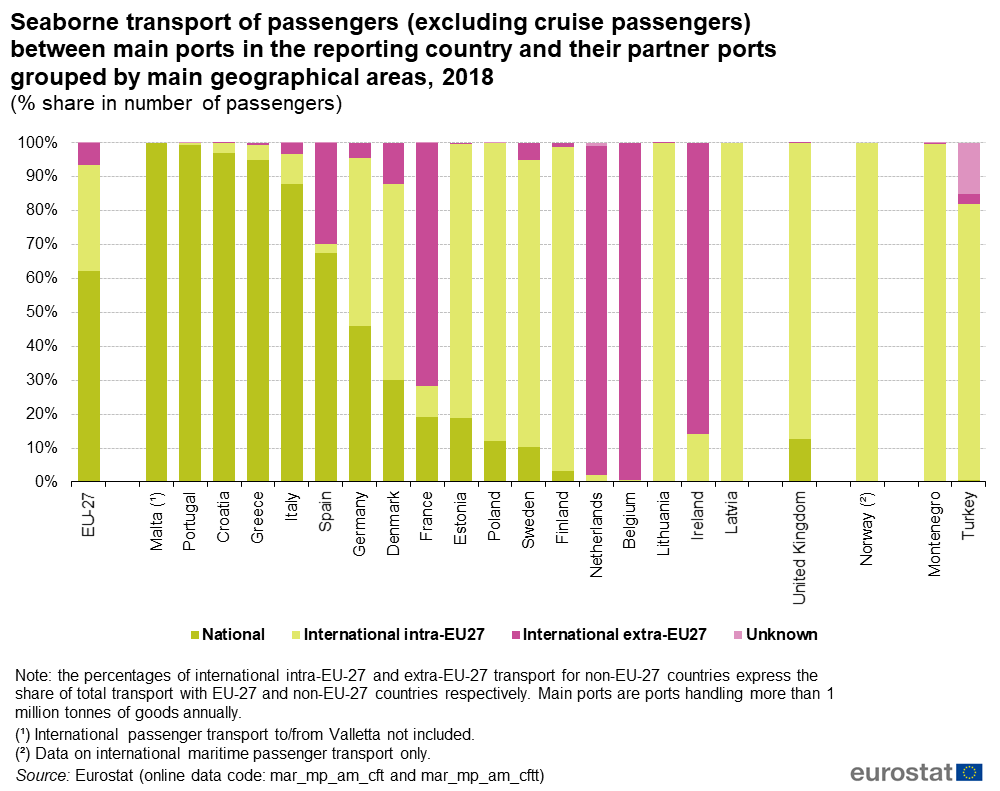 Countries with ferry connections to other EU countries, such as Latvia, Lithuania, Finland, Poland, Sweden, Estonia and Denmark, naturally have high shares of international intra-EU transport. Belgium, the Netherlands, Ireland, France and Spain recorded the highest shares of extra-EU seaborne passenger transport in 2018, with Spain having ferry links with Morocco and the other countries with the United Kingdom. 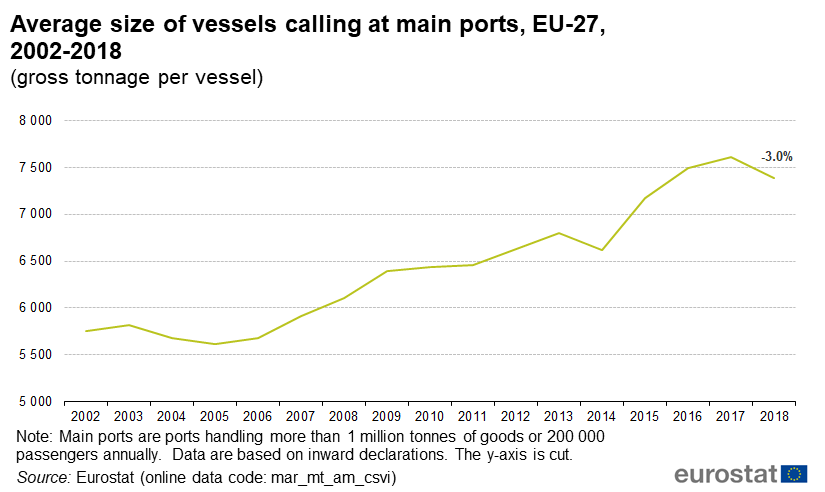 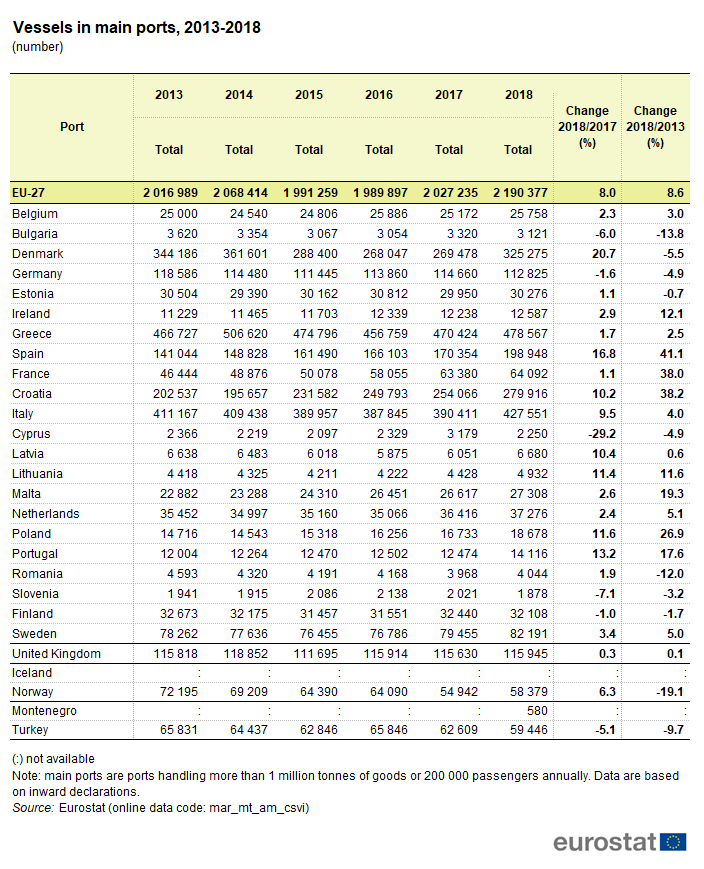 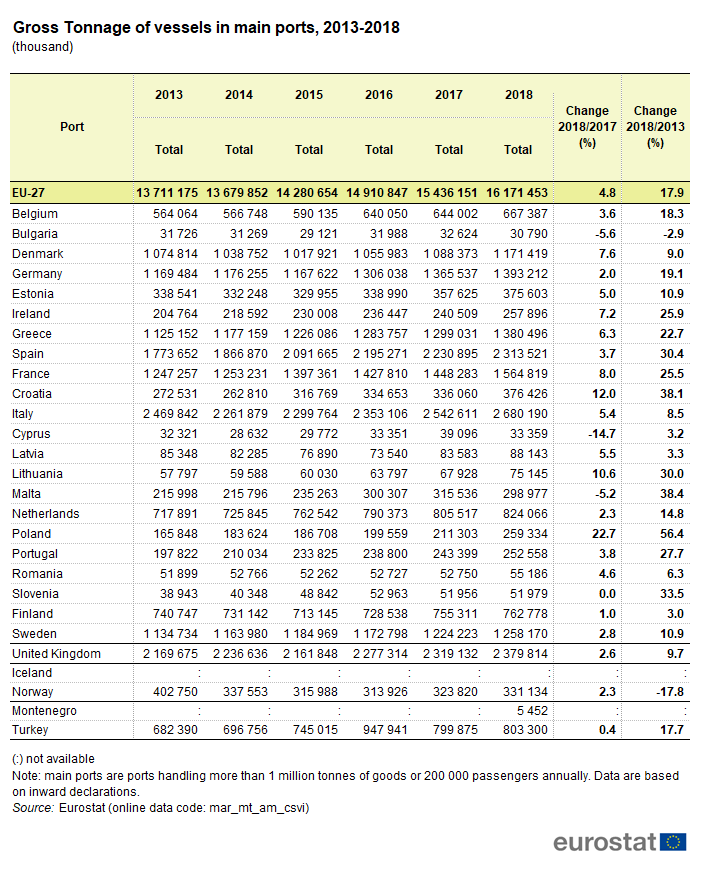 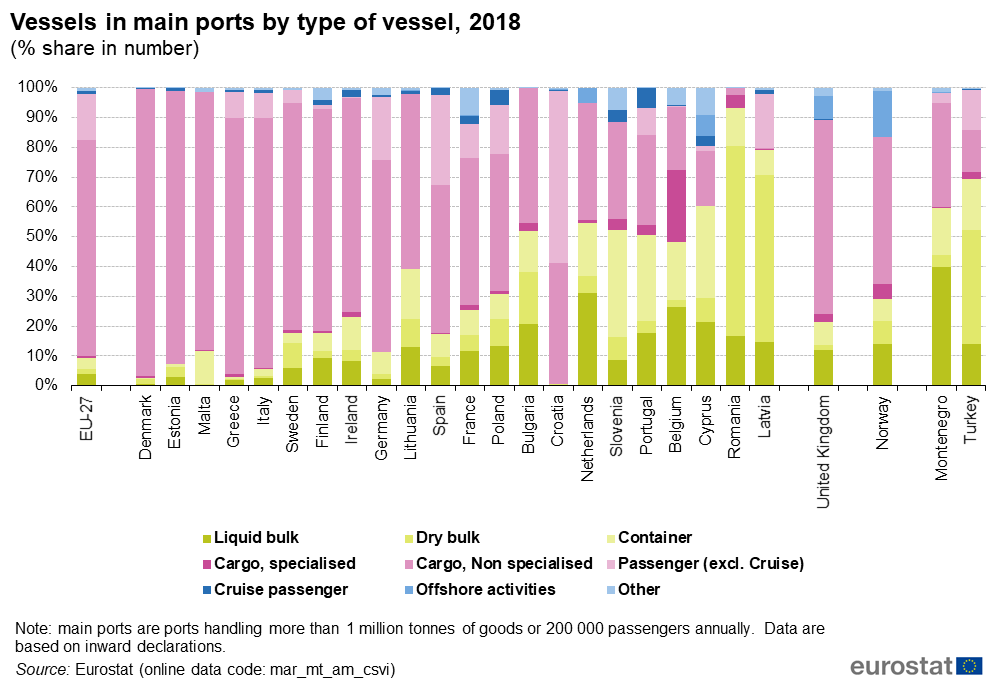 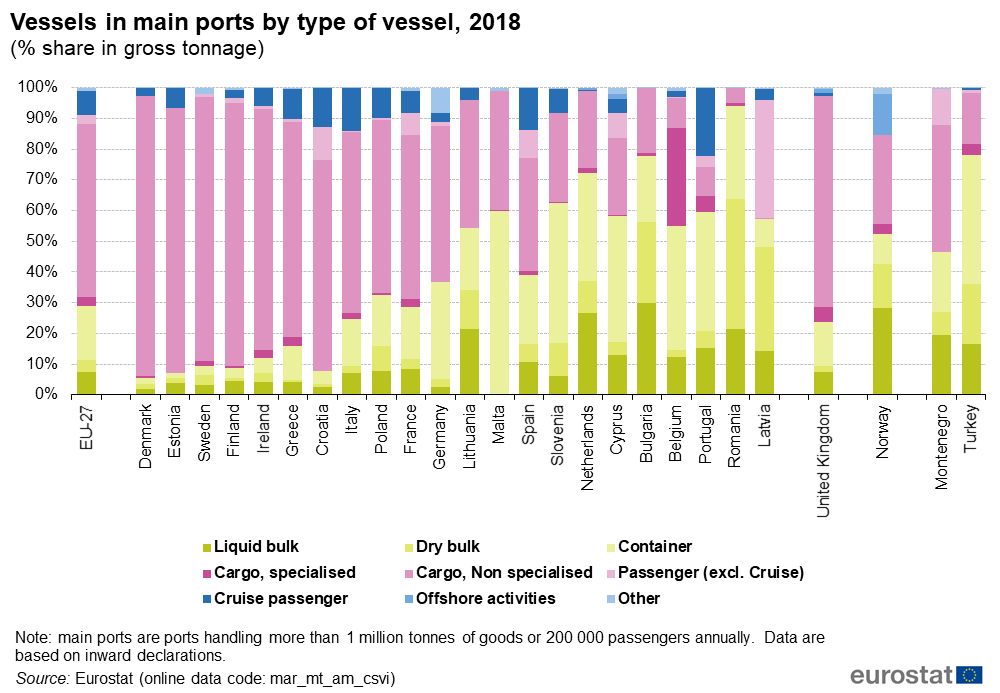 This article presents the trends in freight and passenger transport in European Union (EU) ports and also includes figures for the United Kingdom, Iceland, Norway, Montenegro and Turkey. The content is based on data collected within the legal framework for EU maritime transport statistics, i.e. Directive 2009/42/EC of the European Parliament and of the Council of 6 May 2009 on statistical returns in respect of carriage of goods and passengers by sea and later amendments. Directive 2009/42/EC is a recast of the original Council Directive 95/64/EC of 8 December 1995.

The EU-27 aggregates in the statistics refer to the total of 22 maritime Member States. The Czechia, Luxembourg, Hungary, Austria and Slovakia have no maritime ports. Norway and Iceland provide Eurostat with data as members of the European Economic Area (EEA). The EEA country Liechtenstein has no maritime ports. Montenegro and Turkey provide data as candidate countries.

“Main ports” are ports handling more than 1 million tonnes of goods or more than 200 000 passengers annually (however, data for some smaller ports may be included in the published results). Data are presented at level of “statistical ports”. A statistical port consists of one or more ports, normally controlled by a single port authority, able to record ship and cargo movements.

Basic results and derived indicators (such as growth rates and shares in % of total) in the tables are rounded. However, the figures are based on the non-rounded original data. As a result, the sum of shares in % of total, as shown in the tables, is not necessarily equal to 100%. 2018 freight data reported by Malta are provisional and likely to be revised.

Figures 1, 2, 3 and 4: Starting from 2011, the figures for Spain include data for a number of minor regional ports outside the state-controlled port system. Turkey started to report data on seaborne transport in 2008 and Montenegro in 2012. Data have been partially estimated by Eurostat for a number of French ports for the period 2009-2016.

The category “large containers” includes containers having a length of 20 feet or more. Smaller containers are included in the category “other cargo”. As a general rule, the container figures are limited to lift-on lift-off containers (Lo-Lo).

Data are not available for Iceland.

Table 5: Data include (cruise and non-cruise) passengers starting and ending a voyage. Cruise passengers on excursion in ports (cruise transit) are excluded.

Table 6 and Figure 8: See note for Table 3 above. 2016 data for Spanish ports include cruise passengers. Starting from 2018, the figures for Spain include data for a number ports that were not reported in the previous years. French data for 2014 and 2015 contain Eurostat estimates. Passenger transport data for Malta do not include international transport to/from the port of Valletta. Passenger data for Norway cover international traffic only. Data are not available for Iceland.

Special symbols used in the tables

The content of this statistical article is based on data collected within the framework of the EU maritime transport statistics Directive, i.e. Directive 2009/42/EC of the European Parliament and of the Council of 6 May 2009 on statistical returns in respect of carriage of goods and passengers by sea (OJ L141 of 6.6.2009, page 29), which is a recast of the original Council Directive 95/64 (EC) of 8 December 1995.

The following legal acts include respectively the last official version of the list of ports and some dissemination aspects: