Germany, Italy, France and Austria contributed to over 70 % of the value added by EU enterprises manufacturing sporting goods in 2019.

This article presents data on enterprises active in the NACE sector ’Manufacturing of sports goods’ in the European Union (EU) collected to provide structural business statistics (SBS), while the data on the production of sporting goods are collected under the PRODCOM survey.

Of the economic activities covered by structural business statistics, only one NACE group relates exclusively to sport – 32.3 ’Manufacturing of sports goods’. It includes manufacturing of the following articles and equipment for sports and outdoor and indoor games (excluding clothing and footwear):

Not all sporting goods are produced by businesses included in this NACE sector. Data on production, presented in the second part of the article, cover a larger scope of products (e.g. boats, footwear, etc.). Nevertheless, data on businesses are available only for NACE group 32.3.

In 2019, in the European Union (EU) overall, the sector that produced sporting goods generated €2.2 billion in value added, while its turnover (the total value of market sales of goods and services) totalled around €7 billion (see Table 1).

France, Czechia, Germany and Poland accounted for almost half of the total number of enterprises that produce sporting goods in the EU (no data available for Ireland and Malta), exceeding a share of 10 % of the EU total of such enterprises. For three countries (Slovakia, Belgium and Estonia) the percentage was less than 1 %, while two (Cyprus and Luxembourg) did not report any data on enterprises in this sector.

As for turnover generated by enterprises that manufacture sporting goods, over 20 % of the EU total was recorded in Italy. The other main shares belonged to the same EU Member States as for value added – France (19.2 %), Germany (17.1 %) and Austria (15.7 %). 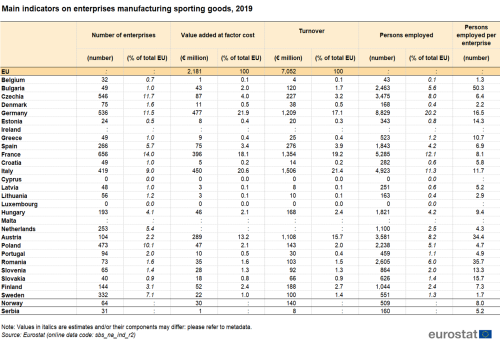 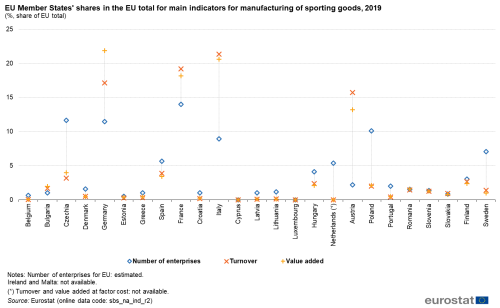 Table 2 shows how the sector for producing sporting goods performed in terms of number of enterprises and value added in 2019 (the last available year) compared with 2014, in relation to the total non-financial economy. The trends are shown through annual average rates of change (AAGR, often referred to as compound rates of change) for both indicators. A rather small sector for manufacturing of sporting goods could have more variations than the total number of enterprises of the non-financial business economy. 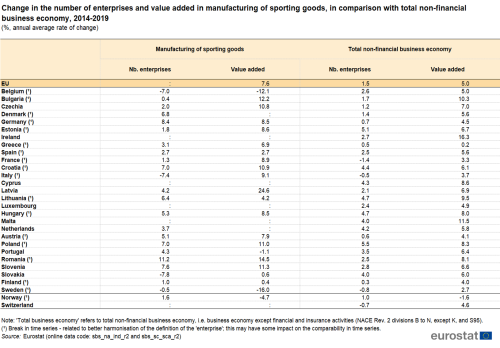 Table 2: Change in the number of enterprises and value added in manufacturing of sporting goods, in comparison with total non-financial business economy, 2014-2019 (%, annual average rate of change)
Source: Eurostat (sbs_na_ind_r2) and (sbs_sc_sca_r2) 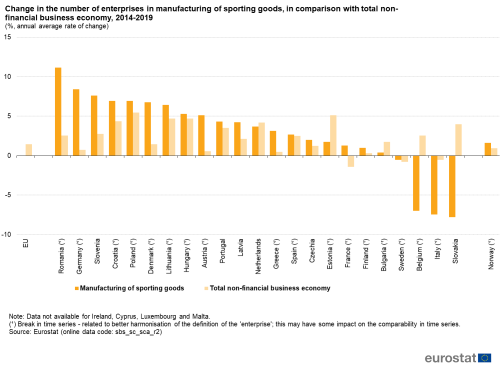 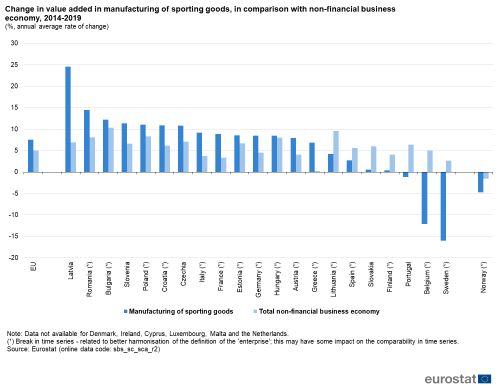 Prodcom provides statistics on the production of manufactured goods. It uses the product codes specified in the Prodcom list, which contains around 3,900 different manufactured products. There are two concepts of production currently used in Prodcom:

The Prodcom codes, included in Table 3, are all relevant for sporting goods. They are listed under corresponding NACE groups (at 3-digit level), not only under NACE code 32.3 (‘Manufacturing of sports goods’ – sector analysed above) but also within other manufacturing activities, e.g. building of ships and boats (NACE 30.1) or manufacturing of footwear (NACE 15.2). 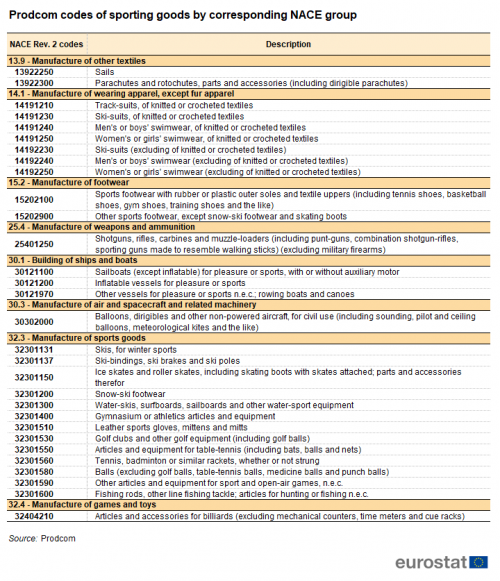 The Prodcom ’sporting’ codes can be grouped into eight broad headings based on their corresponding NACE groups (see Figure 4). In 2020, in the EU, two NACE groups covered three quarters of the production value for all sporting goods that were sold:

Two other NACE groups each accounted for more than 5 % of the total: 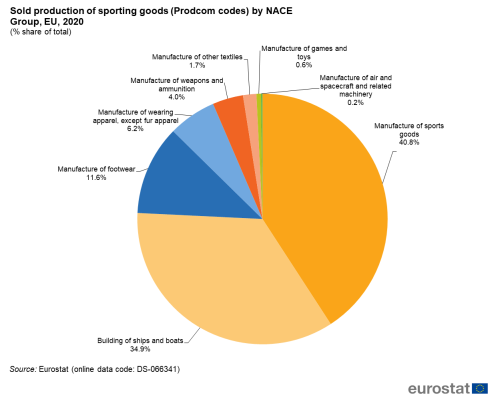 In 2020 (the year for which the most recent data are available), in the EU, the value of sporting goods produced and sold (30 Prodcom codes) was €8.3 billion, an average annual change of 5.2 % since 2015 (see Table 4). Sold production for two codes exceeded €1 billion and together accounted for more than 40 % of the total of manufacturing of sporting goods: 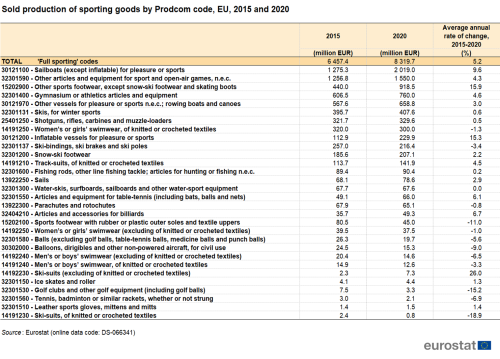 At EU level, the average annual rate of change in the production of sporting goods between 2015 and 2020 was positive for 17 products out of 30. The highest increases were recorded for:

In addition, three more products grew faster than the total sporting goods annual rate (+5.2 %). Among the 13 categories with a negative rate of change between 2015 and 2020, the highest decreases were reported for:

The identification of the list of sporting goods is based on:

Structural business statistics (SBS) cover industry, construction, trade and (market) services, as defined by the statistical classification of economic activities in the European Community (NACE). This classification allows for a detailed breakdown of business activities sector by sector: the information is available for a broad range of structural indicators (e.g. the number of enterprises, the number of persons employed, turnover and value added) and may also be analysed according to enterprise size. Since 2008, the version of NACE used in the European statistical system has been NACE Rev. 2.

Within the context of SBS, the following definitions apply:

Alternatively, it can be calculated from the gross operating surplus by adding personnel costs.

The PRODCOM survey aims to provide a full picture at EU level of developments in industrial production for a given product or for an industry in a comparable manner across countries. This objective has became more important since the single market was established in 1992. The Prodcom list is updated every year by the Prodcom Expert Group. The list’s headings are linked to those from the Combined nomenclature (CN) used to compile statistics on international trade in goods statistics, therefore enabling direct comparisons between industrial production statistics and trade statistics. Prodcom headings are coded using an eight-digit numerical code, the first six digits of which are identical to those of the Statistical classification of products by activity (CPA) code. Prodcom statistics are broken down to a detail level of almost 3,900 products. The main indicators of the production sold during the calendar year are collected and published in both monetary (€) and physical (kg, size, number of items, etc.) terms.

A number of expert groups have been set up to achieve concrete results. Among them, the Expert Group ’Sport and economics’ (XG ECO) and the Expert Group on Health-Enhancing Physical Activity (XG HEPA) play a key role in implementing evidence-based policies in the sports sector. XG ECO has, for example, produced the economic definition of sport (see ’Vilnius definition’ below), and made progress on developing sport satellite accounts in some EU countries. XG HEPA concentrates on implementing the Council recommendations on physical activity adopted in 2013. These include a monitoring framework with indicators both on physical activity level and on policies to promote physical activity throughout the EU.