Computer, electronic & optical products and crude petroleum & natural gas were the most imported products by the EU every year between 2016 and 2020.

The article is part of an online publication providing recent statistics on international trade in goods, covering information on the EU's main partners, main products traded, specific characteristics of trade as well as background information.

The CPA classification consists of 40 products. The 24 most imported products (with a value of more than EUR 10 billion in 2020) are shown in Table 1, while the other 16 are grouped as "Other". Due to the Covid-19 pandemic, imports for 18 of the 24 most imported products decreased in 2020, however there was a notable increase of 67 % for textiles (CPA group 13) which includes face masks. 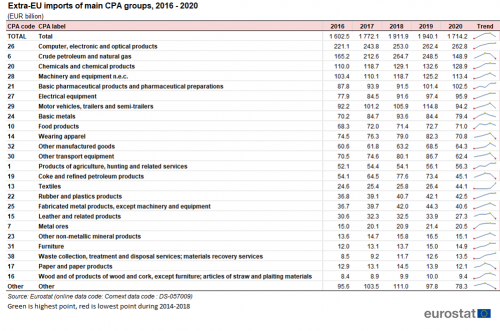 The composition of total EU imports of goods in 2020 for the 24 CPA groups in Table 1 is shown in Figure 1. The most imported product is, 'Computer, electronic and optical products' (computers) with 15.3 %. Following at a distance, the next four products are 'Crude petroleum and natural gas' (oil & gas) with 8.7 %, 'Chemicals and chemical products' (chemicals) with 7.5 %, 'Machinery and equipment n.e.c' (machines) with 6.6% and 'Basic pharmaceutical products' (pharmaceuticals), with 6.0 %. It is on these five product groups that the rest of the article will concentrate. 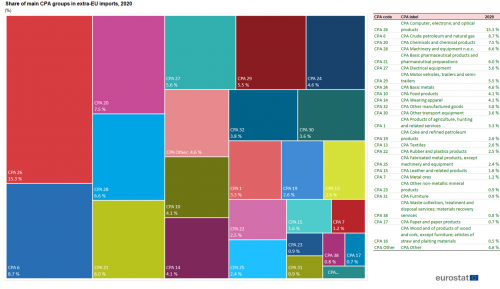 The 4 top product groups from 2020 were continuously in the top 4 from 2016 to 2020. Throughout the whole period, the same product groups occupied the top two places, namely computers and oil & gas. They switched top position in 2018 and 2019 mainly due to changing prices for crude petroleum. Chemicals and machines were third and fourth throughout the period while pharmaceuticals entered the top five in 2020, replacing motor vehicles. 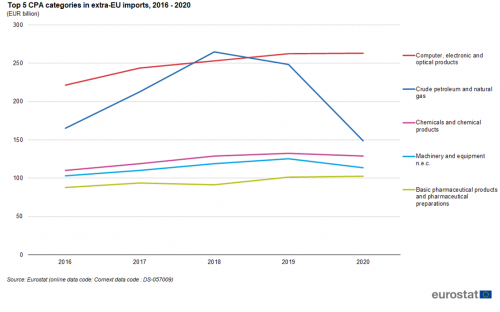 In 2020, the Netherlands was the largest importer of computers in the EU. Its imports of EUR 92 billion were 34.9 % of total EU imports from countries outside the EU. The high value of the Netherlands is partly due to quasi-transit trade. Germany (EUR 59 billion, 22.6 % of total EU imports) was the second largest importer. There were four Member States where the share of computers in their total imports from countries outside the EU was above 20 %. These were Czechia (45.1 %), the Netherlands (30.1 %), Hungary (27.2 %) and Slovakia (20.7 %). 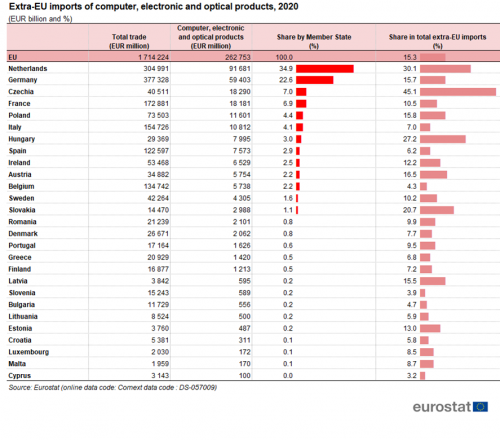 In 2020, the Netherlands was the largest importer of petroleum in the EU. Its imports of EUR 25 billion were 16.9 % of total EU imports from countries outside the EU. Italy (EUR 23 billion, 15.3 % of total EU imports) was the second largest importer. There were three Member States where the share of petroleum in their total imports from countries outside the EU was above 20 %. These were Greece (32.4 %), Lithuania (28.4 %), and Portugal (25.0 %). 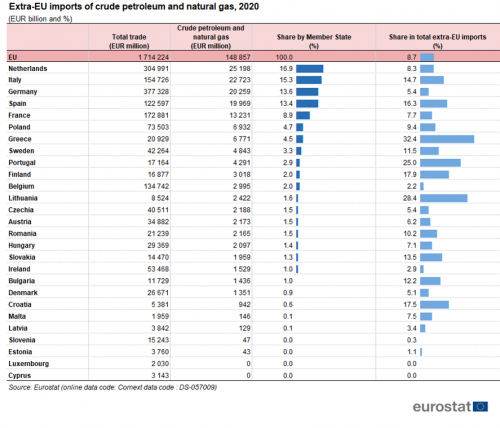 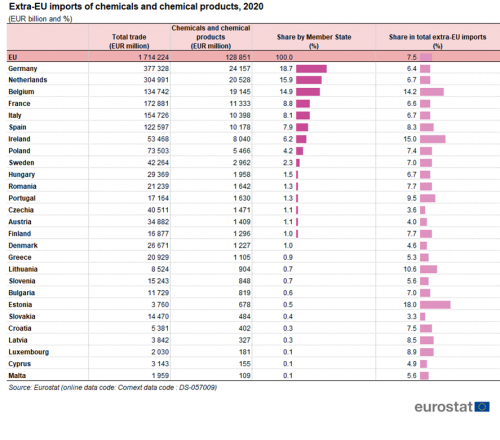 In 2020, Germany was the largest importer of machines in the EU. Its imports of EUR 31 billion were 27.3 % of total EU imports from countries outside the EU. The Netherlands (EUR 16 billion, 14.0 % of total EU imports) was the second largest importer. There was one Member State where the share of machines in their total imports from countries outside the EU was above 10 %. This was Luxembourg (19.0 %). 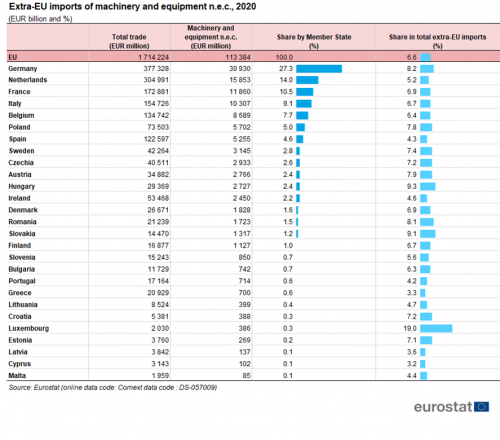 In 2020, Germany was the largest importer of pharmaceuticals in the EU. Its imports of EUR 22 billion were 21.2 % of total EU imports from countries outside the EU. The Netherlands (EUR 18 billion, 17.8 % of total EU imports) was the second largest importer. There were five Member States where the share of pharmaceuticals in their total imports from countries outside the EU was above 10 %. These were Slovenia (29.4 %), Belgium (13.1 %), Ireland, Austria (both 11.5 %) and Malta (10.6 %). 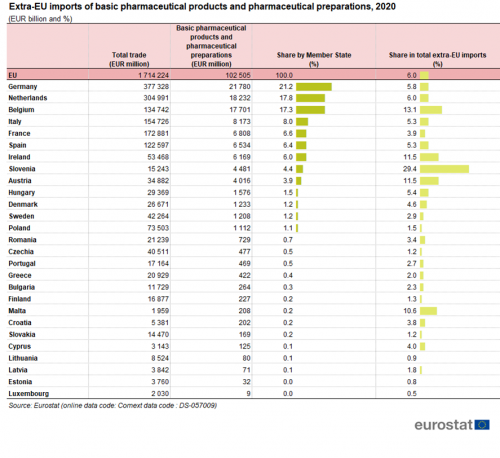 According to the EU concepts and definitions, extra-EU trade statistics (trade between EU Member States and non-EU countries) do not record exchanges involving goods in transit, placed in a customs warehouse or given temporary admission (for trade fairs, temporary exhibitions, tests, etc.). This is known as ‘special trade’. The partner is the country of final destination of the goods for imports and the country of origin for imports.

Trade values are expressed in millions or billions (109) of euros. They correspond to the statistical value, i.e. to the amount which would be invoiced in the event of sale or purchase at the national border of the reporting country. It is called a FOB value (free on board) for imports and a CIF value (cost, insurance, freight) for imports.

Trade is an important indicator of Europe’s prosperity and place in the world. The bloc is deeply integrated into global markets both for the products it sources and the imports it sells. The EU trade policy is an important element of the external dimension of the ‘Europe 2020 strategy for smart, sustainable and inclusive growth’ and is one of the main pillars of the EU’s relations with the rest of the world.