Tweet
The labour force in 2019: almost 200 million Europeans were employed and around 14 million were unemployed.
Tweet
The share of self-employed persons in the EU varied significantly in 2019, from 29% in Greece to 8% in Luxembourg and Denmark.
Tweet
In 2019 in the EU, one in four self-employed persons with employees was female. 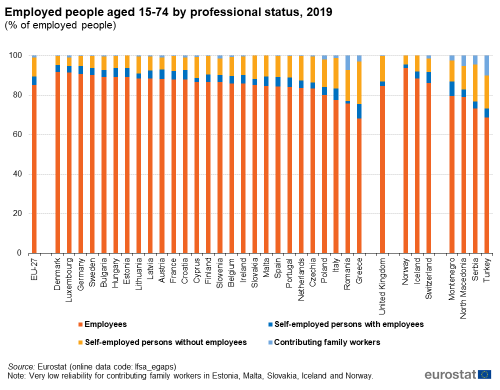 This article gives an overview of the main features of the labour force, which includes employed and unemployed people. It then focuses on the male and female employed population aged 15-74 and their professional status, i.e. employees, self-employed and contributing family workers.

It is based on the results from the European Union Labour force survey (EU-LFS) for the European Union (EU) as a whole, for all EU Member States individually, as well as for the United Kingdom, three EFTA countries (Iceland, Norway and Switzerland) and four candidate countries (Montenegro, North Macedonia, Serbia and Turkey).

The umbrella of the labour force

In the labour force, 199.4 million persons were in employment , while 14.4 million were unemployed. Furthermore, among employed persons, 169.5 million, which constitutes the vast majority, were employees while 28.0 million were self-employed with or without employees and 2.0 million were family workers.

Figures for the above-mentioned sub-populations for the year 2019 for the EU-27 as a whole are displayed in Infographic 1, which also presents the corresponding figures for each Member State, the United Kingdom and each EFTA and candidate country conducting the European Union Labour Force Survey (EU-LFS), i.e. Iceland, Norway, Switzerland, Montenegro, North Macedonia, Serbia and Turkey. 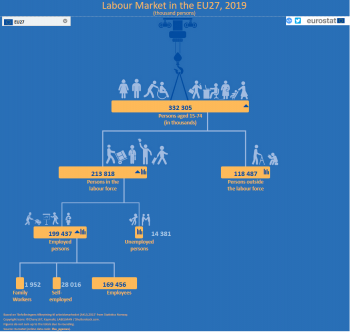 Infographic 1: Labour market in the EU, 2019
Click on the image for an interactive view of the data. Click on the arrow icons to expand the bars.

Majority of employed people are employees

Out of all the people in employment in 2019, the vast majority are employees, 85.0 % of the EU-27 population aged 15-74 (Figure 1). In all EU Member States, employees outnumber self-employed persons by a wide margin. In 2019, five countries had more than nine employees out of ten employed people (Denmark, Luxembourg, Germany and Sweden as well as the EFTA country Norway). By contrast, the share of employees in the employed population was below 75 percent in Greece, as well as in the candidate countries Serbia and Turkey. 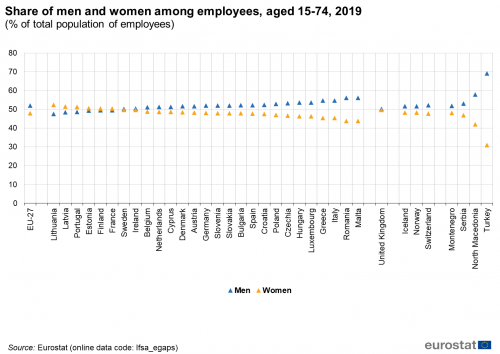 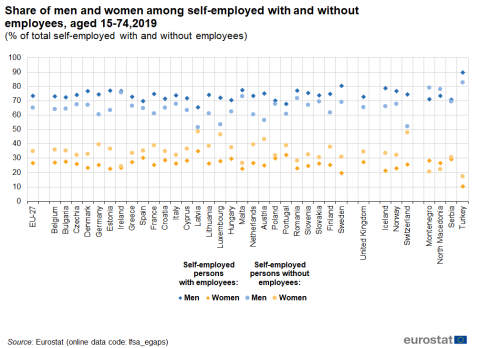 Employment covers persons aged 15 years and over (16 and over in Spain and Italy, 15-74 years in Estonia, Latvia, Hungary, Finland, Sweden, Norway and Denmark, and 16-74 years in Iceland), living in private households, who during the reference week performed work, even for just one hour, for pay, profit or family gain, or were not at work but had a job or business from which they were temporarily absent, for example because of illness, holidays, industrial dispute or education and training.

Main concepts: Some main employment characteristics, as defined by the EU LFS, include:

In November 2017, the European Pillar of Social Rights has been jointly signed by the European Parliament, the Council and the Commission. Employment and social policies are the main fields of interest of the European Pillar of Social Rights, which is about delivering new and more effective rights for citizens. It has 3 main categories: (1) Equal opportunities and access to the labour market, (2) Fair working conditions and (3) Social protection and inclusion. In particular, today's more flexible working arrangements provide new job opportunities especially for the young but can potentially give rise to new precariousness and inequalities. Building a fairer Europe and strengthening its social dimension is a key priority for the Commission. The European Pillar of Social Rights is accompanied by a ‘social scoreboard’ which will monitor the implementation of the Pillar by tracking trends and performances across EU countries in 12 areas and will feed into the European Semester of economic policy coordination. The scoreboard will also serve to assess progress towards a social ‘triple A’ for the EU as a whole.