Highlights
Tweet
In 2019, one in six part-time workers in the EU (16.9 %) would have preferred to work more.
Tweet
At EU level, persons available to work but not searching for it accounted for 5.6 % of the population outside the labour force in 2019, while persons seeking work but not immediately available stood at 1.6 %.
Tweet
The labour market slack in the EU amounted to 13.2 % of the extended labour force, more than double the unemployment, which accounted for 6.4 % of the extended labour force in 2019. 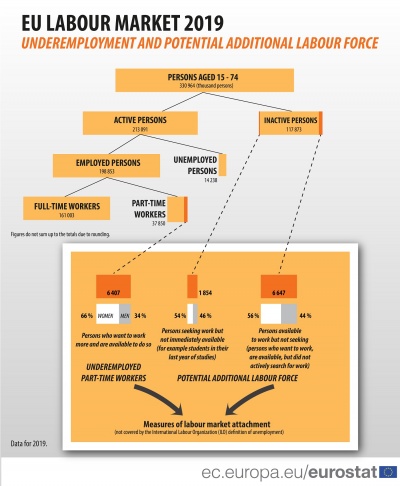 In order to supplement the unemployment figures, this article focuses on people in categories that are not unemployed according to the ILO definition but may have an unmet need for employment, being either inside or outside the labour force. More precisely, this article reports on underemployed people, those working part-time but who wish to work more, as well as on people who might be associated to the labour force, because of their availability to work or their work search, but who are not recorded as such. The analyses cover the situation in the European Union (EU) and in the Member States. The article concludes with a presentation of the entire labour market slack including these three supplementary categories in addition to the unemployment. Consequently, it nicely complements the article on unemployment statistics.

Overview of the underemployed and the potential additional labour force

A graphical description of the populations included in the indicators supplementing the unemployment rate, with their absolute and relative sizes at EU level in 2019, is presented in the infographic. It also shows their relation to the other main groups covered by the Labour Force Survey. The 6.4 million underemployed part-time workers are a sub-population of the 37.9 million part-time workers. The 8.5 million persons in the potential additional labour force are a sub-population of the 117.9 million persons outside the labour force.

The last two groups are jointly referred to as the potential additional labour force. All three groups together are referred to as supplementary indicators to unemployment. These three groups do not meet the full criteria of the ILO unemployment definition i.e. being without work, actively seeking work, and being available for work. However, while not being captured through the unemployment rate, these groups might still represent a form of employment demand. While underemployed part-time workers are part of the labour force, the two other groups (persons seeking work but not immediately available and persons available to work but not seeking) are part of the population outside the labour force. These supplementary indicators complement the unemployment and provide a more complete picture of the labour market.

14.2 million unemployed and another 14.9 million persons with some unemployment characteristics

In total 14.9 million persons experienced some resemblance to unemployment in the EU-27 in 2019, without fulfilling the ILO criteria for being unemployed. It actually exceeds the 14.2 million who were unemployed according to the ILO criteria.

Unemployment changes substantially over time, but the number of people seeking work but not immediately available is stable 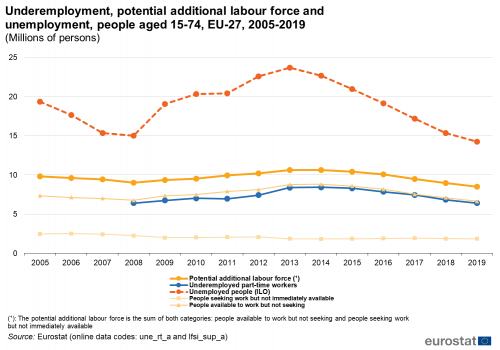 Nevertheless, the split of the potential additional labour force into the two sub groups showed some differences over time (see Figure 1, finest lines): those who seek work but are not immediately available to work dropped continuously from 2.5 million in 2005 to 1.8 million in 2013 and slightly went up to 1.9 million between 2016 and 2019 while the persons available to work but who are not seeking it fluctuated from 7.3 million persons in 2005 to 8.8 million in 2013-2014 and dropping to 6.6 million persons in 2019, following a similar pattern to the number of unemployed persons. 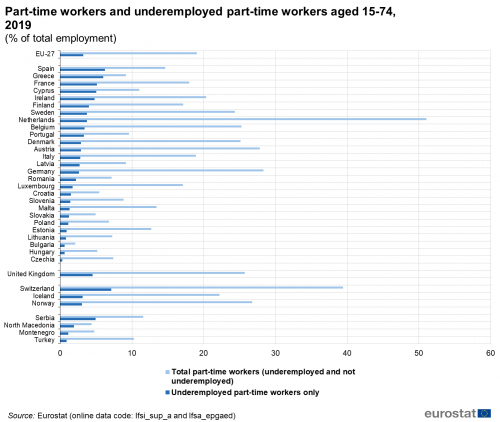 All countries apart from Lithuania follow the same main pattern clearly visible in Figure 3: people available but not seeking work outnumber those seeking work but not immediately available.

Inside the potential additional labour force, there are also notable differences between countries. For instance, there were exceptionally few in the population outside the labour force who were available to work but not seeking a job in Czechia (1.2 %), Lithuania (1.4 %) and Slovenia (1.7 %), whereas these are relatively more numerous in Italy (14.7 %) and Estonia (10.4 %). Also the share of those who are seeking work but not immediately available varies greatly across countries: their proportion is relatively high in Sweden (5.8 %), Finland (4.7 %) and the Netherlands (4.0 %), while they are almost non-existent in Hungary, Malta and Czechia (all three reaching 0.5 % or less). 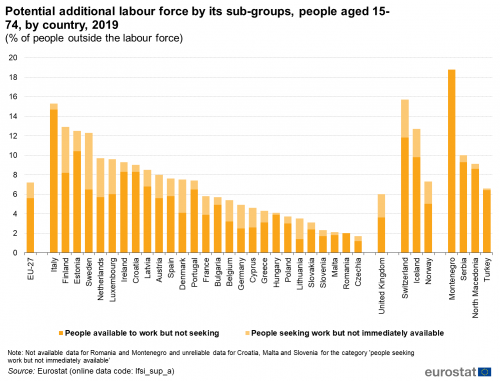 Age, gender and education of people in the supplementary categories

At European level, there are more women than men among underemployed part-time workers in all age groups. Around two thirds of those who are underemployed between 25 and 54 years old and between 55 and 74 years old are women in 2019 (precisely, 68.3 % and 65.9 %). The differences between men and women are a bit smaller for the youngest age group in which women accounted for 57.7 % of the young underemployed people.

For men and women who seek work without being able to start working immediately, differences although less obvious also appear in the EU-27 in 2019. In the youngest age group (15-24) and the oldest age group (55-74), there is almost no difference in the number of men and women. In the middle age group women outnumber men, but not by very much (57.1 % against 42.9 % for men).

Regardless of gender, among people available to work but not seeking, people have most likely attained a low education level, while for the other two indicators, i.e. people seeking but not immediately available and underemployed people, the greatest number is found for people with a medium level of education. People with tertiary education level were the smallest group in all the supplementary categories compared with people with low and medium education level.

Labour market slack in the EU-27

At European level, the development of the labour market slack seems to follow and emphasize the development of the unemployment (according to ILO) which is one of its components (see Figure 6). The unemployment fluctuations are however more pronounced than the variations of the other three components, more stable overtime but still connected to the economic situation. The labour market slack accounted for 14.0 % of the extended labour force in 2008 and for 13.2 % in 2019, with the highest value found in 2013 i.e. 19.5 %. Based on the annual data, the unemployment (ILO) in 2019 stood for 6.4 % of the extended labour force in the EU-27, about half of the value of the labour market slack. 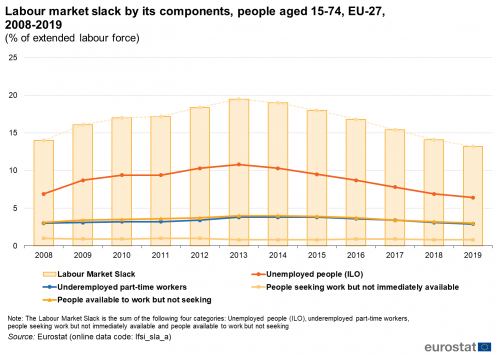 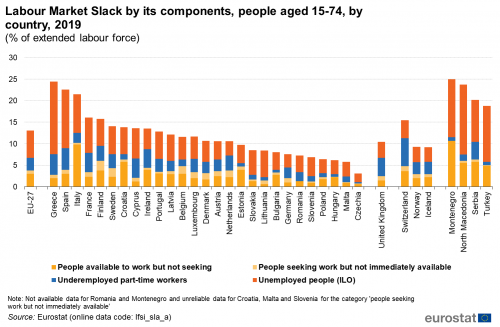 Source: The European Union labour force survey (EU-LFS) is the largest European household sample survey providing quarterly and annual results on labour participation of people aged 15 and over as well as on persons outside the labour force. It covers residents in private households. Conscripts in military or community service are not included in the results. The EU-LFS is based on the same target populations and uses the same definitions in all countries, which means that the results are comparable between countries.

Definitions: The concepts and definitions used in the labour force survey follow the guidelines of the International Labour Organisation.

Five different articles on detailed technical and methodological information are linked from the overview page of the online publication EU labour force survey.