Key figures on the changes to the labour market 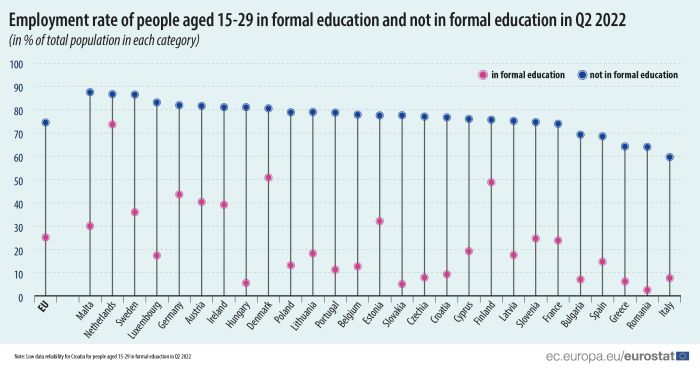 This overview of the changes to the labour market aims to answer the following questions: is the increase in the employment rate the same for younger and older workers? Is the trend different for young people still in education compared to those not in education? Which occupations recorded the highest number of recent job starters?

The analysis is carried out for the European Union (EU) as a whole, for the 27 EU Member States individually, for three EFTA countries (Iceland, Norway and Switzerland) and for one candidate country (Serbia). It makes use of non-seasonally adjusted quarterly data from the European Union Labour Force Survey (EU-LFS).

This article is part of the online publication Labour market in the light of the COVID 19 pandemic - quarterly statistics.

The population by labour status can be analysed using the European Union Labour Force Survey (EU-LFS) data. A closer look at the various categories acting on the labour market shows that age, sex as well as level of education are key factors for employment analysis but are important also for unemployed people or those outside the labour force. 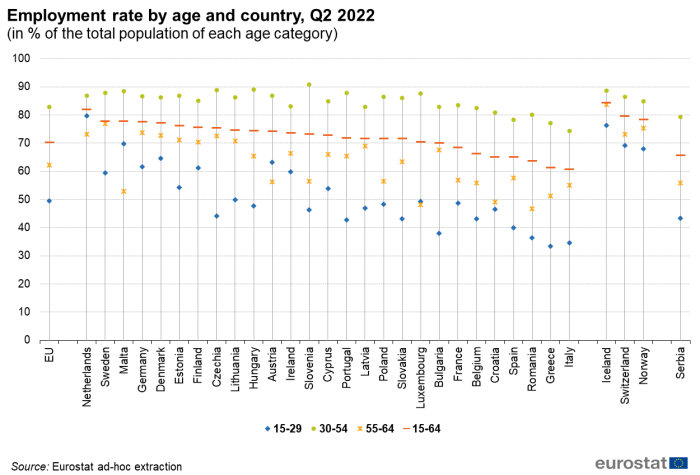 Figure 3: Employment rate by age and country, Q2 2022
(in % of the total population of each age category)
Source: Eurostat LFS ad-hoc extraction

Among those who are in formal education, the proportion of employed people varies significantly according to the educational attainment level but is very close for men and women:

Over this period, Lithuania, Spain, Ireland, Greece and Italy recorded the largest increases in the employment rate of young people aged 15-29 and not in formal education (ranging from +8.7 pp. to +6.0 pp.), while Slovenia, Romania, Finland and Czechia recorded a decrease ranging from -5.4 pp. to -0.4 pp. 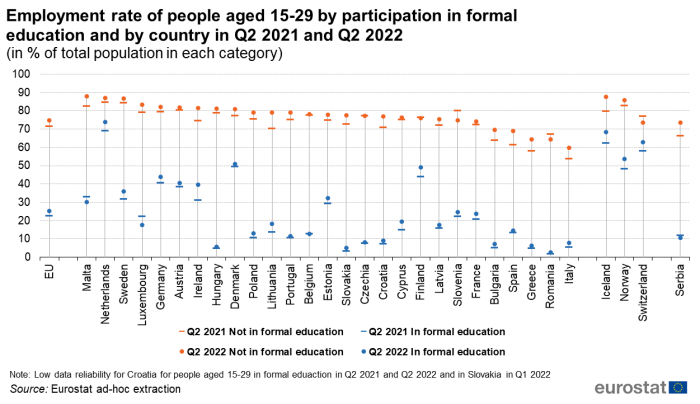 Figure 5: Employment rate of people aged 15-29 by participation in formal education and by country in Q2 2021 and Q2 2022
(in % of total population in each category)
Source: Eurostat LFS ad-hoc extraction 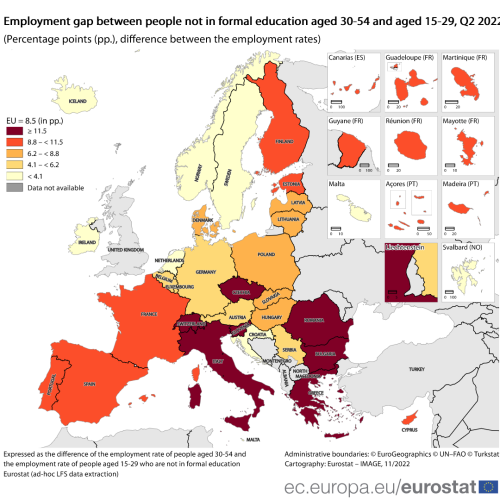 Regarding the repartition by age, young people aged 15-29 represent the greatest proportion of recent job starters in all occupational groups with managers being the only exception. The proportion of young people reaches 55.9 % of all service and sales workers aged 15-59 who have started their job in the last 3 months. 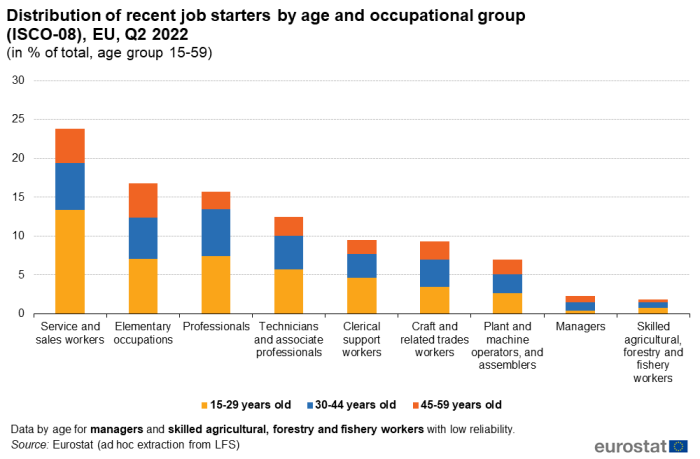 All figures in this article are based on non-seasonally adjusted quarterly results from the European Union Labour Force Survey (EU-LFS).

Source: The European Union Labour Force Survey (EU-LFS) is the largest European household sample survey providing quarterly and annual results on labour participation of people aged 15 and over as well as on persons outside the labour force. It covers residents in private households. Conscripts in military or community service are not included in the results. The EU-LFS covers the same target populations and uses the same definitions in all countries, which means that the results are comparable between the countries. The EU-LFS is an important source of information about the situation and the trends in the national and EU labour markets. Each quarter around 1.8 million interviews are conducted throughout the participating countries to obtain statistical information for some 100 variables. Due to the diversity of information and the large sample size, the EU-LFS is also an important source for other European statistics like Education statistics or Regional statistics.

Coverage: The results from the survey currently cover all European Union Member States, the EFTA Member States Iceland, Norway and Switzerland, as well as the candidate countries Montenegro, North Macedonia, Serbia and Turkey. For Cyprus, the survey covers only the areas of Cyprus controlled by the Government of the Republic of Cyprus.

In the analysis by economic activity and occupational group, only those activities and groups with more than 100 thousand employed people at EU level are taken into account.

European aggregates: EU and EU-27 refer to the totality of the EU of 27 Member States. If data are unavailable for a country, the calculation of the corresponding aggregates takes into account the data for the same country for the most recent period available. Such cases are indicated.

The concepts and definitions used in the EU-LFS follow the guidelines of International Labour Organization (ILO). In particular, employed people comprise: (a) persons who during the reference week worked for at least one hour for pay or profit or family gain; (b) persons who are not at work during the reference week but had a job or business from which they are temporarily absent.

More information on the LFS can be found via the online publication EU Labour Force Survey, which includes eight articles on the technical and methodological aspects of the survey. The EU-LFS methodology in force from the 2021 data collection onwards is described in methodology from 2021 onwards. Detailed information on coding lists, explanatory notes and classifications used over time can be found under documentation.

The COVID-19 pandemic hit Europe in January and February 2020, with the first cases confirmed in Spain, France and Italy. COVID-19 infections have been diagnosed since then in all European Union (EU) Member States. To fight the pandemic, EU Member States took a wide variety of measures. From the second week of March 2020, most countries closed retail shops, with the exception of supermarkets, pharmacies and banks. Bars, restaurants and hotels are also closed. In Italy and Spain, non-essential production is stopped and several countries imposed regional or even national lock-down measures which further stifled economic activities in many areas. In addition, schools are closed, public events are cancelled and private gatherings (with numbers of persons varying from 2 to over 50) banned in most EU Member States.

The majority of the preventive measures are initially introduced during mid-March 2020. Consequently, the first quarter of 2020 was the first quarter in which the Labour Market across the EU was affected by COVID-19 measures taken by Member States.

In the following quarters of 2020, as well as 2021, the preventive measures against the pandemic are continuously relaxed and re-enforced in accordance with the number of new cases of the disease. New waves of the pandemic began to appear regularly (e.g. peaks in October-November 2020 and March-April 2021). Furthermore, new strains of the virus with increased transmissibility emerged in late 2020, which additionally alarmed the health authorities. Nonetheless, as massive vaccination campaigns started all around the world in 2021, people began to anticipate improvement of the situation regarding the COVID-19 pandemic.

The quarterly data on employment allows regular reporting of the impact of the COVID-19 pandemic crisis on employment. In the publication Labour market in the light of the COVID-19 pandemic, a specific article depicts employment in general and specifically by gender, age and level of educational attainment while another article focuses on employed people and job starters by sector of economic activity and occupation.

However, in this exceptional context of the COVID-19 pandemic, employment and unemployment as defined by the International Labour Organisation (ILO) are not sufficient to describe the developments taking place in the labour market. In the first phase of the crisis, active measures to contain employment losses led to absences from work rather than dismissals, and individuals could not look for work or are not available due to the containment measures, thus not counting as unemployed. Only referring to unemployment might consequently underestimate the entire unmet demand for employment, also called the labour Market slack.