Figure 1 shows that extra-EU exports and imports in medicinal and pharmaceutical (shortened to medicinal in the rest of the article) products grew almost every year between 2002 and 2019, reaching EUR 203 billion and EUR 93 billion respectively in 2019. Even the financial crisis, which affected trade in many other products, did not cause a fall in exports or imports. With exports growing more than imports, the trade surplus grew from EUR 18 billion in 2002 to a record high of EUR 109 billion in 2019. 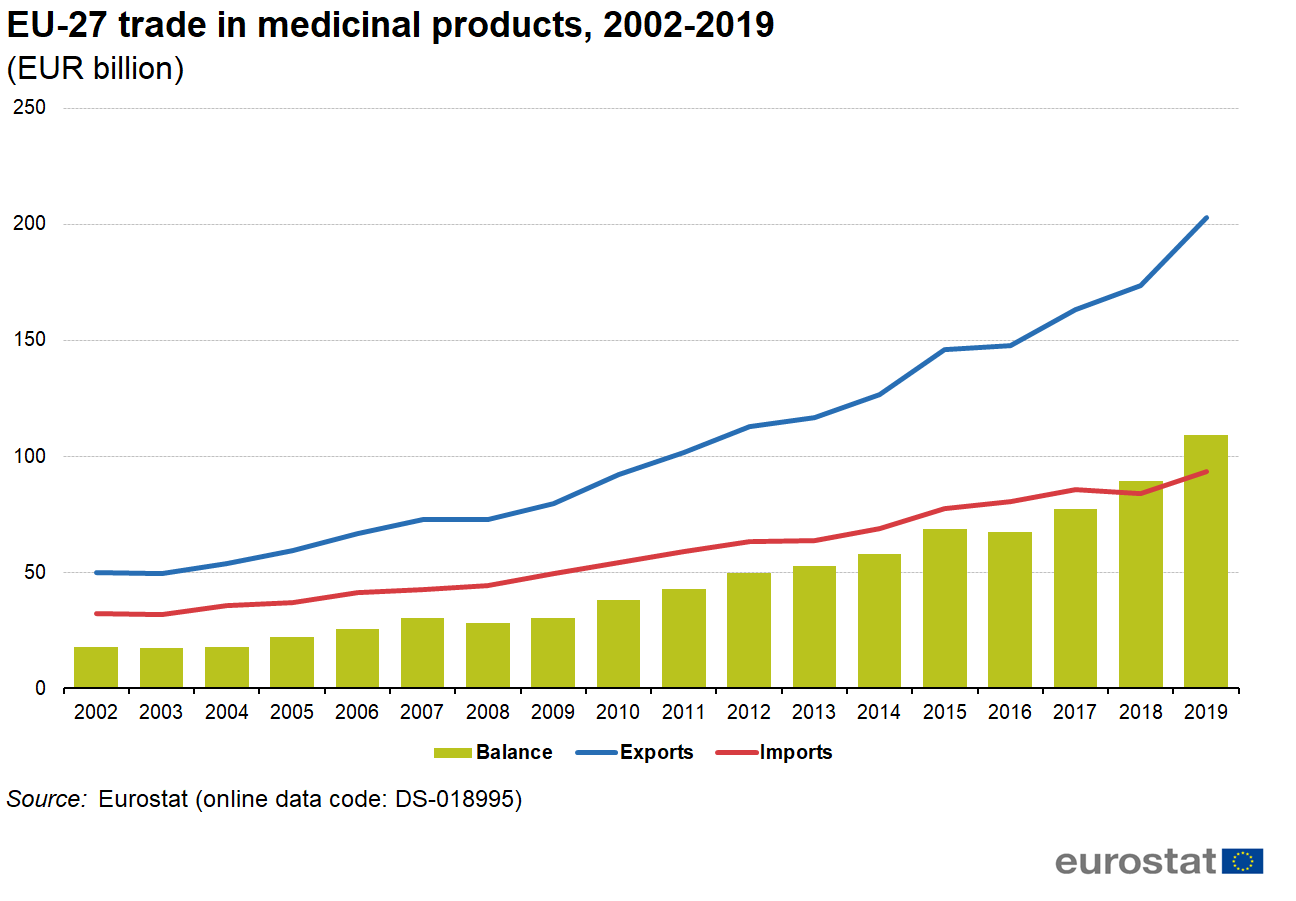 Between 2002 and 2008 the share of medicinal and pharmaceutical products in total extra-EU trade remained fairly stable (Figure 2). In 2009, the share of imports increased by 1.3 percentage points (pp) and exports by 1.6 pp. This was not caused by an increase in trade in medicinal products but rather by the decline in total trade. Since 2009, the shares have been fluctuating but there is a clear overall growth. Since 2002, the share for imports has grown by 1.4 pp, while the share for exports has grown by 4.5 pp. 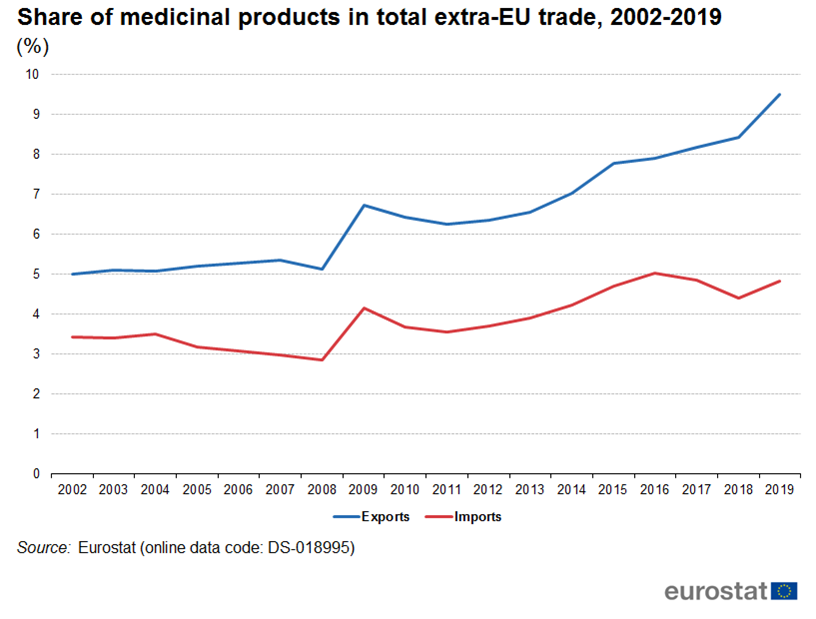 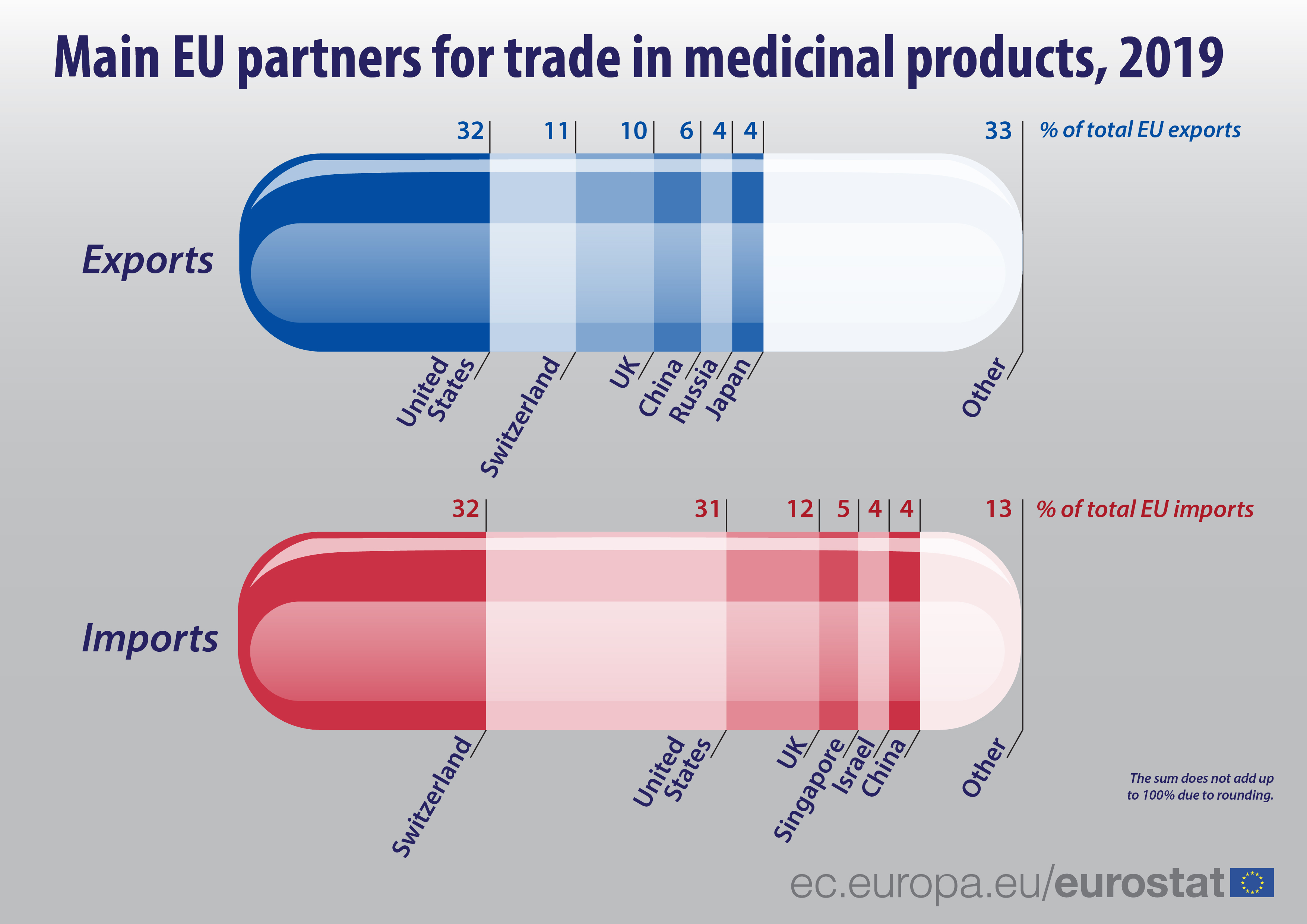 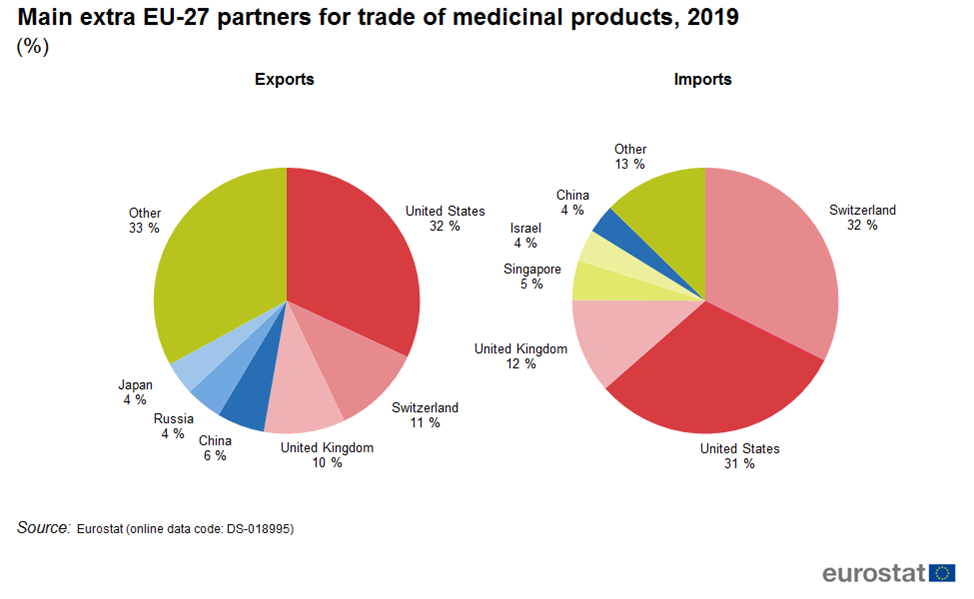 Figure 4 shows the development of trade in medicinal products between the EU and the United States from 2002 to 2019. In this period, exports grew by EUR 49 billion, falling only in 2008 and 2013. In the last two years, there was an exceptionally high increase of EUR 23 billion, accounting for almost half of the growth in the whole period. Between 2002 and 2019 Imports grew by EUR 18 billion. Measured as average annual growth over the period 2002 to 2019, exports grew by 8.8 % per year and imports grew by 5.9 % per year. During the whole period the EU has had a trade surplus with the United States, peaking at EUR 36 billion in 2019. 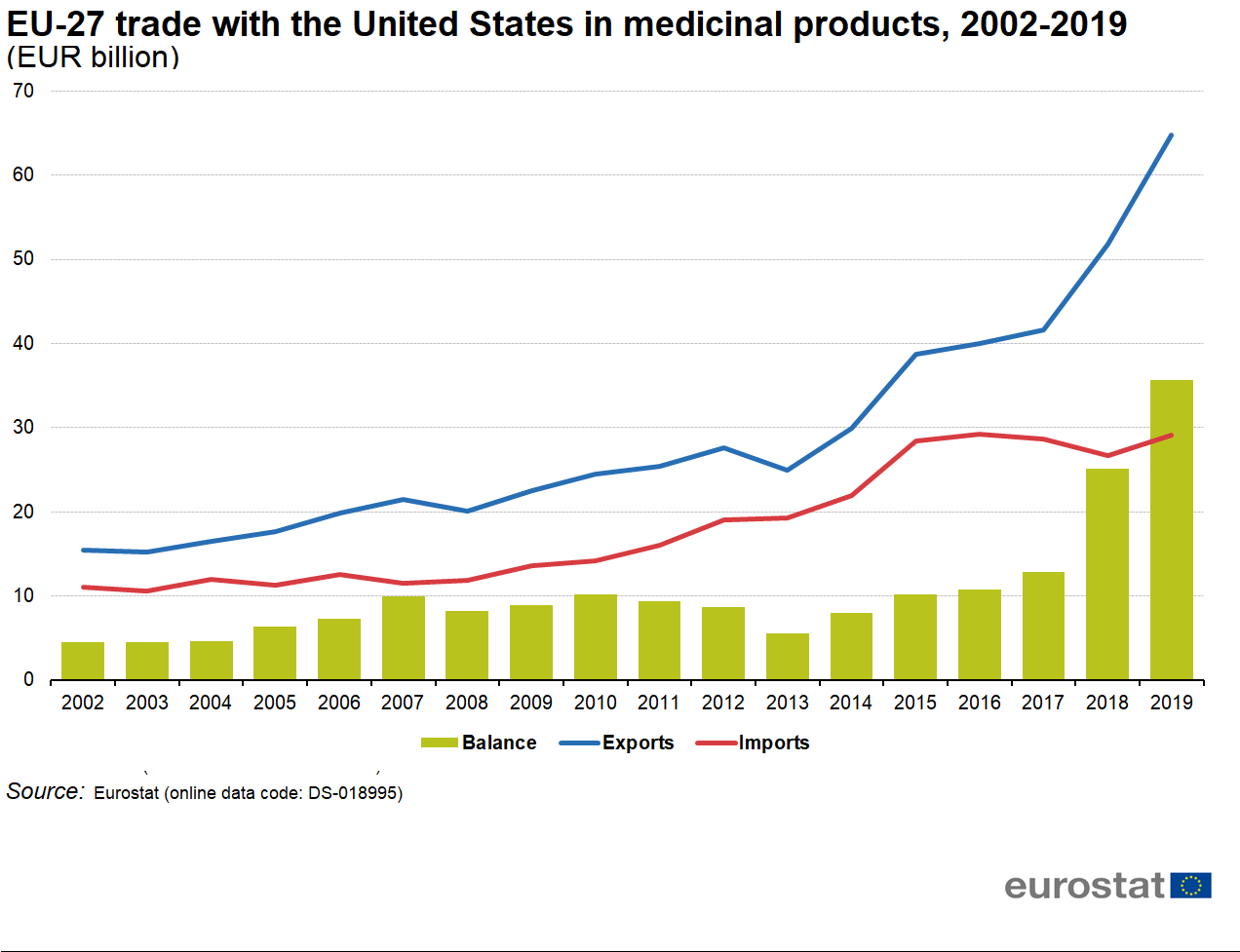 Figure 5 shows the development of trade in medicinal products between the EU and Switzerland from 2002 to 2019. In this period, exports grew by EUR 16 billion, which was EUR 33 billion less than the export growth for the United States. Imports in this period grew by EUR 21 billion, which was EUR 2 billion more than the increase of imports from the United States. Measured as average annual growth, exports grew by 8.3 % per year, while imports grew by 7.6 % per year. During the whole period, the EU had a trade deficit with Switzerland, peaking at EUR 8 billion in 2009, 2012 and 2019. 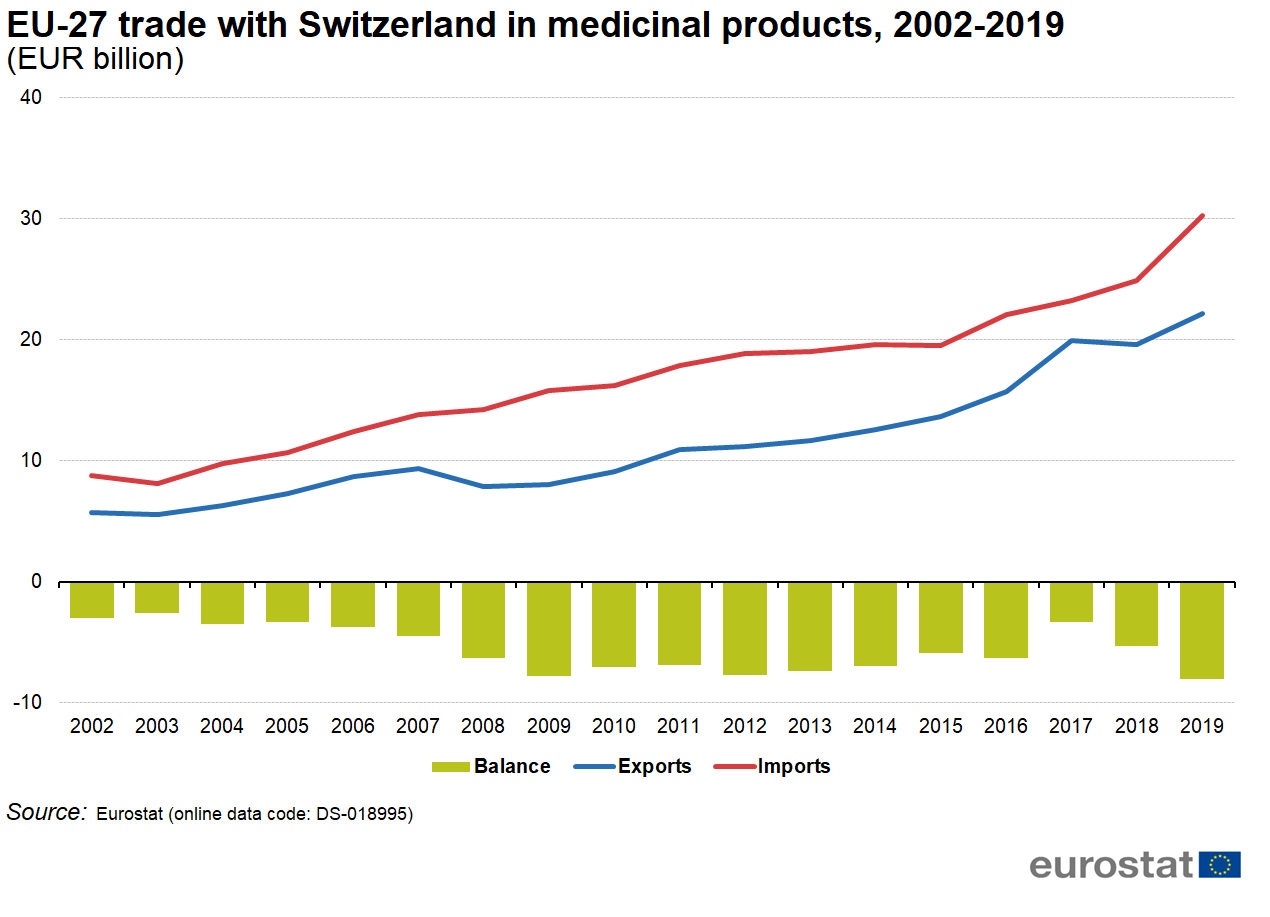 The share of intra EU-27 exports in total (intra + extra) exports of medicinal products varies greatly between Member States. For Luxembourg, Slovakia and Malta is was above 85 %, while for Slovenia, Ireland, Sweden and Denmark it was below 40 %. The average for the EU-27 was 45 %. 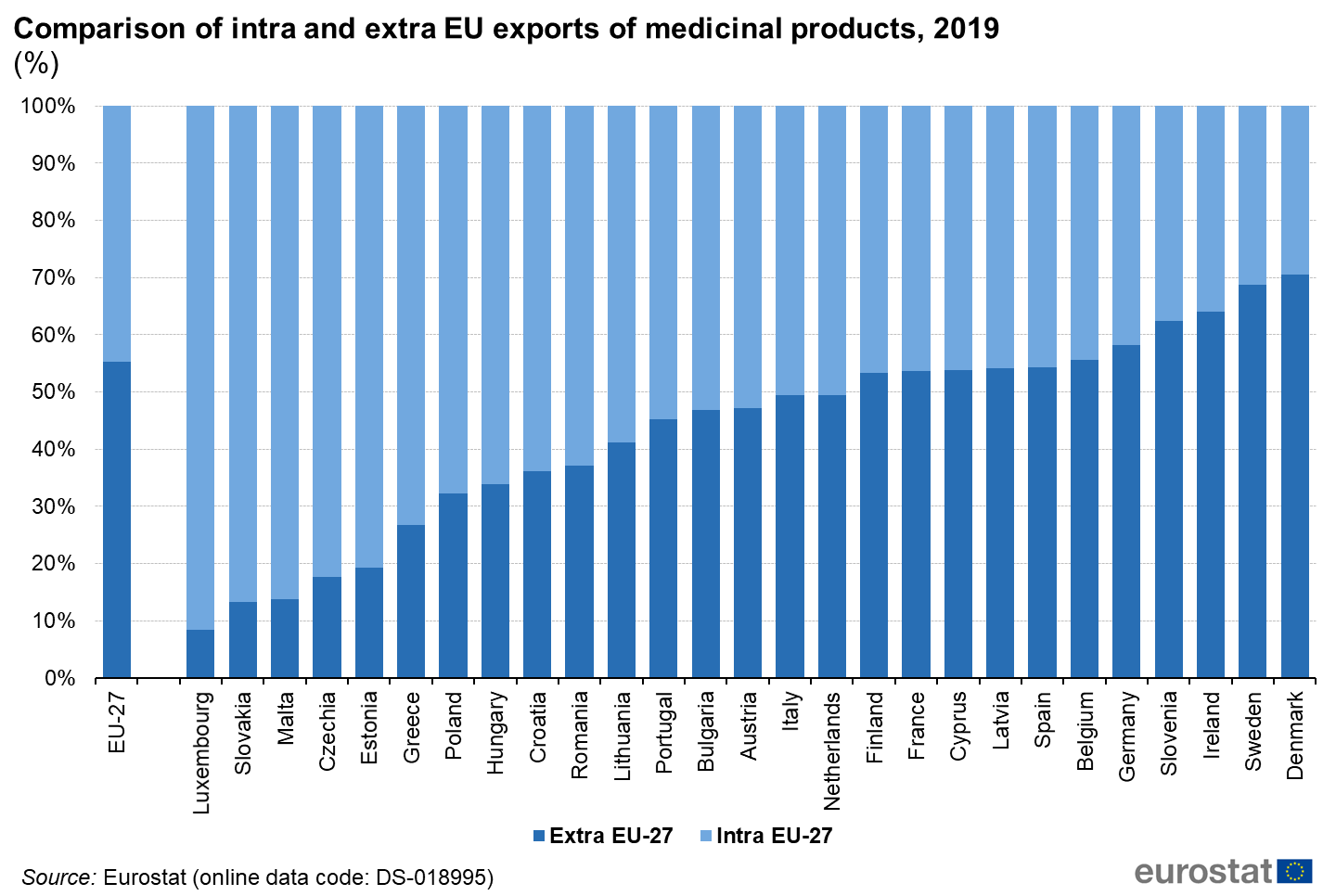 The share of intra EU-27 imports in total (intra + extra) exports of medicinal products between Member States varies even more than for exports. For Luxembourg, Lithuania, Estonia and Slovakia it was above 90 %, while for the Netherlands, Slovenia and Malta it was below 40 %. The average for the EU-27 was 64 %. 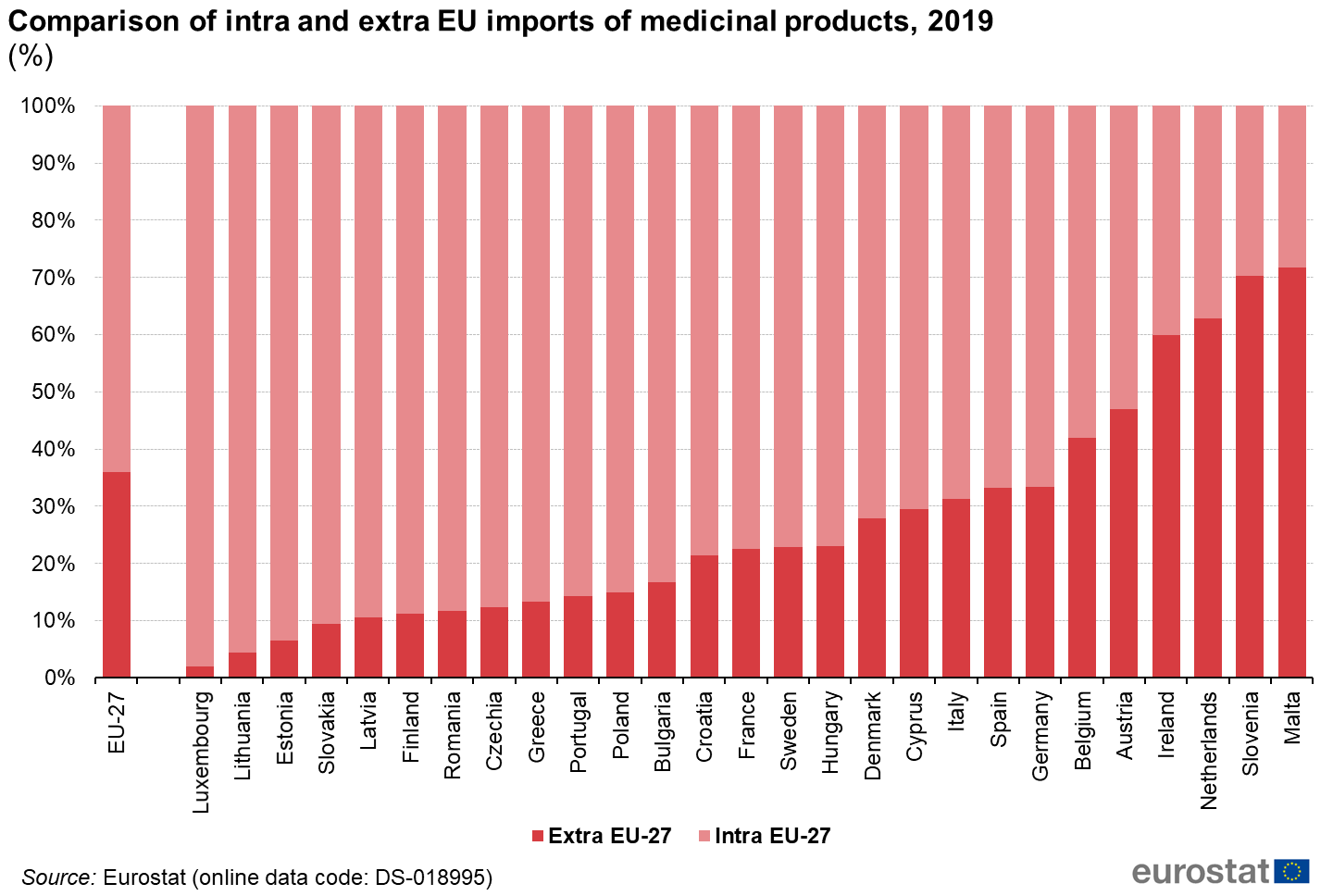 Table 1 shows that, amongst the EU Member States, Germany had the highest exports (EUR 47 billion) followed at some distance by Ireland (EUR 32 billion), Belgium (EUR 28 billion), the Netherlands (EUR 22 billion), France (EUR 17 billion), and Italy (EUR 16 billion). Three countries had shares higher than 20 % for medicinal products in their total extra-EU exports. These were Ireland (33 %), Slovenia (28 %) and Denmark (25 %).

Germany (EUR 30 billion and Ireland (EUR 27 billion) had the largest trade surpluses for medicinal products in 2019. 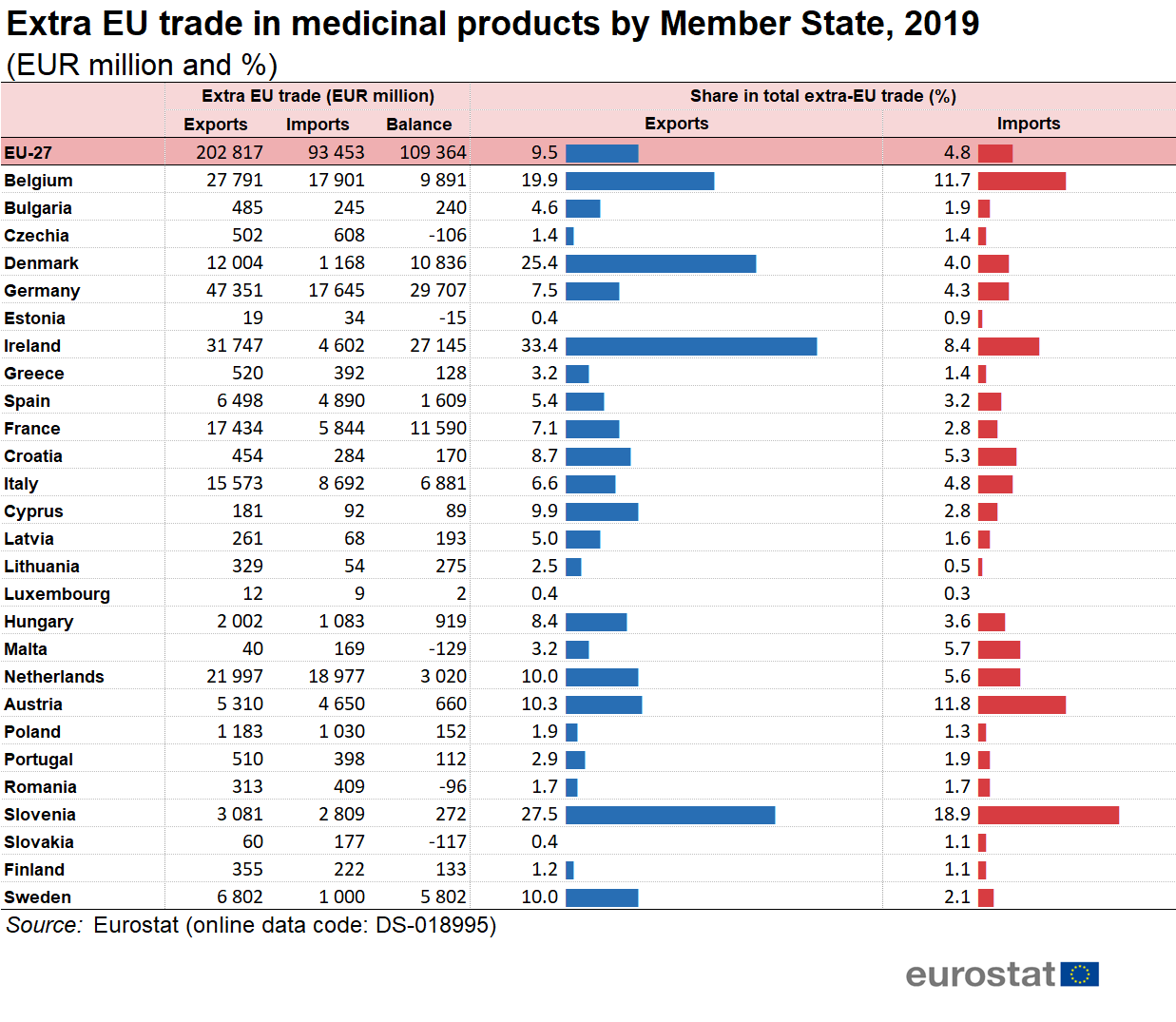 This article is based on data available in the Eurostat COMEXT database for EU Member States and in the United Nations COMTRADE database for non-EU countries.

A code (such as ‘DS_018995’) is inserted as part of the source. This code allows the reader to easily access the most recent EU data on the Eurostat website. Note that data on the website is frequently updated and may also be more detailed or have a different measurement unit. It should also be noted that European statistics on international trade in goods are compiled according to the EU concepts and definitions and may, therefore, differ from national data published by Member States.

Division 54 'Medicinal and pharmaceutical products' of the Standard international trade classification revision 4 (SITC Rev. 4), is made up of the sub-groups:

Trade values are expressed in millions (106) of euros. They correspond to the statistical value, i.e. to the amount which would be invoiced in case of sale or purchase at the national border of the reporting country. It is called a FOB value (free on board) for exports and a CIF value (cost, insurance, freight) for imports.

A bias in the geographical allocation of extra-EU flows

Pharmaceutical products are among the most important products within the chemicals sector (SITC section 5). Today, the pharmaceutical sector is extensively regulated at EU level in the dual interest of ensuring the highest possible level of public health and patient confidence in safe, effective and high-quality medicinal products, while continuing to develop a single EU market for pharmaceuticals in order to strengthen the European pharmaceutical industry's competitiveness and research capability.

The most common trade impediments faced by pharmaceutical exporters are a range of burdensome and costly registration, licensing and certification procedures. The EU aims to redress these through its bilateral trade agreements or by tackling individual barriers as part of its market access partnership.