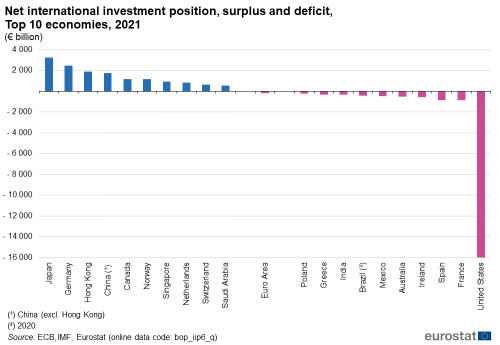 The international investment position (IIP) is an economy’s financial statement that shows at a point in time the value of financial assets of residents of an economy that are claims on non-residents or are gold bullion held as reserve assets; and the liabilities of residents of an economy to non-residents. The difference between the assets and liabilities is the net position in the IIP and represents either a net claim (positive) on or a net liability (negative) to the rest of the world. Additionally, the net IIP at the end of a specific period reflects not only financial flows but also other changes (changes in volume, exchange rate changes, and other price changes) during the period, all of which affect the current value of a country’s total claims on non-residents and total liabilities to non-residents. This article presents data on the (net) IIP of the European Union (EU) and its Member States. Data are compiled according to the Sixth Edition of the IMF's Balance of Payments and International Investment Position Manual (BPM6); the major components of the IIP for the EU were estimated by Eurostat.

EU is a net borrower of financial funds

Eurostat estimations based on official data show that in 2021 the EU was a net debtor towards the rest of the world, resulting from higher positions in liabilities than in assets (excluding reserve assets, see Table 1). This has the consequence that the EU was a net borrower of financial funds[1].

The United States showed the highest international indebtedness in 2021 with a net IIP of –€15 982 bn and can be therefore considered as the top global net debtor economy in the world (see Figure 1). Japan on the contrary was the global top net lender economy to the world with a net IIP of €3 214 bn. With France, Spain, Ireland, Greece and Poland, five EU Member States were among the top 10 net borrowers, while other European countries like Germany, Norway, the Netherlands and Switzerland were among the top ten net lenders to the world. This comparison clearly displays a very heterogeneous situation at national level concerning net international surplus or debt within Europe and the EU[2].

EU is a net lender in direct investment 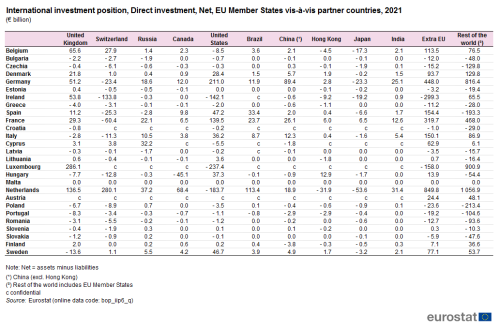 Residents of the EU recorded outstanding assets regarding portfolio investment in 2021 to the extent of €12 651.6 bn and outstanding liabilities with a volume of €14 630.8 bn. According to the resulting net deficit of –€1 979.2 bn, the EU has to be considered as a significant international net borrower of portfolio investment. As shown in Table 3, considerably high values for assets and liabilities in portfolio investment towards the rest of the world were recorded by Luxembourg (€5 684.8 bn and €6 751.1 bn) and Ireland (€4 457 bn and €5 300.8 bn), because capital is raised predominantly through the issuance of investment fund shares in these two countries. Among all EU Member States, Germany was in 2021 the largest net investor in foreign portfolio investment assets, recording a net surplus of €628.1 bn vis-à-vis the rest of the world, while the highest net deficits were reported by Luxembourg (–€1 066.3 bn) and France (–€1 038.3 bn). 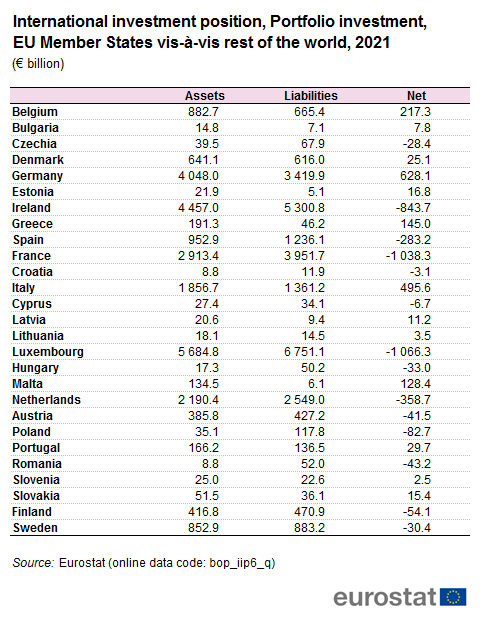 EU becomes a net borrower of other investment in 2021

The IIP component other investment[3] showed for the EU a negative net position of –€286.2 bn in 2021. In contrast to a slight surplus for reference year 2020 (€31.5 bn) the EU was in 2021 a net borrower to the rest of the world in financial funds related to other investment. 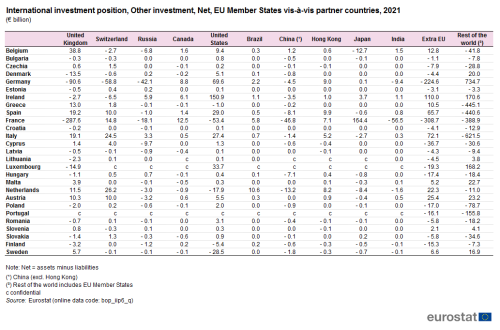 Germany and the Netherlands are the biggest EU creditor nations

IIP data for each Member State can be analysed by examining their (net) exposure in financial assets and liabilities with the rest of the world (including intra-EU exposure). Economies with a positive net IIP are characterised by higher positions in financial assets abroad than financial liabilities and are consequently considered as net lenders or creditors. Germany and the Netherlands had vis-à-vis the rest of the world the highest net IIP values in the EU in 2021.

Figure 2 shows that Germany displayed a positive net IIP of €2 440.7 bn (€2 134.1 bn in 2020) and that the corresponding value for the Netherlands was €807.0 bn (€911.1 bn in 2020). The highest outstanding positions in assets and liabilities abroad (combined) were reported by Luxembourg, Germany, the Netherlands and France, due to their status as financial centres. Furthermore, Norway and Switzerland reported high net lending positions with €1 173.2 bn and €645.3 bn respectively in 2021. 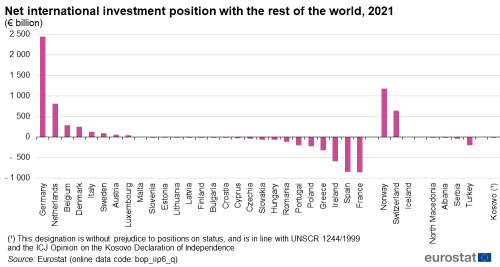 France, Spain and Ireland show currently the highest international indebtedness in the EU

Within the framework of a reinforced European economic governance after the financial and economic crisis, the European Commission has developed a set of scoreboard indicators to identify harmful macroeconomic imbalances. The net IIP as a percentage of GDP is one of the indicators included in the Macroeconomic imbalances procedure (MIP) for early warnings and national values are carefully monitored on an annual basis. The indicative threshold applied for benchmarking negative net IIPs is 35 % of GDP. Additionally, an indicator on net IIP excluding non–defaultable instruments as a share of GDP (calculated as net IIP excluding net direct investment and portfolio investment equity) has been introduced as one of auxiliary indicators. 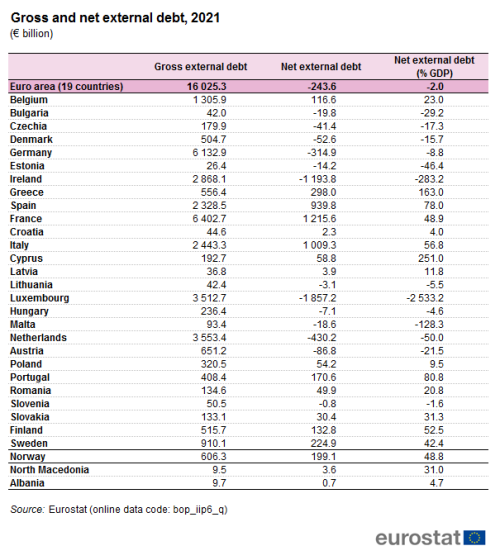 Since net external debt is calculated in a different way than net IIP, values for both measures may differ considerably. As can be seen from Table 5, countries exhibiting the highest net external debt as percentage of GDP are Spain (78.0 %), Portugal (80.8 %), Greece (163.0 %) and Cyprus (251.0 %). On the other side, Luxembourg and Ireland recorded by far the largest negative net external debt (assets higher than liabilities), both in absolute terms and as a share of GDP, reflecting their specific position as financial centres.

Statistics about the IIP are based on positions (or stocks) data which relate to the framework of balance of payments statistics. The main methodological reference is the Sixth Edition of the Balance of Payments and International Investment Position Manual (BPM6) of the International Monetary Fund (IMF). An updated version of BPM6 as well as the 2008 System of National Accounts (2008 SNA) is planned for mid-2025 partly in response to significant economic developments, including an increased role for globalisation, rising innovation, digitalization and interconnectedness of financial and trade markets. The transmission of IIP data to Eurostat is covered by Regulation (EC) No 184/2005 of the European Parliament and of the Council of 12 January 2005 on Community statistics concerning balance of payments, international trade in services and foreign direct investment. Data requirements according to the BPM6 manual are included in Commission Regulation (EU) No 555/2012 of 22 June 2012 and Commission Regulation (EU) No 1013/2016 of 8 June 2016 as an amendment to the above.

Estimate of IIP of the EU

The international investment position is an indicator of an economy’s external exposure in financial assets and liabilities to the rest of the world. It contributes to monetary policy analysis and foreign exchange rate policies. Given that the EU is not a homogeneous currency union (unlike the euro area), the EU IIP has been treated only with minor attention in the past. There has been, however, increasing demand for an IIP of the European Union for the purpose of financial stability analysis of the whole European Union. In contrast, the euro area IIP is very relevant for analysis benefitting the monetary policy of the European Central Bank.

The compilation of the IIP for the EU requires a geographical breakdown of position data. All Member States would have to generally disseminate their assets and liabilities[4] held outside the European Union (extra EU). This would require all Member States to send also their positions in reserve assets (as a component of the IIP) vis-à-vis extra-EU to Eurostat. Data requirements applying to Member States not participating in the Monetary Union are for international investment position generally less comprehensive compared with euro area Member States and geographical breakdown. The legal requirement for the dissemination of portfolio investment liabilities remains practically without geographical breakdown (Geo 1, rest of the world)[5], and requires resorting to other data sources[6]while the dissemination of reserve assets is not covered by the above mentioned regulation.

Starting from April 2020, due to better data coverage, Eurostat is able to calculate quarterly international investment position of the EU and disseminate these series in the public database. Missing national data for portfolio investment liabilities vis-à-vis extra-EU have been calculated as portfolio investment assets vis-à-vis extra EU minus net portfolio investment vis-à-vis rest of the world (i.e. assuming that net intra-EU positions are equal zero). Eurostat chose, however, not to estimate a geographical breakdown of reserve assets, as such item for an economic union that is not a currency union is not really economically meaningful, and decided to disseminate only international investment position excluding reserve assets. Therefore, it should be noted that figures for the EU (IIP excluding reserve assets) are not fully comparable with data for euro area (total IIP).

Eurostat publishes net external debt as positions in debt liabilities minus the respective positions in debt assets[7]. The latter is based on the assumption that for risk-management purposes entities manage their external liabilities and assets in an integrated manner. Consequently, the difference between an economy’s net external debt and net international investment position is the absence of all equity and investment fund shares components, as well as financial derivatives [8] and gold bullion (EDS, paragraph 7.51), as well as the sign convention[9].

Eurostat publishes both gross and net external debt, based on quarterly IIP data for all EU Member States and several European countries, while the World Bank publishes annual data on external debt positions for most countries in the world[10].

The EU is a major player in the global economy not only for international trade in goods and services, but also for financial market operations and direct investment. Statistics on the international investment position provides a complete picture of the EU and its Member States’ external exposure in financial assets and liabilities to the rest of the world. These statistics effectively support financial stability analysis and may be used as a tool to study the international exposure of different parts of the EU’s economy, indicating its comparative advantages and disadvantages with the rest of the world, and calibrate the implied macroeconomic risks for the respective economies. The financial and economic crisis underlined the importance of developing such economic statistics insofar as improvements in the availability of data on the real and financial economies of the world may have helped policymakers and analysts when the crisis unfolded; for example, if internationally comparable information about financial exposure in specific assets and liabilities had been available earlier.