The industrial import price index (abbreviated as IMPR or sometimes MPI) is a business cycle indicator which measures monthly changes of prices of products which are imported by domestic businesses from other countries.

The indices for import prices are calculated with a distinction between imports coming from within or outside the euro area.

Between January 2005 and July 2008 (peak before the financial crisis) import prices for total industry increased by more than 18 percentage points. In the following nine months until April 2009 import prices dropped steadily to the level of around four years earlier. In the following two years until Mid-2012 the price level increased again. Afterwards a distinct downwards trend (with temporary sharp decreases during the winters 2014-15 and 2015-16 which were due to energy prices) set in which lasted until February 2016. Since 2016 import prices increased and almost regained the pre-crisis level (Figure 1). In March and April 2020 a rapid decline of prices set in, especially for imports from non-euro countries, as a result of the Covid-19 crisis. During the summer and autumn of 2020 prices partly recovered but remained at a historic low. In 2021 import prices began to increase quite dynamically. Between January 2021 and September 2021 the total import price index increased by more than 13 % and is now close to the peak levels of 2012 and 2013.

For the different main industrial groupings price developments were relatively heterogeneous. During the peak of the Covid-19 crisis, i.e. between February and April 2020 all import prices slightly dropped. The magnitude of the reductions was however quite moderate (e.g. around 2 percentage points for intermediate goods and less than half a point for capital goods and consumer goods). The import prices for energy products however were almost halved, leading to a total reduction of the index of import prices of around 6 points.

In general, intermediate goods show a similar pattern as total industry, i.e. an increase between 2005 and the second half of 2008, a prolonged fall until around mid-2009, followed by an increase which resulted in index levels some points higher than before the financial crisis. 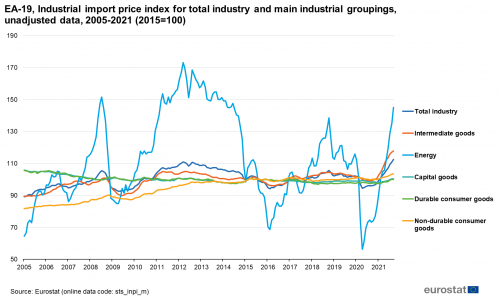 Prices for capital goods and durable-consumer goods show an almost identical and rather stable pattern. Since 2005 they decreased by around 7 percentage points but apparently were hardly affected by the financial crisis. Prices for non-durable consumer good imports on the other hand have displayed a rather steady increase during this period and are now around 18 percentage points higher than in 2005.

Import prices for energy products (which constitute almost 12 % of the total euro area index) are much more volatile than the prices for the other product groups. Apart from a temporary drop in the second half of 2006 they increased between January 2005 and July 2008. Then they fell by almost 60 percentage points during the crisis. Afterwards the price level rose to a peak level of 173 index points in March 2012. Between March 2012 and February 2016 the import price level for energy fell again to a long time low of around 70 percentage points. Since the beginning of 2016 prices were increasing again but then plummeted as a result of the Covid-19 crisis.

In the beginning of 2021 import prices for all MIGs started to increase. Since December 2020 prices for energy (which had fallen massive during the Covid-19 crisis in 2020) increased by 74 %, import prices for intermediate goods rose by almost 17.0 %.

In all countries for which data are available since 2006, total import prices show similar up-and-down-patterns. Positive rates of around 4 % or more in 2006 followed by lower but still positive rates in 2007 and again relatively high rates in 2008. For 2009 all countries recorded negative rates of change (corresponding with the steep fall of the index in the second half of 2008 and early 2009) and again relatively high positive rates in 2010 and 2011. In 2012 the growth rates were clearly lower again. In 2013, 2014, 2015, and 2016 import prices in all Member States of the euro area registered a negative annual growth rate but regained positive levels in 2017 and in 2018. In 2019 prices dropped in quite a number of countries. In 2020 prices dropped in all countries for which data are available. (Table 1). 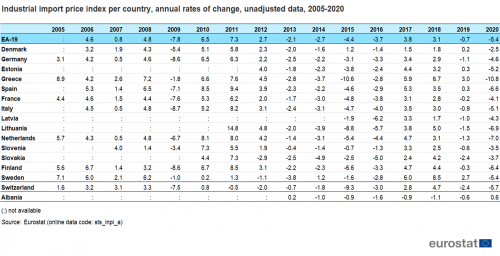 Table 2 provides an overview of the annual changes for the main industrial groupings but also for the various manufacturing activities. Strong ups and downs in the annual prices can be observed in particular for mining and the extraction of petroleum and gas, for coke and refined petroleum but also for basic metals. 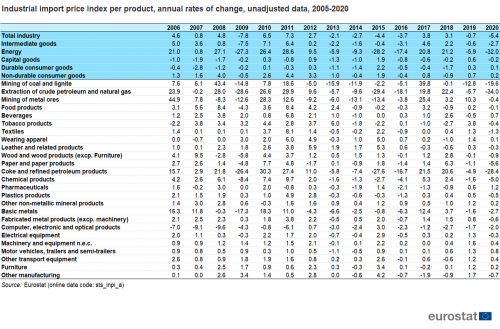 The obligation to transmit import price data to Eurostat was introduced in 2005 by Regulation (EC) No 1158/2005of 6 July 2005. The need for this indicator arose in particular in the context of the European Monetary Union. Industrial import price indices became available in 2007. Most series start with the year 2006. The current legal base are the European business statistics regulation 2019/2152 and the Commission implementing regulation 2020/1197.

The import price indices cover most mining activities and a large number of manufactured products at the 2-digit level of the NACE Rev. 2. The index is calculated on the basis of the Statistical classification of products by activity (CPA). Some product groups are however excluded (such as nuclear products, weapons, ships and aircrafts, printing and some repair services, see Table 2).

Import prices in short-term statistics are defined as follows, they:

Currently the indices for industrial import prices are calculated with 2015 as the base year (=100).

The industrial import prices index shows the development of prices of goods imported by enterprises which are used as intermediate products in their production process, as capital goods or as goods to be resold to consumers. The development of the index is used to forecast the development of other prices notably for domestic goods. The index is an important tool for the European Central Bank and the national central banks for monitoring and analysing inflationary developments. Industrial import prices are part of the so-called 'Principal European Economic Indicators (PEEI)' which are used to monitor and steer economic and monetary policies in the EU and in the euro area.

The industrial import price index is not the only statistical indicator which provides information on the price developments of imported goods. Unit value indices (UVIs) are calculated directly from international trade data. In principle, they are simply the total value of imports of a product, divided by the total amount imported (for most products this is measured in weight). UVIs have a long history, and long-time series are available. One of the key features of UVIs is the level of detail. Elementary UVIs can be calculated for around 10 000 products, based on the most detailed level of the combined nomenclature used for classifying international trade. UVIs record price changes which are not purely a result of an evolution of prices but which are also due to quality changes and change in the mix of products. Industrial import prices, while not as detailed as UVIs, are adjusted for quality changes and allow a more precise identification of inflationary pressures stemming from import prices.