In 2017, social transfers lifted 8.7 % of the EU’s population above the poverty threshold.

This article analyses recent statistics on monetary poverty and income inequalities in the European Union (EU). Comparisons of standards of living between countries are frequently based on gross domestic product (GDP) per capita, which presents in monetary terms how rich one country is compared with another. However, this headline indicator says very little about the distribution of income within a country and also fails to provide information in relation to non-monetary factors that may play a significant role in determining the quality of life that is enjoyed by the population. On the one hand, inequalities in income distribution may create incentives for people to improve their situation through work, innovation or acquiring new skills. On the other hand, such income inequalities are often viewed as being linked to crime, poverty and social exclusion. 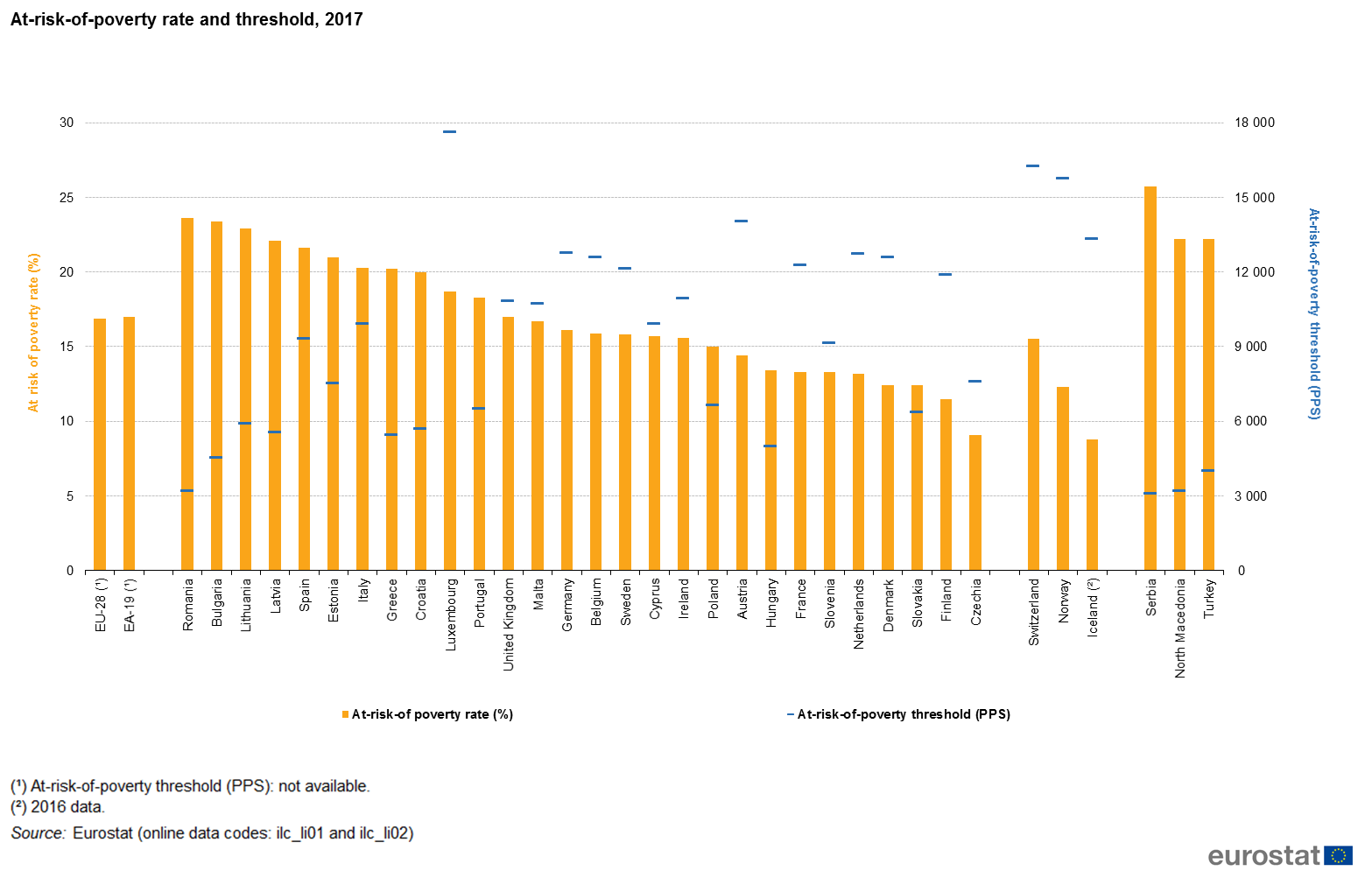 The at-risk-of-poverty threshold (also shown in Figure 1 ) is set at 60 % of national median equivalised disposable income. For spatial comparisons, it is often expressed in purchasing power standards (PPS), in order to take account of the differences in the cost of living across countries. The income values for this threshold varied considerably among the EU Member States in 2017, ranging from PPS 3 182 in Romania to PPS 14 006 in Austria, with the threshold value in Luxembourg (PPS 17 604) clearly outstripping the top of this range. The poverty threshold was also relatively low in Serbia (PPS 3 087), North Macedonia (PPS 3 179), and Turkey (PPS 3 987) and relatively high in Iceland (PPS 13 316 – 2016 data), Norway (PPS 15 740) and Switzerland (PPS 16 225). 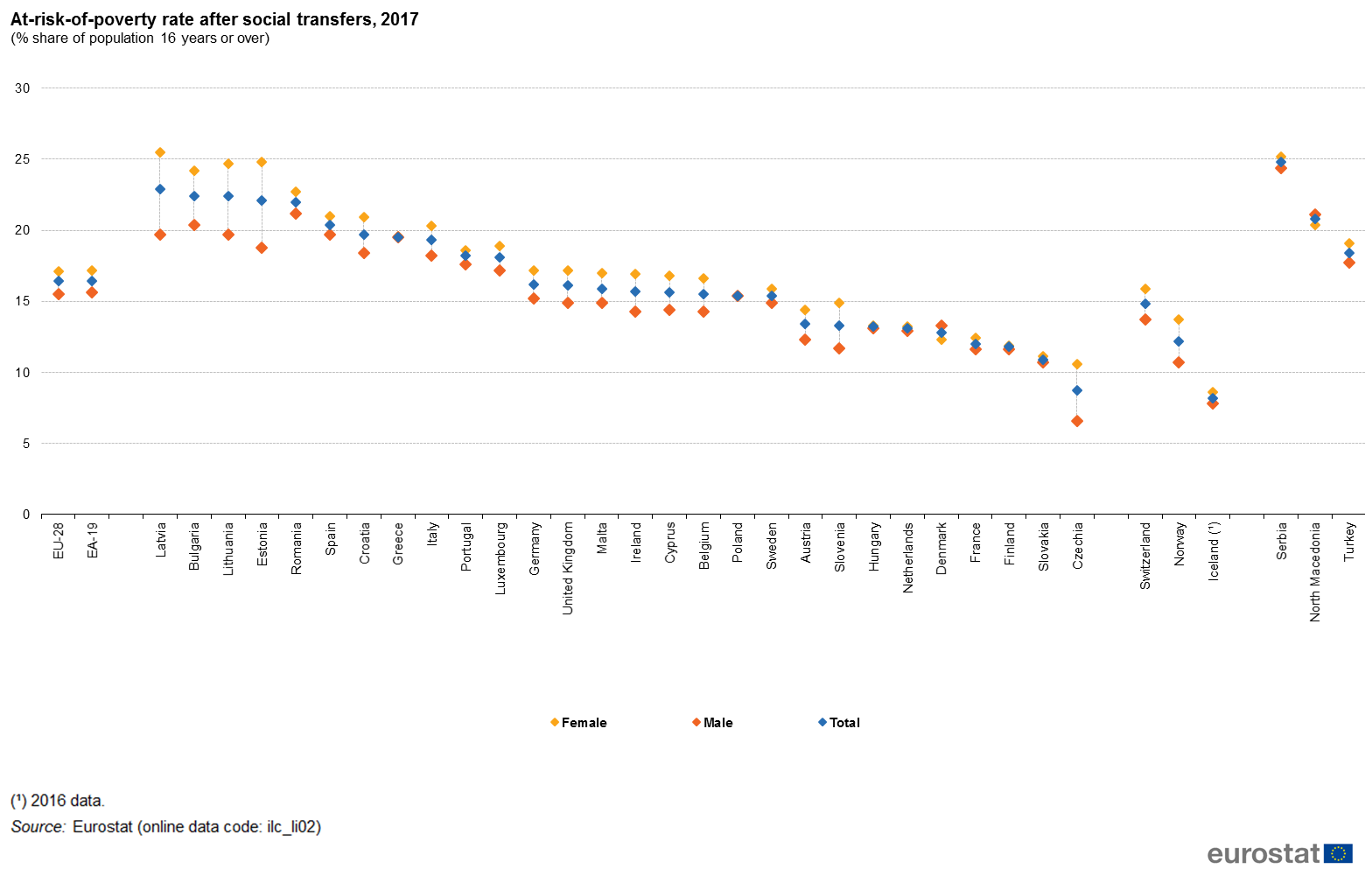 Different groups in society are more or less vulnerable to monetary poverty
In 2017, there was a small difference in the EU-28 at-risk-of-poverty rate (after social transfers) between the two sexes, with the latest rates equivalent to 15.5 % for males, compared with a higher figure of 17.1 % for females (see Figure 2). The largest gender differences in 2017 were observed in Estonia (6.0 pp), Latvia (5.8 pp), Lithuania (5.0 pp), Czechia (4.0 pp), Bulgaria (3.8 pp) and Slovenia (3.2 pp). Ireland, Croatia, Cyprus, Belgium, the United Kingdom, Italy, Malta, Austria and Germany also reported at-risk-of-poverty rates for females that were 2.0 or more pp higher than for males, as was the case in Switzerland and Norway. By contrast, in Denmark, the at-risk-of-poverty rate was 1 pp higher for men than for women. This was also the case in North Macedonia (1 pp). 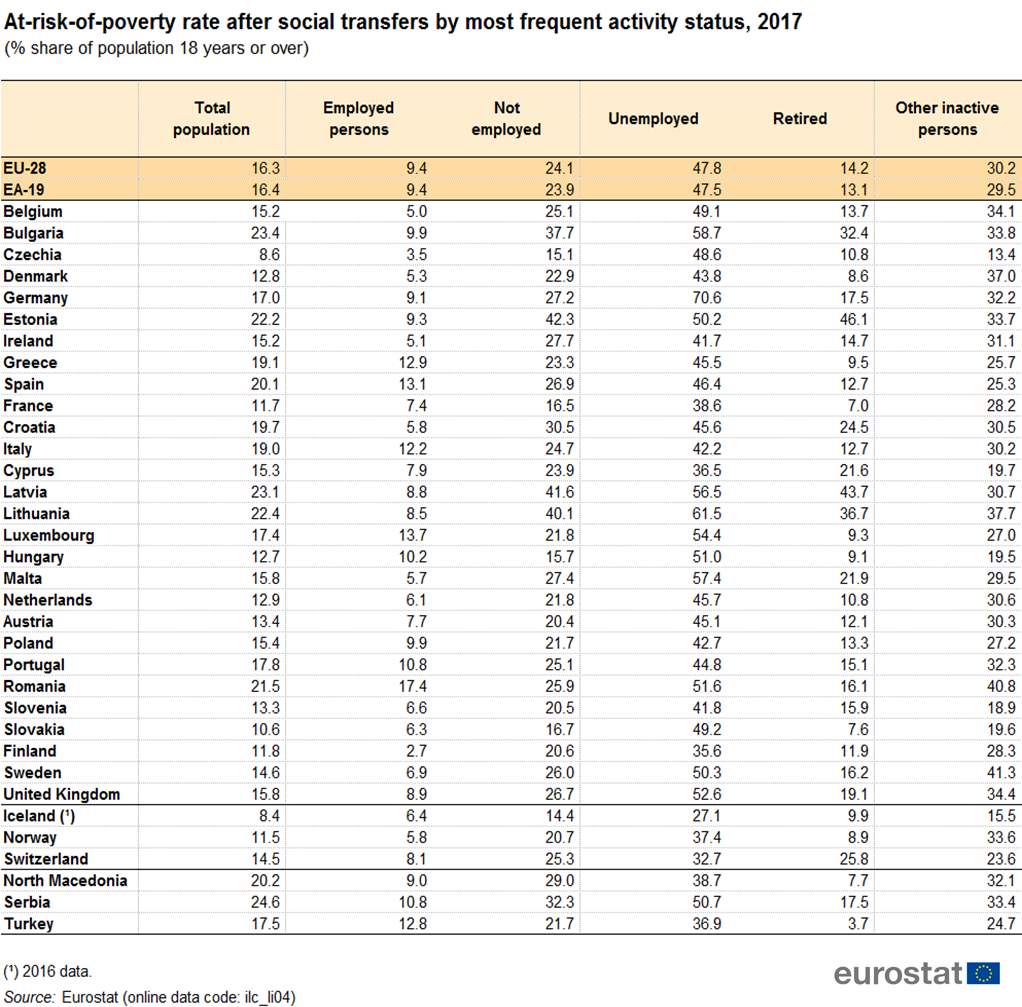 Table 1: At-risk-of-poverty rate after social transfers by most frequent activity status, 2017
(% share of population 18 years or over)
Source: Eurostat (ilc_li04)

The differences in at-risk-of-poverty rates were wider when the population was classified according to activity status
The unemployed are a particularly vulnerable group (see Table 1): almost half (47.8 %) of all unemployed persons in the EU-28 were at risk of poverty in 2017, with by far the highest rate in Germany (70.6 %). Ten other EU Member States (Lithuania, Bulgaria, Malta, Latvia, Luxembourg, the United Kingdom, Romania, Hungary, Sweden and Estonia) reported that at least half of the unemployed were at risk of poverty in 2017.

Those in employment were far less likely to be at risk of poverty (an average of 9.4 % across the whole of the EU-28 in 2017). There was a relatively high proportion of employed persons at risk of poverty in Romania (17.4 %) and, to a lesser extent, in Luxembourg (13.7 %) and Spain (13.1 %), while Greece, Italy, Portugal and Hungary each also reported that more than 1 in 10 members of their respective workforce were at risk of poverty in 2017. 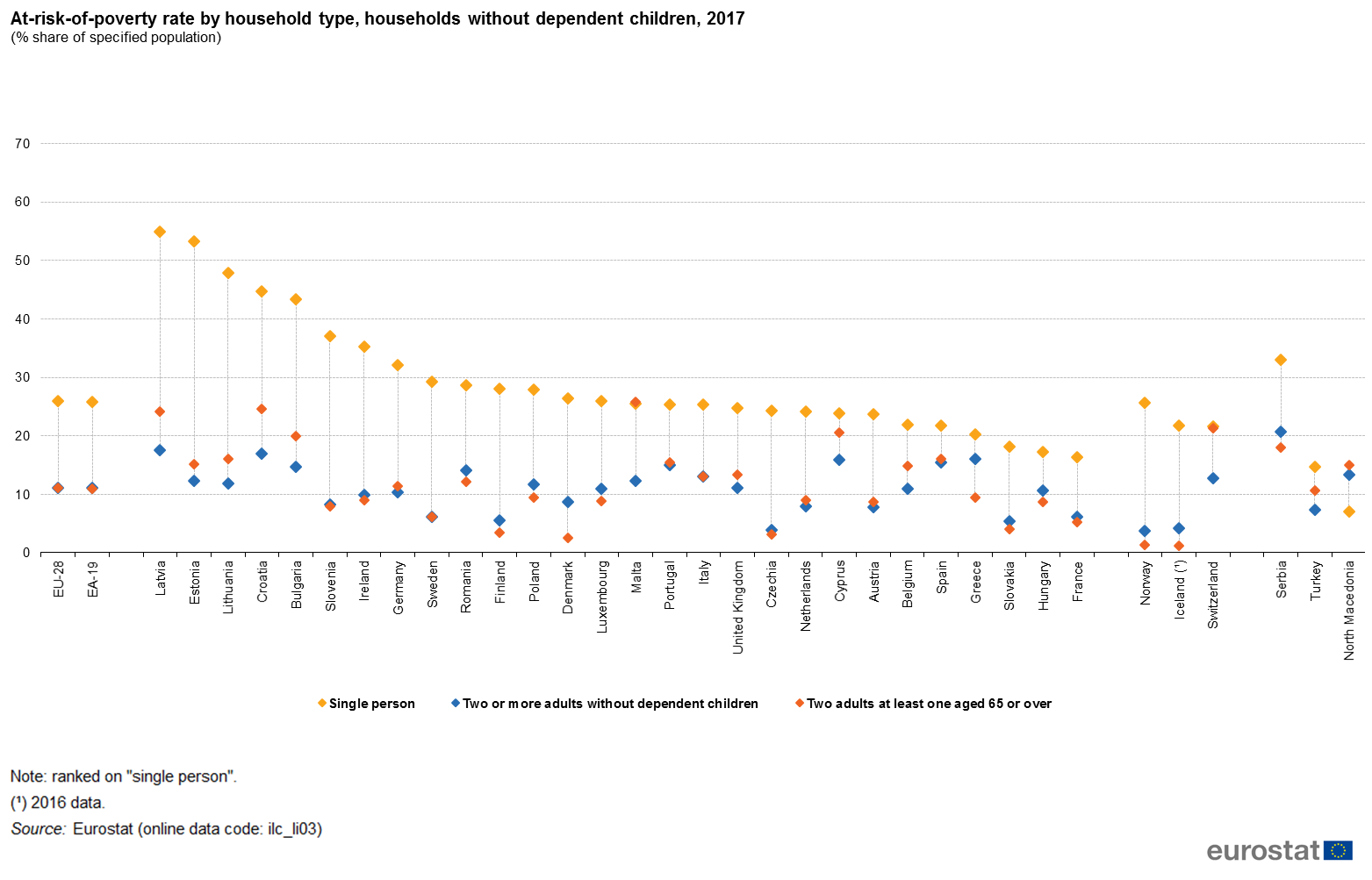 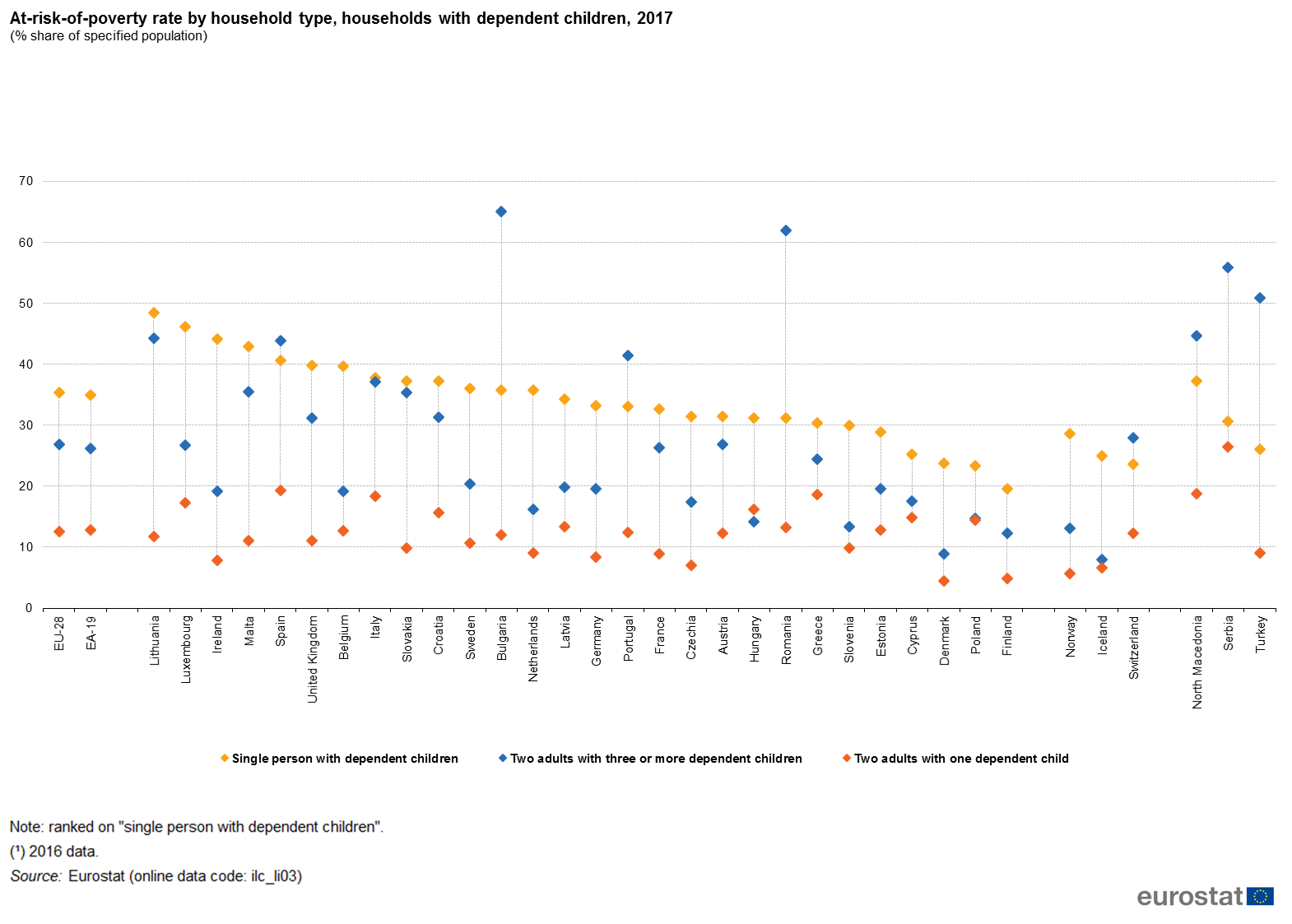 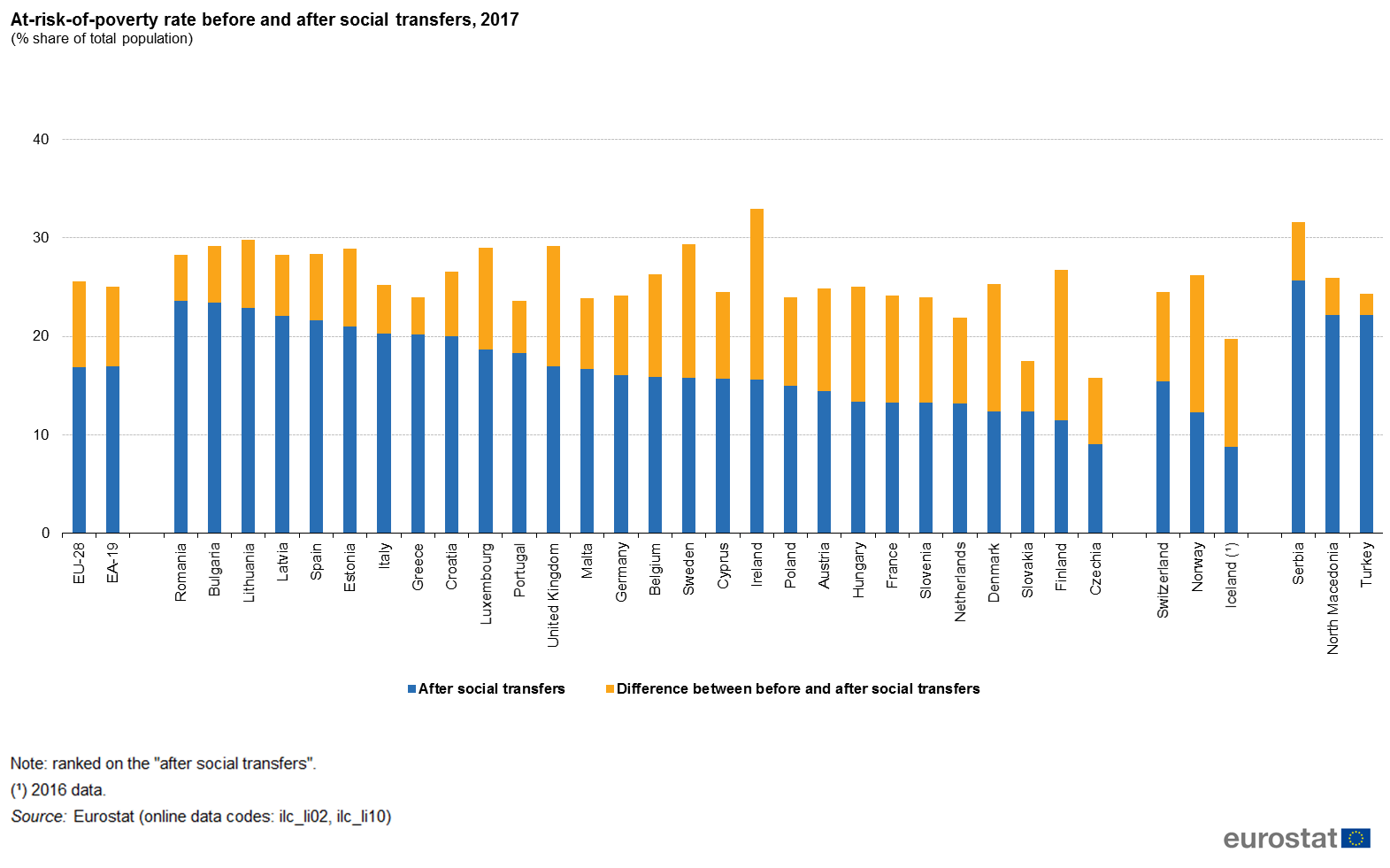 Looking at the impact in relative terms, half or more of all persons who were at-risk-of-poverty in Finland, Ireland and Denmark moved above the threshold as a result of social transfers, as was also the case in Iceland and Norway.

Governments, policymakers and society in general cannot combat poverty and social exclusion without analysing inequalities within society, whether they are economic or social in nature. Data on economic inequality become particularly important for estimating relative poverty, because the distribution of economic resources may have a direct bearing on the extent and depth of poverty. 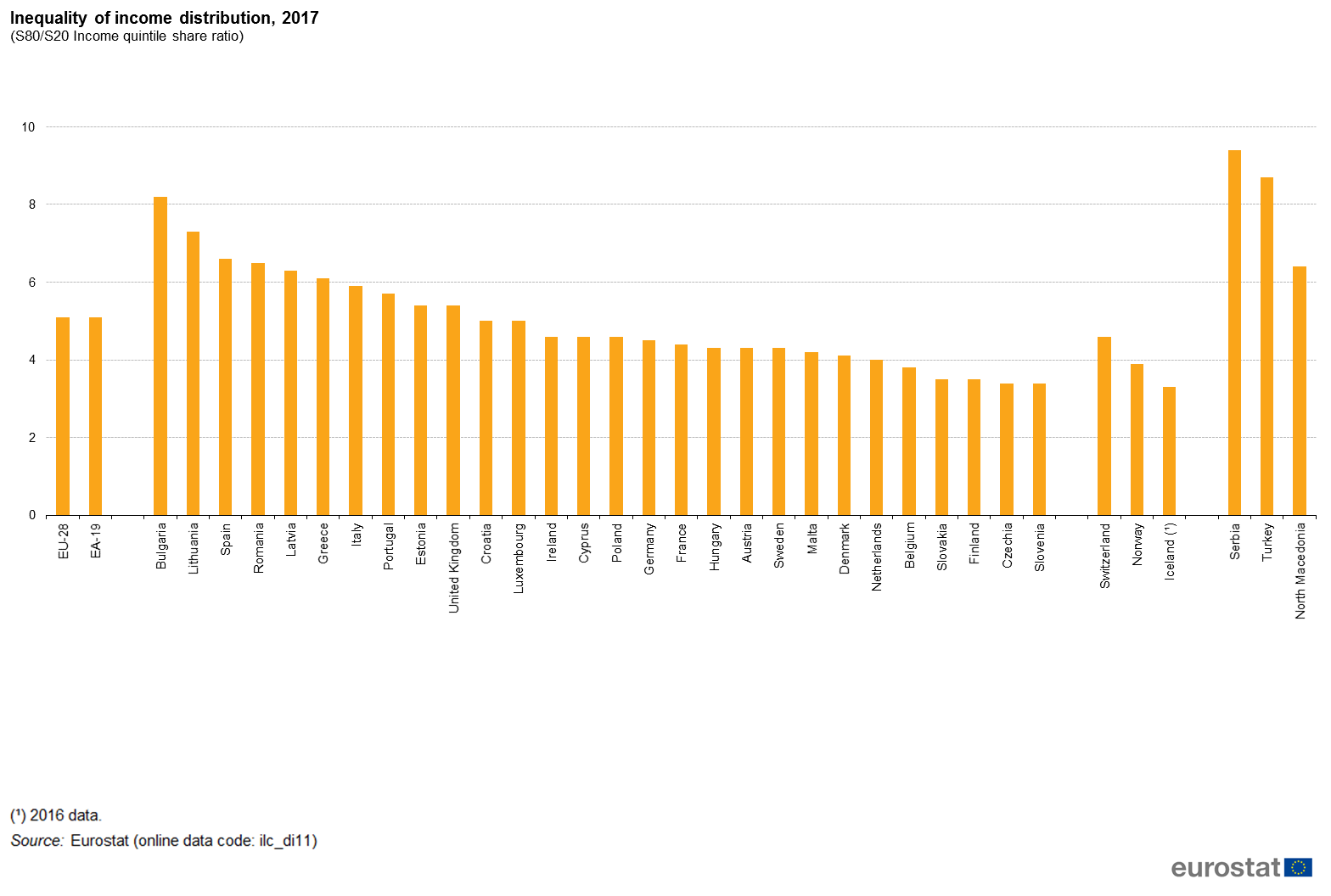 There were wide inequalities in the distribution of income in 2017: a population-weighted average of national figures for each of the individual EU Member States (see Figure 6) shows that the top 20 % of the population (with the highest equivalised disposable income) received 5.1 times as much income as the bottom 20 % (with the lowest equivalised disposable income). This ratio varied considerably across the EU Member States, from 3.4 in Slovenia and Czechia, to more than 6.0 in Greece, Latvia, Romania and Spain and more than 7.0 in Lithuania, peaking at 8.2 in Bulgaria. Among the non-EU Member countries shown in Figure 6, Iceland (3.3 - 2016 data) and Norway (3.9) also reported particularly low ratios for the inequality of income distribution, while in Turkey (8.7) and Serbia (9.4) the ratios were higher than in any of the EU Member States.

There is policy interest in the inequalities felt by many different groups in society. One group of particular interest is that of the elderly, in part reflecting the growing proportion of the EU’s population that is aged 65 and over. Pension systems can play an important role in addressing poverty among the elderly. In this respect, it is interesting to compare the incomes of the elderly with the rest of the population. 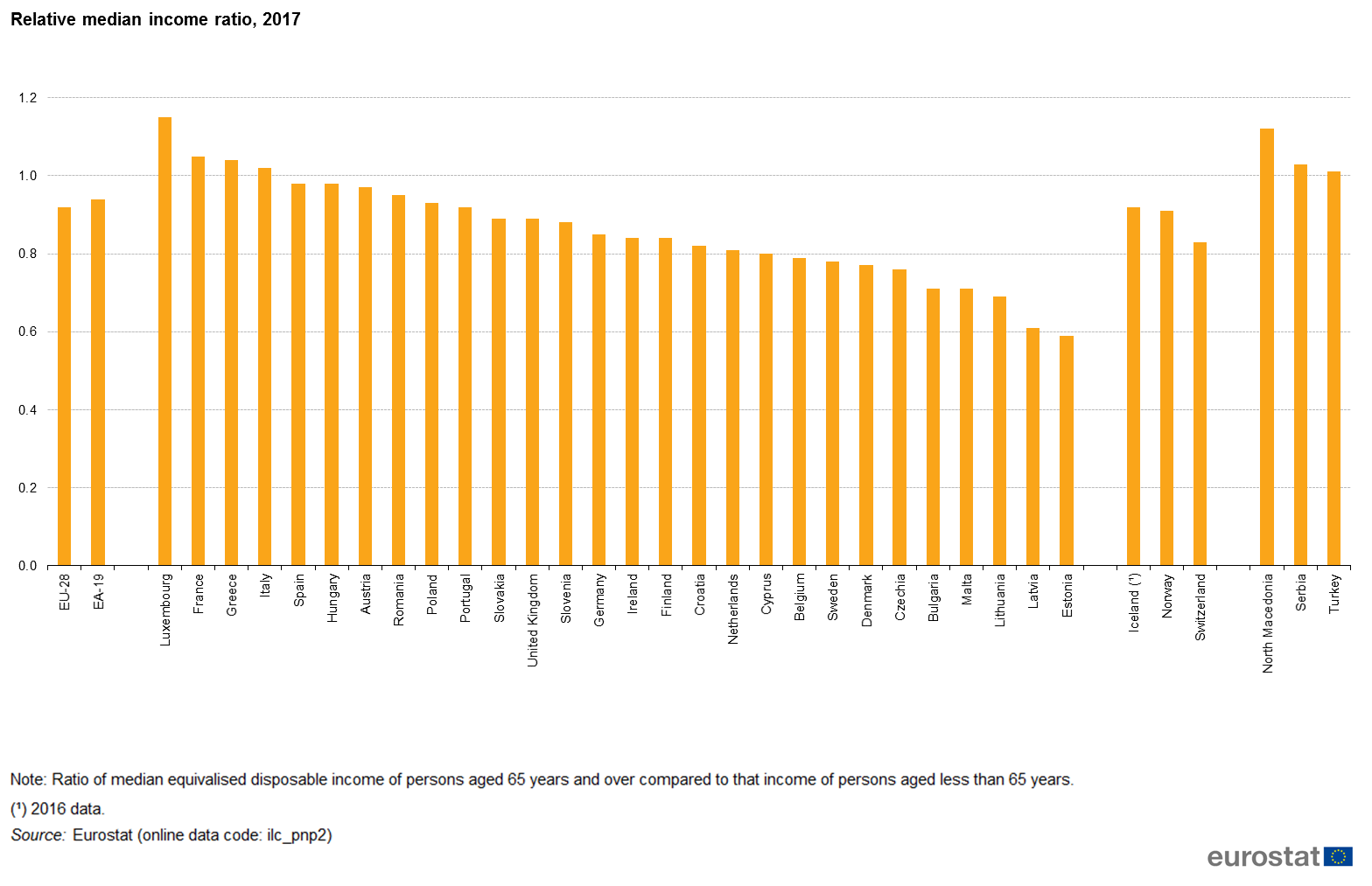 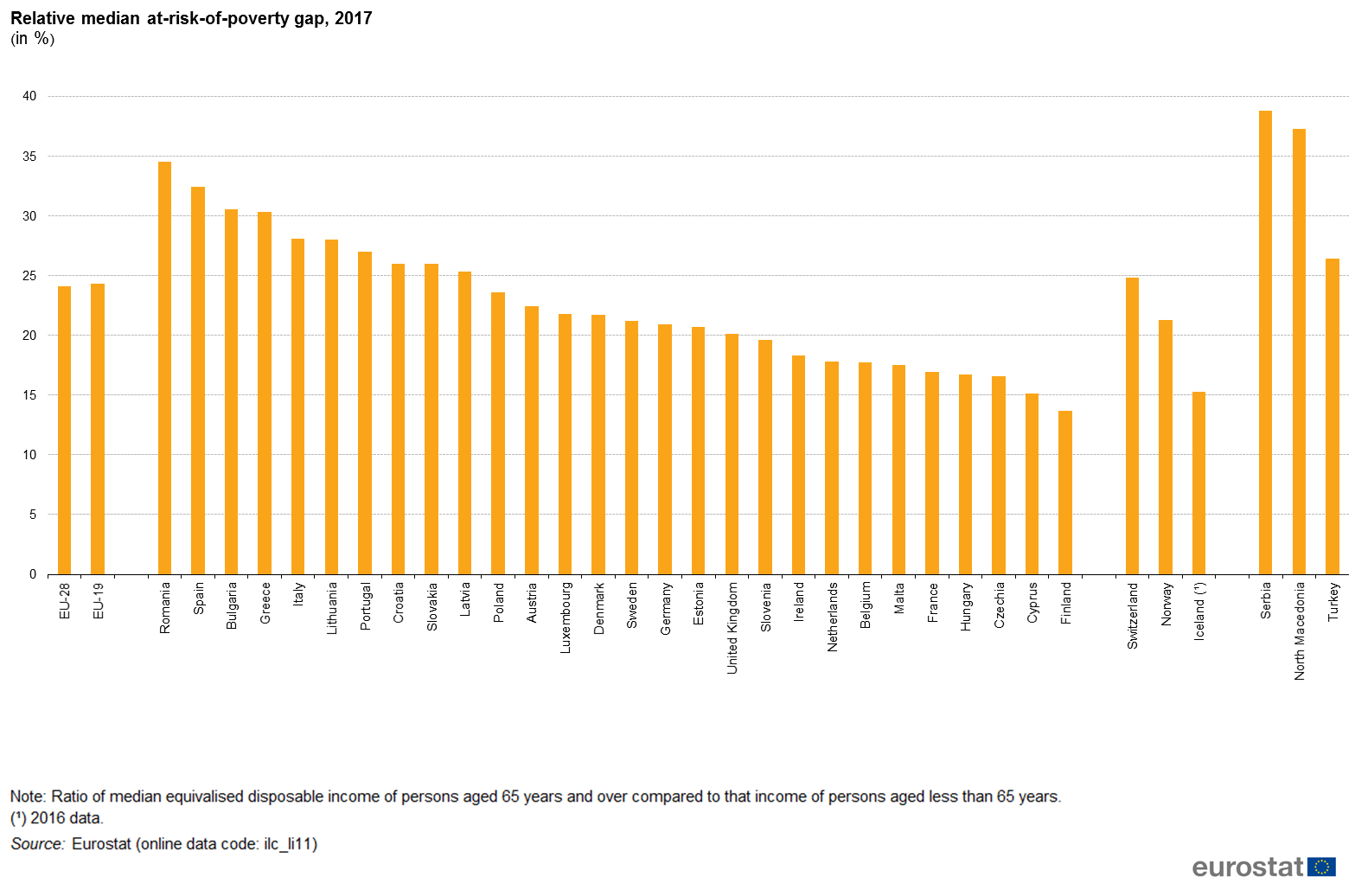 EU statistics on income and living conditions (EU-SILC) were launched in 2003 on the basis of a gentlemen’s agreement between Eurostat, six EU Member States (Austria, Belgium, Denmark, Greece, Ireland, Luxembourg) and Norway. EU-SILC was implemented in order to provide underlying data for indicators relating to income and living conditions — the legislative basis for the data collection exercise is Regulation (EC) No 1177/2003 of the European Parliament and of the Council.

The collection of these statistics was formally launched in 2004 in 15 Member States and expanded in 2005 to cover all of the remaining EU-25 Member States, together with Iceland and Norway. Bulgaria and Turkey launched EU-SILC in 2006, Romania in 2007, and Switzerland in 2008, while Croatia introduced the survey in 2010. Data for North Macedonia are also available since 2010 and for Serbia from 2013 onward. EU-SILC comprises both a cross-sectional dimension and a longitudinal dimension.

The at-risk-of-poverty rate is defined as the share of people with an equivalised disposable income that is below the at-risk-of-poverty threshold (expressed in purchasing power standards — PPS), set at 60 % of the national median equivalised disposable income. In line with decisions of the European Council, the at-risk-of poverty rate is measured relative to the situation in each EU Member State, rather than applying a common threshold value. The at-risk-of-poverty rate may be expressed before or after social transfers, with the difference measuring the hypothetical impact of national social transfers in reducing the risk of poverty. Retirement and survivors’ pensions are counted as income before transfers and not as social transfers. Various analyses of this indicator are available, for example: by age, sex, activity status, household type, or level of educational attainment. It should be noted that the indicator does not measure wealth but is instead a relative measure of low current income (in comparison with other people in the same country), which does not necessarily imply a low standard of living. The EU-28 and euro area data are population-weighted averages of data for the Member States.

EU-SILC is the reference source for EU statistics on income and living conditions and, in particular, for indicators concerning social inclusion. In the context of the Europe 2020 strategy, the European Council adopted in June 2010 a headline target for social inclusion — namely, that by 2020 there should be at least 20 million fewer people in the EU at risk of poverty or social exclusion than there were in 2008. EU-SILC is the source used to monitor progress towards this headline target, which is measured through an indicator that combines the at-risk-of-poverty rate, the severe material deprivation rate, and the proportion of people living in households with very low work intensity — see the article on people at risk of poverty or social exclusion for more information.