Tweet
Between 2010 and 2020, the number of single-person households without children increased by 20 % in the EU.
Tweet
In the EU, the number of people aged 15-24 with a medium or high education level and economically dependent from other household members increased by 8 % between 2019 and 2020. 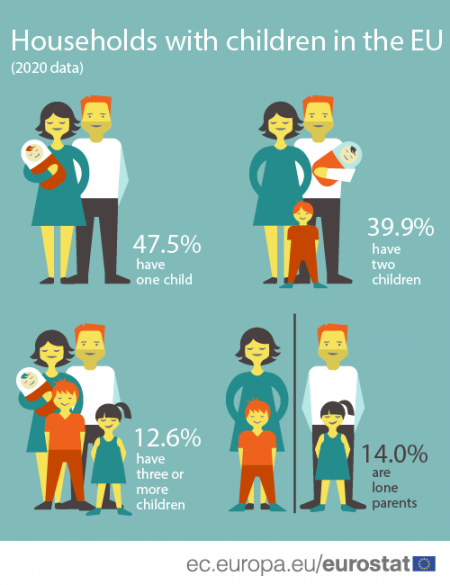 This article presents data on the development of households in the European Union (EU) and in the EU Member States during the past decade. It also reports at European level on the evolution of men and women living either as a couple, alone or in another type of household . The presence of children in households is also given special attention. Furthermore, the article focuses on the changes in young people's living situations between 2019 and 2020.

The statistics presented in this article are based on the European Union Labour Force Survey (EU-LFS), which is one of the largest European household sample surveys.

During the last decade i.e. 2010-2020, the total number of households in the EU increased by 7.2 %. In 2020, the European Union recorded 195.4 million households with on average 2.3 members per household. The largest average household size was recorded in Croatia (2.8 members) and in Ireland, Cyprus, Malta, Poland, Romania and Slovakia (all with 2.6 persons in average) while the smallest was observed in Sweden[1] (1.5 members), followed by Denmark, Germany**, Estonia and Finland (each with 2.0 members).

Between 2010 and 2020, only three EU Member States remained unchanged in terms of household size (namely Luxembourg, Denmark and the Netherlands). All other EU Member States recorded a decrease in the average number of persons per household. The largest decreases since 2010 were observed in Sweden* with the average household size decreasing from 2.0 in 2010 to 1.5 members in 2020, Latvia (from 2.6 to 2.2 members), Malta (from 2.9 to 2.6 members) and Estonia (from 2.3 to 2.0 members). 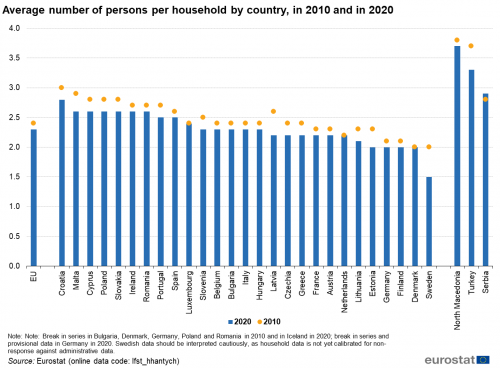 Figure 1: Average number of persons per household by country, 2010 and 2020
Source: Eurostat (lfst_hhantych) 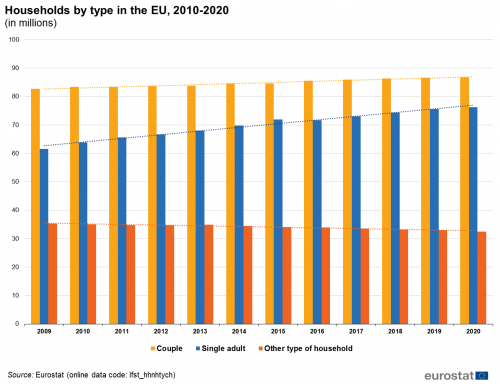 Figure 3: Households by type and presence of children in the EU, 2010 and 2020
(in millions
Source: Eurostat (lfst_hhnhtych)

Relative differences in households for men and women, young people and seniors

Looking at the increase in the adult population (see Figure 4), the development over the last decade shows different patterns according to age and sex. With regard to single adults, both men and women recorded a higher number of people living alone for all age groups in 2020 compared to 2010. The growth is higher than 10 % for all categories except for young women aged 15-24. For both men and women, the proportion of single adults increased faster than that of adults living in a couple. This last finding is observed for men and women of all age groups, apart from women aged 65 and more for whom a higher increase was recorded for those living in a couple (+14.0 % for single women aged more than 65 against +24.3 % for the same age women living in couple). In terms of gender, male adults living alone increased more steeply than female adults living alone, regardless of age group. Men aged 55-64 experienced the greatest increase in the period 2010-2020, with a 52.2 % increase. For comparison, women in the same age category recorded an increase of 25.2 % since 2010. Older men aged 65 and over living alone increased by 40.5 % in 2020 compared to 2010. The corresponding increase for women was 14.0 %.

Figure 4: Growth rates of the adult population by type of households, sex and age in the EU, between 2010 and 2020 (%)
Source: Eurostat (lfst_hhindws)

In addition to these developments, differences at EU level are also visible in the share of adults living alone, in a couple or in another type of household (i.e. with another adult but not as a couple or with several adults) according to the age group (see Figure 5). Around half of adults above 15 years old live as a couple (respectively 48.3  % of women and 51.9 % of men). Almost three in ten women and men lived in another type of household (respectively, 26.8 % and 29.1 %). Women living alone accounted for one quarter of the total women (24.9 %) while men living alone accounted for almost one fifth of the total male population (19.0 %).

In the context of the EU-LFS, children are those aged up to 24 years old, living with adults and economically dependent. Looking only the adults aged between 15 and 24 years (so those economically independent), the vast majority of men (72.1 %) live in another type of household (i.e. two, but not as a couple, or more adults) against 58.2 % of women. Another difference among young adults is that around one in five female adults aged 15-24 live as a couple (18.9 %) while it is the case for fewer than one in ten men in this age category (7.7 %).

Presence and number of children 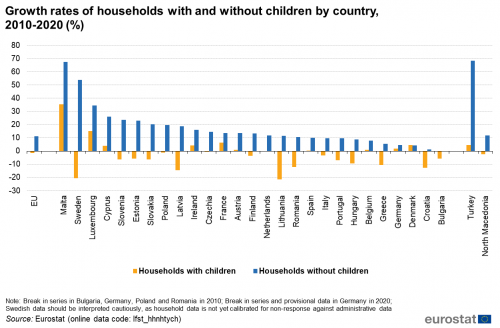 Figure 6: Growth rates of households with and without children by country, between 2010 and 2020 (%)
Source: Eurostat (lfst_hhnhtych)

The 2020 distribution of households shows that the share of households in which children live can vary considerably from one country to another (see Figure 7). At EU level, around three in ten households (28.7 %) include children. At the top of the scale, children lived in one third or more of households in Ireland, Poland, Portugal, Cyprus, Slovakia, Malta, Romania and Luxembourg. In Sweden*, Finland, and Germany**, children were found in less than one out of every four households. 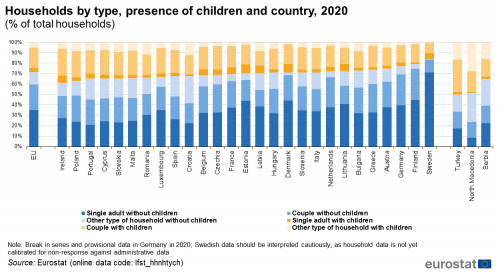 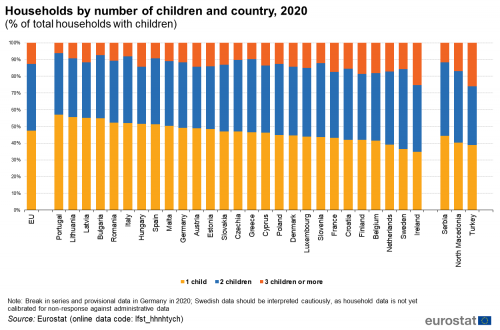 Figure 8: Households by number of children and country, 2020
(% of total households with children)
Source: Eurostat (lfst_hhnhtych)

Potential impact of the COVID-19 crisis on households

Looking at the changes between 2019 and 2020 data at EU level, the significant increase in the number of children aged 15 to 24 with a medium or high educational level attainment (as persons with full social and economic dependence of other household member/-s) is one of the most relevant findings. Please note that high education level refers in this article to tertiary education (levels 5-8) and the medium level to the upper secondary and post-secondary non-tertiary education (levels 3 and 4).

Figure 9 presents the evolution of persons aged 15 to 24 who attained a medium or a high education attainment level broken down by their household situation. It clearly shows that the children category was the most prominent category in 2020 including 41.2 % of those people against 38.3 % one year earlier in 2019 and that category significantly increased from 2019 to 2020 (+8.4 %) while the other categories decreased. For example, among people aged 15 to 24 with a medium or high level of education in 2019, the largest category was not the children, but the adults living in other types of households (accounting for 38.5 % in 2019 versus 37.7 % in 2020). In this case, it is assumed that people are socially and economically independent even living with other family members or other adults. This category decreased by 1.3 %. Furthermore, 12.8 % were single adults in 2020 against 14.2 % in 2019, reporting a decrease of 9.5 % in only one year. Adults aged 15-24 with a high or medium educational level and living as a couple accounted for 8.3 % in 2020 compared to 9.0 % in 2019. This category also decreased by 7.4 % over this one-year period. In comparison to the pre-COVID situation, these findings show that there were significantly more young people with a medium or high educational level who were economically dependent on and lived with other adults in 2020. 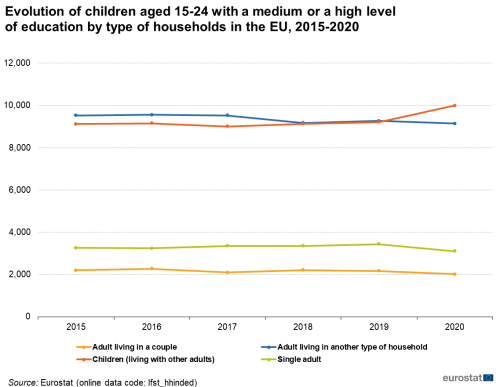 Figure 9: Evolution of children aged 15-24 with medium or high level of education by type of households in the EU, 2015-2020
Source: Eurostat (lfst_hhinded)

Source: All statistics presented in this article are derived from the European Union Labour Force Survey (EU-LFS). The EU-LFS is the largest European household sample survey providing quarterly and annual results on labour participation of people aged 15 and over. It covers residents in private households and excludes those in collective households. Conscripts in military or community service are not included in the results. The EU-LFS is based on the same target populations and uses the same definitions in all countries, which means that the results are comparable between the countries.

Definition: A child is defined as a household member aged less than 25 years and in full social and economic dependence from other household member/-s (parents / adults).

Country notes: (*) Data for Sweden should be interpreted cautiously, as household data is not calibrated for non-response against administrative data. (**) In Germany, since the first quarter of 2020, the Labour Force Survey (LFS) has been integrated into the newly designed German microcensus as a subsample. Unfortunately, for the LFS, technical issues and the COVID-19 crisis has had a large impact on the data collection processes, resulting in low response rates and a biased sample. Changes in the survey methodology also led to a break in the data series. The published German data are preliminary and may be revised in the future. For more information, see here.