In the second quarter of 2021, when compared to the same quarter of 2020, the number of housing transactions increased in 10 out of the 11 EU countries covered. 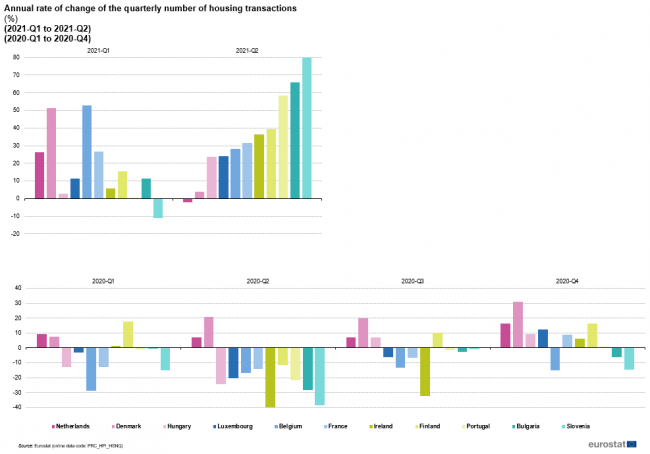 This article covers changes in the total number and value of dwellings (both new and existing houses and apartments) sold to households. Quarterly and annual figures on the number of housing transactions are presented for a subset of EU Member States that provided data covering at least the period from 2018 to the second quarter of 2021. Annual figures on the total value of transactions are presented together with house prices for the euro area.

In the second quarter of 2021, when compared to the same quarter of 2020, which was the most impacted by lock-down measures in the EU countries covered, the number of housing transactions increased in 10 out of the 11 EU countries covered. The highest increase was observed in Slovenia (+80.2 %) which had recorded the second largest decrease one year before. A decrease was only observed in the Netherlands (-2.1 %). 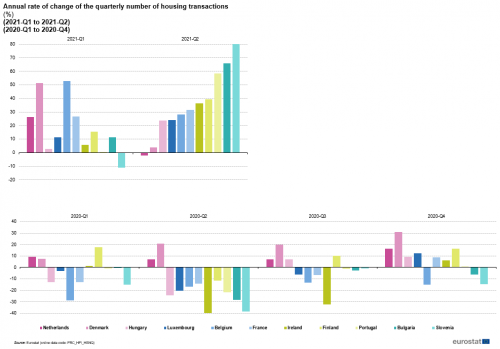 The drop in the number of transaction can be linked to COVID-19 lockdown measures, in particular in the second quarter of 2020, which included a temporary suspension of real estate activity.

Number of housing transactions: share of each quarter in the year

House sales statistics are sent by Member States to Eurostat on a voluntary basis. This explains why only a subset of EU countries send their data to Eurostat.

Depending on the tables, between 13 and 21 EU Member States, as well as the EFTA country Norway and the United Kingdom, report data. It is expected that progressively more and more country data will become available.

Annual and quarterly tables reflecting the number and value of housing transactions are available:

Due to missing countries, the EU (EU-27) and euro area aggregates are not available in the online tables with house sales statistics, but for the purpose of this publication, in Figure 3, the change in the total annual value of housing transactions for the euro area has been estimated based on data available from 15 countries representing 70 % of the euro area GDP in 2019 (GDP at market price expressed in purchasing power standards as available in table NAMA_10_GDP).

Figure 3 also shows, for the euro area, the annual rate of change of house prices available in table PRC_HPI_A.

Statistics on house sales and house prices sent by countries cover the same statistical universe: namely the transactions of new and existing dwellings (apartments and houses) where the buyer is a household.

In addition to house price statistics, house sales statistics are important to policy makers to have a more complete picture of the residential real estate market.

House sales statistics are sent by countries to Eurostat on a voluntary basis.